Director Ian Pons Jewell has become somewhat of a mainstay on Directors Notes since we first featured his work three-years-ago. Regularly joining us to discuss his impressive music video work, the UK-based director is back for his fourth DN interview, this time discussing working with Lily Newmark and shooting on 35mm for his Art Fund – Miss Nothing commercial.

How did you get involved with the ‘Art Fund’ project and where did the inspiration for the concept from?

101 London reached out to FRIEND and asked if I’d be interested. I loved the brief immediately, it had such a tight and kooky script. Really stripped back, no waste. It’s written by Joe Bruce, the creative at 101, his inspiration and motive being to create this really interesting visual journey through the art in London galleries. The only thing missing was a character for me, so I suggested we actually follow a person and their experience of the art, interacting with it. I immediately thought of Lily Newmark for this, and she really added to the tone of the whole film.

The piece manages to pack a great deal of warmth of humour into its short run-time, how important do you feel this is in its success?

Incredibly important I think. I love videos and commercials that have heart, if it’s sincere, so I strive for this always. A lot of this is something that Lily brings, especially the kookiness of her character in it. There was a very particular tone for the comedy that I could feel from the first look at Joe’s script, so it’s something that I aimed to keep as pure as I felt it on that first read. With the addition of Lily, it just grew stronger. Rina Yang, our Cinematographer, also played a huge part in this. There’s a real natural feel and warmth in the images she captured, but they also don’t feel too realist. Tom Hollander’s voice gives it a lot of this warmth mentioned before, it acts as a sort of caring guide to Lily’s character, even apologising to her at one point. I particularly liked this relationship they have to each other in the film.

As you’ve mentioned, the film features the unmistakable vocal talents of Tom Hollander and the on-screen presence of Lily Newmark, how did you get them involved in the project and what do you think they both bring to the film?

Tom was reached out to by 101, so it was incredible to hear that he was interested. Wonderful to work with in the studio. I worked with Lily before in our Rejjie Snow video for Blakkst Skn and had been waiting for another opportunity and this felt perfect for her. The character was created with her in mind, it wasn’t that I was working out who to cast for the character as she didn’t exist beforehand. I imagined Lily when I felt it needed a person in the scenes.

For a film about art, I’m assuming you put a great deal of thought into the aesthetic of the piece? Why did you decide to shoot in 35mm and what did this mean for production?

I thought as much as I would for any other piece to be honest but there was a definite motivation from the art perspective for the aspect ratio. Due to us showing paintings and photographs, I felt that 4:3 made for a really nice frame, in the filmic sense but also in terms of the hanging variety. It turns the image into something you look at differently, with the intention of seeing each frame as a painting or photograph in the same way you would when admiring work in the museum. It’s the cinematic artform capturing artforms of other mediums, and this 4:3 ratio pushed this idea more. 35mm was then on our wishlist, it just felt right. I’m not sure how we managed on the budget but Lauren Havard our Producer was a magician. Due to it being a charity, we didn’t have a big production budget basically. Our Co-Producer Siobhan Daly was also incredible, along with great support from FRIEND in making it all happen.

It’s never flat or too clean. It’s as if there’s always some sort of weather in the scene’s she shoots. 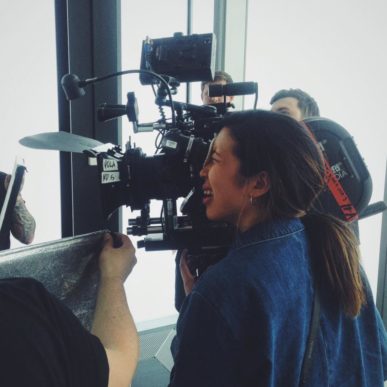 You enlisted the ever-impressive talent of Rina Yang (I love her work) as DoP, what do you feel she added to the aesthetic you had in mind?

She added a lot, the warmth you mention being one of those things. I’d wanted to work with her for a while, having also heard great things about her as a person and on set. Rina’s work has a very special texture to it, it’s never flat or too clean. It’s as if there’s always some sort of weather in the scene’s she shoots… fog, rain, dust, humidity. I love this about her images, amazing texture, they’re very special. Then of course her use of colour. I’m not a fan of hyper colour palette design stuff as it can remove the humanity to the characters but Rina uses colour in a way that adds it. It works for the narrative, they give more clues to the emotion, and also on a superficial level the images just look beautiful. So this was also something I loved with her work and knew that despite the very designed camera work and symmetrical framing, she would keep the humanity and heart in the film.

I have two commercials I’m really proud of coming out soon, both in post. Then a music video too, which I think I told you about ages ago but only just managed to make it. I then have loads of ideas and dreams and intentions which I won’t talk about at the risk of jinxing them and / or looking like an idiot come next year if I’ve not done any of them. I just moved to Berlin though, so right now I’m sorting out my place there which is nice. Have lived out of a suitcase for just over 4 years since those videos in Bolivia, so it’s quite an exciting and surreal experience for me having my own spot. But please shoot me if I ever hang a “live, laugh, love” sign in the bathroom though.