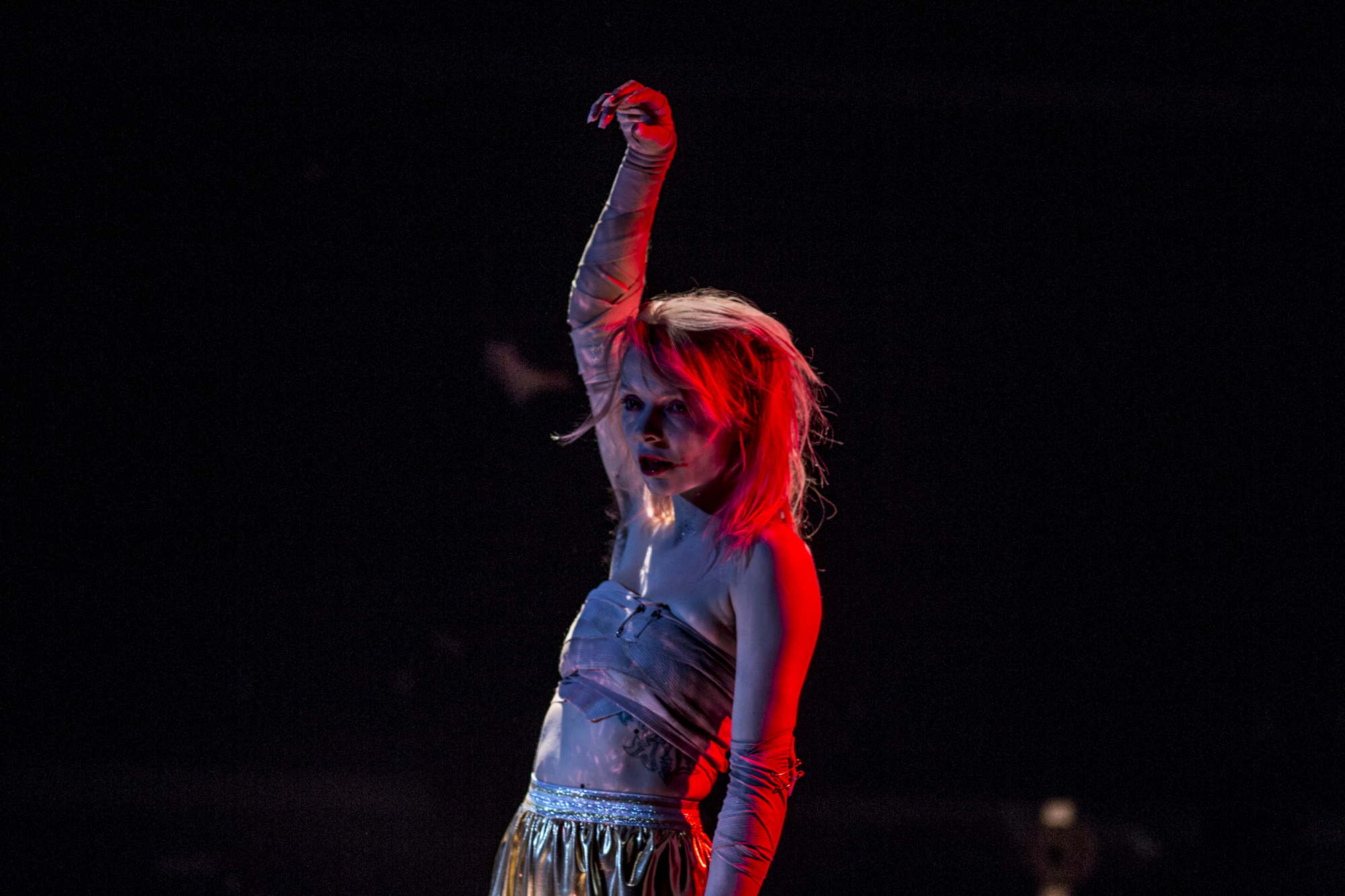 In a freakish spin cycle set all the way to demonic, Toronto artist Petra Glynt totally possesses Mitchell Stafiej’s pink hyperkinetic music video for This Trip – much like a whirling dervish ready to eat you whole. With our delicate sensibilities well and truly rattled, DN gathered up the courage to ask Mitchell to explain how he pulled off this continuously rotating, one-shot music video in camera without the assistance of any post effects.

I originally came up with the concept while I was driving from Montreal to Toronto with Petra. She played a rough mix of the song on the highway and it was so heavy and intense — super disorienting. And it immediately inspired me… I wanted to make something similarly disorienting and chaotic, but as special as the song. The song attacks you and I wanted the video to do that too. I don’t really know where the spinning came from exactly but it just popped into my head. I wanted it to spin on a camera lens’ axis.

I’m fascinated by long takes and I try to explore them in my fiction and documentary work so I just asked myself whether it would be possible to have full control over the speed of the spinning throughout the entire song without having to cut. I wanted the camera operator to dance around Petra as she performed – all the while the camera spinning at variable speeds. I like to give myself restrictions and limitations, and then work within those boundaries – it usually makes something pretty inventive.

The song attacks you and I wanted the video to do that too.

The biggest challenge was finding a rig that could accomplish what we wanted – a camera spinning on its lens’ axis. The first idea Cinematographer Étienne Lacelle and I had was to use a GoPro and tape it to a drill. It made perfect sense, but we soon found out that drills don’t have significant variable speed control. I bought some speed controllers from Ebay to see if I could control the spinning that way, but there were too many cables to work around and wouldn’t give us the mobility we wanted. The image looked fine, but we’d only have the fastest spin possible. We wanted a wide range. Kind of like dynamic range in sound, we wanted that dynamism in the image. Some sort of arc.

We were pretty stumped for a while and then locations kept falling through (we were about to shoot the video in our apartment)… we felt rather discouraged until Petra sat down and drew together some rough plans for a rig. It was really all her idea. The cool thing about her idea for the rig is that it was completely manual and gave us absolutely the full control over the speed we wanted. If you want to go slow, you just move it slow. If you want it fast, just spin it as hard as you can. It was actually pretty ingenious and I’m definitely not smart enough to design something like that. My dad is an engineer so we actually took the design to him and he made some adjustments and ended up helping us build the rig. It’s pictured below, but essentially we just velcroed a GoPro to the front of it. That wouldn’t be possible with any other camera… maybe a black magic pocket.

I love GoPros. I think their image is so unique. Just watch Leviathan, if you haven’t already. They also shoot incredible quality now. We shot it in 4K just in case we needed to crop for any reason later on (we didn’t). They’re also super versatile and for a video like this, which could end in disaster for a larger camera, there was no other choice.

Petra and our Art Director Kelsey Wilson decided to go all out with the costume. I had originally wanted something a bit more low key and grounded in reality but Petra was completely attached to the idea of being this other-worldly character or version of herself. So we went with that. The shoot took place on Halloween so it was kind of fitting that she would be this demon like character.

Petra and I are partners so that helped with the actual direction and having a rapport that worked. The way I generally work is to try and get people as comfortable as possible so I usually let them try out whatever they have in mind and then we scale it back or forwards. In this case I feel like we had to scale it back and keep it more contained. I wanted there to be an arc… something slowly building and then exploding in chaos. So we would watch the takes and then Petra and I would go through it together and see which parts needed improvement. I think she had a need to be very outwardly expressive and I was trying my best to contain it at certain moments so that we could have that narrative build up. But generally the way I work is I let the artist or performer ‘go for it.’ And then we take it from there.

The actual shoot took place in a massive Black Box in Montreal. We lit the video with two colored spots from above. They were controlled from a control board to have them dim and flicker. We also had 2 650s on the right and left of Petra. Finally, for the climax of the video, we had one strobe and another strobe gelled with pink in front and behind Petra. We also had a pink colored light stick that one of our grips would run around with when the camera is spinning incredibly fast.

While the concept made sense in my mind, we weren’t actually sure what we were going to get when we went to shoot. The GoPro doesn’t have a monitor and we weren’t using the app, so we just went in blind. Étienne couldn’t see what he was shooting so he had to guess where Petra was positioned in the frame. We rehearsed the movements a little bit, but ultimately he and Petra had to feel out the song and figure out what they were going to do in the moment.

It was a real dance between the two of them. It started off with Étienne on a skateboard, and then he hops off and starts to walk around her and get closer and closer and then things starts to devolve and distort and turn into chaos. Our grips would run in at times and toss glitter into the frame and shine lights on Petra, too. I wish we had filmed one of our takes from behind the camera – it was pretty hilarious.

We had these unknown variables that made the shoot so much more exciting.

We reviewed the footage after every take and they all blew us away – even the ones that didn’t work. There was something special about each one. The glitter exploding off the drum made us all gasp and we really had no idea what would happen with the strobe light. It made these imprints in the video! I had never seen anything like that. It looks like superimposition but it’s not. We had these unknown variables that made the shoot so much more exciting.

Since the video is a long take, the post-production process was super simple. Lay it out on the timeline… trim the opening… trim the ending… and then head into color correction. One issue we had was trying to figure out the best compression for uploading to YouTube and Vimeo. There’s so much movement in the image that YouTube and Vimeo compression cannot seem to grasp it. We ended up having to settle for the best we could do because we just couldn’t make it look any better. Most people won’t notice, but there’s some pixelation that frustrates me at times in the video.

In the end, the video took about a month to make… but we only had one production day.

I have a couple of films that are currently doing the festival tour. One is a fiction called A, about a musician who locks himself in his apartment on a dangerous bender. The other is a documentary about a friend of mine who grew up in a cult called The Devil’s Trap – it recently premiered at CPH:DOX. I’m also really excited about a documentary that I’m developing about industry and climate change in Canada. I’m trying to be far more outwardly political with my work than I have been in the past. Added to all that, I’m finishing up my graduate degree here in Montreal.

There aren’t any music videos coming up because I tend to be pretty picky with the music videos I direct. If I do one a year I am happy. They’re fun to mess around with and experiment with formal ideas. I have a few ideas but nothing that I’ve pitched yet.