It’s been less than two months since we mined the origins and creative processes underlying Bas Berkhout’s deeply insightful artist profile docs. However, after seeing the raw honesty Bas coaxed from Northern Irish artist, illustrator and writer Oliver Jeffers, we felt compelled to follow his lead and invited Bas back to DN for a deeper discussion about his fruitful working methods.

Oliver Jeffers’ work is instantly recognisable and adored the world over, did you already have a connection with the dual aspects of his career and his level of political engagement before the project? How did you come to create this film?

To start with the last part of your question: It was 2013. Marije, my Like Knows Like series co-founder, and I were researching potential subjects to shoot in New York. We stumbled upon a great video Mac Premo made about Oliver, and reached out to ask if we could feature him in a short doc. His reply was basically: “Yes, but I don’t want to talk about personal stuff.”

We all concluded that it wouldn’t be a good idea to proceed and make this film. Like Knows Like is all about personal stories. After that, Oliver and I kept running into each other in front of The Invisible Dog in Brooklyn. We were both working out of there. Last year, out of the blue, he asked: “Is your film offer still on?” So, I asked: “Why now?” And he said: “I only trust you to make a film about me in this moment of life.” I think that had to do with the film I had made about his best friend, Mac. We had also both just become fathers.

I didn’t know that much about Oliver, not about his personal background, not much about his art. So the notion of that duality came out during the interview. His political views shine though his social timelines, so I was aware of that.

How do you feel your parallel perspective as a relatively new father yourself shaped the approach you took with this film and helped establish a connection which encouraged Oliver’s intimate discourse?

I realized deeper into the process that we had more in common then I initially anticipated. We had a deeper conversation in his studio about what this film should be about and why he wanted me to make it. When Oliver told me about the concept of his new book, I got inspired immediately. Here We Are is a picture book made especially for his son, Harland. It reinforces some basic things Oliver’s parents taught him about the simple principles of humanity.

Raising a child, and how you go about that, is something I was dealing with as well. I made a photo book documenting my wife’s pregnancy, which I will give to my daughter whenever she is pregnant (hopefully in 30 years or so). I wanted to show her something that she could relate to when she is going though such an intimate life experience. I think Oliver is aiming for something similar with his new picture book, having me make this film. It’s basically documentation or a bit of legacy for Oliver’s son about becoming a new parent. When he said he was fine with me not holding back on personal questions, I felt the road was open to create this piece.

The film’s themes naturally mirror those expressed in Oliver’s new book, how pre-establish were your talking points going into the film?

There were no pre-established talking points, really. I roughly knew what I wanted to capture visually, but I had no idea what the story was going to be. I always intend to jump into a filmmaking process quite intuitively and naively. If I overthink it too much, I get stuck. I just go. I think in Belfast, I came to the conclusion that it should be more or less just about fatherhood.

It’s basically documentation or a bit of legacy for Oliver’s son about becoming a new parent.

Looking at just the one interview we did, I felt this film had three chapters. His childhood in Belfast, the themes in his art, and fatherhood. I was surprised how much was usable from the hour of interview. Usually, I end up with five usable minutes from an hour, but I was looking at fifteen minutes of great story that I could use. I thought, why not?

When we last spoke, we touched on the fact that these are largely solo productions. How do you manage your time and attention during a project?

I have been making a lot of solo films for more then 15 years so I think I’ve gotten used to it. It was super stressful in the beginning. Directing, shooting and making sure the audio was good. After a shoot, I’d come home with fried brains. Now, I think I try to work with the limitation and keep my head cool. Today, my big challenge is the amount of equipment I need to carry. I used to shoot a lot with a Canon 5D out of a backpack. Now it’s a Sony FS7 with Sigma Cine Zooms and a tripod or an EasyRig. When we get somewhere, I leave what I don’t need in the car and only bring a second lens, battery or card. 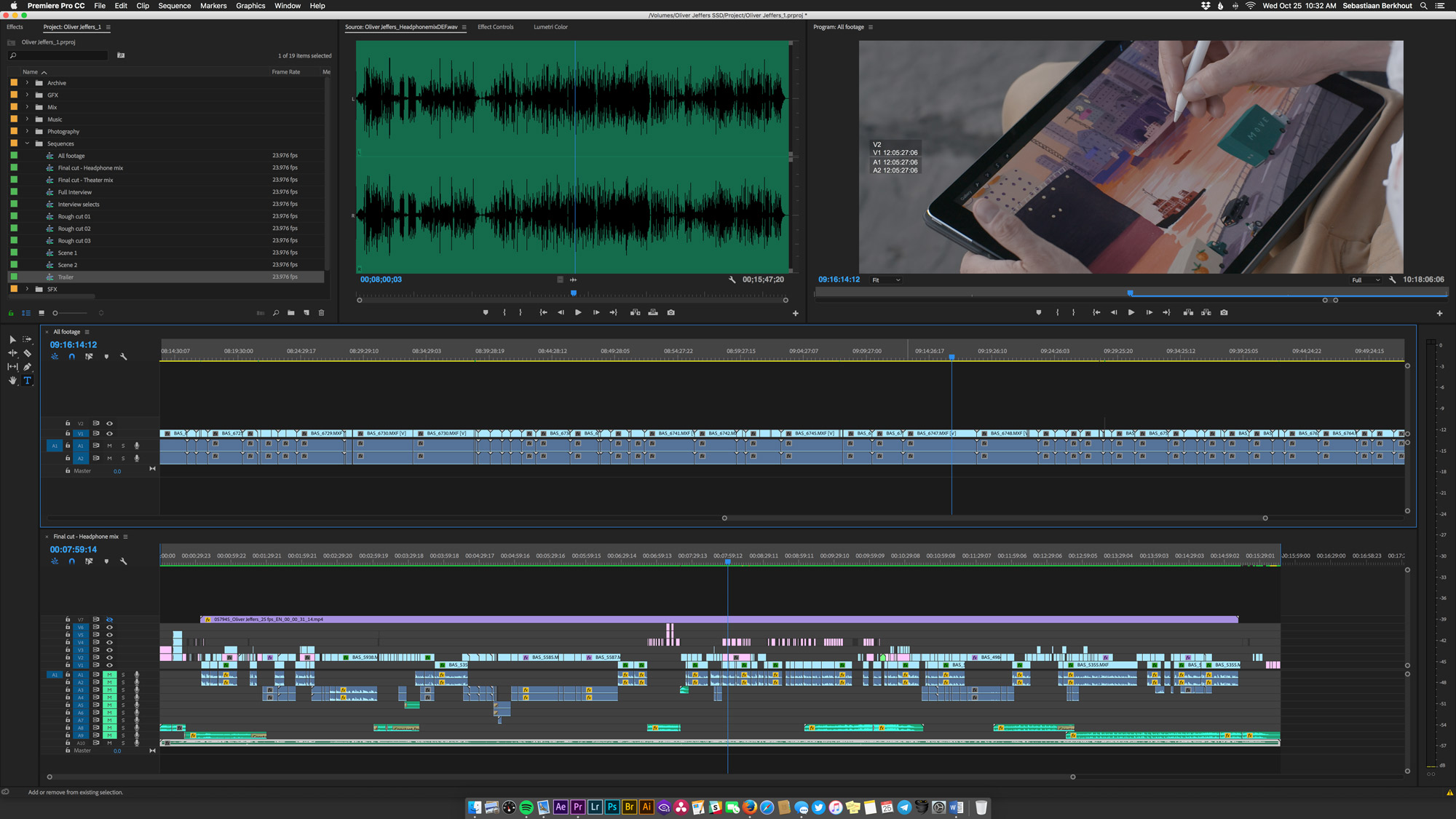 When it comes to post production, I try to work in a very structured way. I don’t know if it’s interesting or not, but I work with two timelines on top of each other. The upper timeline is all of the footage, and the lower one is the actual edit. This set-up allows me to quickly drag footage from the b-roll timeline to the edit.

Again, the film’s staccato sound design from Peter Stoel is dexterously crafted and blends seamlessly with the score. Could you tells us about how and at what stage the audio elements of the film came together?

Thank you. Peter and I have worked on many films together. I think he put all his love and knowledge into this one, which I’m very grateful for. I think he really likes the story too, so that helps (haha). I told him to please take all of the creative freedom he needed. Play and do your art. And he did. I cut these fast sequences in the film without any effects or audio guidance. He designed the majority of the film. I did select the score and sent him a film that was pretty much picture lock.

Is there an overall goal you have in mind for the work you want to create which you’re moving towards as you refine and evolve your techniques from project to project?

There are a few goals. I think the first is just to learn about humanity and people through the interviews. The second is to share and connect on a deeper level to get inspired. Meaning that other people’s perspectives can help to guide me through life. And lastly, to be able to move my audience with my medium, which is film and photography.

Will We get another film from you soon?

I have a few commercial projects going on until the end of the year, which includes a trip to Europe, but I am working on something special, an independent short film about a hunter who’s also a taxidermist and who lost his oldest daughter a few years ago. I randomly met him upstate.