Pushing against boundaries, and arguable at times common sense, the lead of Sam Icklow’s Untitled, L.A. acts out in an attempt to forge a self-defined path beyond the shadow of her older, more successful girlfriend. DN spoke to Sam about presenting a relationship drama which was simultaneously relatable and authentic to LA’s queer art scene.

What’s the objective behind nowMomentNow, the Berlin-based queer moving-image arts collective you founded with Imogen Heath?

nowMomentNow started as an experimental platform to create new work, connect with and support artists making work, and to build community in Berlin. Some of our first projects included producing Liz Rosenfelds Weimar-era inspired film series The Surface Tension Trilogy, who is now an active part of nowMomentnow.

Untitled, L.A. was written over the course of a weekend, how fully formed was that initial script?

I spent a lot of time tooling around with the script in the lead up to shooting, getting feedback, changing things here and there, then changing them back. Funnily enough, in the end I don’t think it really changed much at all. I struggled most with the character of Mike because I didn’t want him to be a cliché, so I was working to make his character as specific as possible. The actor definitely brought a lot to him as well.

I felt I knew the other characters before they were even words on the page. They weren’t based on any one specific relationship, but they were definitely inspired by dynamics I had experienced, observed, or felt, then I blended them or exaggerated them. I was interested in unconventional, complicated, surprising characters — choices and nuances I wasn’t used to seeing on screen. In the end I felt I knew them intimately, could write pages and pages of backstory for them. I remember wanting to keep shooting after we were done, their lives kept sprawling backwards and forwards.

Unlike Sarah’s roiling emotions the film takes a measured approach to its cinematography, what informed the shooting style and overall look of the film?

I worked with my DP Paul Canon closely to establish a very specific visual style. A huge starting point was Harris Savides’ work (especially Sofia Coppola’s LA films Somewhere and The Bling Ring). It was important to have lots of headroom, frames that showed the characters in their environments as much as possible. I was inspired by a lot of television at the time, especially the first season of Top of the Lake. That series is incredibly photographed. References also included a lot of photography and artwork from queer LA artists.

I was interested in unconventional, complicated, surprising characters — choices and nuances I wasn’t used to seeing on screen.

In terms of the production, we shot at a lot of friends’ places and had a small family-style crew. The biggest object was the camera, the original Red One. It’s amazing how well that camera holds up though — my colorist can testify to that! 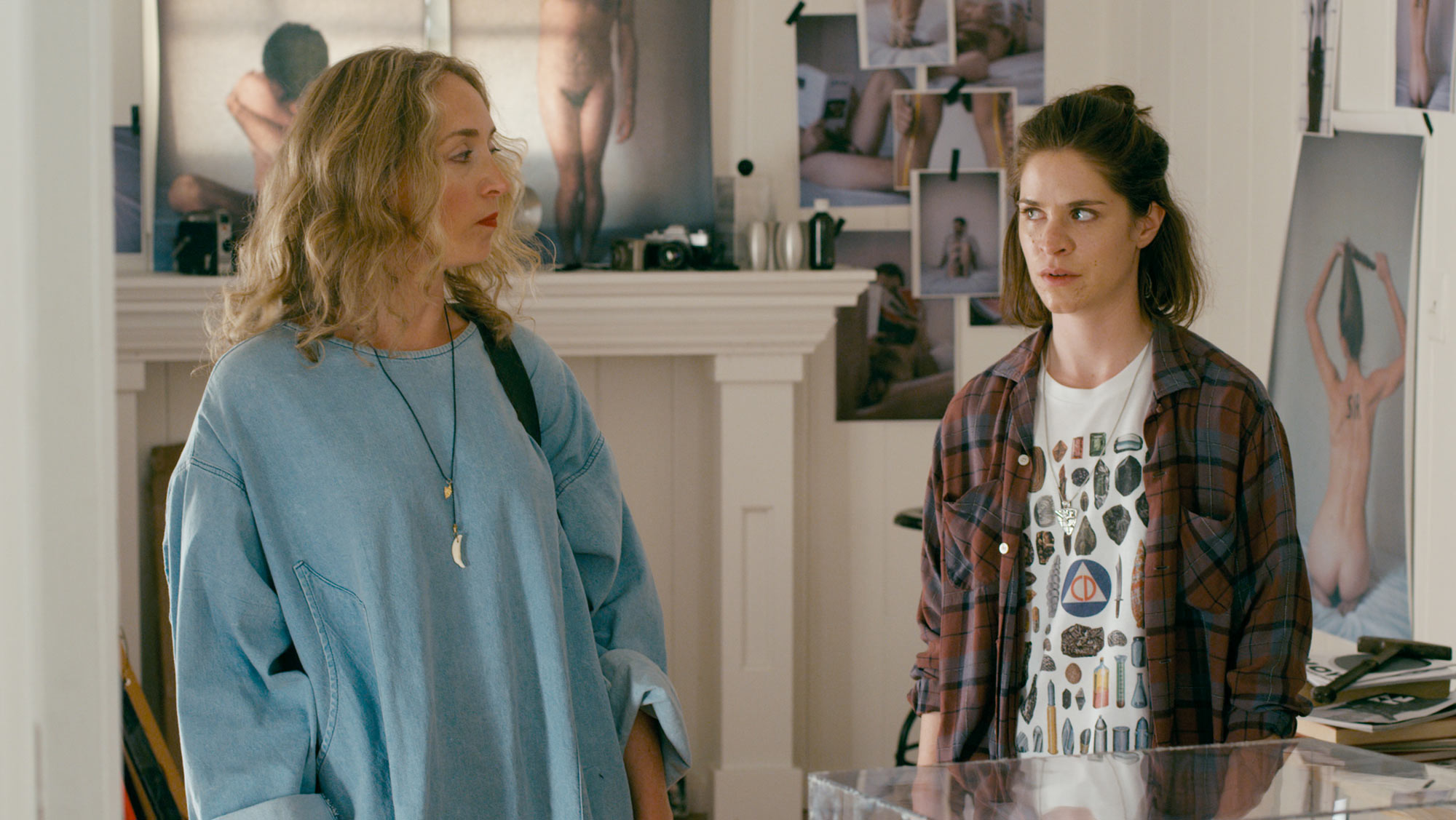 You’ve spoken of your desire to be “authentic to the queer scene”, how did that translate into the way you went about creating the film?

I worked really hard to make my actors feel at home in the subculture I was presenting. It was also really fun to shoot around LA and at friends’ places. A bunch of friends came to help and are in the karaoke scene, including the KJ, Amy von Harrington, who is an amazing artist and KJ in real life too. I think it helped the actors feel at home in the world. We (my actors and crew) looked at a lot of art from this community, my Costume Designer Marisa Suarez-Orozco was one of the co-founders of the store Otherwild (where I imagined a lot of the characters shopped or hung out). A lot of it just fit together like that.

There’s a potent air of unease in Mike and Sarah’s night time meetings, were there specific things you did to heighten that sense of disquiet?

Not really. We basically had to shoot the second car scene in one take — I didn’t even think we were going to be able to get any coverage, but thankfully we did. The premise was already so awkward, and the actors did such an incredibly real job of just working with that, and having fun with it, even though it is potentially quite uncomfortable subject matter. All of the work you put into making sure the actors understand the characters pays off in these moments. Sarah is such a fearless character. I think there was a concern the scene could have played in a kind of stereotypical or offensive way, but for me it’s so much more complicated than sex. It isn’t really about sex at all.

What can you tell us about new projects The Moth and The Stand In?

The Moth is the film I wasn’t able to shoot and so made this instead. I finally got around to making it and it is now on the festival circuit. It’s a ghost story set in Berlin, and is an adaptation of a short story written by the Australian artist and writer S.J. Norman. It echoes some of the same relationship dynamics as Untitled, L.A, but in a completely different environment, and with a horror element.

The Stand In, which is in post-production, is also a kind of horror, a bit more campy. It’s based on the book of short stories Actors Anonymous by James Franco, and was made in a class taught by him. It’s about a young hopeful being hired to replace a famous actor who disappeared from a film under mysterious circumstances. It’s mysterious and kind of Polanski-esque. Whoopi Goldberg has a cameo in it which is kind of fun.