A sumptuous tale of a man’s attempt to save the woman he loves from her coma by means of a dangerously experimental procedure, Adrien Lhommedieu’s sci-fi-romance Lila & Valentin uses meticulously crafted sets to dive into the labyrinthian world of hidden memories, fear and traumas. DN sat down with Adrien to discover how he and his team of collaborators stretched the limits of their resources to bring this metaphysical rumination on the nature of love and consciousness to screen.

It was great to see that DN alum Ben Briand’s Apricot was among your references for Lila & Valentin. Where else did you draw inspiration from and what impact did those works have on the story you wanted to tell?

At that time, I wanted to make a film about emotions and love but I had no characters and no plot! My strong influences came from Edgar Alan Poe’s poem A Dream Within a Dream, but also from different films I loved: Tree of life, Eternal Sunshine of the Spotless Mind and Inception. I wasn’t sure about the story until I watched two short films that helped me fit my ideas into simple concepts: Ben Briand’s Apricot was about memory and Keith McCarthy’s The Ganzfeld Procedure was about a scientific experiment. Those two ingredients became the core of my writing, a structure that was missing before.

Rewatching the film, it becomes apparent how actions are given new meaning with hindsight, such as Lila throwing water in Valentin’s face. Did you have in mind that audiences may want to return to clarify and recontextualise the film?

Some of these ‘dream’ effects were written in the script because I really wanted to immerse the audience into a world without any known rules. But on the other hand, the example of Lila throwing a glass of water into Valentin’s face wasn’t written! It was a brilliant idea from Editor Alexandre Dinaut.

If the characters believe in the world they are in, chances increase the viewer will too!

Create a “story in an imaginary world” sounds like a student pitch… so my first challenge was to make this world believable, and in my opinion it works through characters. If the characters believe in the world they are in, chances increase the viewer will too! The character of Valentin is ‘the audience’s eyes’ because he doesn’t know anything about this strange place. He only knows he loves Lila and needs to save her. 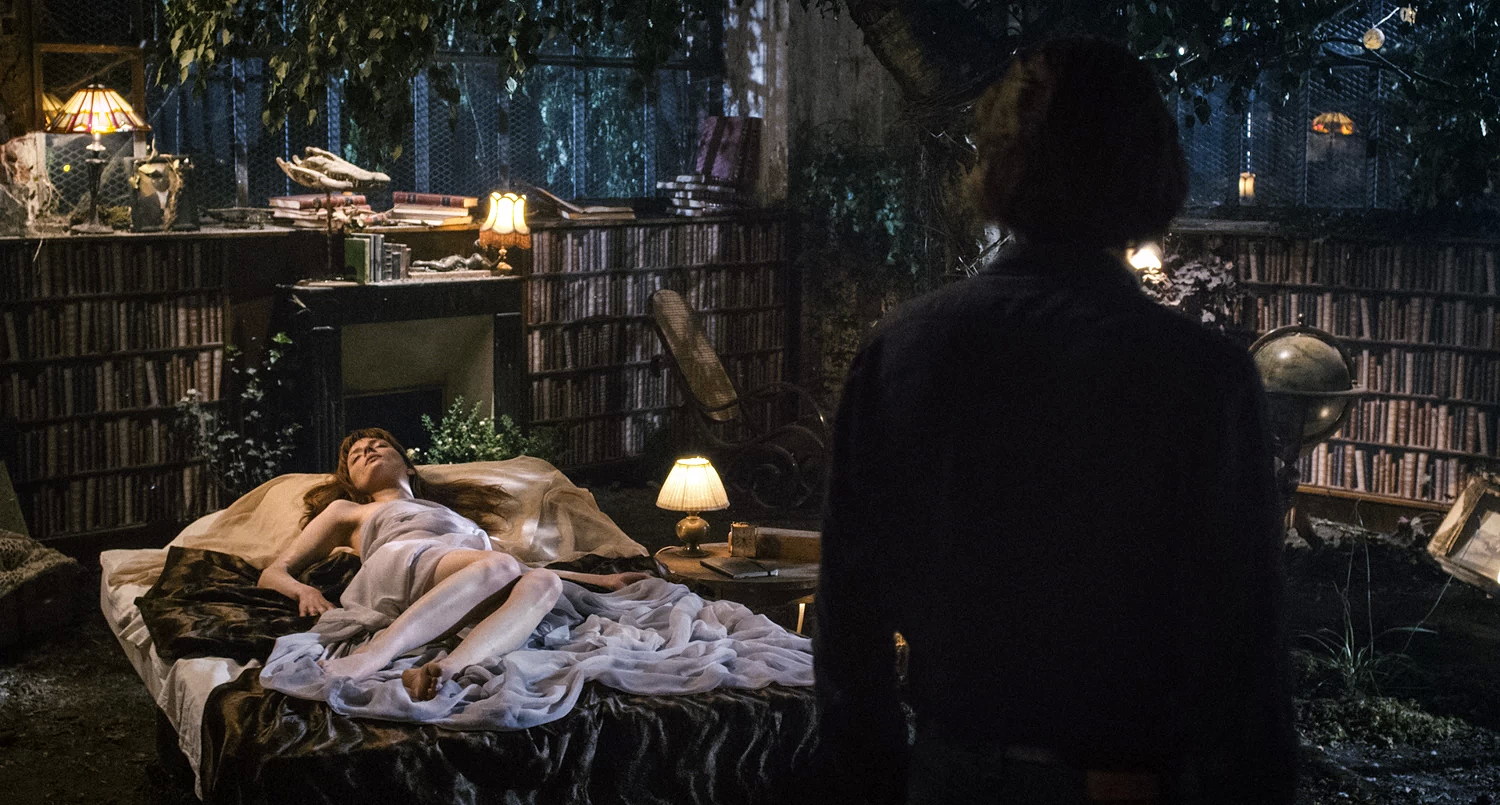 The more mature I get with my work, the more I trust the audience to understand complex story. People are intelligent. For me, complex doesn’t mean complicated, it means rich. I like films you can watch many times and still discover new things. If you say Lila & Valentin makes you feel like that, I’m a happy director!

Despite the budgetary challenges precipitated by this ambitious story you “prevailed over reason”. What were the major difficulties you needed to overcome to complete the film?

I really wanted to control the visual aesthetic of the film and especially to be comfortable in the filming process. That’s why we built almost all the sets on a sound stage. We were initially housed on the former Wallers Arenberg mine site (now Arenberg Creative Mine) and by a bathroom furniture manufacturing company called Herbaut for the second part of the shooting.

Then it was: sweats, sleepless nights, calories and bus loads of fresh trainees ready to do anything to live their filmmaking dream (or nightmare)! Many people offered their help to this Pharaonic project and it is thanks to the union of brains and muscles of all these people that we managed to build these 4 sets with a very small budget: Lila’s room, the clandestine laboratory, the bathroom and the library-room.

The most complicated thing was to build a tree inside a library transformed into a garden in an old industrial site. Yes, you can re-read the sentence …! A highly symbolic place, because it represents the sleeping soul of Lila, the heart of her inner world. I wanted something wonderful, which inspires that feeling of ‘ideal home’ that I dreamt of as a child.

For me, complex doesn’t mean complicated, it means rich.

With a very small budget and a very high visual ambition… the only way to manage a project is to involve people and ask for help. I’m truly grateful to every person who was involved in the making of this film. And convincing people to follow you on 13 free days of shooting… I think it was the 2nd most difficult challenge of this project!

The film’s production design is indeed fabulous, particularly that library-bedroom set. Given the freedom afforded by a story taking place in mind space, what guided the visual aesthetic?

Each set is in fact a projection of Lila’s memory. Her childhood bedroom mingles with her adult one to mix up moments spent with her boyfriend and conversations with her father. Her romantic bathroom overlooks a strange and threatening landscape. The car becomes oppressive as she takes control over the rain and brings back the painful memory of the accident.

All the sets materialize the journey Valentin has to cover to find Lila bring her back. But the last set of the film is the highlight of the young woman’s imagination. This library-bedroom embodies the essence of her mind. It is where she really is, where her conscience is asleep, fragile and vulnerable.

There’s a palpable connection between your tragic hero and his lost love. As we only experience their relationship through a shifting temporal lens, how did you ground that feeling into the actor’s performances?

We rehearsed a lot! Because I wanted the actors (Julie Prayez and Simon Dusart) to be very at ease with each other. I guess the most important thing in a love story is the love story! I could build any amount of impressive shots or sets… if the audience doesn’t believe Valentin loves Lila, what’s the point?

During prep, we talked a lot about the ‘emotional state’ each scene should be. It’s all about Lila’s mind. She’s out of control, she sets the mood. Valentin only tries to catch her, like a butterfly, and calm her down to get her back to reality. We worked on their relationship, their back story and their personality. But after this pre-work, I had to leave room for the actors to express themselves. That’s what happened during the shoot. We forgot everything we said before and just trusted our instincts.

You’ve spoken of your desire, along with DoP Stéphane Degnieau, to create your own language. What were the talks, tools and techniques you used to achieve that?

Stéphane and I are on the same human and artistic wavelength and to make a film together, it helps! We wanted to create a rich universe and a controlled color palette. The artificial, over stylised aesthetic came from a real desire to create Lila’s dream world.

I remember one day, I sent an e-mail file of about 500 photos of references to Stéphane! Just inspirations, frames to draw, interesting color palettes, ideas gleaned from everywhere. During a work session, he opened a small box and put two packs of photos on the table. He had printed everything I sent him! We put our favorites on a giant cardboard with, and we went to shoot, it was great. We had conceived a fertile creative ground in which to dive to get inspiration and create.

Also, one of the filming processes was to alternate between sophistication and spontaneity. I love these little sequences that you see when you go from one dream to another. They are like flashes of memories, pellets of emotions, inexplicable and addressed to our senses only… It reflects the ‘spontaneity’ side of the project. For these shots, we traveled the landscapes of the North and the Opal Coast looking for poetry. It was the complete opposite of the rest of the shoot, much more controlled.

What required the 13-day shoot to be broken into two parts, separated by a 6-month gap?

We needed to split the shooting into two because we couldn’t book people for too long. At the end, it was like we were producing two films. It doubles the energy required… And again, it is thanks to the people and staff involved in the film that we succeeded. We were a very united team, everybody wanted to see the film finished. Even if it was hard and on our free time, everyone accepted the challenge.

Composer Pascal Lengagne came to you by way of your crowdfunding campaign. What were the sensibilities you recognised in each other that made him a clear fit for the project?

When Pascal Lengagne contacted us, the film was still in pre-production. He had read the storyline on the crowdfunding page we had published and shared the same movie influences as us. We sent him the script. Here is his answer:

“Adrien, I’ve just read the script. I like it very much. Let’s meet in July [2013] to talk about what you want and we’ll see if I can be of any help. I’m up for it. Now, good luck for the filming. Put your soul in it. I’m sure it will be beautiful.”

Since then, Pascal and I have become friends. We’ve worked together on several projects. For Lila & Valentin, we used modern means of communication: we talked on the phone, on Skype and sent many emails to each other.

Just after having sent the script to him, I sent him my writing playlist. This film is special to me because it has been written, shot and edited with constant music. Without knowing it, M83, Ólafur Arnalds, Johan Johannsson and Jon Hopkins contributed to the making of this project. These artists happened to be among Pascal’s favorites too. The first versions he sent to us borrowed from all these influences to become the voice of the film.

We were looking for sober and minimalist sounds. The only exception was the song Wait by M83 for the two reunion scenes. This great and powerful song had been an obvious choice from the first lines of the script.

Pascal took on the project with an incredible energy, carefully concealed behind a quiet strength which makes up his great personality. The director, the production and Pascal had constructive exchanges. He offered different versions of his tracks so that we could choose the best during the editing. He reworked each new version tirelessly, and for this reason he became the third ultra-perfectionist element of the project with Stéphane and me.

There is a strange, captivating and scary world waiting for every director at the end of each film. Here we find ‘current projects’, ‘feature films in writing’, ‘almost signed TV shows’ or ‘short films in development’.

I call this world: Limbos. It needs a lot of fuel and energy to move forward through this magma! Fortunately, I still have a lot of energy until my next fiction, which should be soon I hope!