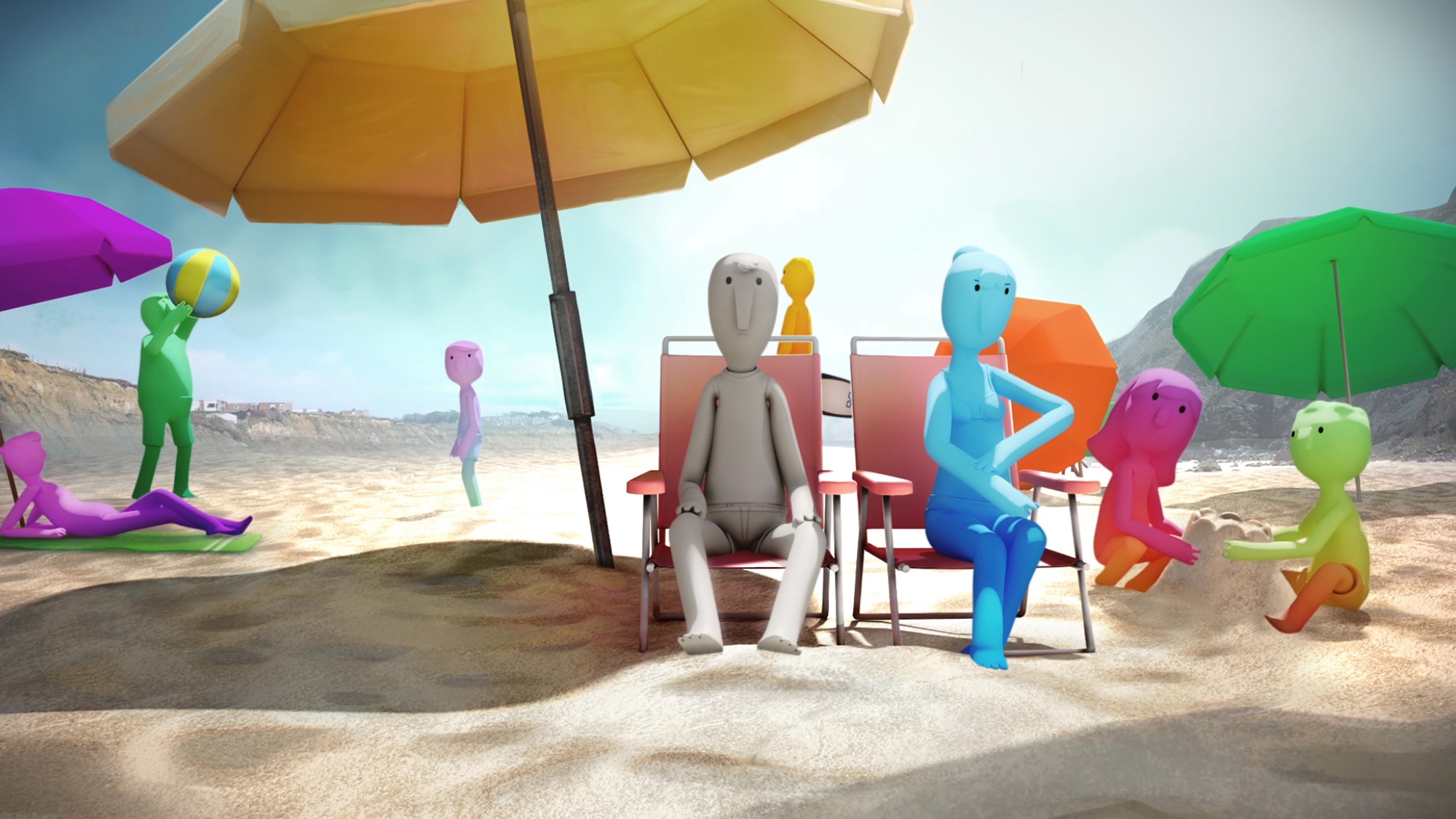 A truly collaborative project co-directed by advertising agency accounts man Simon Hewitt and Steve Smith, founder of renowned London animation studio Beakus, A Little Grey tells the bittersweet tale of a grey man adrift in a world awash with colour as he searches high and low for the elusive spark which will reignite his lust for life. Making it’s online premiere today following an award-winning festival run, I spoke to Directors Simon and Steve about the team effort behind A Little Grey and the importance of sweetening pathos with comedy.

It feels to me that A Little Grey taps into a middle aged emotional slump, rather than the full darkness of deep depression. Was there a particular catalyst which inspired the penning of this story? There are also several moments of humour despite the film’s melancholic thrust, how tricky was it to walk the line between the light and dark?

Simon Hewitt: I came up with the idea around the time I became a dad for the first time. And, as you’ve already suggested, the film is about that stage in life when you start to lose sight of what we’re supposed to be doing with our lives. All the things which used to bring joy like going out, meeting girls, playing sport, etc… don’t have the same effect that they used to and you start to search for a new purpose. And in this story parenthood is that purpose.

Steve Smith: This is something that attracted me to the film right from the start. I’ve explored issues with parenthood in my work before, and Beakus was even incorporated the day after the birth of my first child, so the alterations required in becoming a father are fascinating to me.

If no one watched the film because of its premise we’d have wasted our time!

SH: As for balancing the light and dark, we wanted to make a serious point, one that we hope lots of people can connect with, but we were conscious the film was going to feel very heavy and that wasn’t the original ambition, so we tried to lighten it up a bit and bring some ups and downs to help the story flow.

SS: It takes so much energy and commitment to make a short, especially outside of a funding scheme, so we felt we needed to make a film that was pleasing to watch, regardless of the somber narrative. If no one watched the film because of its premise we’d have wasted our time! 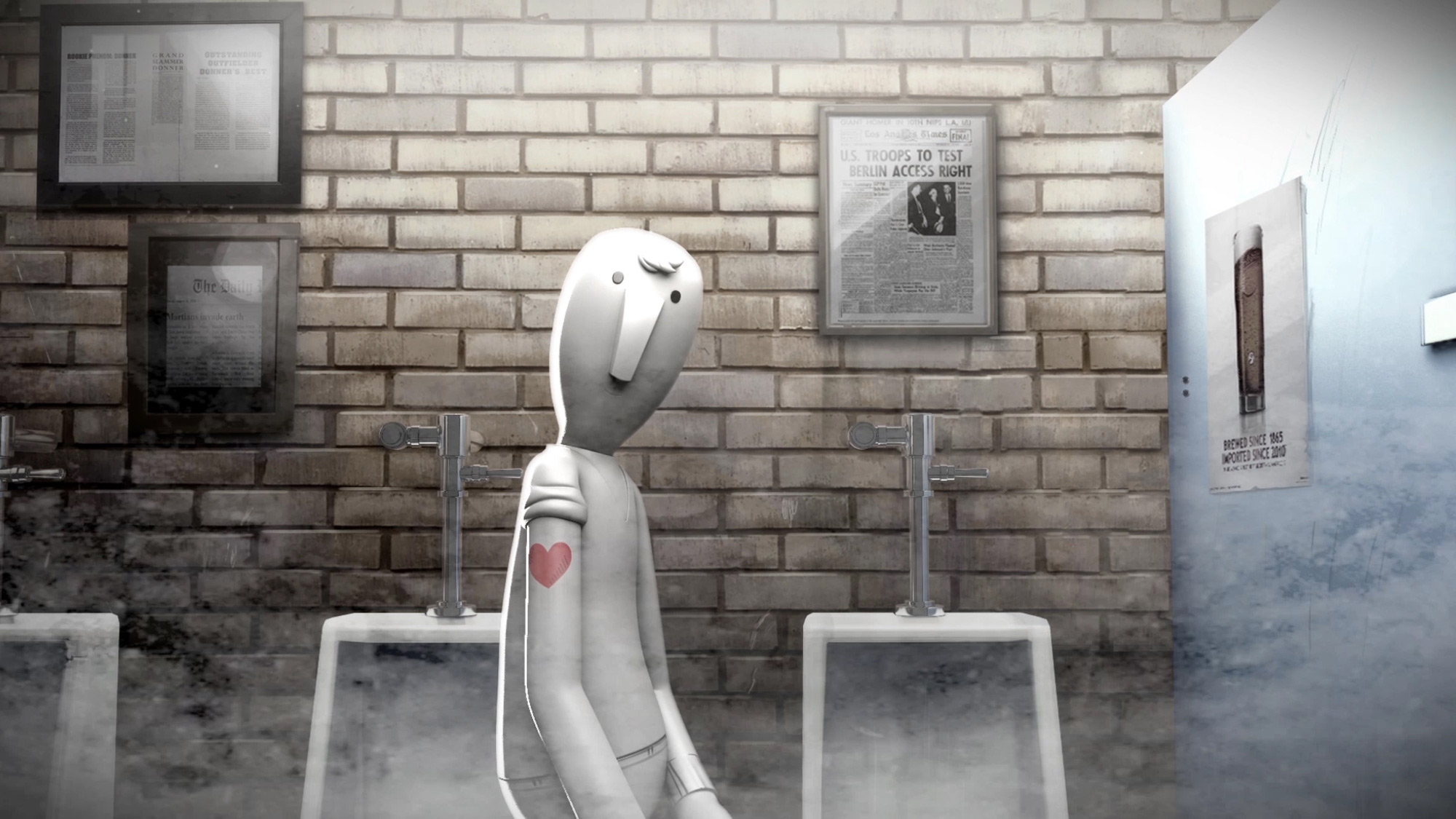 Even more so than most shorts, this was a collaborative project with shared roles across all facets of production. How did the team form and then delegate responsibilities?

SH: I came to Beakus with an idea and an ambition to make this film. But I knew I wanted help to sharpen up a very rough idea and that’s where both Stu Royall, a creative copywriter in the ad industry by trade, and the Beakus team, came in. With a load of experience in writing scripts and making short animations, Beakus worked with me to make A Little Grey the film it is. Then once we aligned on a script and a treatment they brought Mighty into play. Throughout the process we all shared feedback and consolidated it before then getting Mighty to action it.

SS: I think we enjoyed the pooling of talent. This wasn’t so much an auteur film but a meeting of minds. That’s quite normal in the creation of commercial animation, so it felt natural to me. We each bring something to the table. This film wouldn’t be like it is without Simon, Stu and I chipping in on everything.

Given the vast array of animation techniques and styles Beakus is adapt at, what about the 3D CGI work of Mighty made them the clear collaborative choice for A Little Grey?

SS: Simon knew he wanted a 3D CGI film. He wanted Grey, the lead, to inhabit a solid world that reflected our own, and give the audience an easy ‘in’. Our work is dominated by 2D animation, so this was a great opportunity to put Mighty to task. Their 3D work is phenomenal, and luckily they also liked the design style we were developing. It’s funny, because looking back there is no single designer on this project either. I remember sketching characters, from Simon’s reference cues, and then Mighty tweaked them, and then built Grey, and finally we had a design. It was very organic like that. Mighty are also a studio in their own right, and so they were able to bring talent beyond the stretch of our budget. We were lucky, in that respect!

With Mighty based in Mexico, how did you minimise the impact of working across international borders and time zones? Could you tell us how the team took the film from initial concept through to fully realised CGI short?

SS: We represent Mighty on our director’s reel, so we’re used to working with them across continents (they recently animated for us Yakka Dee!, a 20 x 5-min series for CBeebies). We have a great working relationship! They were keen to create the board, and so took our script and visualized the scenes. They also took a colour pass at it, to show the progression of tone and light. 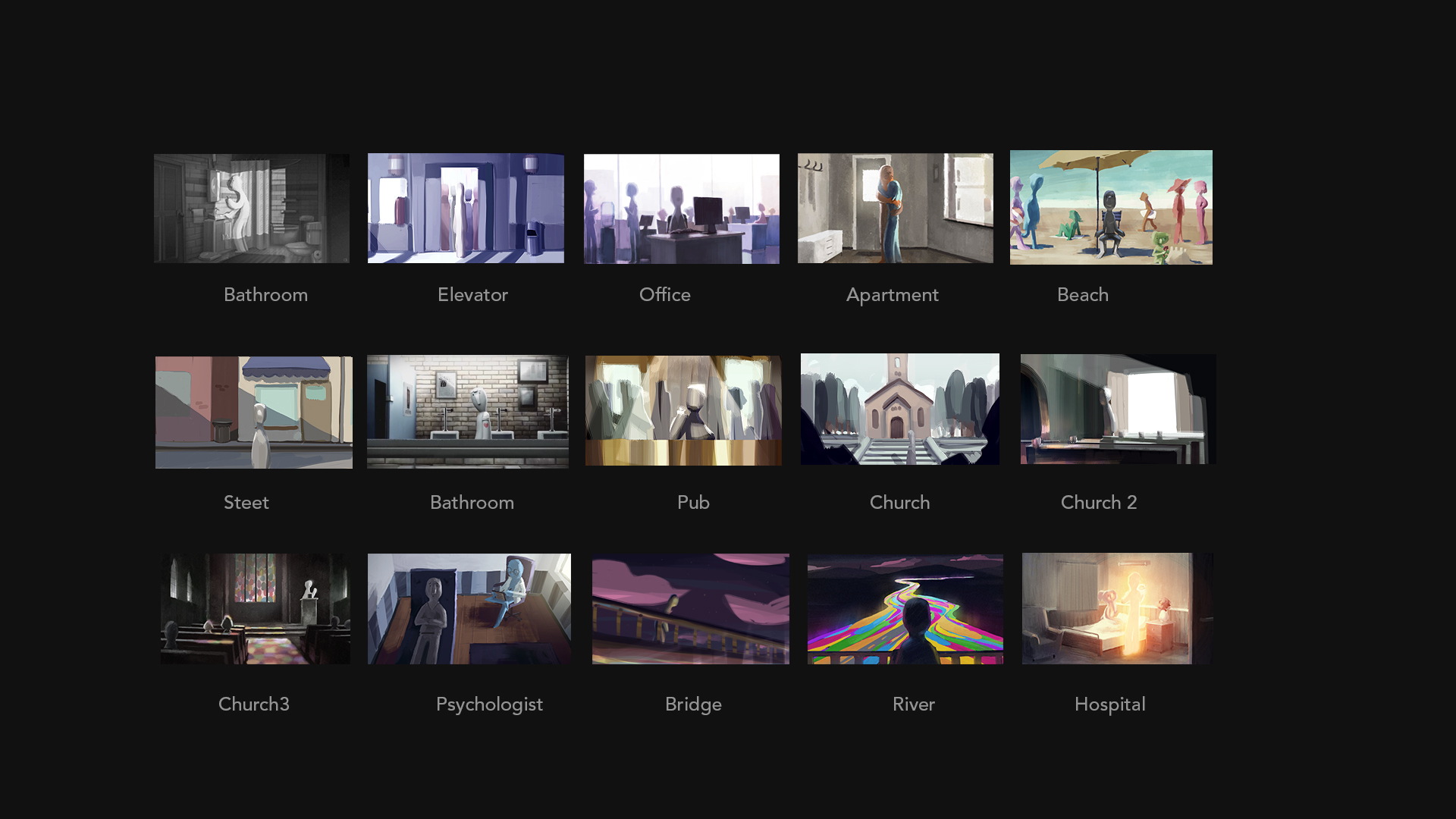 We always back-and-forth every element of production, until we reach consensus (otherwise known as sign-off!). The design happened that way too. This did take an inordinate amount of time, far far longer than any commercial project. We did actually start with a schedule, but it became apparent quite early on that this production couldn’t stick to a timeline because the parts were so disparate. All of us were working on other stuff all the time. But once you’re in, you’re in, and we kept coming back together when we could to see the progress Mighty had made. They animate in Maya, and we’d get playouts and fuller sequences as shots developed.

Perhaps the hardest thing was getting the tone consistent over such a long production period. Another challenge was ensuring Grey, the protagonist, acted with enough humanity. He isn’t a cartoon figure, and yet he looks like one, and he’s going through psychological stress yet has very few physical features to show it. So getting the balance between under-performance and a kind of clarity of emotion was very hard indeed.

We edited the voices in the UK, and I spent quite a bit of time editing the animatic to fit. We also vetoed a few scenes because they held up the story. We had beautiful sound design by Marian Mentrup, and he provided a sound bed to help us set the mood. Rendering was hard work because anomalies pop up in 3D work simply because you only render full-res at the end. So we had to do some grading and a lot of re-rendering, which is hard when you just want to see the finished film!

Aside from those rendering glitches you found yourselves reworking some of the scenes during production, why was that?

SS: The main story/structure issues were choosing how to show Grey going through just the right number and type of stressful situations. It’s easy to throw him in a place, add some weirdness, and enjoy animating his reactions, but in such a short film we had to be economic and boil it down. Plus if we dwelled on any one scene too long it would feel like that was the key scene, and we wanted to leave the film much more open to interpretation. He’s supposed to be quite a complex bag of emotions, so we hinted at things more than showed them outright, and that’s not easy to achieve in an animated short.

If I could, I’d make shorts all day every day. It’s an art form and should be respected as such. How have audiences reacted to this touching, but maudlin story as it’s made its way across the festival circuit?

SH: We’ve had a pretty decent run on the short film circuit over the last 18 months. The high’s are the 4 awards we’ve won at Manchester, Leigh, Wimbledon and Woods Hole (Nr Martha’s Vineyard in the US), plus nominations for Edinburgh International Film Festival and a few other high profile festivals, but the absolute highlight must be our UK premiere at the Barbican, where we were chosen to be the opening film at the London International Animation Festival. So I think this tells you that audiences have broadly reacted really well to the film.

It feels that since its inception 8 years ago Beakus has produced a continuous parade of projects, what new ones do you have on the horizon?

SS: We’ll be making more preschool TV series this year, which is a growing part of our studio’s output. More Yakka Dee! and more Olobob Top. At this point we don’t have any shorts in the pipeline but we always support our directors if they have anything in development. Rory WT has been carving quite a auteur niche in this area and we’re excited to see what he does next. Another big part of our work is creating promotional animation for museums, other public bodies, charities and non-profits – Amaël Isnard just completed a great film for a Documentary organization – and it’s rewarding to work with these kinds of clients, learning as we go what contributions they make to wider society.

If I could, I’d make shorts all day every day. It’s an art form and should be respected as such. I just wish there was more funding to support artists – I mean directors – in their short film making. And not just first-time creators, there should be funds open to everyone, as long as the ideas are the best. Anyone? ANYONE?