Not(e) for a Dreamer is a coming of age fashion film produced for Italian fashion brand M O N O – Y. The film fruitfully uses the changing of seasons as a reflection of the transition from childhood into adulthood with great elegance. I sat down with the award-winning Director Enrico Poli to find out how he painted the essence of a brand on screen so exquisitely.

What inspires you to work with Antonio Labroca and do you own any Mono – Y clothing?

Antonio and I have known each other for almost ten years now. We met in London in 2008, we were both working in an Italian restaurant in Charlotte Street and had no clear ideas on what to do with our lives. Our first project together was a short film entitled Closure, back in 2013. It wasn’t strictly a fashion film, but there was already great attention to aesthetics. Since then we’ve done two editorials, two fashion films and one music video together.

Working with Antonio on set is very reassuring, his sensitivity and professionalism can solve many problems of an aesthetic and practical nature. Overall, I would say that what inspires us to work together is the feeling of being on a common pathway. We’ve discovered and developed our artistic sensitivities together. To many extents, we’ve also inspired and supported each other to move forward in our respective careers. I would therefore say that when I work with Antonio it’s almost like working with an extension of myself, for artistically we complement each other. Every project is an opportunity to make a step forward in our lives and careers. Making a film becomes a means of exploring our purposes in life.

Ironically I don’t own any M O N O – Y clothing. I suspect Antonio doesn’t consider me worthy of wearing his creations. He is however quite committed to improving my look and style, so chances are that I’ll be able to wear his new collections! 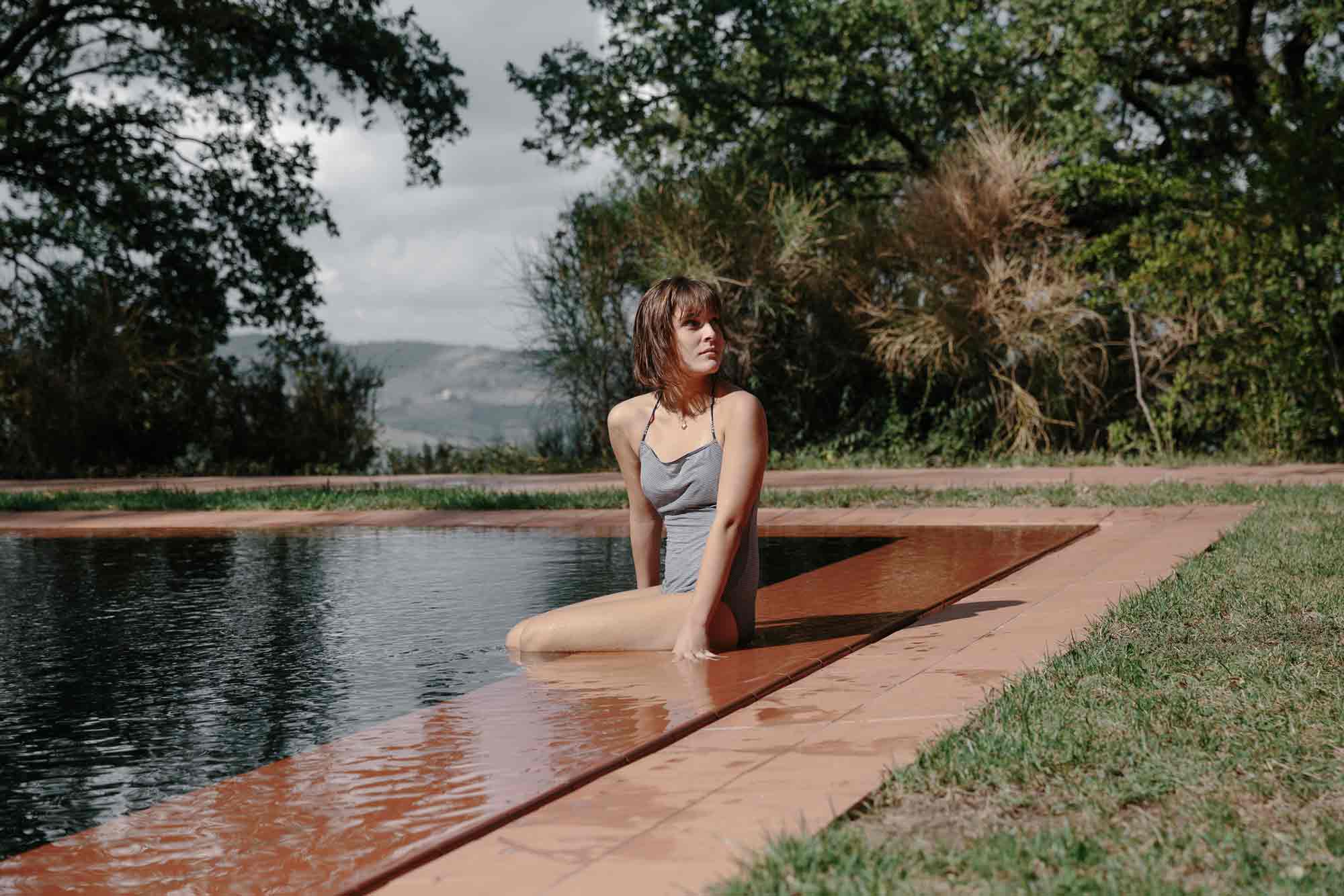 Not(e) for a Dreamer has flawless sound design. Can you describe your collaborative relationship with Composers Mahlon Berv and Ying Sun and Sound Designer Oscar Gogerly to produce such perfectly attuned audio elements?

I was incredibly lucky to work with Oscar. He was appointed as editor of this film and did an amazing job on it. Since our first day in the editing suite, it was quite apparent that to understand the rhythm of the editing we would need to have rough sounds in the timeline. I sent Oscar a rough cut to suggest what use of the sound I had in mind and he picked it up straight away.

When I met him in the editing suite for our second session he had laid out all the sounds and for the first time, we both had a sense of what the film was going to be. Oscar and I were planning to involve a sound designer to finalise the work, but when the film was ready we realised the sound was so good that we didn’t really need any further work on it. Guilt Free took care of sound mixing and mastering but the actual sound design was the result of Oscar’s incredible sensitivity as an editor.

Explaining your vision to someone can be extremely complex – and frustrating. The great thing about Oscar was that I didn’t have to explain anything. I showed him a couple of references and that was it. He knew exactly what I was after. I guess that’s a matter of luck… or magic.

When I work with Antonio it’s almost like working with an extension of myself, for artistically we complement each other.

For the music, there was this idea of reinterpreting Vivaldi’s Four Seasons and to start – by contrast – with the second movement of Winter. This idea came to me as an aesthetic inspiration, but also a consequence of the theme of the film. In Not(e) for a Dreamer, Anaïs (the protagonist) is reflecting over the big changes that adulthood will bring into her life. The structure of the film mirrors her emotional state, creating uplifting cinematic moments as devices of suspended belief. The idea was to create a conflict between a sense of delusion and one of disenchantment. Vivaldi’s Winter was the perfect fit, for such an effect was inherent in its notes.

I also really liked the irony of talking about Spring at the end of Summer while approaching Autumn using Winter as a music track. We had a discussion about the possibility of using Vivaldi’s original score as a soundtrack, but ultimately it was decided to create something new. Antonio’s aesthetic approach in the creation of the clothing was aimed at reinterpreting the past into something contemporary and I have mirrored his intention in my approach to the cinematic language. Therefore, it felt more natural and appropriate that the music would also be the result of a contemporary reinterpretation.

Can you talk us through your creative decision to switch to black and white during the water scene?

Although aesthetics are quite prominent in the film, I wanted to convey a strong sense of narrative throughout the story. By contrast, I felt the need to create a moment of pure abstraction in the film. The black and white sequence is sort of a dreamlike experience. My idea was to use it as the ultimate element to convey the main message of the film: the end of playtime. I chose the swimming pool for this purpose as water always strikes me as very abstract matter – often associated with memory.

I positioned a playful scene between the characters in the swimming pool, right before mid-point in the film so that the dreamlike sequence would be exactly opposite to it. The intention was to convey a ‘negative’ (as in reversed) quality to the same sequence. Both sequences start with a dive, but one of them is upside down and the water wave that forms seems to advance threateningly towards us. When Anaïs emerges she is no longer playful as in the earlier sequence, she’s scared and disoriented. She feels an unbridgeable distance from her companions and is suddenly aware that things will never be the same again. The black and white wasn’t a necessary device. Initially, we wanted to shoot this sequence at night, but since the whole shooting schedule had to fit in one day, the black and white seemed like an appropriate device to convey this ‘negative/reversed’ quality to the scene.

How do you approach translating aesthetic language into cinematic language?

The main psychological conflict during adolescence lies in defining our identity and understanding our role in life. The goal of this stage is to answer the main question: “Who am I?”. Antonio addressed this matter with his clothing, I did it with a film.

I prefer a ‘conceptual’ approach to a visual one. Eventually, every approach resolves into visuals, yet starting from the translation of a concept gives me a stronger ground for storytelling speculations. A designer is normally an artist, therefore a person with incredible sensitivity that takes something from the world and gives it back in a new form. I like to delude myself with the idea that starting from the clothing I can discover the original matrix that has led to the designer’s creation. The next natural step is to elaborate this concept in the cinematic language.

In the case of Not(e) for a Dreamer, the film translates M O N O – Y’s sense of discovery and search for identity into cinematic language. With his collection, Antonio had done great work in the reinvention and reinterpretation of the past. Exploring youth culture, he had played with the idea of reinventing the old into something contemporary. My goal was to translate this approach into the cinematic language.

The first challenge was to achieve a nostalgic look, without giving the feeling that we were making a ‘period piece’. In this sense, digital cinematography suited us perfectly. Even if we had been in the position of shooting on film (which we obviously weren’t) we would have still gone for digital, for our intention was to create something contemporary – yet starting from the great references of the cinema of the past. This approach transferred onto all the aspects of the cinematic approach: cast, location, music…

The clothing itself aside, what else do you believe a fashion film should contain to fully depict a fashion brand?

I think it extensively depends on the brand, but if I had to give a general answer to this question I would say that what a fashion film needs to contain is the brand’s core values. It could be a simple concept or an aesthetic legacy of decades. If the aim of the brand represented is to convey a shift in its language, then this should also translate in the film.

Your previous piece L a b o r a t o r – Y is described as a fashion editorial piece and Not(e) for a Dreamer a fashion film, can you define the differences between the two?

L a b o r a t o r – Y is a relatively old project, it was the first time I approached anything non-narrative. The difference between fashion film and editorial can be very subtle and perhaps it’s also a subjective matter. My personal take is that the purpose of editorials is to literally create artistic fashion visuals, whereas a fashion film – to be called film – needs to somehow have even a vague trace of a narrative.

What do you have up your sleeve next?

Between April and May, I will start development of the screenplay of my first feature, together with Producer Rienkje Attoh and Screenwriter Roland Walters. In the meantime, Antonio and I are working on several projects both for M O N O – Y and other brands. Our main project together is a fashion film entitled, The Coat. It was inspired by the life and work of musician Benjamin Clementine, and it’s focused on portraying a contrast between two forms of comfort. We’re now developing the script with the intention of raising the necessary funds for production before the end of the Summer.