Centred around a powerful performance from Ludovic Hughes as a returned soldier plagued by his experiences in Iraq, Fraser Rigg’s 16mm short ALEGNA delves into the debilitating emotional darkness of PTSD and the deep yearning for a love never lost. I spoke to Fraser about the creation of ALEGNA, forging a career as a self-taught filmmaker and the responsibility artists have to remain conscious of how they represent the world in their work.

Where did the idea for ALEGNA come from?

Back in 2011 I broke up with a girlfriend, then a couple weeks later I had a dream that I met and fell in love with a beautiful woman. I remember living a whole life with this person, being in the back of a taxi in New York, sharing memories. It was a totally surreal experience and I really fell in love with that person, but when I woke up the next morning I realised it wasn’t real and that the woman I had fallen in love with was just a manifestation in my mind. It was pretty heartbreaking and I actually felt more sad about loosing her than I did about my recent break up. Then the idea stuck with me and I didn’t know how to deal with the experience so I decided to try and use it and deal with it in a way that I felt could be constructive, so I started writing ALEGNA.

Whilst Adam experiences physical violence from his Iraqi captures there is also a moment of connection between them, why was it important that you depict this more rounded view of those on the ‘other side’?

Throughout our time on this blue planet certain narratives and ideas have been driven into the collective consciousness of society that may not fully or truthfully represent the complexities of human nature and history. I believe that as image-makers and artists we need to be conscious of the decisions we make in our work and the way we represent the world around us. So it was important for me to portray a level of complexity that more honestly represented the situation – war is not black and white, good and bad is merely perspective, so I felt a great way to challenge the audience was to have two men from two conflicting camps connect on an idea that they both loved, football.

War is not black and white, good and bad is merely perspective.

And an extra special piece of information is that the story that Ammar (the actor who plays Ibrahim) tells is true, it is his story. I’ve had Muslim friends watch this and say that that scene hits them so hard because they understand the consequences of Ibrahim flying the flag. Now that is cool when something that feels normal to you or I can be something so powerful to someone else.

Adam’s emotions are extremely raw for a large portion of the film, how did you work with Ludovic Hughes to reach and maintain the variations of intensity needed in his performance?

In all honesty Ludo is a very talented actor, so when I called action he brought it. I remember the first scene we shot was probably the hardest for him, it was the end scene where he smashes the mirror and breaks down, after the first take I remember looking at Dave the DP and mouthing “F**K”, it was that good. Any direction I gave was minor in shaping his performance, generally it was more technical as at that time he hadn’t done a huge amount of work on camera so it was about directing him and his performance so that we could best capture it on camera. However Dave and I did work in a way that would also allow Ludo to move freely and not necessarily be too hampered by hitting marks, etc. For me it is important to allow some space for mistakes/happy accidents to happen (there are quite a few that ended up in the film).

How did you go about making the project?

I met another filmmaker online called Jack Harries. We had exchanged a couple messages on Vimeo because we liked each others work and knew that we both lived in London, so we decided to grab dinner one evening in Soho. We clicked and I asked Jack if he’d produce ALEGNA, I really believed in him and his talent and it felt right so we decided to embark on the journey together. We set up an Indiegogo campaign and pulled a crew of the best young people we knew in London and shot it.

What was your gear set up for the shoot and how did you find your crew?

I work in the UK film industry and have worked on the two Star Wars films so I know a lot of very talented young technicians who are wanting to be HODs one day. Short films are a place for the next generation to practice our craft and apply what we’ve learnt on the big films. Almost every person on ALEGNA was a friend or came recommended from a friend. We also called in a lot of favours from people we knew in the industry and it’s was very encouraging to see the big players on films help the next generation of film makers trying to make their short.

We shot on an ARRI 416, with an old Canon Zoom from ARRI Rental in the UK. Stock wise we shot on Kodak 7219. We predominantly used LED lights from Pinewood MBS, using their Digital Sputnik heads which meant we could dial in certain colour temperatures easily which saved us a lot of time and money (no need for the gaffer to cut up rolls of gel). Everything was shot handheld, so the camera was set up with handheld bars (no easyrig). We used Firecrest IRND filters which in my opinion are the most consistent brand of NDs.

Short films are a place for the next generation to practice our craft and apply what we’ve learnt on the big films.

We had our film processed and scanned at Cinelab in the UK who are an amazingly talented bunch of human beings, they are all about the craft and working with artist. Every night our rushes would go to the lab, they would get processed and scanned overnight, then the next day we’d have stills sent to us so we could review and see where we were at exposure and look wise. This was invaluable for Dave Wright and I throughout the shoot.

What informed your decision to shoot Super 16mm instead of on a digital format?

I’ve only ever shot on film so it wasn’t really a decision that needed to be informed. Film is an important part of my process, visually I’m a fan of how film renders subject but more importantly film demands a certain level of intention when interacting with your environment and subject matter that is not found when shooting digital.

To give an example, when you take photos on a 35mm stills camera you have a limited number of exposures, circa 36, but when you shoot on a digital camera you have hundreds, if not thousands. With that limitation comes appreciation, you appreciate each exposure because each time you expose a frame you are committing to something. As an artist I’m incredibly passionate about intention and limitation, to quote Orson Welles “The enemy of art is the absence of limitation”.

Film demands a certain level of intention when interacting with your environment and subject matter that is not found when shooting digital. 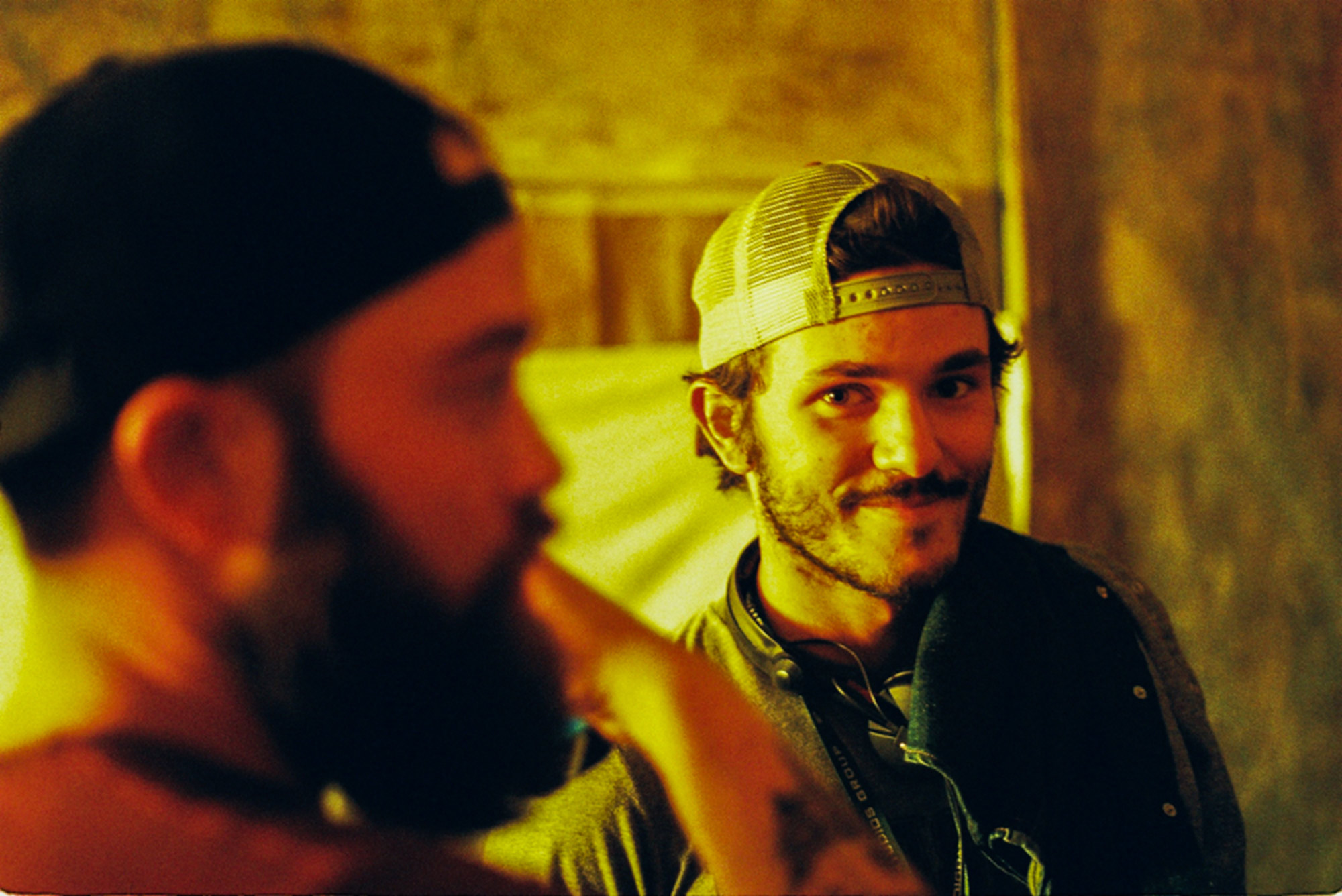 You’ve managed to forge a career in film without the aid of film school, what do you feel has aided your progression through the years?

Hard work, determination, being able to operate on little sleep and but most importantly community. Community is what will save us all, as they say, “It takes a village to raise a child”.

“Please watch in a dark space, on something bigger than an iPhone and with a good pair of headphones!” is the screening suggestion on the ALEGNA Vimeo page – does that speak to a general dislike of the mobile consumption of shorts?

Yes and No. I’m totally aware that content it consumed in many different ways nowadays and I’m down for that. But as an artist you want your work to be appreciated in the way you intended it to be consumed. Richard Pryke an Oscar winning sound mixer mixed ALEGNA so to experience the full extent of his work we recommend watching it with headphones. The same goes for the image, we shot it on film and worked with Colourist Darren Rae whose credits are as long as my arm. A lot of love, care and intention goes into the finished piece so the recommendation is just there for the audience to get the most from the project.