We last found Iqbal Ahmed busting neon fashion moves in a 1930s fabric-weaving factory with Weave. Today the LA-based writer/director returns to Directors Notes with the premiere of Offbeat – a significantly more personal and intimate project which through its unadorned natural style, beautifully expresses the overarching importance of music in the life of arthrogryposis sufferer Geno Oceano. DN asked Iqbal to share how his determination to not allow the film’s short running time to oversimplify his subject matter, opened the door to this inspiring portrait about the therapeutic power of music which also pays homage to the complexities of Geno’s life.

This project started because I was really interested in making an inspiring (hopefully) short film about a musician. That was all I knew — except that I had no musicians in mind. So I started Googling and making phone calls to dozens of musical organizations and individuals. It was a really broad search and I ping ponged between people before I came across an organization called Can Do Musos, a global community of disabled musicians.

One of their leaders, David Segal, responded to my inquiry and having seen some of my earlier work was excited about the possibility of teaming up. And as luck would have it, a large number of their group would be converging at NAMM, a music trade show in Southern California. So I went and met about 10-15 really talented and kind folks.

It’s important to make the distinction that the Can Do Musos define themselves through MUSIC — and not their disabilities. On the surface, that might seem like an obvious thing to do. But having chatted with other groups and organizations who define themselves through physical challenges, I frequently found people who were motivated by a strong vein of politics or activism. Which is vitally important but in some ways, it wasn’t the kind of smaller and personal story I was hoping to tell.

In their love for music, the Can Do Musos I met were overwhelmingly positive and excited to talk about music. They wanted to perform. They were thrilled for any opportunity to jam together. They were relieved also NOT to constantly talk about their disabilities, but instead to talk about their PASSIONS. And it was in this backdrop that I met Geno Oceano, possibly the most passionate of the bunch. 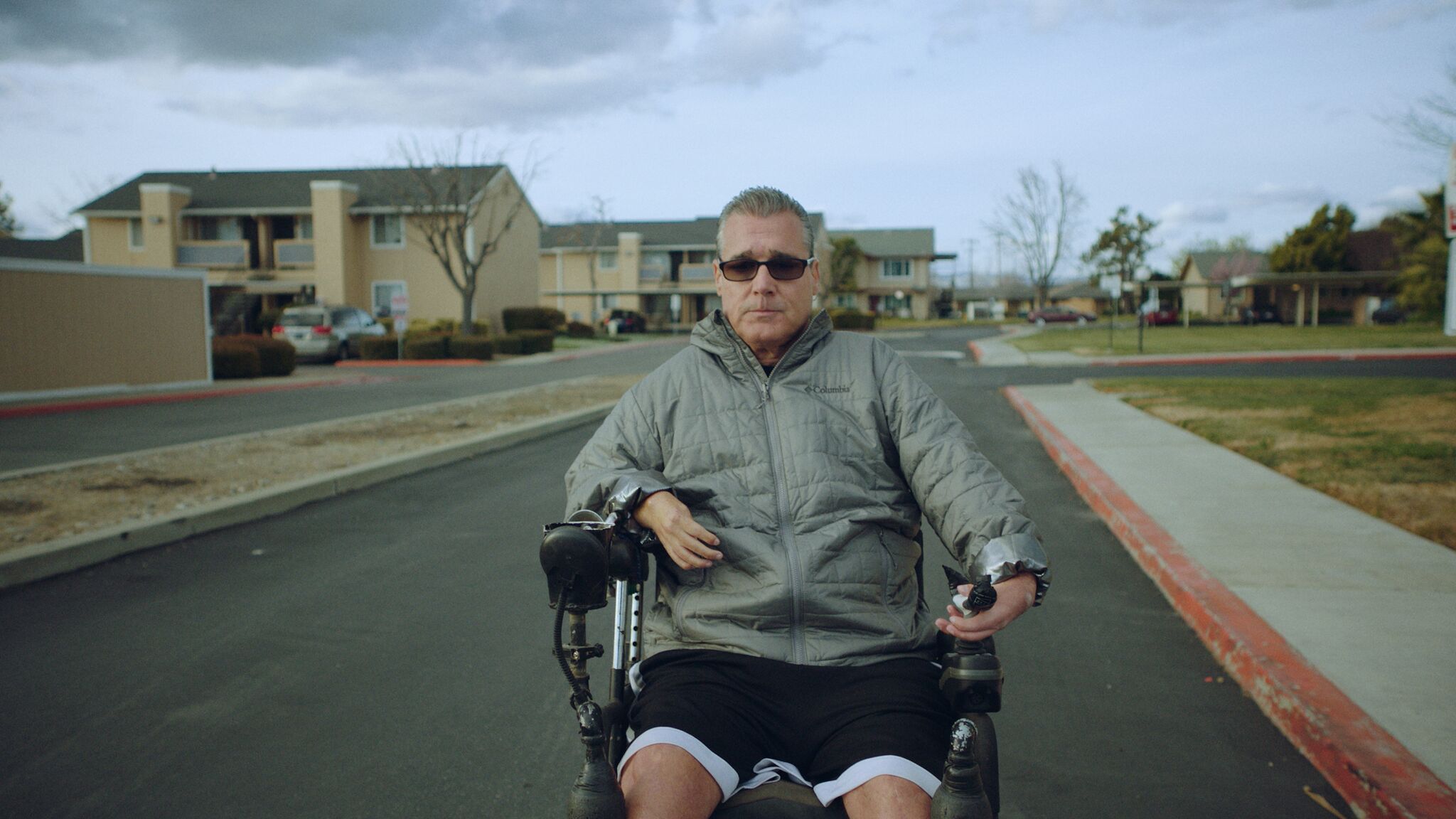 I couldn’t possibly presume to tell everything about him in 5-minutes.

He was new to the group — but his energy was infectious. It felt like he had finally found his emerald city. He was finally around HIS people — music nerds who just wanted to play music. And these folks didn’t bat an eye at his disability — Arthrogryposis Multiplex Congenita (AMC), or simply Arthrogryposis. The condition describes congenital joint contracture in two or more areas of the body.

I interviewed Geno during NAMM and was touched by his immediate willingness to share. Almost nothing was off-limits. He was equal parts disarming and charming. At the end of our hour-long chat, I knew he’d be a perfect short film subject. I told him that I’d love to continue the conversation and visit him at his home in Northern California and film for a day or two.

We filmed in Hollister and Salinas. From the start, I made clear to Geno that I’d like to be true to his essence, but by no means tell his ENTIRE story. I couldn’t possibly presume to tell everything about him in 5-minutes. But I could try to hint at his complexity as a human and leave it at that. I wanted to give an unhurried glimpse into his life — his past, his present, and hopefully a hint at the future for him. We hit it off and he was willing to trust me. Which is frankly always an honor for me. To be entrusted to tell a personal story — well, that’s maybe the highest honor I ever feel in this business. 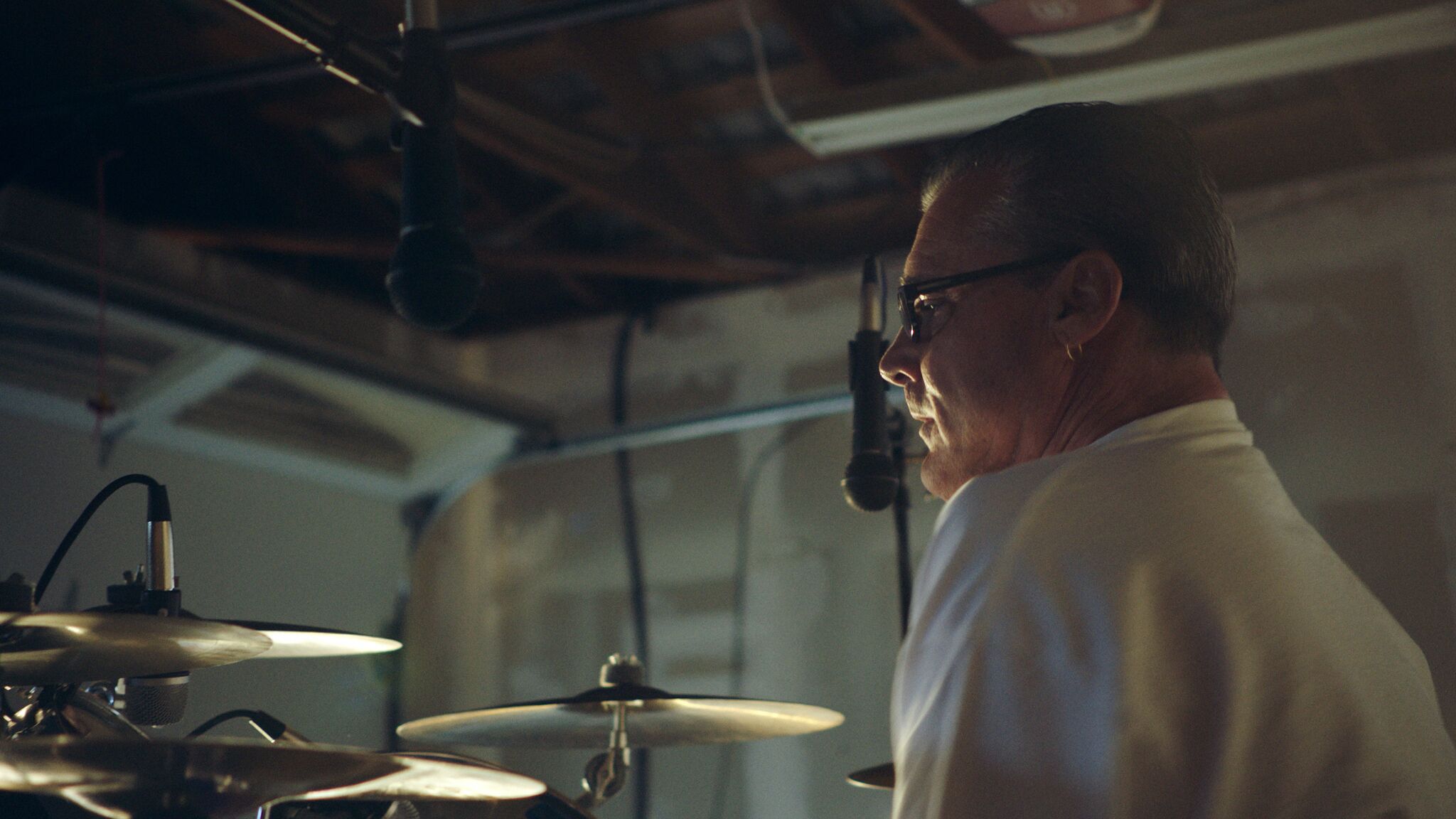 Watching someone intimately is not something to which I’ve really been privy. At least for myself, watching Geno in his personal routine felt a little sacred. That sounds goofy to say — but that’s actually how it felt. I felt a need to be respectful with everything I filmed and ultimately shared.

Music was especially important to me on this film. Besides the fundamental role music plays in Geno’s life, it was also really key for me to have music that supported the story emotionally, but that never took center stage. After all, Geno and his drumming are the heroes. I worked with my Composer Sean Sumwalt to shape a subdued but personal soundtrack for the film. Simple instrumentation was important for us. I wanted to start with an almost somber feeling. Music that felt musical and also respectful, somehow. Something that reminded us of the gravity or responsibility of watching someone intimately.

A good friend of mine, Cinematographer Andrew Shankweiler, was always on board for this project. The moment I pitched the project to him, he was sold. His family has worked for a long time in the field of disability rights — so this was personal for him. Andrew and I have an easy understanding having worked together a few times before.

We filmed for a couple of days in Northern California and I interviewed Geno one more time at the tail end. A month later, I visited him once more for a final interview. I wanted to tell his story authentically. I was a nervous wreck when I screened a cut of the film for him. I really wanted his blessings. And I’m so grateful that he gave them enthusiastically. 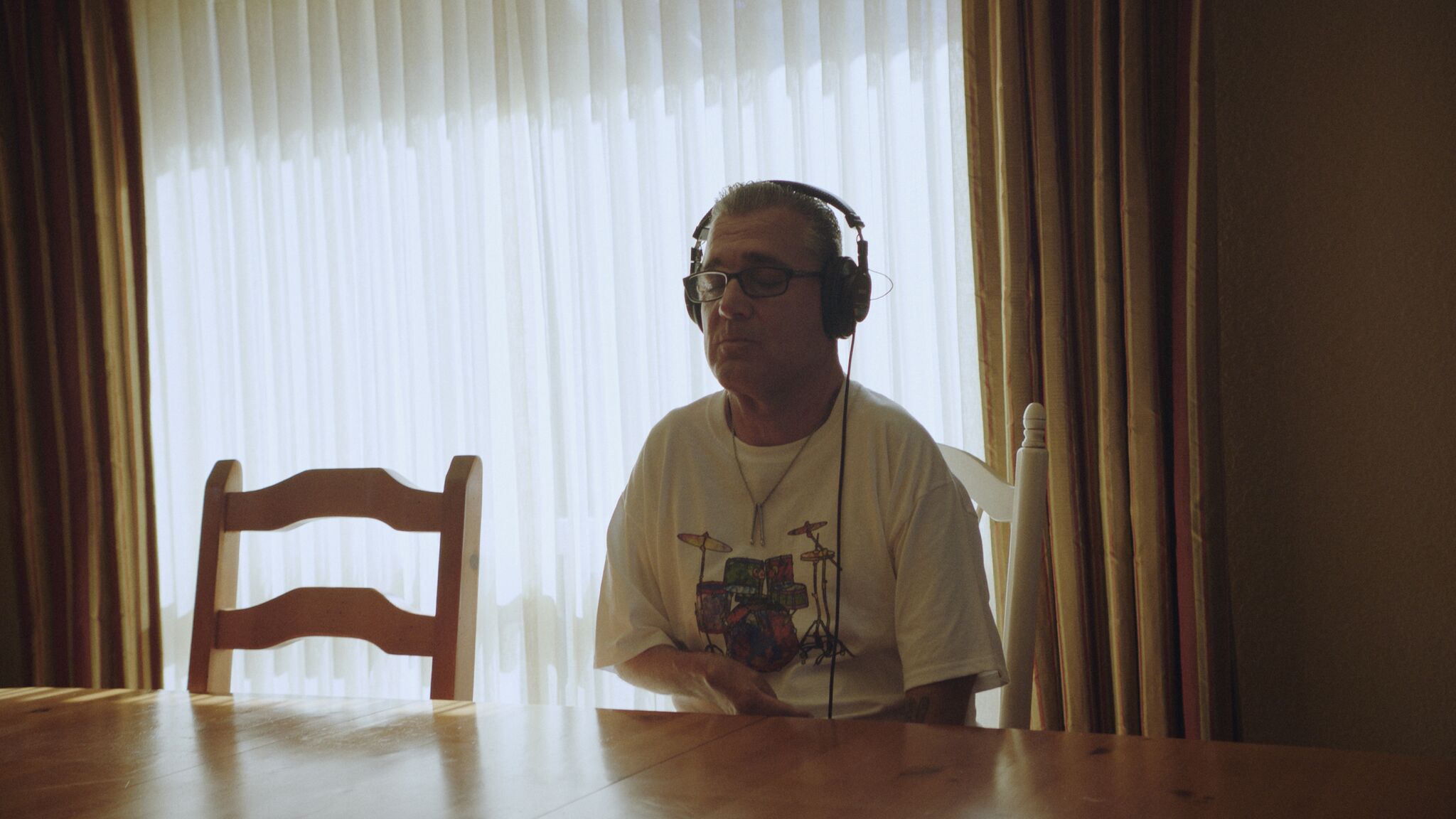 I knew that I wanted an unadorned visual style. I wanted it to be beautiful — but naturally so. It would just be about capturing small personal moments and picking the frames that could show those simply. I didn’t want to set up lights or try any wild camera moves. I just wanted to keep things simple and patient. The less emphasis I put on the camera setups, the more natural Geno felt throughout the process. And just as he did during the audio interviews, he allowed me to film anything and everything. Nothing was off limits. I think that level of access and intimacy comes through in the personal routine and small moments he shares with us.

I wanted to introduce Geno’s world in a small, almost claustrophobic way. Just to get a sense of what his actual day would FEEL like. The mammoth efforts to do things that we all take for granted — getting out of bed, brushing teeth, etc. Then as we learn more about Geno, I wanted to open up the world a little bit. To see outside. To see a smile.

To be entrusted to tell a personal story — well, that’s maybe the highest honor I ever feel in this business.

The tone of the piece was paramount to me. When I discussed the project with my Editor Cyndi Trissel, I knew I wanted us to be as patient as possible. To set a slow and somber tone to start. To create a kind of solemnity. Each line of dialogue is incredibly revealing of Geno’s life and historical struggles, so I wanted each thought to land cleanly.

This patience, besides giving the audience a chance to listen and actually absorb Geno’s words, was also done to create contrast. We finally feel that contrast — and a change in the visual language — when we shift gears and learn about Geno’s love of music. That sets the stage for the reveal that Geno is a drummer. When we finally see Geno drumming I’m hoping it feels a little joyful. Watching it was 100% one of the most inspiring things I’ve EVER seen. And to see Geno drum is to really understand him. 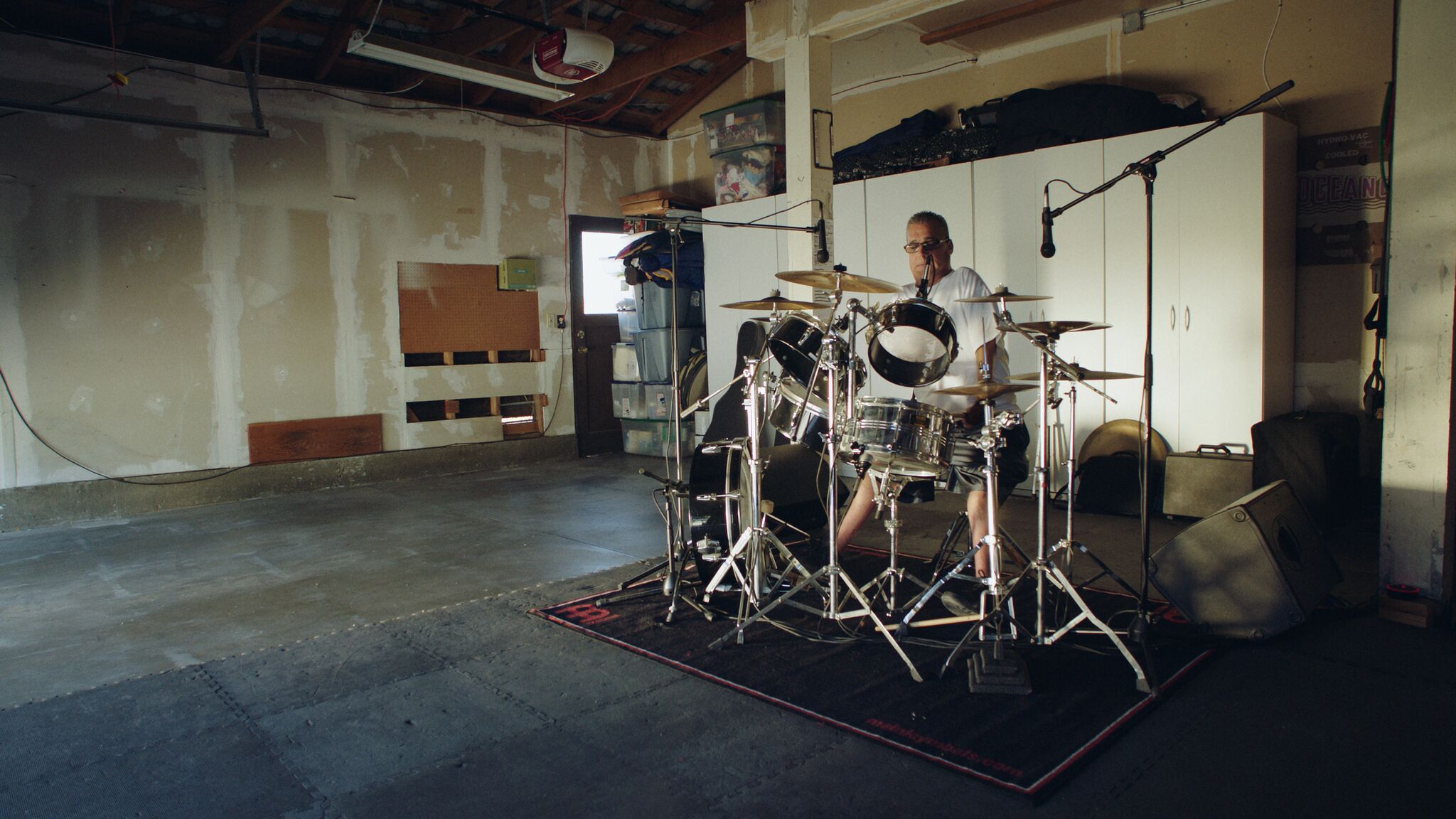 Withholding the reveal was important to me because it allowed me to actively engage the audience. I don’t think too many people see the joyous ending coming. I’d like to believe that most people feel the seriousness of the subject matter and believe that it’s the direction in which we’ll continue. So I hope the introduction of music and Geno’s drumming is a wonderful surprise. And a shift in tone that allows the audience to smile for the first time. I think earning that smile — from a directing and audience standpoint — is vital.

People are so complex. We have so many sides to ourselves. We are the sum of so many angles. But I think a lot of short documentaries sometimes oversimplify their subjects due to a short film’s time restraints. I really wanted to maximize Geno’s complexity. To acknowledge that I really CAN’T tell his entire story in four minutes. But I can show you diverse aspects of the man. That’s my attempt to show the most rounded person I can. And I also think that’s why the journey feels larger than the four-minute runtime.