A Feral Girl Finds Kinship in the Forest in Billy Nawrocki’s Cannibal Tale ‘Are You Wild Like Me?’

Unless you’re exceptionally lucky right out of the gate, most of us struggle for years to find our tribe. That group of people with whom no false fronts are necessary and who teach us that our individual quirks and oddball interests are in fact the glue which binds us together. New York based Director/Editor Billy Nawrocki channels this primal need into the heart of his cannibal coming of age short Are You Wild Like Me? which makes its online premiere today on Directors Notes. You can watch the film below, after which Billy shares how the project developed from an inspiring song lyric to a quiet horror short about belonging.

About 3 years ago, I was listening to the song Bros by the North London band Wolf Alice in my car – I fell in love with the song, which evoked the same feeling I got when I first heard 1979 by The Smashing Pumpkins. This feeling of freedom, wind in your hair, driving down the coast in your car with someone you care about – before the change over to social media. In Bros, there are the lyrics: “Jump that 43 / are you wild like me / raised by wolves and other beasts” and the imagery immediately popped into my head: a young girl, feral, wild, running through the forests with another feral child by her side. Two little beasts that aren’t bound by society, rules, morality – yet they understand on a base level the idea of platonic love.

I also wanted to make something that was part of the horror genre, so I decided that the story would be a peek into the life of this feral child who assimilates and learns from “civilized” people by stalking and killing them for food. During the Indiegogo campaign I dubbed it “A Cannibal Coming-of-Age Film” (as coincidence would have it, Julia Ducournau’s masterful film Raw was just about to hit the festival circuit, with critics dubbing it a “Coming-of-Age Cannibal Story”) and AYWLM? made about $6,000 of its goal. Therefore, myself and the mostly NYC/Brooklyn-based cast and crew had limited time to shoot it in the summer of 2016, and we planned to film it over one weekend in Connecticut, near my hometown and other locations along the Farmington River that I was familiar with.

You gotta do what you gotta do, especially when the budget is small.

One of our producers, Kai Calubaquib, was essential in helping us figure out preproduction. The first film we made, ETA was a quick weekend shoot, but had fewer moving parts, and we didn’t think too much about insurance costs, scheduling, etc. – the little things that sometimes hit you like a cold glass of water. On top of that, as a freelance editor, I hadn’t spent much time on a film set. Kai helped us figure all of that out but unfortunately couldn’t be on set the weekend we shot. A good friend of mine, Sheri Mathieu, became a producer, helping on set and letting us use her house as staging/lodging/craft.

Our DP, Rob Silcox, suggested we shoot on an old set of Kowa Anamorphics for the project to add to the timeless feel I wanted to evoke. They also surprised us with some of their unique qualities – in the scene from the mother on the bridge to the pan upriver, there’s a weird distortion on the sides of the frame that I ended up loving. It subconsciously makes you a little uneasy, which sets up the rest of the film. I wanted the audience to feel at a distance from everything so we shot everything pretty wide. If not wide, I wanted to be very close up. Many of the master shots also evoke this feeling of theater, especially the opening shot of Brianna going missing from her pack and play. Counting reshoots, we used 5 different cameras: the RED Dragon, Blackmagic Ursa Mini Pro, a DJI Inspire II drone, a Sony FS7, and a Sony A7s. You gotta do what you gotta do, especially when the budget is small.

I held auditions with around 8 kids at different times in Central Park, except for Malachi Young’s audition, which was at Prospect Park in Brooklyn. He could NOT sit still during the audition. I could barely hold his attention. I eventually chose Malachi overall because of those reasons. Vanessa Urzia, the lead, stood out because of her athleticism, and like Malachi, understood that these roles couldn’t be too “act-y”. Her mom also let Vanessa jump onto her back and attack her to show she could do that stunt. What a sport! One of the first scenes we shot had Vanessa chewing on fake blood and skin in her makeshift home, and she HATED the taste, texture, everything. I had to step in and eat some as well. After that, we were smooth sailing, and I couldn’t have been more impressed and proud of her work. 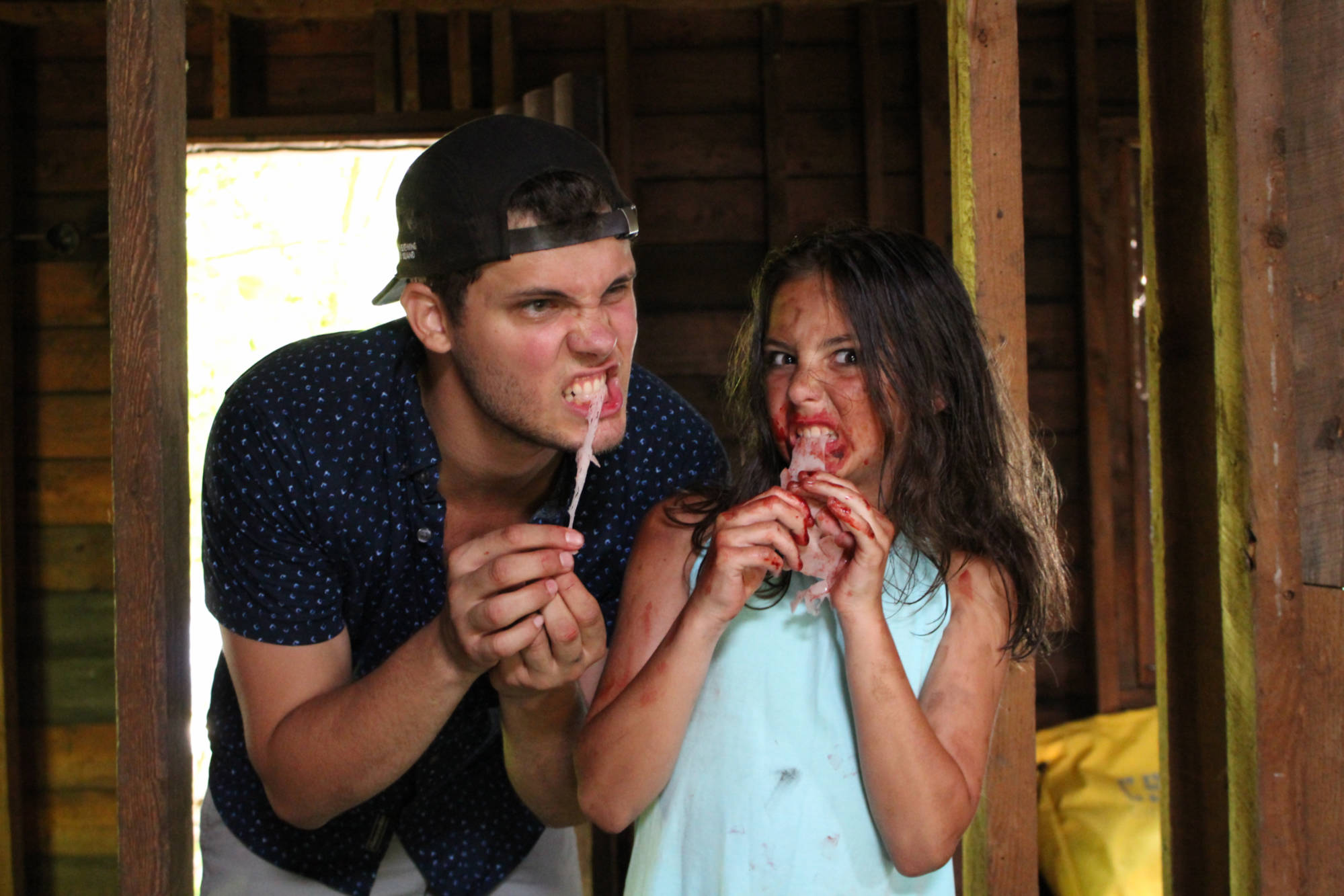 Jorge Lucas, the AD, was integral to keeping us on track that weekend. The role was new to him, but that didn’t deter him – he figured out transport, the best order to shoot, made maps of the area, and more. Jorge notes, “I definitely learned the importance of keeping people fresh and rested. Sleep is important, as is giving people time to set up and do their jobs.” Another friend of mine, Nate Mitchell, was also indispensable as a producer and a key grip. I cannot stress how important it is to have someone on your set that isn’t deterred by challenges, can solve problems without batting an eyelash, and understands the vision. Nate is that guy. We also had a stable of friends and family as PAs, craft services, and more, who were all essential and just excited to be working on a film set. Every role gave it their all.

I was the editor on the film, which overall took a couple of months to edit because of a few reshoots of establishing shots and the fact that I just didn’t always have the money to ask for things to be done! I hired a great composer, Anthony Schon, to do the score. I used many tracks from The Album Leaf/Jimmy LaValle and Disasterpiece as inspiration. Third Beacon, a post house from Chicago, completed the VFX, final color and sound mixing.

In the meantime, I have been working on a feature version of this story which is proving challenging and exciting – there are so many places this story can go. I’m hoping to get the feature based on this story off the ground in the next couple of years!