A very different beast to the comedy opera we premiered from Kevin Rios a couple of weeks ago, Maternal sees the LA based filmmaker team up with co-director Anamari Mesa for the contemplative story of a young woman processing her doubts and hopes before meeting the adoptive parents of her unborn child. We invited Kevin back to DN to discuss how he and Anamari conceived and shot this deeply affecting and tender story.

The idea for Maternal came from a collaboration between my co-director, Anamari Mesa, and myself. For 2017, I wanted to make a film for my birthday. I had traveled to NYC for the week and Anamari and I had spent the summer coming up with the concept of a pregnant woman meeting the adoptive parents of her unborn child. The plan was to create the script along the way and keep the production within one day. We took a train to Tarrytown, NY and shot at a motel that we had used as a location in a previous film.

Our idea was the create a haunting portrait of a woman struggling with a life altering decision that we hadn’t seen elaborated on in film.

We shot the film in one day in September 2017 and did a minor reshoot in December 2017. After the initial rough cut the film, I decided to incorporate animations and brought on a frequent collaborator, Sky Shields, to assist. Our idea was the create a haunting portrait of a woman struggling with a life altering decision that we hadn’t seen elaborated on in film. When we edited our original nightmare, we decided that a reshoot would help clarify the narrative. This section was digitally shot to incorporate the special effect shot.

The film took 7 months to complete (July 2017 – January 2018) and was shot on super 8 film using a Canon Super 8 that I rented for $50 bucks in NYC. I processed the film at Pro8mm in Los Angeles. The reshoot was shot on a BlackMagic pocket cinema camera to facilitate the SFX and then overlaid with super 8 filters to match the rest of the film.

Animation was something Anamari and I discussed while filming. Due to budget constraints and our improv approach to production, we realized that we’d potentially have to make decisions in post-production to help inform the story in a clearer way. Once we had a solid rough cut of the film, I felt that the overall tone was too mature. Anamari and I were primarily inspired by Alfred Hitchcock’s Vertigo and visual elements from Michel Gondry’s Eternal Sunshine of the Spotless Mind and looked toward these films for inspiration on how to adjust. 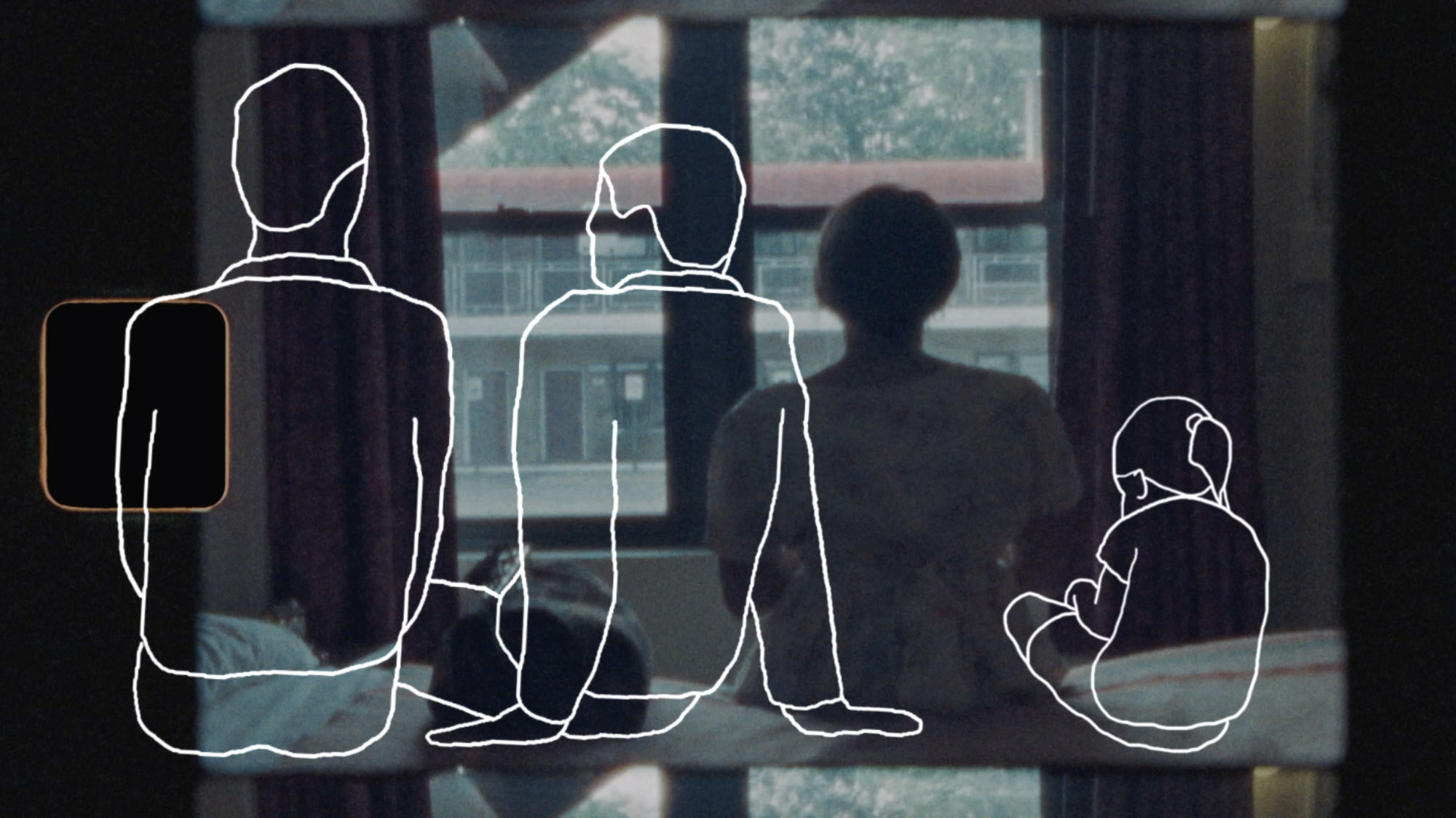 The mixture of animation and Super 8 gives the film a nostalgic and childlike quality that hinted our protagonist’s personality.

We ultimately decided to incorporate simplistic animations to reflect a younger mindset that could project her inner-thoughts. A spiral in the eye to indicate confusion, sitting in-between her future child and adoptive parents, highlighting a choice she hasn’t considered before, etc. The mixture of animation and Super 8 gives the film a nostalgic and childlike quality that hinted our protagonist’s personality, which would allow the audience to interpret her anyway they choose. With an unimaginable weight on her shoulders, paralyzing self-doubt, this mixture of elements helped achieve a haunting portrait for a scenario that would trigger nightmares in most.

Anamari and I continue to collaborate on various projects and are currently seeking financing for a digital series inspired by a short film called Binge I wrote and directed and in which Ani starred. Outside of our collaborations, Ani and I both live in Los Angeles and are working on feature length screenplays and continuing to be on the lookout for opportunities to tell stories about women, minorities, and anything in-between.