Reminiscent of 2016 feature Captain Fantastic, Jan Eric Huehn and Alex Schuchmann’s Omogeneo tells the story of a family living outside of society, led by a patriarch who teaches his children his own philosophical and moral beliefs. The difference between Captain Fantastic and Omogeneo though, is that the latter is based on a real-life family, and Huehn and Schuchmann use their film to recount the lifestyle led by this family for almost five years. DN caught up with the Hometown documentary duo to talk about the methods they used to capture the story of this remarkable family.

How did you hear about the Garattoni family?

At the beginning of the year, Alex and I found ourselves at the office talking about our dreams and goals. The prior year we had just started out working in the commercial field and we felt somewhat disconnected from the films we really wanted to do. A couple of hours, and maybe also beers, later we had booked our flights to Fuerteventura. A cheap opportunity, and our desire to brainstorm and plan the year ahead of us. What do we want to do? and what stories are there to tell?

So, just a week later we arrived on the island, living in a van and working on concepts. I think it was two or three days in we were having a drink at a bar and saw Davide playing his bass on stage. Both of us were immediately caught by his charisma and we just took a chance and asked him if he would want to work with us. He invited us to a club where he would be playing a couple of days later, where we could talk a bit more about what we wanted to do. To be fair, our idea at that moment was to shoot a music video and not necessarily a documentary.

Cut to the Sunday, we know we are heading back to Germany tomorrow and are standing in front of this private club with him. He briefly tells us his story: That he is living with his kids in a house now after living in a tent together for five years, they go fishing, play music in the harbour and that he likes to surf. With every word he said, we got more excited about him and his life. Back home we were still so excited and we talked the rest of the crew into joining us in Fuerteventura just two weeks later. 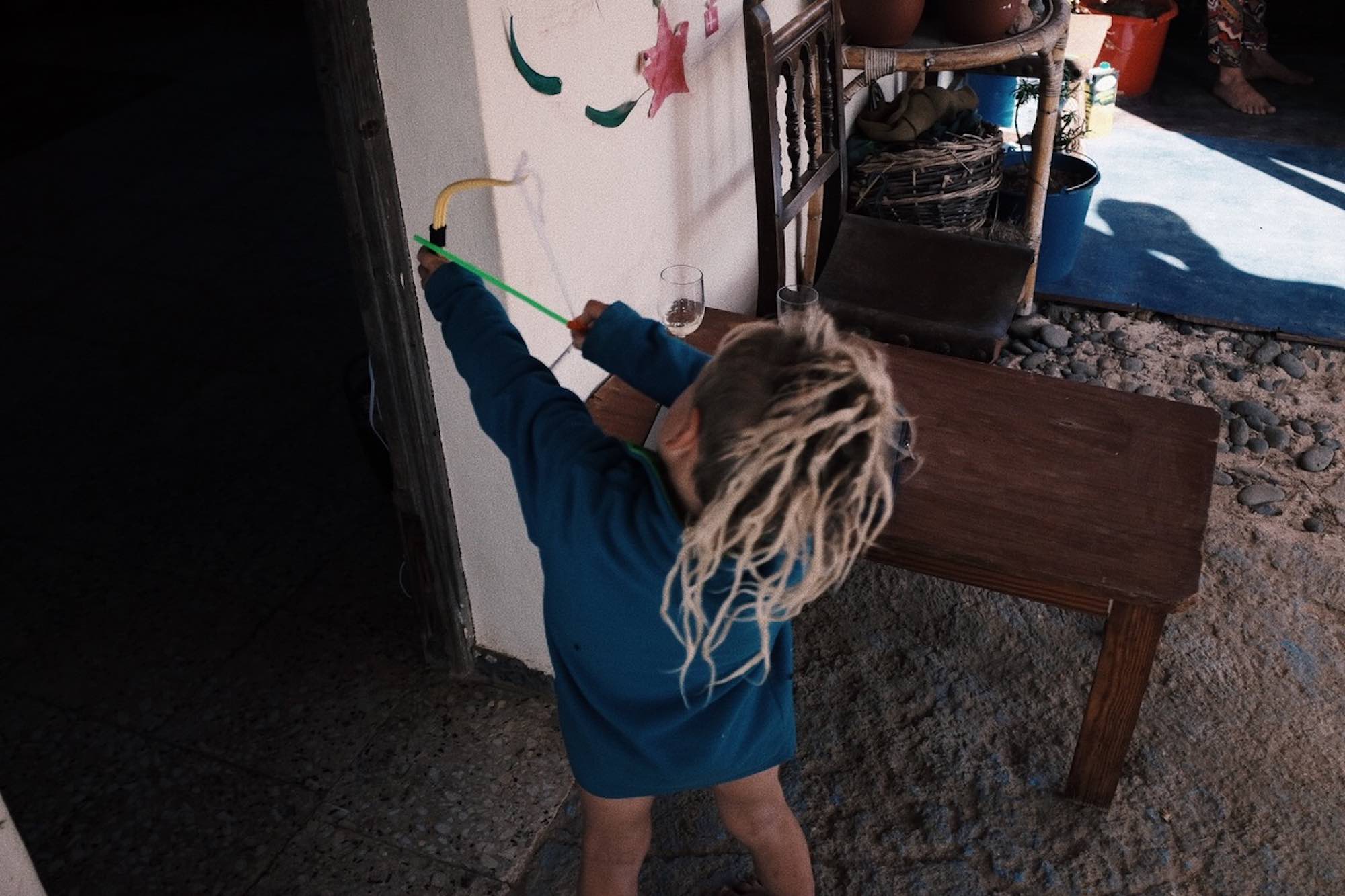 After that, where did the concept for building a documentary around this group of people begin?

So, somehow, this story just all of a sudden opened up in front of us. We knew that this man was incredibly interesting and that he had a lot to tell but, to be honest, we didn’t know what exactly we’d discover. We worked out a brief concept. We wanted to feature his music in a unique way and that we didn’t want to shoot a typical interview. The entire film should have the look and feel of a fictional film, which is also why we decided to shoot a lot of Steadicam footage.

How much time did you spend with the family? What coverage did you get and how much was left on the cutting room floor?

We, in total, spent just four and a half days with the family. But within that short period of time, the family allowed us to be around pretty much 24/7, which made it possible for us to get to know their lifestyle. I think I can speak for everybody involved in that we would have loved to stay longer.

Regarding coverage, we tried to focus on what we needed to tell the story. We wanted to show the main activities of the family to give the best possible insight into the way they live. So, we followed them pretty much all day long, and because we decided to shoot on 16mm we constantly had to ask ourselves: Is this important? How do we tell this scene or this situation in the best possible way without losing the spirit of the moment? So, at any given time we tried to be ready and to decide and react fast to what was happening.

Because we decided to shoot on 16mm we constantly had to ask ourselves: Is this important?

It was an experience we are very grateful for, you start to pay attention to every word and every situation in a completely new way. When you shoot digital you often go and cover a lot more. I mean who knows, maybe I can use it in the edit later. But, this time, it was just impossible to do. So we covered way less in total but almost every shot we took had a potential to end up in the final film. I think our plan was to end up with a five minute long film but while editing it just got longer and longer, so at one point we said “Fuck it, we have to give the film the time it needs”.

We actually premiered the film in April at a private party, working through the two nights before the event to get it done. After watching Omogeneo at the event we felt like the film was nice to watch but was not living up to what we had experienced. So, we went back, listened to the interviews we recorded with both of them and reedited the whole thing, which I am so happy about. I think we were too focused on our plan, on our concept, and that we forgot to listen to the actual story which was right in front of us. 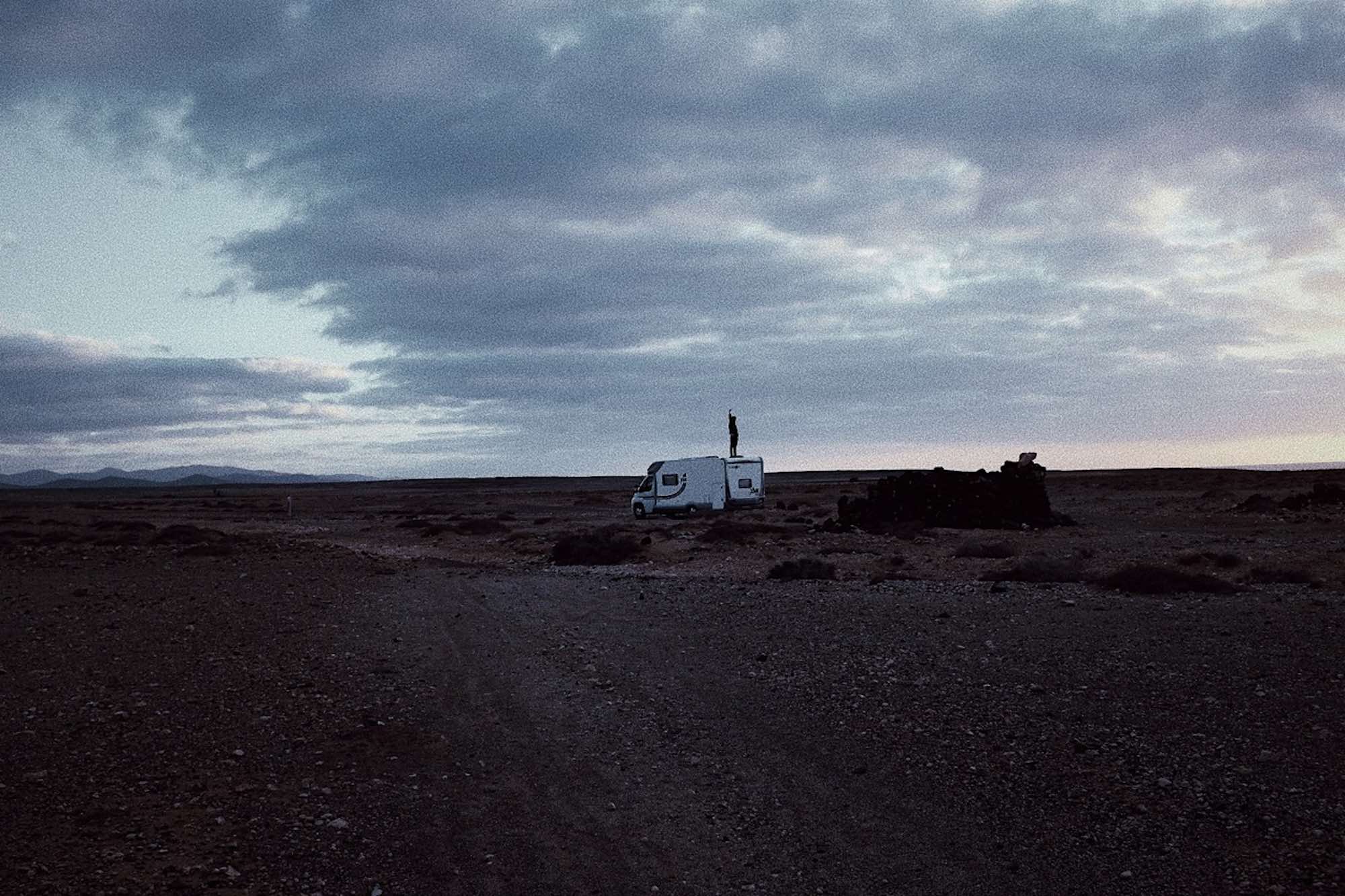 The family are presented with such warmth and empathy, was this a conscious decision given the issues they are faced with by the government?

We like to speak of our film as a portrait of a moment. The most important thing at any time was to transport the feeling we had during our stay to the audience. The family were so open minded, so helpful at any given time, it would have just been wrong to not show that.

I was reminded of the narrative film Captain Fantastic watching this, both films deal with how an individual lifestyle, led by a patriarch, is inevitably affected by the rules of a wider society, what are you hoping to communicate or question with Omogeneo?

We get asked that question a lot but we never wanted to criticise anything specifically. We neither wanted to take a judgemental look at the way Davide and his family live or what the society is doing wrong. We wanted to tell their story and find the beauty in it. I think everybody in the end has to decide for themselves what they want to do with their life, and what is right and what is wrong, and I guess in the end that’s what we communicated.

You utilise a mixture of film and digital cinematography, what was the creative decision behind this?

Since the whole story about Davide and his family felt really down earth, natural and not digital at all, there was no doubt for both of us to shoot this on film. Additionally, film would give us the dynamic range we need for a bright landscape like Fuerteventura, so we ordered a few 16mm rolls that which makes up about 80 percent of the final film.

We wanted to tell their story and find the beauty in it.

Due to a limited budget however, we decided to shoot the fishing scene digitally, which was a good idea in retrospective because Davide spent about two hours talking with his son while they were trying to catch this fish called Vieja. The surf scene was also shot digitally, it was important for us to get as many frames out of the underwater camera as possible to create this certain feeling of trance and zero gravity. Furthermore, we exposed a few Super 8mm rolls in an all automatic camera so that we were able to react very spontaneously to the things happening.

What’s next, creatively speaking, for you?

It’s always hard to realise projects with financing and time. We were lucky that we had an amazing little crew who believed in the project and came there for the same reason as we did to tell a beautiful story. So another big thank you to all those amazing people involved!

But, for the future, we want to experiment more with both the narrative and documentary world. We want to keep looking for interesting people who have a story to tell and maybe we’ll be able to make a feature length piece which balances on the line between documentary and narrative. I guess that’s the goal.

Omogeneo is one of the many great projects shared with the Directors Notes Programmers through our submissions process. If you’d like to join them submit your film.