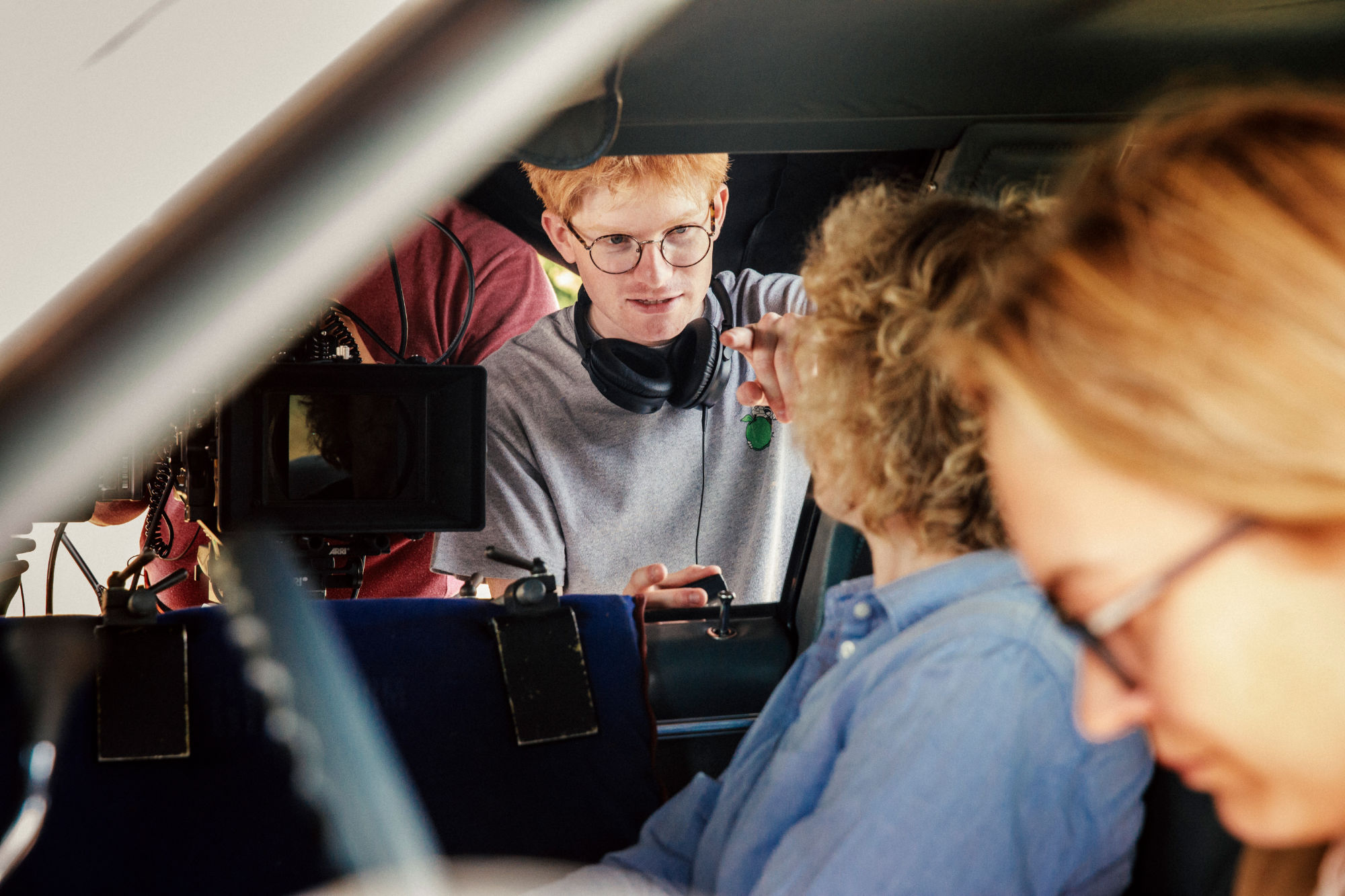 Taking a different tack from what we typically experience in films about the hot button topic of America’s death penalty, Charlie Manton’s November 1st offers an uncomfortable shotgun view of the fractures in a mother and daughter’s relationship as they travel across state to witness a long-overdue execution. A film which struck hard when we saw it as part of the NFTS’s graduate showcase, DN sat down with Manton to discover how the London based director created a winter American road movie during a sweltering UK summer and why he wanted to depict the effects of capital punishment from a different perspective and without judgement.

November 1st is your rather impressive NFTS grad short, what do you feel your time at the school brought to your approach as a filmmaker?

Thanks. Appreciate it. I had a great time at NFTS and feel the main thing I came out with was meeting an amazing group of talented people and now collaborators. I think NFTS is great as it gives you so much freedom and space to explore and do what you want to do. There are some incredible tutors there who give you an amazing toolbox of techniques on how to break down a script, working with actors, etc. So a lot of that sinks in and worked its way into my process.

What first spurred you to make a film exploring the effects of the death penalty on the family of the victim?

I’ve been obsessed with true crime and the US justice system for a long time and often find myself down a rabbit hole researching certain cases. One of the aspects that really stood out to me was the death penalty, but not from the perspective that we usually see these stories from (convicted criminal or detective) but instead, from the families. I feel the death penalty has massive repercussions and massively effects the families involved, on both sides.

During the research, I discovered a lot and observed so much pain.

How was the narrative shaped and developed by the research you did into the subject. Was that a long process?

The development of the story/script took a while. As I mainly spent my time doing heavy research, to really know this world as well as possible, so I’d be able to portray this all in the most authentic way possible. I was also lucky to speak to someone who was willing to share her experiences about what she was going through. This really influenced the writing.

During the research, I discovered a lot and observed so much pain. These people waiting for the convicted murderers to be executed go through years and years of waiting, it feels as if their lives are sometimes on hold and it tears families apart. I struggled to see what good came out of the death penalty. Although I was adamant to try and make a film that wasn’t going to take sides or force a message down the throat of the audience.

So once I was done researching and building the characters in the film, I then really put pen to paper. And to be honest, the writing of the script was a pretty quick and a painless process – at least looking back on it. It felt like the story and the characters knew where they were going. There wasn’t a dot to dot plan for this. I discovered a lot while writing, putting in roadblocks for them, making the journey as hard as possible.

It then went through a few drafts, mainly reigning the lead character (Bonnie) back in a bit, so that when she does ‘hit out’, she really hits out. It had the tendency in the early drafts to sometimes feel a bit one note, so building more variation in her journey to allow the audience to sympathise with her was key. This was also a challenge for Lindsay Duncan who overcame it and then some. I was in awe of how she brought Bonnie to life. She delivers such a nuanced, fierce, raw and painful performance that constantly blows me away when I see the film. I had countless moments of hairs standing up on the back of my neck when we were shooting. I feel incredibly thankful and lucky that she took this role.

I imagine that laying the groundwork to convincingly shoot an American road movie in the UK was quite an undertaking.

The prep for this was tough but we had incredible HODs. It involved a huge amount of scouting up and down the UK. And a lot of figuring out how the hell we were going to make a US road trip film in the UK… and in 10 days, meaning the locations had to be somewhat close to each other. We found some great run-down locations, that our insanely talented Production Designer Theo Boswell managed to work his magic on and make them look American.

One of the scariest and most daunting parts of prep was casting as the whole film would only work if we could find two incredible actresses with the right chemistry. We were lucky enough to have Jessie Frost on board as the casting director and we discussed many names. The one name that really stuck out though was Lindsay Duncan and we immediately put out an offer. We knew that it was a long shot, but she got back within a week and asked to speak to me. She loved the script but said she was worried to say yes as it would be the most naked/vulnerable she’s ever been in a role. After a chat, she agreed and she was on-board. Having Lindsay attached to the film immediately raised the bar and it suddenly felt like everyone had to raise their game even more.

We went in knowing pretty much exactly what we wanted but of course, always open to changing things, when needed.

Lindsay and I met several times before the shoot and went over and over the script, picking it apart. And also discussing the world and sharing the research we’d both done, it was safe to say that we were both completely invested in telling this story. She then went on and heavily prepped for two weeks.

A bit about prepping this film visually. I’m a huge fan of the Coen Brothers, Jeff Nichols, David Fincher and so we drew heavily from these filmmakers. DP Molly Manning-Walker and I watched many films. I then shot-listed the film with her and we went in knowing pretty much exactly what we wanted but of course, always open to changing things, when needed, when we saw something would work better. This normally came after seeing what the actors were doing on set, it felt organic.

Molly and I know each other’s taste and she knows what I like, how I like to frame things, so there’s a really nice shorthand. I’m generally a fan of low contrasted images, slightly desaturated images, so Molly lit the scenes very softly and we also used some haze throughout. Another challenge was that this film is set in the beginning of Winter and we were shooting at the height of the British summer, which was very hot… luckily this issue was fixed in the grade. The film was graded by Toby Tomkins at CHEAT, who really elevated the film.

What did you shoot on and how did the story dictate your approach to the film’s cinematographic style?

We shot November 1st on an Alexa Mini, with Arri Master Primes. Mainly shooting them wide open at 1.3, (shout out to the amazing 1st AC Catharina Scarpellini for keeping everything insanely sharp.)

I wanted to shoot the film in a controlled/pretty locked down way, especially when we were with Bonnie in public. When she was on her own, in private, we then swapped to handheld, to play up the vulnerable side of the character. On the second day of the film, when things go downhill and the stakes increase, we scrap the sticks almost entirely and go pretty much completely handheld to really make sure the audience feel as connected and with her as possible.

The shoot itself was incredible. From the first take, after people saw what Lindsay and Sophia Myles were bringing to the table, the crew were immediately excited. Working with Lindsay and Sophia was like being at a masterclass every day. I was blown away by every take they did and would jump at the opportunity to work with them again.

The cast and crew was a real family. I think that’s honestly one of the most important things – to make films with your friends. I couldn’t imagine doing it any other way.

With the shoot in the can, did you face any particular challenges once you hit post, especially with regards to balancing the blistering tone of Bonnie’s character moments?

The edit took several months (edited by Celina Øier). We cut one short scene at the beginning to help us get into the story quicker. And then there was a bit of work reigning Bonnie back in especially towards the end of the film in the corridor; we cut several lines there. The last thing I wanted to do though was to tone her down, so it was just finding the sweet spot and also really highlighting the moments when Bonnie is vulnerable to get the audience to sympathise with her.

What future projects do you have in the works?

I’m currently developing a couple of projects. One of them is a mother and daughter piece set during pilot season in Hollywood. It’s a comedy/drama. The other project being a crime thriller set in Nebraska, which is based on a scandal that happened there in the 80s.