Taking a break from his duties helming Jimmy Kimmel Live for ABC Television, LA-based Director Andy Fischer steps back to the old west for silent comedy short LUCKY, a film in which a hard-working but poverty-stricken family get hit hard by the futility of being. Fisher joins DN today for LUCKY’s online premiere to explain why stepping back from the complexities and dialogue of his initial draft brought narrative clarity and also share the delicious recipe for edible horse poop.

The script for LUCKY was originally much more complex. Each character had an intricate back story that led them to their fateful decision to enter the barn. There was even some dialogue! I put the script away for a while as I worked on different projects and when I came back to it I saw a much more concise way of telling the same story. Telling it in a purely visual way (no dialogue) really appealed to me.

Our location was amazing. We shot in Agua Dulce about an hour outside of Los Angeles. When I pulled up to scout it I got goosebumps. I was still debating about even doing the movie, but when I saw the barn and the old dilapidated house I knew I had to do this. The location (Caravan West Productions) is an absolute dream for anyone looking to make a Western. It’s not just 2400 acres of rolling ranch land. They also offer props, set dressing and even wardrobe! They also provided a horse and plenty of second-hand cigar smoke.

When I came back to it I saw a much more concise way of telling the same story.

The cast is composed of my friends. Actors I have known for a while so I knew they would get it. I wanted the performances to be bone dry. The absurdity of the story only plays if it’s set against a stark downtrodden reality.

Trevor Duvall was my producer. He put everything together while juggling his full-time gig. He even rented a truck and drove the camera equipment to and from set every day. He really went above and beyond for this little movie. I had many people (including Trevor) come out to work for free or at considerably discounted rates. I can’t thank them enough.

We shot on the Arri Mini. Since we were making a Western I decided to use Cooke anamorphic lenses to give us that widescreen look. I am really happy with the result. My Art Director David Ellis and my DP’s – Bernd Reinhardt and Nicolas Restrepo did an unbelievable job.

We shot for three days in the blistering heat of summer. The crew was very small with many people performing multiple duties. For my part, I made the poop. The night before the first day there I was mixing massive bags of instant potatoes with cocoa and water. I made ten gallons of completely edible cow poo and used every bit of it. You’re welcome! 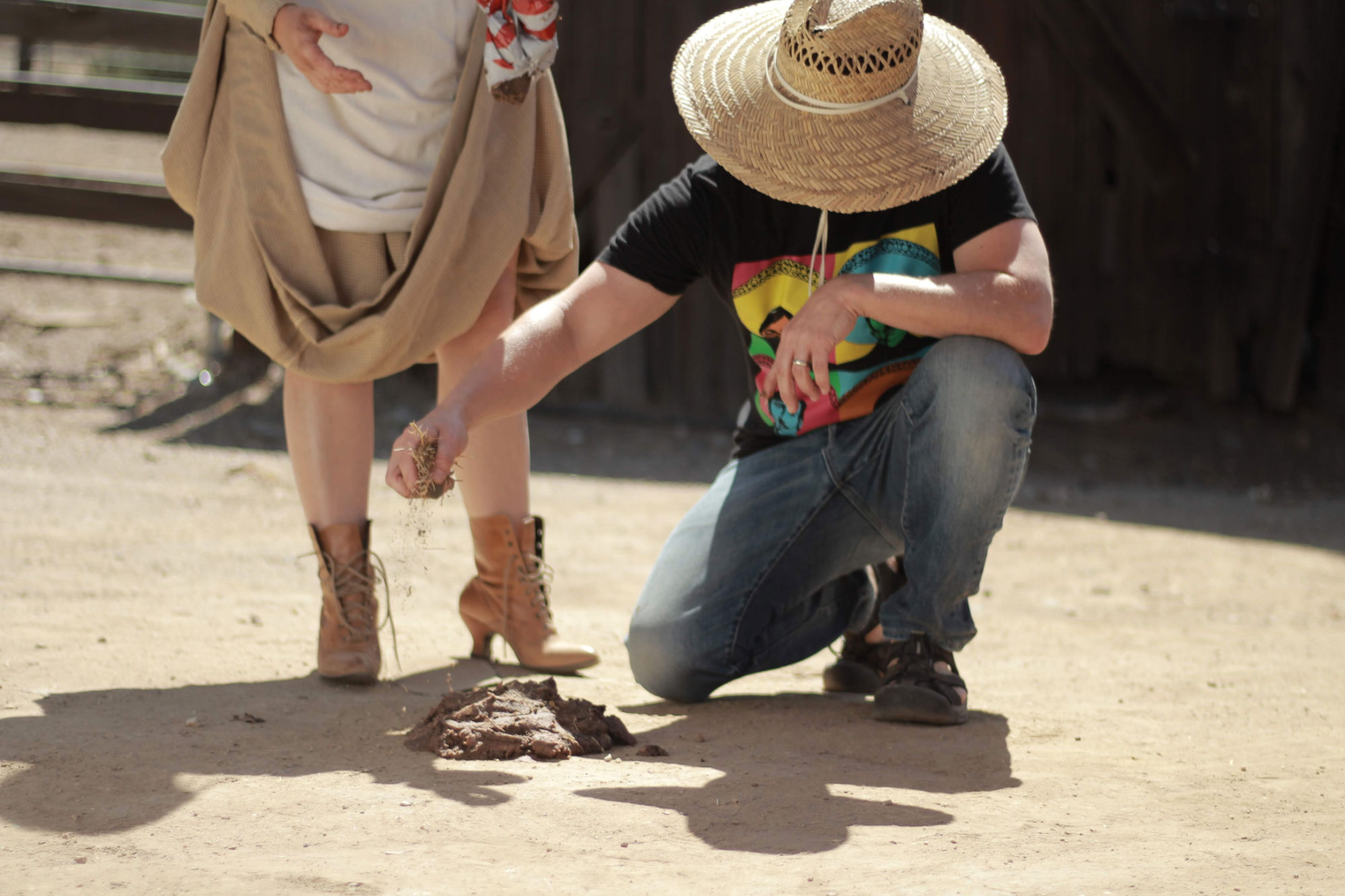 My prop master James Schexnaydre is a madman. Because we all work day jobs, James had to figure out a lot of his elements in the heat of the moment. Rigging feedbags to fall apart, rock walls to crumble, and wooden poles to topple on cue – he was like David Copperfield out there. My favorite was watching him “age” a mailbox (moments before shooting) by kicking it across set.

Pacing was crucial. LUCKY is a slow burn and I wanted to honor that.

I love post production. You don’t really know what you have until you get into the edit bay. I edited LUCKY myself on FCPX. Pacing was crucial. LUCKY is a slow burn and I wanted to honor that. The film came together pretty quickly. I had a rough cut within a few weeks.

Without dialogue, I knew the music would be a main character in the film. I was introduced to Alexander Schwarz via email. His first pass at the score changed everything. Like the performances, I wanted the music to play counter to the absurdity of the story. I told Alex not to worry about the music being funny. Working with him over the next couple of weeks really brought the whole film together as I had imagined it.

The film took about three months from principal photography through the final color pass. I am really proud of it, and again so appreciative of all the people who were willing to share their time and talent with me in order to bring it to life.