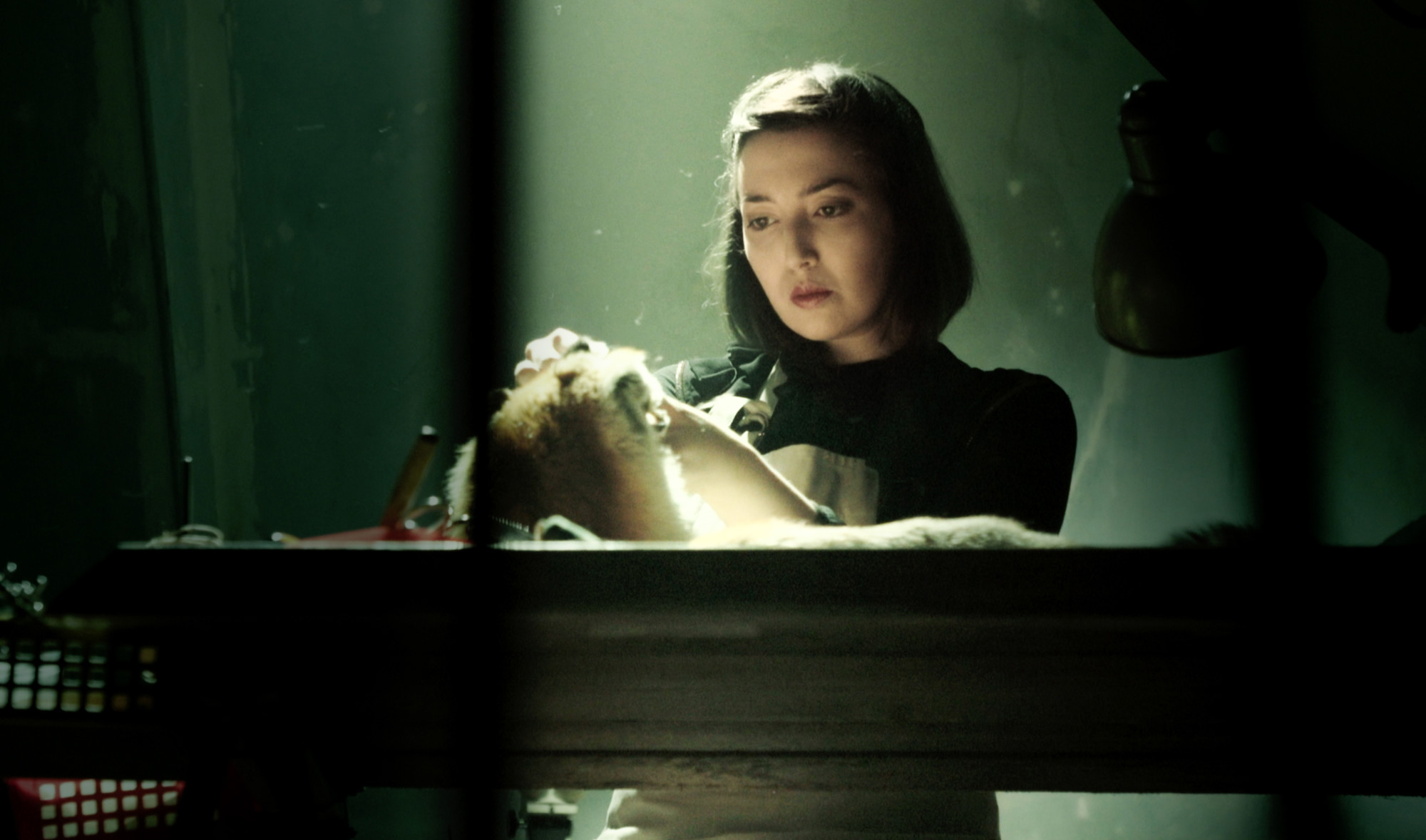 A darkly comic and irreverent depiction of the extreme bonds pet owners form with their domesticated friends, while at the same time showing little regard for the poor treatment and wholesale disposal of livestock, Dead Animals (Tote Tiere) follows a recently bereaved cat owner who discovers that death might actually be the beginning of a whole new lease of life for his beloved pet. Joining us for Dead Animal’s online premiere, writer/director duo David Oesch and Remo Rickenbacher talk unconditional pet love, unorthodox taxidermy and “the absurd measures grief can lead us to”.

How did your creative partnership begin?

David Oesch: We both come from Thun, a small town in Switzerland and have known each other for a long time. We teamed up to bring one of Remo’s slam poems to screen as a YouTube documentary essay. I like his vivid writing and his passion for realistic dialogue. So with my fondness for big melodrama we thought, why not combine our creative forces and write and direct a fictional short film together?

Dead Animals’ opening scene feels like an indictment on the discrepancy between the way we revere pets vs our treatment of livestock.

Remo Rickenbacher: We find this discrepancy very interesting: Pet owners get very emotional when their beloved cat or dog dies and they build a shrine decorated with photos and toys in the pet cemetery. In contrast, we dump livestock in a landfill and that’s it. 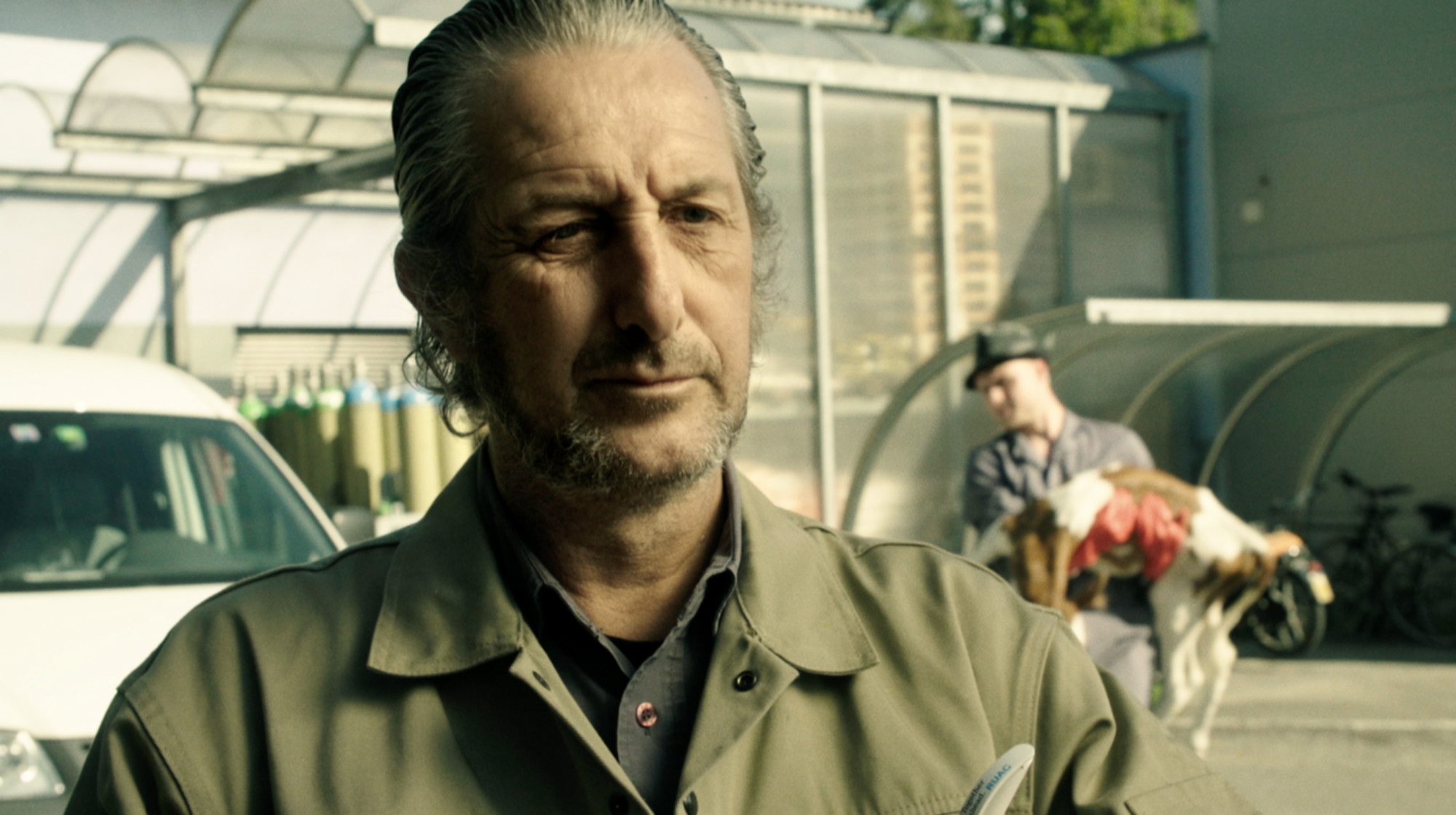 Another inspiration is the fact that many pet owners equip their pets with numerous character traits and think they always know best what their pets feel and want. But these wishes, hopes and fears tell us more about the respective owners than about the actual animals. To be blunt: Your cat likes you mostly because you feed her regularly.

The film is both striking in its settings and production design. How did you manage to secure such a grand location and also source that many stuffed animals?

RR: Thanks! We had a great production crew! The city of Thun let local artists work in the castle for half a year before it was renovated. This was a unique chance for us to shoot a movie in this magical mostly empty space. The stuffed animals came, for the most part, from the Museum of Natural History. A few schools also lent us some specimens. We transported all of them in a small Honda Jazz… It was absurd!

What was your setup for the shoot?

DO: We shot on anything that we could borrow from friends. Someone gave us his Sony FS5 camera and our DoP Ennio Ruschetti used his Sony A7s and Ronin Gimbal for the moving shots. He worked with zoom lenses to be quicker and pulled the focus himself. I think it was the most pragmatic shoot we’ve ever had with a crew of sometimes only 5 people.

I think it was the most pragmatic shoot we’ve ever had.

This also took a toll because we had only one professional sound guy when we recorded the dialogue. Pretty much everything else was sound design, done by Gina Keller. The budget was non-existent, therefore we did a crowdfunding campaign to fund the post-production. In post a lot of effort was put into sound and color grading to make the movie more fantastical. 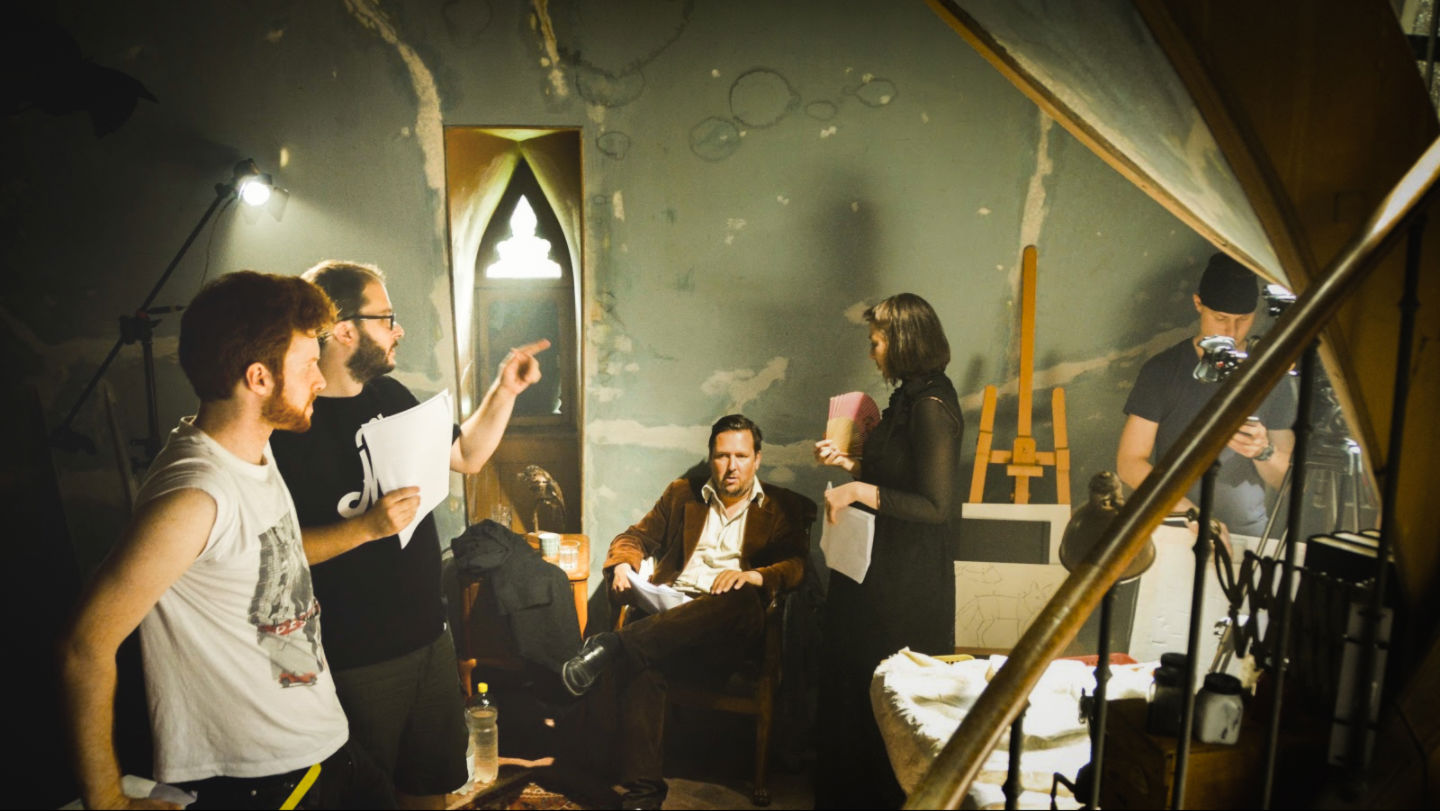 Could you tell us more about devising the various forms of the stuffed pets in the guest book?

DO: That stroke of genius is the work of Michael Shepherd. He is a comedy writer and Photoshop artist and we told him to go wild concerning the subjects. In the end, we made an official poster campaign out of it and hung them up at various film festivals and confused and disturbed some people, I guess.

Much of the film’s comedy comes from the awkward interaction between Nolundi Tschudi’s mysterious, deadpan taxidermist and Matto Kämpf’s befuddled, grief stricken pet owner – where did you find your actors?

RR: While writing the screenplay, we already had Nolundi Tschudi and Matto Kämpf in mind as our two lead actors. I’ve known Matto Kämpf – who is a well-known writer in Switzerland – for a long time. His unagitated and eccentric play fits perfectly with the character of the overstrained loner in our film. Nolundi Tschudi studied acting at the Zurich University of the Arts, where David received his Bachelor’s degree in “Film” at the same time. They got to know each other and they knew immediately that they wanted to work together.

Dead Animals screened as part of Swiss TV channel SRF’s short film night, how did that opportunity come about?

DO: Every year SRF hosts a short film night in November and we thought, let’s give it a try and send them our movie. Because of the very graphic scenes at the beginning of the film, we really didn’t expect that they would broadcast it but they did! A classic TV broadcast reaches completely different people and I think it’s great that Swiss Television dared to broadcast the film. Even if it was after midnight.

Our main goal isn’t to provoke or shock. Rather we want to show the absurd measures grief can lead us to.

People are notoriously passionate about their animals, have you had any blowback about this irreverent presentation of departed pets or eager interest in their unorthodox stuffed poses?

RR: Fortunately we didn’t experience any major blowback. Yes, we show a few unorthodox stuffed poses of departed pets but our main goal isn’t to provoke or shock. Rather we want to show the absurd measures grief can lead us to. So we made an effort with our editor to concentrate mainly on the characters and their feelings. At the world premiere at the Solothurner Filmtage, the oldest film festival in Switzerland, in front of 600 people we were completely surprised how touched the people were. It was beautiful. 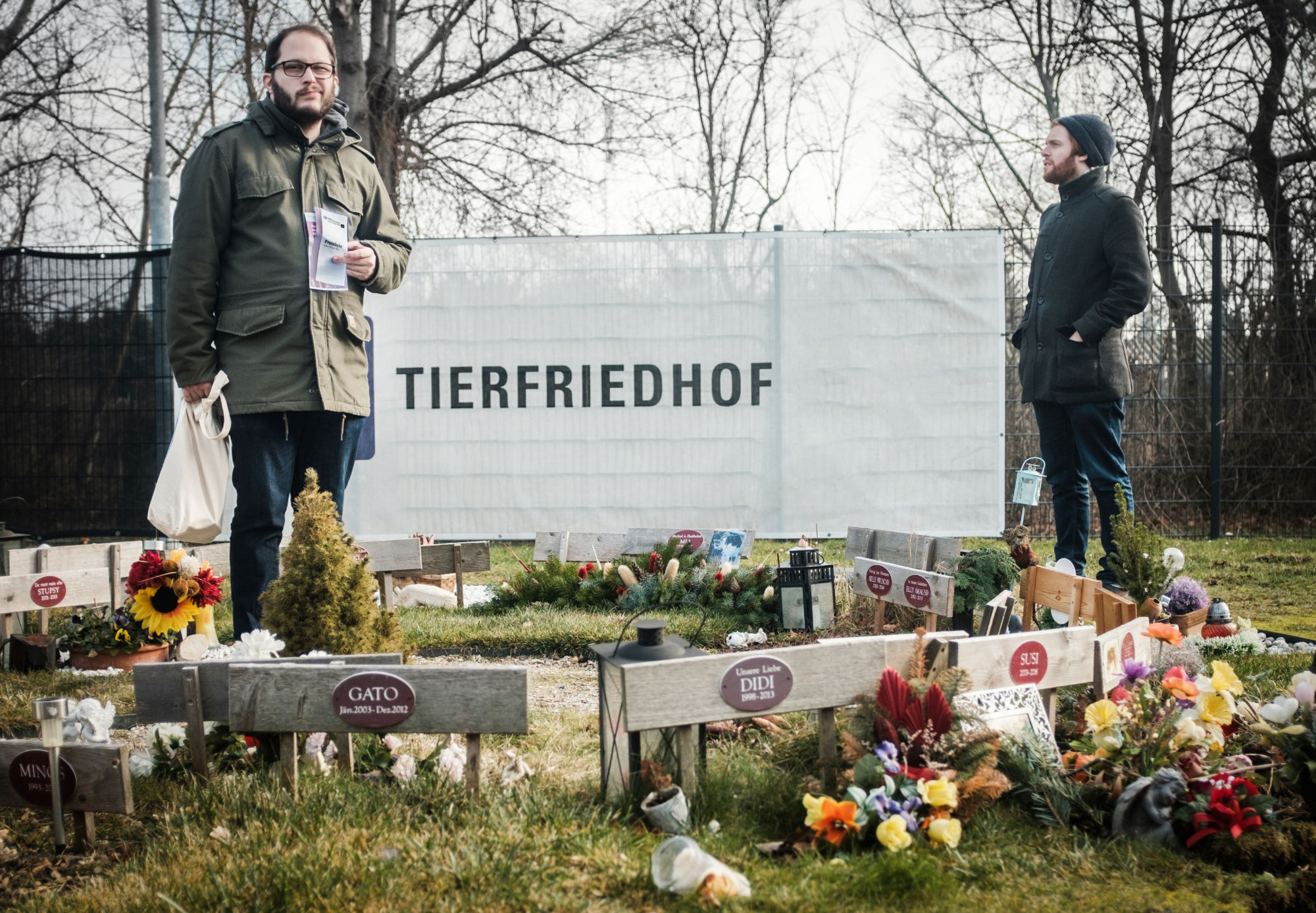 What will we see from you next, either in collaboration or individually?

DO: With my new short film CRU (RAW) I would have celebrated my New York premiere at the Tribeca Film Festival but this will not happen in these pandemic times so we want to focus on our first feature script.

RR: It’s a horror movie about lying and it will be, similar to Dead Animals, full of absurd ideas and dense atmosphere, but much darker.

Directors Notes is honoured to present the premiere of Dead Animals on our pages today. If you would like to join the filmmakers sporting a fetching DN Premiere Laurel, submit your film now.