There’s been an understandable rush of films dealing with themes related to the global pandemic we’re collectively enduring but few of them grapple head on with the spectre of death which has overshadowed us. Inspired by his personal fears during lockdown, Dead Dad from Bailey Tom Bailey (last seen on DN with body drama Circadian Rhythms), transforms Covid-19 concerns into a dark quarantine comedy about a family struggling to let go of a loved one. Shot at his parental house and featuring his real family, Bailey returns to discuss socially distanced filmmaking, taking his first tentative leap into the dual roles of actor/director and compositing genitals.

Taking a break from developing my feature project Sharp End, I decided to answer a few competition calls to make lockdown shorts. I am staying with my parents in Reading during the lockdown, which gives me a bigger set and cast. The process was quite liberating as the limitations meant most production headaches were sorted. I accepted working with what I had and hoped audiences would be understanding of those limitations.

The ideas grew out of the location, personal fears and details about my family. At the end of my parents’ garden is a silver birch tree, which perpetually overshadows a raised mound of wildflowers. I imagined something beneath that mound, and that notion became filled with my anxiety about my ageing Dad dying from Covid-19. We had already watched one funeral (not covid related) via webcam, and I wondered what the extreme reaction would be to losing someone. The title and idea definitely felt like I was tempting fate, which did have me guilt-tripping. But it was relieving to have a laugh at these immense fears and from the response to the film, discover that I wasn’t alone in needing one.

The process was quite liberating as the limitations meant most production headaches were sorted.

My work often centres on the human body, and my Dad’s ageing skinny but muscular body was interesting to photograph. The images I pictured reminded me of Ron Mueck’s miniature sculpture of his deceased father Dead Dad (1996), which is horrifying and moving but also quite funny in its proportions and stark presentation. So I promptly stole the title. 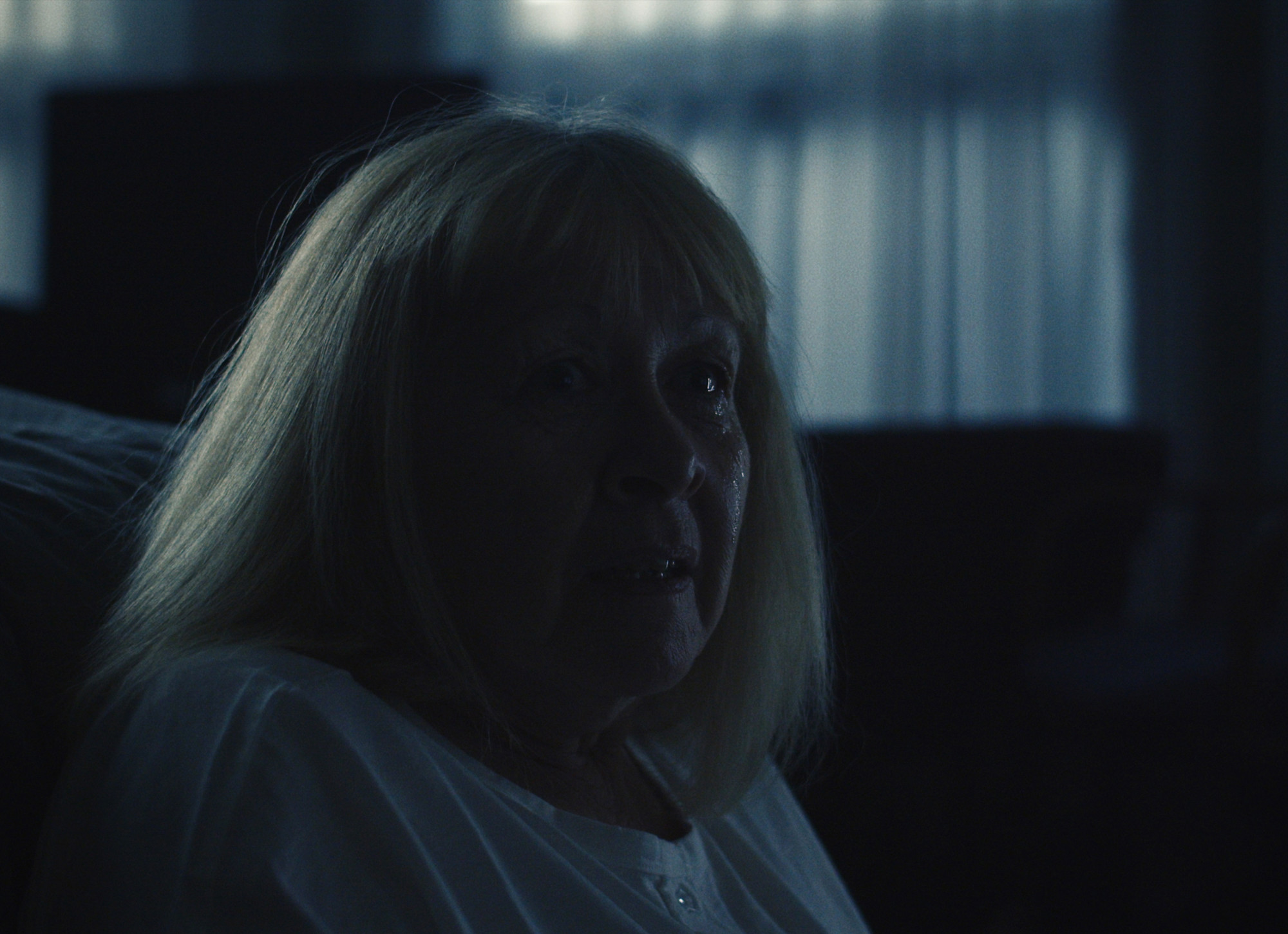 Another key to the story came from my mum. Since her parents passed away a few years ago, her nightmares have become animated: she yells out in an unrecognisable voice and thrashes around. It’s as if there is deep-seated grief she hasn’t resolved. After cycling through several ideas for endings, I came up with this darkly comic and thematically appropriate punchline.

It was beneficial to shoot in a location I was living in and be able to keep trying things out as I developed ideas. I based the look around what already existed in the house, aiming for a desaturated green and neutral/khaki colour palette. I decided to try a 4:3 aspect ratio as we were working in tight spaces, and it suits my tendency to use centralised compositions, wide lenses and cover scenes in singles. After that decision, I worked in some angular compositions inspired by movies from the 30s/40s.

In my last few projects, I have created an animatic of the whole film to try out pace, tone and overall feel of the film. It’s also an excellent tool for communicating with crew and getting them excited to come on board. This time I was able to insert tests and stills as I made them. On set, I find it makes me more open to new ideas, which happened several times on this shoot.

Before the shoot, we held a little rehearsal, and I was pleased to find that my instincts were right; my mum could act if suitably reassured, which boosted my confidence in covering more scenes in singles. This working situation meant I was the calmest I have ever been in prep, production and post. We worked fast, and it was about three weeks from conception to posting online.

The cast was my family, and while I took on most crew roles, the rules were beginning to ease when we shot and so my family agreed to allow two people into our home to help me film. That was DP Simon Stolland, an old school friend who has had recent success with Shiro’s Story and Blue Story, a great all-rounder who even doubled as the sound recordist! He brought with him gaffer Vianney Kernanet Huggins who worked on The Crown. The crew had been isolating as well, we all used PPE, distanced while we worked and they brought their own food, but this was still the most concerning aspect of the production. So our fears were eased most by the fact no one became ill, we survived that and as the restrictions were easing it felt like the first step out of lockdown.

Both Simon and Vianney generously brought kit, which meant my budget for the whole shoot was less than a hundred quid for costumes and FX make-up. We shot on Simon’s Black Magic 4K camera with Rokinon Cine lenses: we were on a 35 most of the day, occasionally using the 25 and 50. All but the opening scene was entirely static.

When Simon and Vianney arrived, we walked through the schedule, which I had designed around using natural light for daylight scenes. Vianney shaped these scenes with flags and diffusion frames. We had to blackout the living room so we could shoot a night scene before my baby nephew got too tired and lit mostly with practicals. Our final scene in the bedroom was moonlit and involved sticking an Astera light tube high up on an American stand outside the window; those little tubes are so powerful! Inside we used a softbox to backlight the main shots and a wild Astera to backlight the reverse.

The biggest challenge was directing myself. I recently completed a year-long part-time Meisner acting course, so it was fun to put that into action, but I had to remember not to self note while I performed. Overall, it was a great team effort, crafting these precise images. 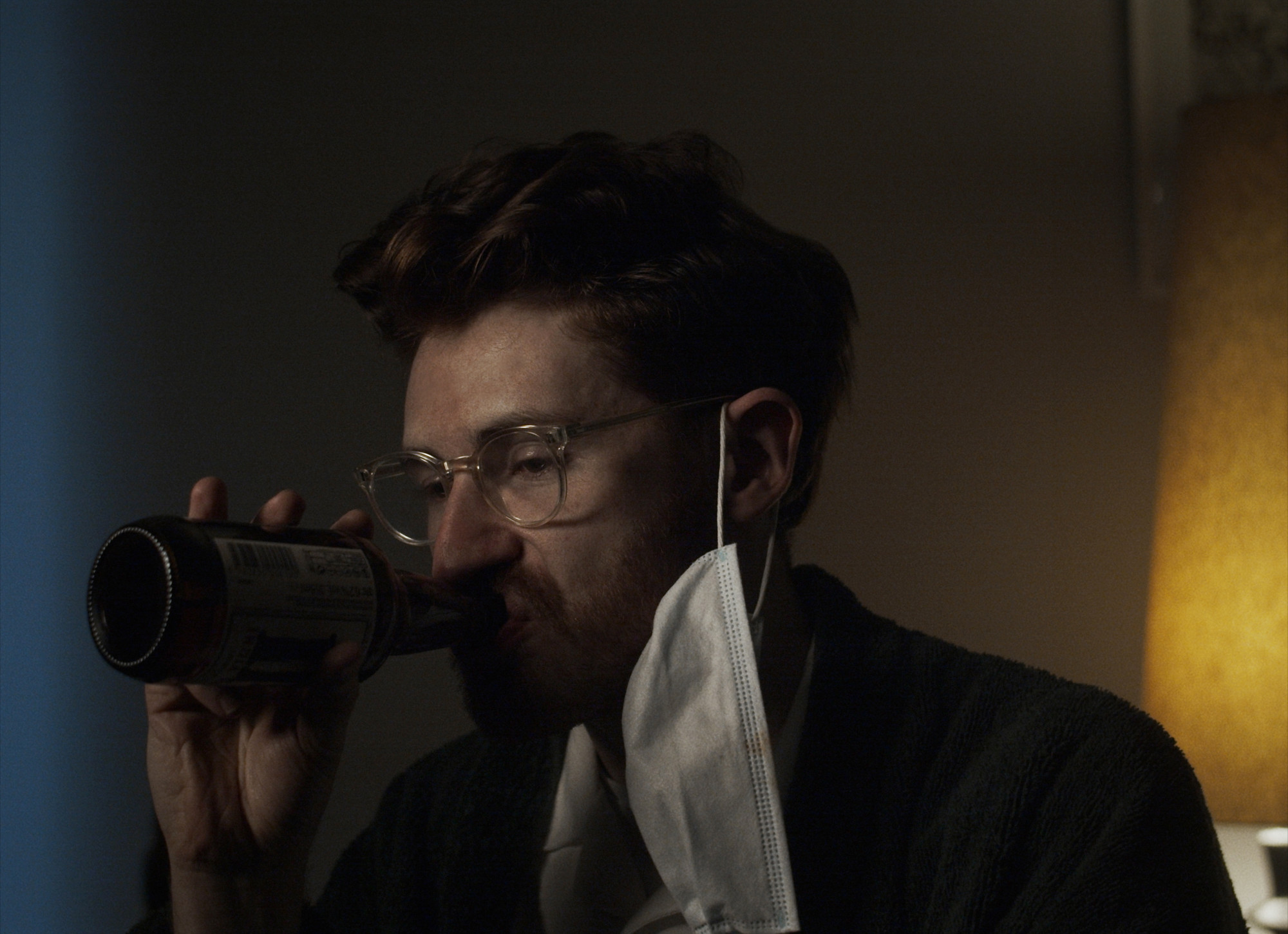 In post, I was pleased to be able to have support from: Stefano Fasce our composer who had produced demos before we even shot, Berry Cookman on sound design and colourist Myles Bevan of Time Based Arts. They all did my last short The History of Nipples and had great patience with my tinkering.

It was liberating to return to a rapid DIY mode of production.

The picture edit itself came together fast but there was a steep learning curve involved in a couple of the composite effects shot. One scene where I hoped Dead Dad’s underwear would not be visible called for some kind of patch. After tinkering with androgynous genital bumps and trying to conceal but match the correct lighting, I thought ‘this is daft, I’ve got one right here’, so I snapped my privates and stuck it on there. I reasoned it’s dark and you barely see it… I hope.

The project has turned out well, and it was liberating to return to a rapid DIY mode of production and try out some new things. I’m currently developing a short that grew out of the same idea as my feature, both are called Sharp End. The short is a psychological thriller with a streak of dark comedy. It’s about a metropolitan woman who struggles to hide her mysterious sexual fixation on safety pins from her husband. We are in the later stages of development and seeking funding.

Dead Dad is one of the many great projects shared with the Directors Notes Programmers through our submissions process. If you’d like to join them submit your film.