Self-Love Is the Cure for a Broken Heart in Dan Lesser’s Vibrant Coming of Age Short ‘Come on Eileen’. 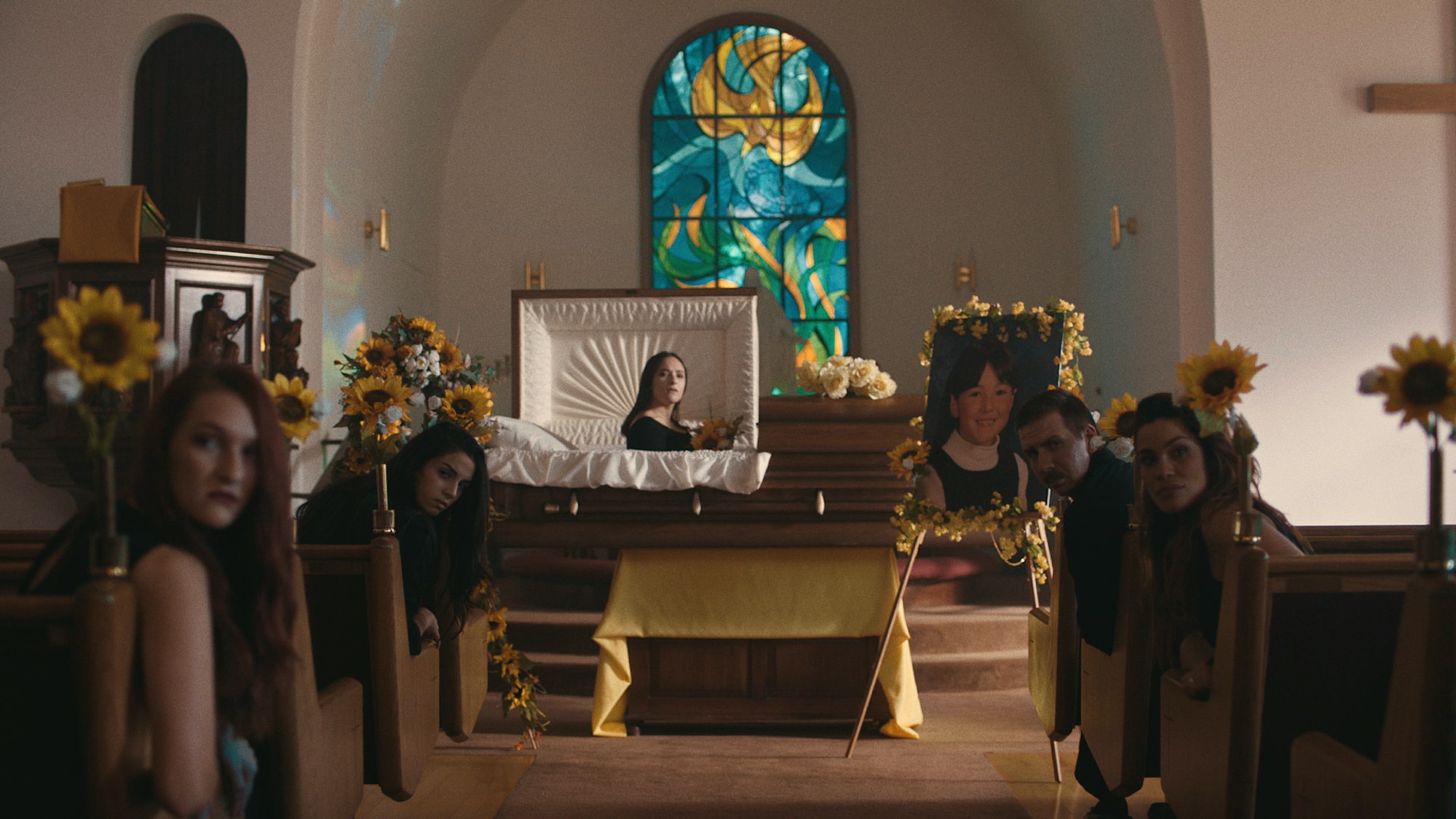 Dan Lesser’s Come on Eileen is another great example of a coming of age film that embraces each aspect of the filmmaking process to generate something bold, cinematic and emotional. It tells the story of, you guessed it, Eileen who is wrestling with a broken heart and a troubling mental state. The film is visualised through Eileen’s perspective which Lesser utilises to pack each frame with a pulsing vitality. DN is excited to Premiere Come on Eileen today, and caught up with its director to talk the significance of colour, sound, and letting the audience into Eileen’s mindset.

I loved the mixture of fantastical elements and real-world emotion in Come On Eileen, it really gives it a sense of vitality. Where did the story for it begin?

This was one of the few ideas that I had buzzing around my head for years before we had the opportunity to make it a reality. It was early in my time at university that I was struggling with anxiety, depression and my relationship. I started trying to attend therapy but I found that it was such trial and error, lots of different doctors and lots of awkward conversations. I’ve always dealt with pain through humour. So, I decided to take the feelings of feeling trapped in my own head and struggling to love myself and put those feelings into a film. What formed organically was the character of Eileen, a young woman who hated herself but had every reason not to.

What was the next step? Did you flesh out that character and concept into a screenplay?

I knew that for a project as personal as this, I had to surround myself with artists that I could trust and could make this movie their darling. It started with the script. I spent about four months writing the first draft and developing the character of Eileen before joining forces with my screenwriter Jake Naturman. Through thirteen drafts of the script we continually focused, stripping away redundant characters, combining scenes to singular beats, all refocusing around Eileen’s story.

One aspect of this film that was extremely important to us was building this world beyond just a traditional coming of age story, which I’ve always loved, but letting the audience into Eileen’s mindset. Exemplifying her insecurities, depression and anxieties through these windows into ‘fantasies’, raising the emotional stakes for her and the audience alike. We really didn’t want to simplify Eileen to just her illness. A realisation that I came to, personally, through this production was ‘that depression is part of me but it isn’t all of me’ and we knew we had to give Eileen the same respect. 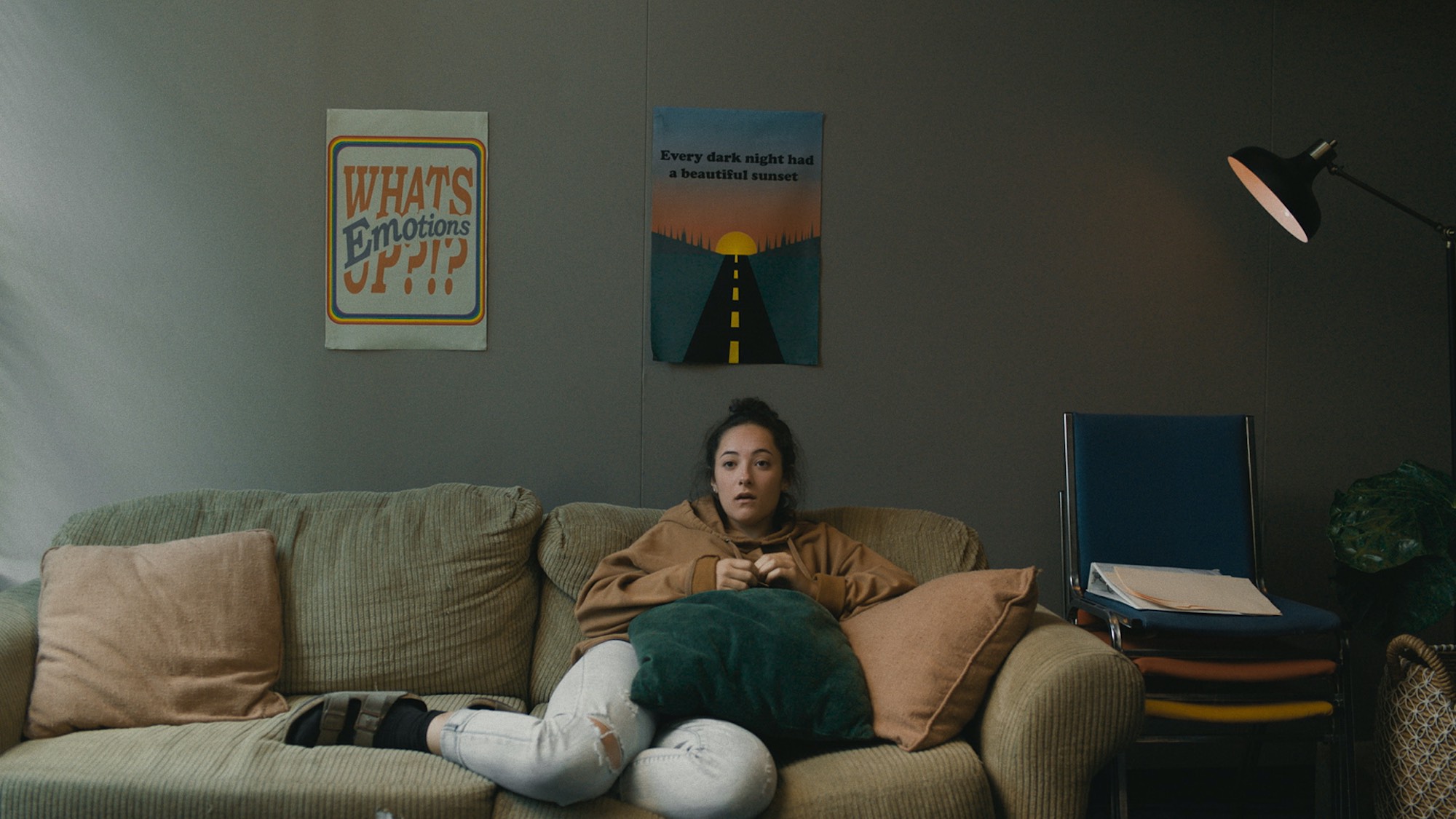 In terms of actualising Eileen’s mindset and those fantasies visually, what was your approach?

We shot on the Arri Alexa Mini with a set of Cooke S4i primes, to gives us a cinematic but organic look. We lived mainly on tripod, with some Steadicam during the party-dance scenes. Throughout production, we aimed to attack every aspect of the film from a character motivated standpoint. Almost the entire film is from Eileen’s point of view, so it was important to us when working with my trusted DP of seven years Neema Sadeghi and old friend Nick Franklyn with Production Design, to use every aspect in our frame to raise the stakes of Eileen’s struggle.

One aspect of this film that was extremely important to us was building this world beyond just a traditional coming of age story.

We assigned the colour yellow for Eileen and the colour blue to Josh. In the opening funeral scene, we see lots of yellow and warm tones since we’re in her world. But then when we’re at Josh’s birthday party we clothed extras in lots of blue and lit the scene with majority blue light to drown Eileen in someone else’s element. We took this down to the costume design also, the sweater that Josh gives Eileen is blue, and in the opening funeral fantasy Josh wears a blue plaid suit jacket and at the end of the film Eileen is in yellow.

I think you did a really great job of creating these characters and their emotions on screen. Each one of them feels full of life and exciting, it almost has the sensibility of a musical. You must be really proud of their work too?

I owe my life to our amazing cast. Mirlande Amazan who played the therapist Lee, Owen Painter is now a best friend and my roommate, and Allison Roberti who played Eileen are all gems who opened their hearts to this film. I especially am thankful for Allison and Owen who worked with our choreographer Alexis Roberts so we could nail the dancing numbers in the film. We felt strongly that the actors had to know the moves well enough that they could throw out the formalities and let the moves live organically in their own bodies.

Given how small your budget was and the ambition of Come On Eileen, were you able to get everything done smoothly in the edit and sound design?

I tend to forget how wonderfully challenging postproduction can be. We had a short turnaround time for our initial edit, about three weeks. It was a constant balancing act between Eileen and Josh’s relationship, we had a couple versions were Josh was too nice and understanding that it weakened our connection to Eileen. Once we went through the film and used takes where Josh was more distant and standoff-ish we landed where we needed.

It was important to us to use every aspect in our frame to raise the stakes of Eileen’s struggle.

Sound design and music are some of my favourite processes in post. Our Sound Designer Joshua Seigel worked tirelessly to originally record all foley and crowd noise for each crowd scene allowing us complete control to write the emotional narrative of the film through sound effects. Our Composer Daniel Crane worked fast enough to get us some important pieces of music, mainly the piece of music that ends the film, before production so we could play it for Allison on the day.

Reflecting on the film as a whole now, how long did it all take from start to finish? Did you make any revisions?

From writing the script to our final delivery was about a year and a half. After our first delivery, we screened the film to an audience of family and friends and then after about a month hiatus, revisited the film trimming about 15 seconds from it, in addition to polishing up our sound design overall.

Has the current global situation affected anything you’ve got coming up?

I’m finishing up some final touches on another short called Friends Don’t Die a dromedary-horror film following a sibling-run punk band performing during a zombie apocalypse. In addition to venturing out into the documentary world with an exciting project centering around the Covid-19 pandemic, which I’m really excited about.

Pandemic filmmaking is a challenge, with so many processes being remote it’s really pushed me to focus with my collaborators to work even harder to get on the same page about our vision for each aspect of the project. And it’s taught me a lot about patience…especially in a home with slow wifi.