At the beginning of lockdown in the UK, director (and DN regular) Rob Savage pulled a prank on a Zoom call with his filmmaking compatriots. He successfully spooked his friends with an edited clip of himself investigating strange noises coming from his attic which he had cleverly spliced with footage from Spanish horror feature []Rec]. Once Shudder caught wind of Savage’s prank, which went viral, they approached him with idea of expanding it into a fully fledged feature. Now, we sit here as lockdown is being eased and Savage’s feature is out in the world. After seemingly terrorising everyone under the sun, Savage spoke with DN about the journey behind Host, revealing how he capitalised on the current worldwide situation.

Host was born out of the viral video that you created at the beginning of lockdown. What spurred you to expand it into a feature?

At the start of lockdown, everyone was sarcastically talking about the possibility of a movie shot entirely on Zoom, we were all expecting it and nobody was looking forward to it. The video came out around a month into lockdown, and by this point nobody had risen to the challenge. All of my closest friends work in the film industry, and we were already hanging out over Zoom almost every day. We just felt, why not us?

We threw some ideas around but didn’t land on anything concrete. When I woke up the next morning, I had a text from Jed. Two words: Zoom Seance.

What inspired the idea of a group seance as the reason for the Zoom call?

When I had the idea of making a Zoom-based feature, the first person I called was Jed Shepherd, who I’ve worked with on a number of shorts. We threw some ideas around but didn’t land on anything concrete. When I woke up the next morning, I had a text from Jed. Two words: Zoom Seance. It really was as simple as that. I’d made a TV movie a few years prior that featured a medium character, and so I’d interacted with many as part of my research and had always been fascinated to bring a truly authentic seance to people’s screens. 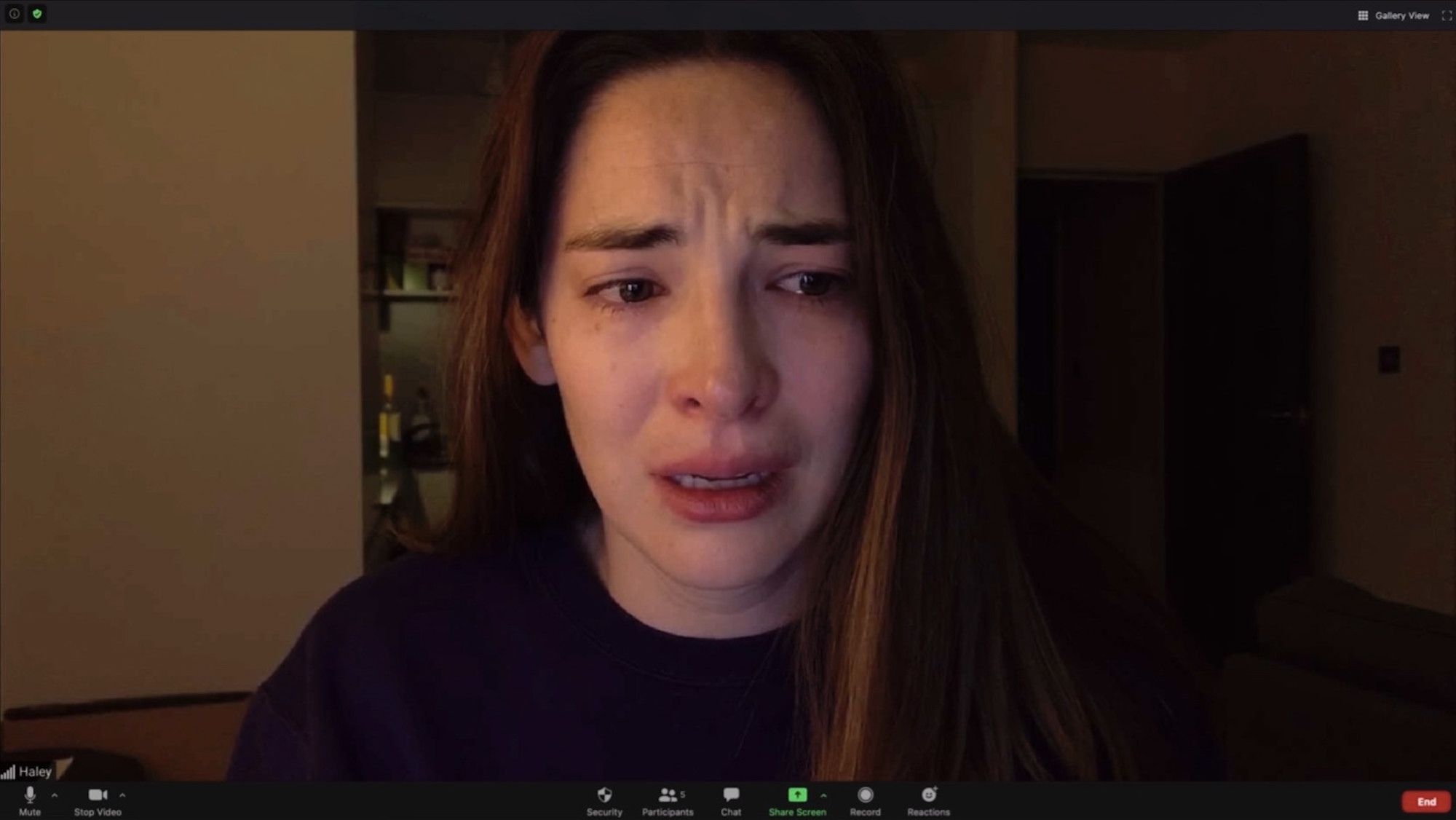 How did you breakdown the shoot, was it shot in segments or scenes or in one whole take?

We actually shot all of the stunts, scares and set pieces first, because I was keen to have the footage to playback to the cast in real time, so we would be able to capture genuine reactions. We kept details hidden from the cast so that they only knew what was going to happen to their character, and not to anyone else. Because of how technical every scene was, we shot in segments and would rehearse, improvise and shoot take-after-take until we had enough material, and would then move on the next scene – always working chronologically so that we could see the film play out scene by scene as we shot.

Was it important for you to have a balanced level of scepticism across the group?

Absolutely. We didn’t have time to deliver a full script, and instead created a 17 page beat sheet which me and the actors could work from each day. One of the most important aspects of this document was to provide the cast with objectives for each scene, that I would be able to use as a jumping off point when shooting. Part of this was introducing a voice of scepticism, Radina who would often have the task of deescalating and providing rational explanations, while Haley held a greater belief in the supernatural and would try and make the group engage in the seance.

So many great scares! Were any of them particularly difficult to execute?

The very first stunt we filmed, which involves someone crashing down from the ceiling and splatting on the floor, was particularly tough. Not for me, I was sitting at home in my dressing gown, but for our stunt co-ordinator Nathaniel who was performing the gag. He was suspended by a rope, having to hold a plank position for up to three minutes while a scene played out beneath him. Then, he would be released and would free-fall until, at the last moment, a mechanism would kick in to soften his landing. The very last take, the one that we used in the film, we dropped poor Nathaniel but the mechanism didn’t kick in. He slammed to the floor like a sack of potatoes, thankfully didn’t die, and absolutely made the shot. 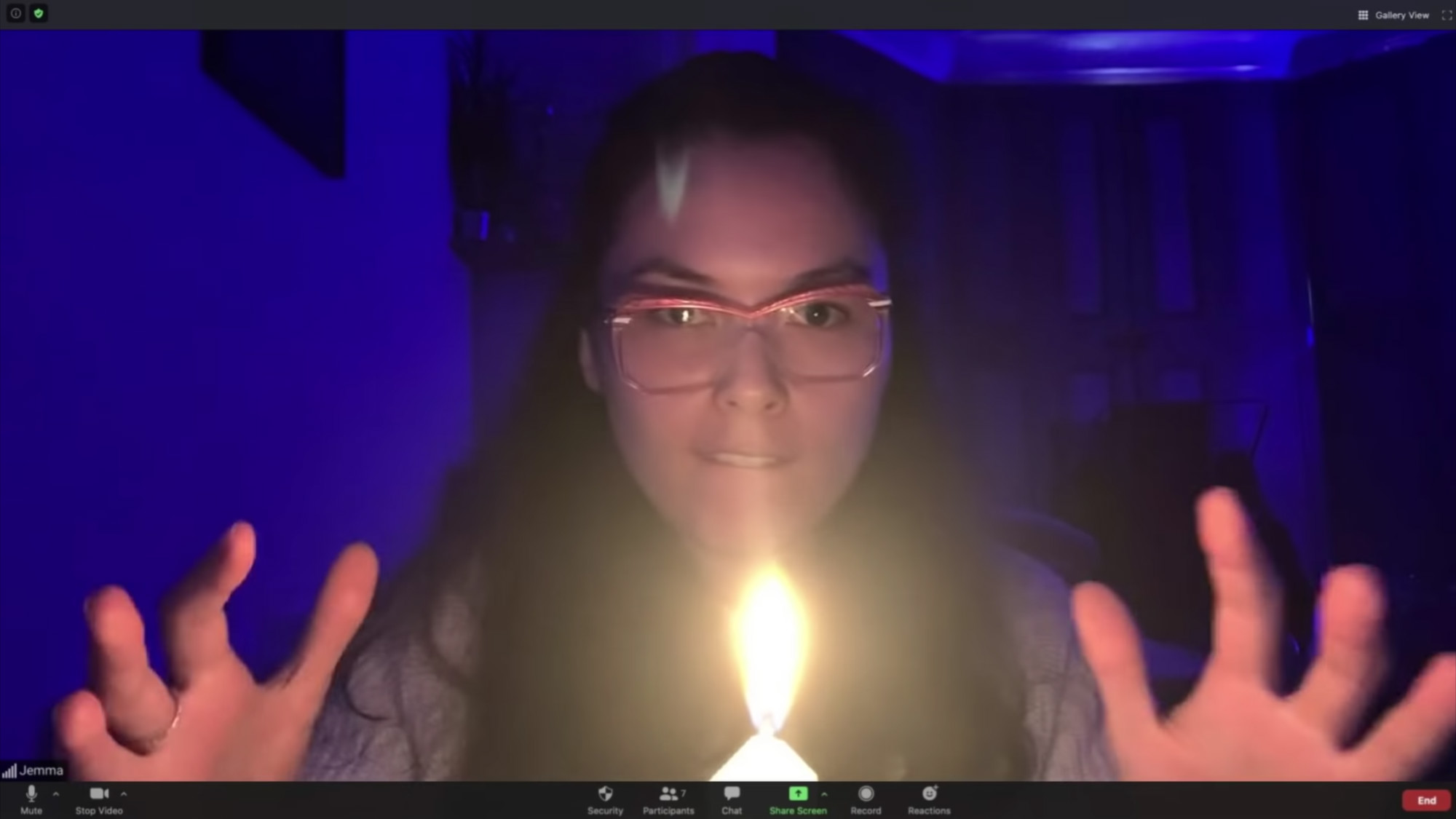 How did you find the practicalities of remote directing? Was it more challenging than you expected? Were there any perks?

I have to say, initially I was very nervous about the process but ultimately it felt very similar to working on a normal set. As a director you have to learn to be concise and clear with your direction, and while the energy was different because we were in separate locations, it was a really exciting and creative process. The main perk was when I had the realisation that, by filming remotely, anyone with an internet connection could be part of our movie. With everyone on furlough, we were able to rope in some amazing collaborators to help elevate this film beyond what could have been achieved under normal conditions.

As a director you have to learn to be concise and clear with your direction.

FInally, it’s been announced that you’re working with Sam Raimi on a supernatural feature, what can you tell us about that?

Not much, but I can tell you that working with Sam is an absolute dream. He’s one of my filmmaking heroes, and his love for the medium is so infectious. Jed and I came up with the idea, which is something we’ve never seen before in the horror genre, and, all being well, we hope to be able to shoot next year.