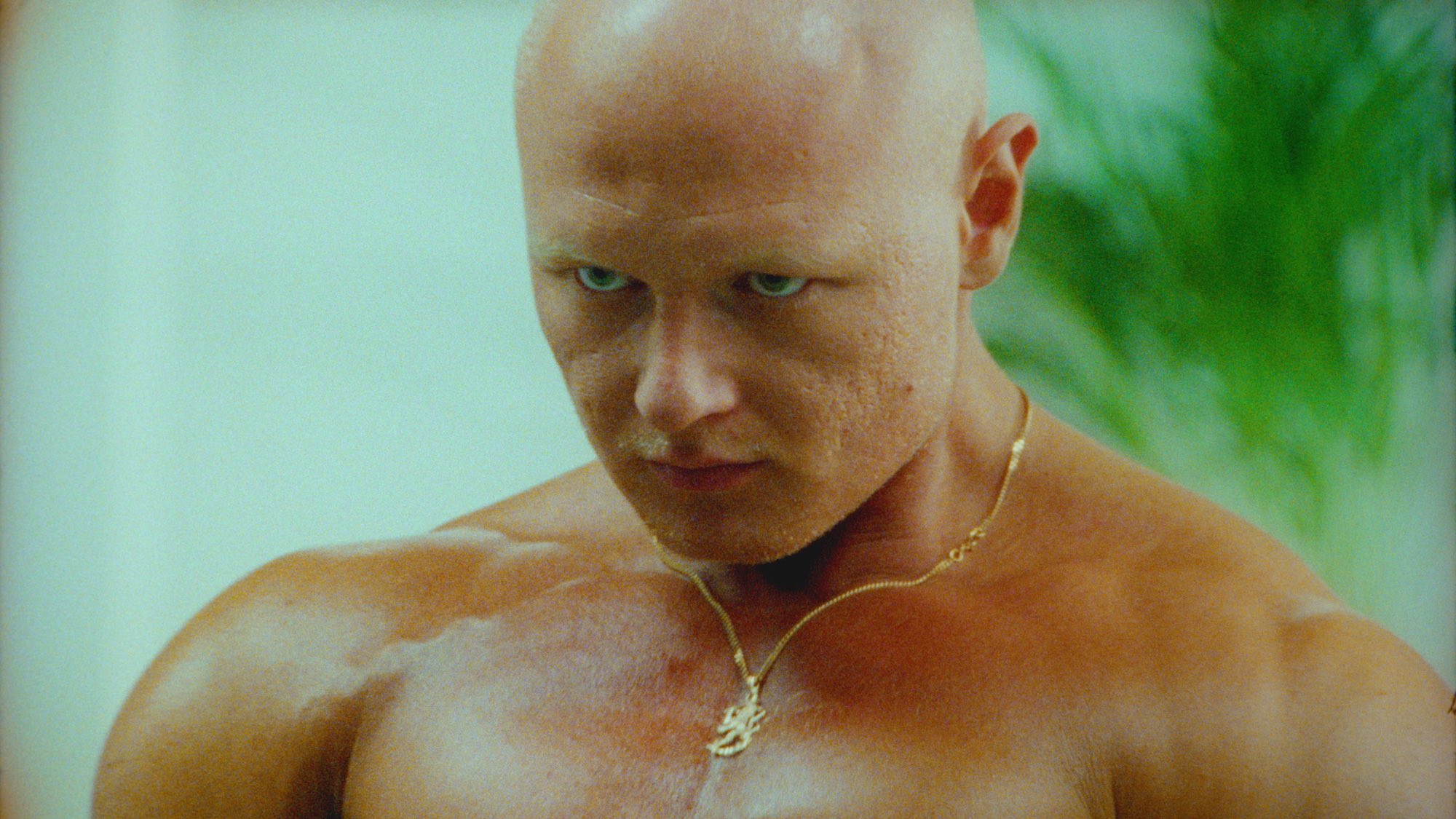 In their brilliantly baffling comedy short Flex, Josefin Malmén and David Strindberg track the self-obsessed thoughts of a bodybuilder as he admires himself in the mirror. Malmén and Strindberg’s film invite us into the inner workings of the mental state that produces such hulking results, with a plethora of surreal god-complex visualisations thrown in for good measure. We caught up with the Swedish writers-directors to discover how their self-loving and self-loathing as creatives inspired Flex’s bizarre inner journey of ambivalence .

I’m curious to know what you drew upon when developing a screenplay of a bodybuilder who is simultaneously self-loathing and self-loving?

The script, and the concept, of the swift shift between self-loathing and self-loving, was inspired by our own experiences as filmmakers and creatives. The creative process, for us at least but we think many would agree, is a constant rollercoaster of light hubris and complete self-loathing, more often the latter. And making this film was no exception: “This is great, this completely crap, well at least it’s original, it’s bad, this is great”.

What made you select a bodybuilder as the centre this concept?

The idea of telling it through a bodybuilder was to get a distinct contrast between feelings of doubt and an image we often perceive as invincible, but beneath we’re all just the same. Funnily enough, Calle, the bodybuilder, describes himself as an introvert which is interesting.

The swift shift between self-loathing and self-loving was inspired by our own experiences as filmmakers and creatives.

Did you lean into that juxtaposition when thinking about the visual effects too?

The idea of an electric, levitating character with hollow insides and multiple micro-sized clones is one that we’ve tried to pitch for music videos in the past without any success and finally decided to incorporate into a short film. We actually have an unfortunately large bunch of neglected ideas lying around that we’re now thinking of transforming into short films instead.

Mixing a slightly raw, grainy 16mm film look and visual effects is also something we’ve been wanting to do for years and pitched over and over again, but weirdly enough no one else has been equally keen so we’re thrilled that it finally got made, albeit on a smaller scale. So, we shot with an Arriflex 416 on two rolls of Kodak Vision3 500T, pushed one stop. Using a Canon 10-160mm T2.2 and Arri/Zeiss 6mm Ultra Prime S16 T1.3. Our ambition to use high-end equipment with this wouldn’t have been possible without the time and talent of a small bunch of absolutely brilliant people who helped us realise this.

You’ve mentioned that this is a smaller project for the two of you, how small a production was it?

On the shoot we were only six people: us two, the DP, one AC, a gaffer and our lovely bodybuilder, and everyone gave everything they had. We’re forever grateful for that. Our love for extremely small but extremely talented crews is ever growing. We had a tiny budget ($1600 in total) meaning limited time, equipment and resources but it turned out exactly as we hoped for.

And was it a fairly quick turnaround?

We wrote it and started prepping early May and shot it later that month in a small dojo in Stockholm between Ninjutsu classes. Had a little hiatus during the summer (as it’s a very precious time this close to the arctic circle) and finished it up in September.

The creative process is a constant rollercoaster of light hubris and complete self-loathing.

Has the pandemic shifted the film’s journey at all?

We’re normally based in London but were in Sweden for a shoot when everything happened and then just decided to stay here for a while. As I mentioned, for Flex we kept the production super small, but that wasn’t really a problem since we love skeleton crews. It also meant that we’re now also set designers, stylists, caterers and baby oil specialists.

What projects do you both have coming up?

Together we’re writing a new short film with the logline “Hot alien descends into a stiff family home and stirs things up” while trying to get some funding for a not-as-out-there-but-kinda-out-there mumblecore/sci-fi/road movie/musical short set in the mountainous landscapes of northern Sweden. There’s also plans of a dance film including skinheads, shopping trolleys and whitewash detergent falling from the sky, but we’ll have to see about that.