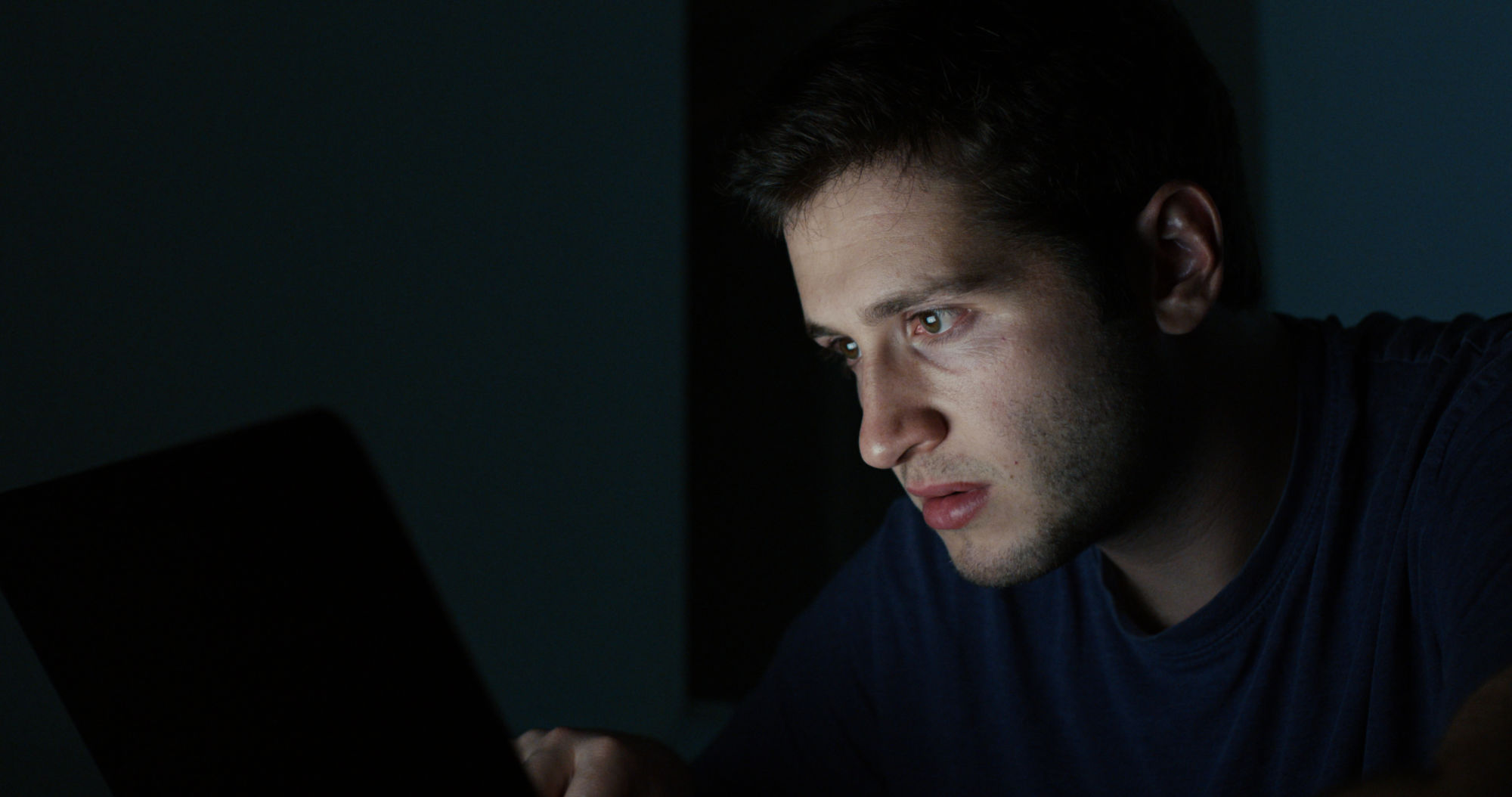 Do you remember the horror of accidentally deep liking an ex’s photo, inevitably alerting them to your online stalking of their every move? From your perspective, it’s a sinking feeling of dread and sickening realisation that you’ve been found out. Now flip that over and imagine how that ex feels knowing you’ve been trawling through their photos. Our existences are all too public these days but does that not give us the right to privacy from those we have separated from our lives? In his creepy as hell short One to One Matt McClung dives deep into this quandary and makes the hypothetical all too literal. Carefully interlacing both sides of the tale, McClung cleverly inserts comedic moments to lighten the load whilst not taking away from the seriousness of this disturbing ‘what if’ scenario. We invited the LA based writer/director to explain the origins of One to One’s concept, how he found the correct tonal balance and used audience feedback as a clarifying tool in the edit.

Where did you find the inspiration for a virtual stalking made literal story?

I was thinking about how bizarre our conduct on the internet can sometimes feel – how casually stalking a stranger online seems like universally accepted behavior, and how upsetting that would actually be in real life. The idea of there being a very literal consequence to what feels like consequence-free behavior – in this case, someone having a physical expression of their online persona – both amused and horrified me. It felt right to use this premise to explore the confusing aftermath of a breakup, and how someone you’re supposed to be ‘over’ can also be the same person whose profile you’ve been regularly haunting.

The idea of there being a very literal consequence to what feels like consequence-free behavior both amused and horrified me.

All of these ideas were rattling around in my head, along with a desire to do something very visual. It also seemed like an opportunity for my collaborators and I to make something that was tonally unique and still connected emotionally with an audience.

How did you balance the horror of having someone stalking you with the comedic elements of the film?

That was tricky. Besides carefully designing our color palette and working hard on our score and sound design which are the usual elements that signal tone to the audience – we tried to make sure that any creepy or boundary-crossing behavior came out of a very human impulse. That was a big reason why the story centered on a former relationship, as opposed to someone stalking a person they had no previous connection to. 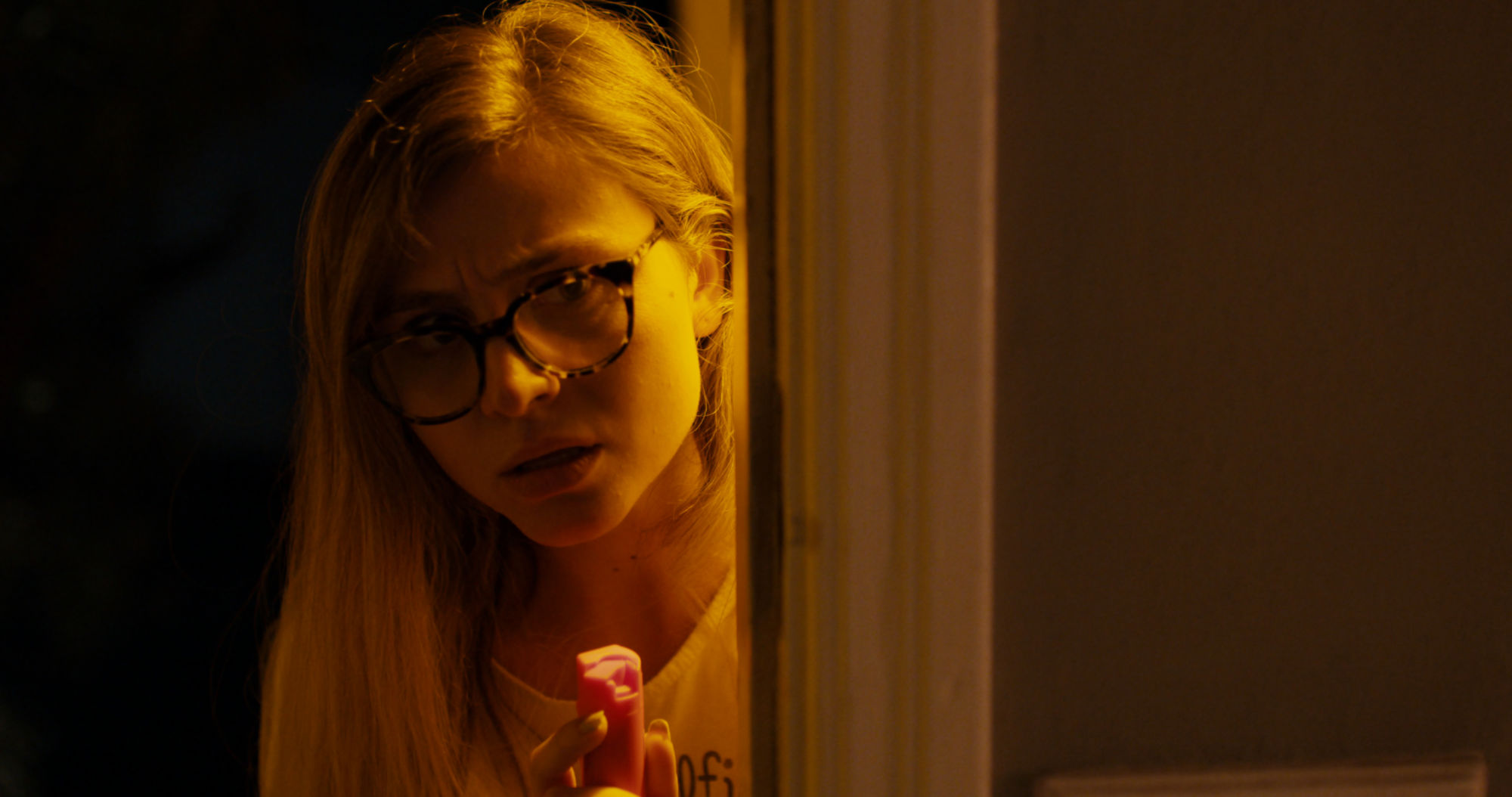 It’s hard to extract yourself from the rubble of a long term relationship with your dignity intact (especially in the age of social media.) We figured that as long as we compassionately (but honestly) showed how our main character was feeling, his misdeeds wouldn’t be too horrifying in a way that made you disconnect from the film. It felt easier navigating the different tones by keeping it grounded in a person’s behavior and not any preconceived notions of a genre.

Corey Sherman manages to be banal yet threatening, what sort of direction did you provide to get this role right?

Most of our conversations were about providing context for his character’s relationship and finding a way to relate the emotional beats of the story to things we’d experienced in our own lives. It helps that we are very good friends and have worked together over the years on a number of different projects, so we know one another’s tastes well by this point. However, most of the credit goes to Corey, who’s a skilled actor/writer/director and knew how to tonally align himself with the story. I don’t remember saying much to him during the actual filming besides a few technical adjustments here and there. Both he and Grace Korkunis were not afraid and threw themselves into creating the reality of this movie. If anything, I wanted to make sure that the set was a fun place where the actors could explore a lot of different possibilities and not feel judged.

The two storylines interlace together seamlessly, how did you manage that?

This film required detailed preparation to make sure we’d get the material we needed and in terms of connecting our two storylines in a way that wasn’t super confusing. Our DP Pearce Healey and I typically work off a detailed shot list and then tweak it on the day after a blocking rehearsal. We’ve worked together on several films over the years and are pretty in tune with each other by this point, so we leaned heavily on our previous experience in making sure we achieved our setups.

Throughout this, I was definitely wondering whether or not it was going to work at all (more than I usually would be.) So much of it was based around people having an emotional reaction to something they’re seeing on a computer – not necessarily the most cinematic material – so it really wasn’t until we started getting feedback on the edit that we were sure the movie even made sense.

It felt easier navigating the different tones by keeping it grounded in a person’s behavior and not any preconceived notions of a genre.

We shot for three consecutive nights using a Panasonic VariCam LT Digital Cinema Camera and using a set of Cine FF High Speed Primes. We then did a half day of pickups later for some of our flashback material. Our cast and crew were really wonderful and it was a blast to film – definitely one of the best experiences I’ve ever had shooting something. I’m especially proud of our two leads, Grace Korkunis and Corey Sherman, for throwing themselves into the film in a way that really grounded the story.

Post production took a bit longer, roughly four months in total because it was in-between our day jobs as editors. There was a lot of screen capture material that we needed to build into the movie, in addition to nailing down exactly how long these sequences would unfold on-screen. However, like production, it was a very rewarding experience. Seeing what our editor, composer, and sound designer delivered throughout the process was inspiring, and their work really helped determine the tonal balance of the movie.

You spoke of your concerns about the audience making sense of the film, how did the feedback you received reshape the One to One in the edit?

Our Editor Erik Vogt-Nilsen did a lot of key work early on, in terms of establishing a pace that matched the energy of the story but honored the rhythm of what we captured on set. Erik has very good instincts about timing, so I mostly followed his lead in terms of when to let things play out, and when to move along.

I’m in pre-production on a feature film. It’s a supernatural thriller about a relationship. It’s tonally similar to One to One, but more of a ghost story and will be a lot scarier!

One to One is one of the many great projects shared with the Directors Notes Programmers through our submissions process. If you’d like to join them submit your film