Running 25th to 28th May at the BFI Southbank this year’s NFTS Graduating Showcase is more impressive than usual, not because the work is of a higher standard (the shorts on display by this year’s cohort easily matches the impressive standards set by England’s leading film school) but because of the means in which it was made. Over the course of the last year we have all bore witness to how film studios have safely resumed many of their major productions and the rigorous health and safety planning that has gone with. This is why it makes it even more impressive to see student-level productions achieve that same very feat. Finishing a degree is hard work, let alone during a pandemic. The work on display from the NFTS is, as per, exceptional. An amazing blend of animation, documentary, comedic and fictional work which explores a variety of themes all somewhat relating to the present moment. DN is here to offer you a recommended selection of the films featured in this year’s event, hopefully guiding you towards a few special gems amongst the impressive selection from some of the UK’s next emerging filmmakers.

Set in 1605 against the backdrop of the witch trials, Emma J. Gilbertson’s Requiem is a romantic gothic drama about Evelyn and Mary, whose hidden love is being encroached upon by the local parish. It’s a slow-burning mood piece with outstanding set design. Gilbertson creates tension through setting her film during this prejudiced and rule-stricken time of history, giving you the feeling that around every corner there is someone ready to chastise Evelyn and Mary for their actions. It’s all topped off by a wonderful performance from Games of Thrones’ Bella Ramsey who is able to channel Evelyn’s repressed longing through subtle gestures. 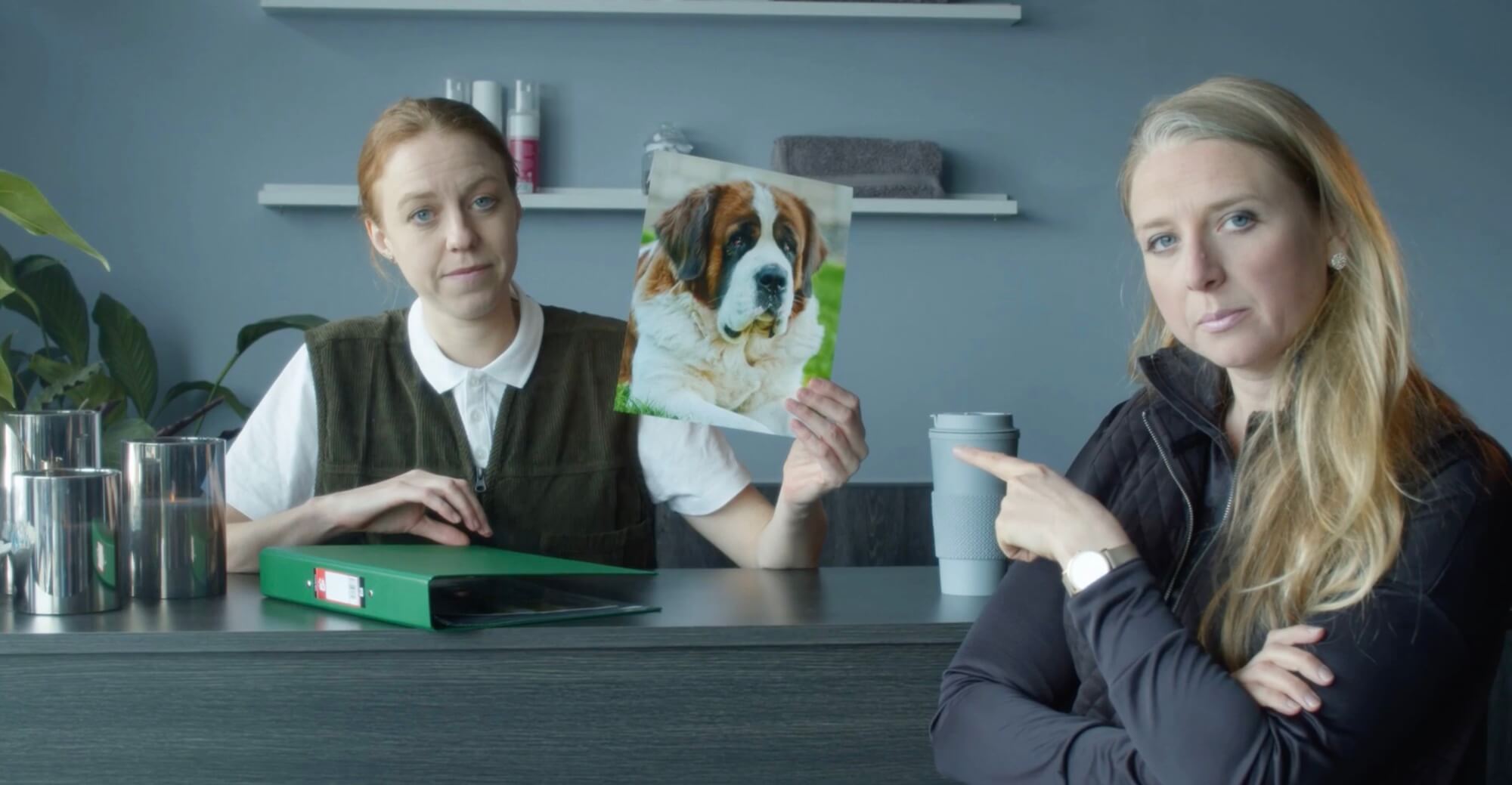 Dog Haus is short comedy by Jo Wiggins about Verity and her desire to expand her dog grooming business through the help of self-aggrandising guru Tamara. Verity and Tamara are respectively played by Ellie White and Tessa Coates who both deliver hilarious performances which Wiggins captures through a mockumentary style of filmmaking. Despite its seven minute runtime, Wiggins manages to pack her short with gags aplenty, exposing the true dynamic between the pair and the short leash keeping them so close together.

Build Me Up – Steve Lawson

It’s Wall:E meets Star Wars in Steve Lawson’s practically-created animation short Build Me Up. Lawson’s tale follows two robots in the aftermath of the loss of their creator. The pair venture forth, battling an incoming ice age whilst also processing their grief. It’s a beautiful and heartwarming story accompanied by an epic score from Moritz Wanger who echoes the triumphant orchestral pieces of John Williams. An impressive showcase of the ambition the NFTS clearly encourages their students to strive for.

You can’t ignore your problems forever. A Film About A Pudding is an absurdist animated film which isn’t really about pudding. Director Roel Van Beek’s short film follows Ronin who after dropping his groceries in the street, chooses to ignore his mess and head to the office. When he looks back to the space in which he dropped everything earlier, a pudding has since formed and it begins growing rapidly in size. Van Beek blends minimalistic hand-drawn animation with camera-shot footage to tell Ronin’s story and brilliantly visualises the sensation of being overwhelmed all whilst making you laugh.

How To Be A Happy Loser – Nancy Roberts

Nancy Roberts created her documentary during lockdown. What was a period of reflection for many allowed Roberts to think back to her time in Japan where she spent a large portion of her adult life. Her documentary How To Be A Happy Loser sees the filmmaker reconnect with her past and the freedom that time in her life afforded her. It’s an insightful look into Japan’s lesser known eccentricities whilst also being a journey into self-discovery.

During one restless evening where Ruby can’t sleep, she begins to be haunted by past versions of herself. Ida Melum’s Night of the Living Dread is about confronting your past regrets and previous embarrassments head on. What starts out as your typical late-night horror quickly evolves into a Lynchian nightmare. It’s a wonderful, and oddly uplifting, animated film with a terrific central voice performance from Jessica Dennis.
Read our Night of the Living Dread interview with Ida Melum here.

Caterpillar (Sâu Bướm) is a realist drama about a young Vietnamese boy enslaved by a criminal organisation. As he spends his time caring for a cannabis farm for his superiors he also longs for the youthful life he’s missing out on, gazing out into the streets outside where other children are playing freely. It’s a dark look at a world behind closed doors, and a portrait of the pain and suffering some go through just to get by. It’s certainly one of the more serious affairs on offer at the showcase but director Marcus Anthony Thomas treats his subject matter with dignity and care.

Grey Area is an investigation into the act of badger culling. Kate Wallace utilises the documentary format to weigh up conversations surrounding culling from all sides including farmers, politicians and scientists. Wallace is objective in her approach, importantly remaining neutral as she highlights the universal desire to sort out the spread of bovine tuberculosis with a hopeful solution that supports both farmers and wildlife. It’s a really well-researched work on a fascinating subject and a must-watch for animal lovers.

Do Not Feed The Pigeons – Antonin Niclass

A personal favourite. Antonin Niclass’ animation Do Not Feed The Pigeons is slyly comedic slice-of-life that follows the array of characters waiting one night at a bus station. Created through a really unique practically-created textured animation style, Niclass starts out by channelling the mundanity of Roy Andersson before he rips through the staleness with a sense of euphoric freedom. A short film that words can’t do justice. Certainly one to keep on your radar.
Read our Do Not Feed The Pigeons interview with Antonin Niclass here.

To close out our recommendations from the NFTS’ Graduate Showcase this year we’re shining a spotlight on Other Half, Lina Kalcheva’s surreal animation of a world comprised entirely of merged couples. Kalcheva injects each of the vast array of characters that populate her world with tonnes of personality whilst balancing an interesting exploration into what it means to truly merge with someone without fully absorbing them. It’s a colourful and truly abstract look at relationship dynamics through the always-charming claymation lens.

You can find more unmissable films, like the ones featured in the NFTS Graduate Showcase 2021, in our Best of Fest collections.