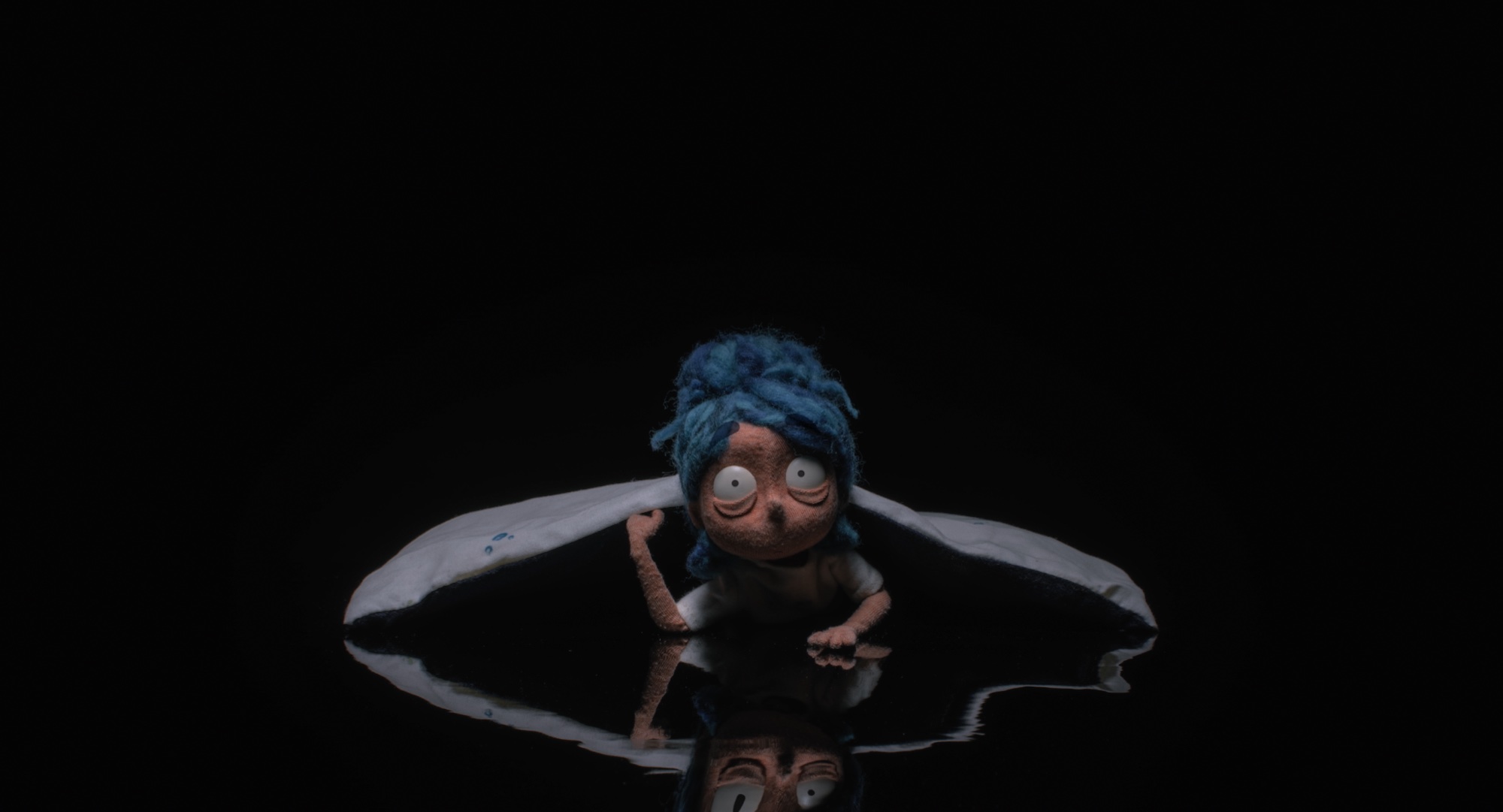 Ida Melum’s stop motion animation Night of the Living Dread is a short DN first caught as part of the NFTS graduate showcase in 2021. The film, which was made as part of the animation programme at England’s leading film school, was amongst a plethora of shorts from the school which stood out to us in our Best of Fest highlight article from the showcase. Melum’s short was particularly notable thanks to its blend of tactile materiality and mature themes of everyday regret. The plot is centred around a young woman struggling to get to sleep who becomes confronted by versions of herself from moments of regret in her life. It’s a powerful short with universal themes and it’s no surprise to us to see that it has gone on to be nominated for the BAFTAs this year. In anticipation for the awards ceremony, DN caught up with Melum to discuss the genesis of Night of the Living Dread, what it was like working with Stephen Fry on its narration, and the singular joy of creating stop motion animation.

Night of the Living Dread has such a wonderful concept as it confronts something we’ve all experienced, what made you want to make it?

I love making films about everyday life and having fun with it. I was always fascinated about how I could have a normal day, or go to a party and enjoy myself, but as soon as my head hit the pillow, my mind would race and replay every little awkward encounter I had. I never imagined the film would resonate with such a broad audience. It’s so lovely that people recognise themselves in the film. Hopefully it’s a little reminder to us all that we are all awkward and embarrassing at times, and not to take ourselves too seriously.

It was written by Hannah Kelso and Laura Tunbridge, how did you collaborate with them on how the film would play out?

When we started working together, I presented them with the initial building blocks of the story. Together we had many brainstorming sessions, which they took onboard and elevated everything by creating a structure, adding more comedy, a lovely visual ending to the film and lots more. They worked so hard and gave their everything to the story. During production we kept tweaking bits here and there, which led to many revisions, but we all wanted it to be the best it could be.

Stop motion has a notoriously lengthy production process, how long did it take to make Night of the Living Dread?

It is, luckily it is a lot of fun! Nothing beats seeing your characters come to life. The actual shoot took six to seven months, but with the development that came before and the post-production that came after the shoot, it took about a year and a half to finish.

Hopefully it’s a little reminder to us all that we are all awkward and embarrassing at times, and not to take ourselves too seriously.

What attracts you to working in stop motion animation as opposed to other forms of animating?

I think it’s the physicality and the fact that I can move the puppets with my own hands. That makes sense to me. I would struggle a lot more if I had to animate a character in 2D. Stop motion also brings with it a world of textures, which is really fun to explore. Also, who doesn’t like tiny things? Seeing a set fully decorated with tiny props will never not be exciting.

Colour plays such a key role in establishing each scene, how did you approach the colouring for each memory?

The Production Designer Milly White was the one that came up with the idea of giving each memory a distinct colour. It was such a great way of not only guiding the audience between the fast-paced transitions. She also chose the colours so that Ruby and all the different versions of her would pop out in the scene so that the audience would know who to focus on. Milly and the DoP Charlie Jenkins worked really closely together to choose the right colours so that they would feel cohesive. I learned a lot from working with them, they are both absolute pros.

Do you have a favourite scene or favourite memory that you enjoyed seeing brought to life?

I definitely have a special spot for all Drunk Ruby scenes. And also Teen Ruby, there’s just something really funny about your awkward prepubescent self that always makes me giggle. But I think the bathroom sequence overall is my favourite part in the film. It’s the point in the film where the tempo really slows down, and Ruby gets to have a heartfelt moment with her youngest self which then gets interrupted by the rest of the Ruby’s, which always makes me laugh.

I have to ask about working with Stephen Fry! How was that experience?

I still can’t believe he said yes! What an absolute legend! Danielle Goff, our producer, was the one who made this happen. Due to the pandemic and his busy schedule, we actually never got to meet him in person. He sent us the recordings, which was still a surreal moment when you hear Stephen Fry reading something you and the writers have worked on for months. It wasn’t until we put the recording into the sound mix that it started to sink in. If I do meet him in person one day, I might just have to give him a hug you know, whether he wants one or not.

Who doesn’t like tiny things? Seeing a set fully decorated with tiny props will never not be exciting.

And lastly, is there anything you can tease us with about what you’ll be up to next?

More films! I am currently developing a slate of shorts that I am really excited about, and hopefully I’ll be shooting one of them soon.