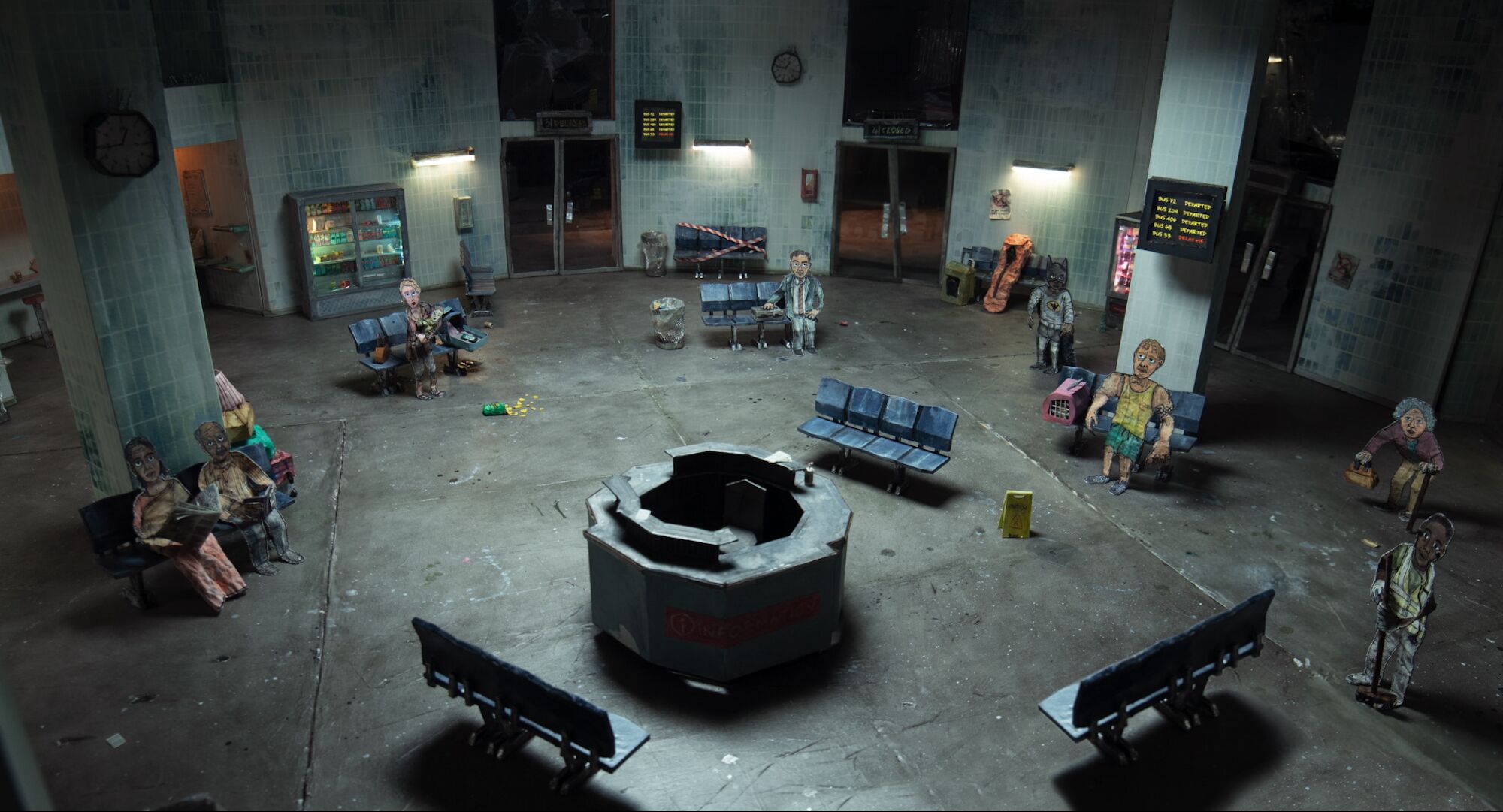 Antonin Niclass’ BAFTA-nominated short film Do Not Feed The Pigeons is a remarkable animation about a group of melancholic strangers in a bus station who experience a collective moment of natural magic. It smoothly blends two dimensional hand drawn characters into a fully-crafted stop motion set capturing both the the wistful sensibility fostered by its inhabitants and tactile detail of their dilapidated environment. What’s impressive is that Niclass created this short in as a nascent animator. He created the film as part of his study at the National Film and Television School where he harboured his skill as artist, a challenging feat given that he could barely draw when he began his education there – at least to a level of his satisfaction! DN caught up with Niclass ahead of the BAFTAs to chat stop motion, his unique characters models, and the beauty found in the melancholy of the everyday.

Where did the concept for Do Not Feed The Pigeons come from?

I have always been drawn towards portraying feelings of loneliness and melancholy. These are usually the people I see first and that move me the most. I would witness these emotions in many forms whenever I was travelling late at night from one city to another. That’s how the first ideas came about. I like the oxymoron of shared loneliness: people that have nothing in common and don’t seem eager to communicate yet happen to share the same bubble for a few hours. They are forced to live together and maybe find common ground before going back to their separate lives. Once we found where we wanted the film to take place, we worked with Screenwriter Vladimir Krasilnikov to give it a tangible shape.

I found it very exciting and challenging to bring these techniques together: mixing the volumes of a stop-motion set with the flatness of drawn characters.

From the start, we wanted a parallel with the animal world. We liked the idea of going from small to big and how these comparisons could help us change the perspective of ourselves. While visiting a coach station, we got amused by these “Do Not Feed The Pigeons” signs everywhere. These pigeons, usually considered disgusting flying rats, may in fact be the ones who could teach us something here. We wanted to portray the pigeons as the lords of this microcosm.

I love the look of your character models, how did you come up with their design?

Thank you! Being originally a stop frame animator, I discovered 2D animation during my curriculum at the National Film and Television School and enjoyed drawing a lot, even though I didn’t have much experience with it. We had life drawing classes that I would never miss, and I was also forced to draw because we were constantly making new animatics during production. I found it very exciting and challenging to bring these techniques together: mixing the volumes of a stop-motion set with the flatness of drawn characters. I experimented a lot, trying to find the right material and texture to do so. At some point, there was this idea of using material that could be found in the station to draw the characters on top… Bus tickets, food wrapping, etc. We moved on from that idea but the flatness stayed. The challenge was then to define how 2D puppets would move and behave in a 3D space and the constant need to find solutions kept the creativity going until the end. 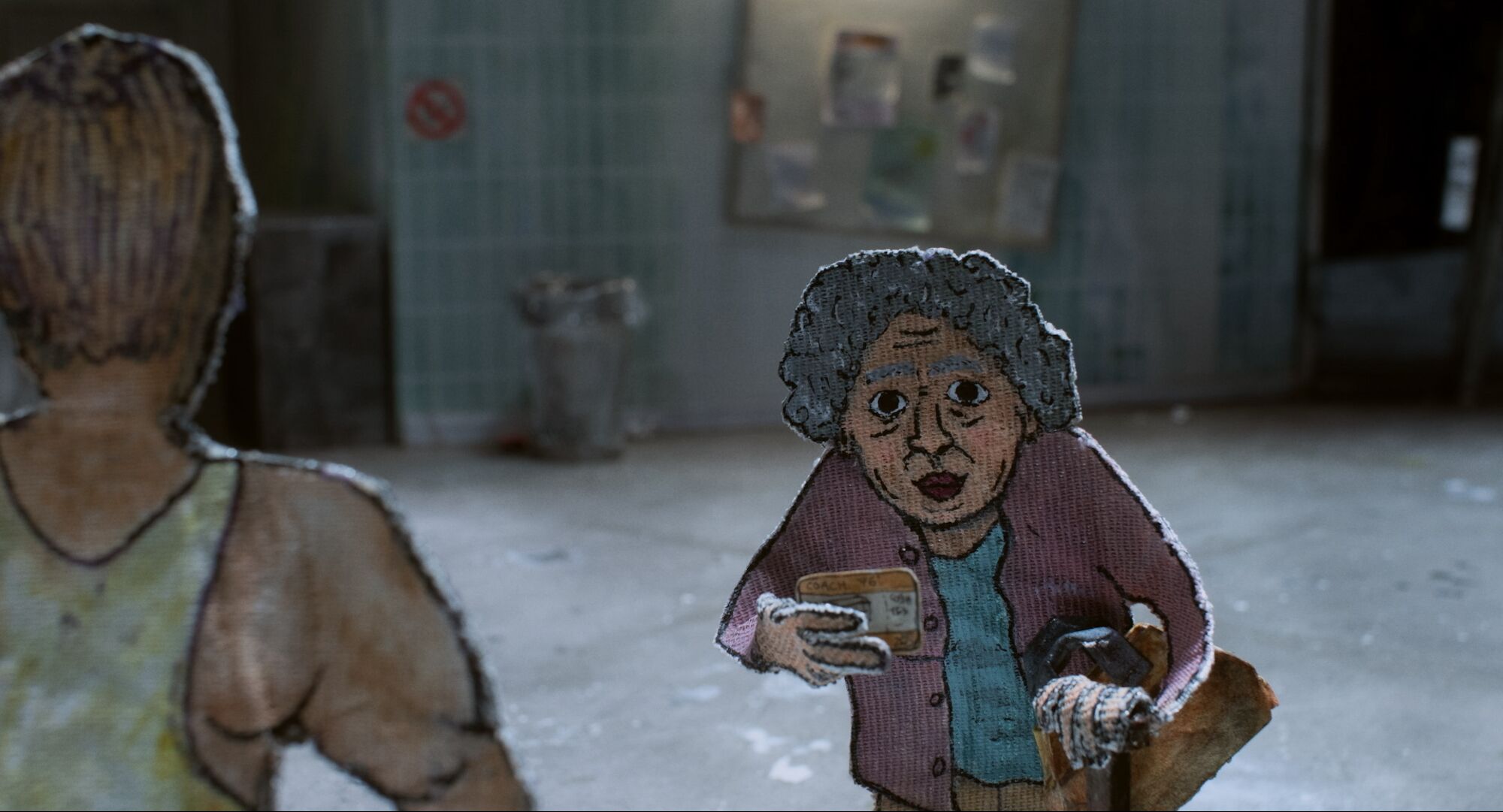 How did you approach the coach station? Did it take a long time to construct it as a set?

Having lived in different cities in the past years, the coach station was a place I experienced many times. I felt it was full of potential to depict the loneliness of travellers waiting for a coach that may never arrive. With Vladimir, we decided to stay very late at night in Victoria Coach Station. Not to travel but only to observe travellers. We were knee deep into this melancholy, but could also feel that a beauty was hidden beneath the dirty sad walls of the station. We took pictures and videos and sounds of everything and shared our journey with Eve Finnie, the Production Designer, who came up with an incredible set design. It took her almost two months to build the final set and to make the props, but we started shooting before it was finished, as she cleverly divided the set into several parts that could be brought back together ultimately for the wider shots. A lot of it is made from recycled material such as old newspaper or Chinese takeout…

Could you walk us through how you animated the pigeons as a collective in flight?

I struggled to find the best way to animate the group of pigeons together. We originally made a sheet of paper where all the pigeons were drawn together and moving as one element, but I wasn’t happy with it as it looked very static and we couldn’t make them flap their wings. We ended up animating lots of different flight cycles of separate pigeons that the DFX department managed to comp together in a beautiful way. Although, we still used that static pigeons sheet once for a shot that needed to be live action. I was filming the flight from the point of view of a pigeon, dancing around with a GoPro inside the set, while a hanged taped drill was making the pigeon sheet spin. It only worked for this shot because the camera was always in motion. Each shot needed its own tricks and techniques…

It’s a very mood/atmosphere-driven piece, how did you collaborate with Composer Fabio Amurri to evoke that with the music?

Fabio embraced the melancholy of the script very early on in the process and we started discussing jazz references, the duo Sly Johnson and Erik Truffaz for example, as there was a street musician in the script at the beginning. But then we got rid of this bit and our focus shifted towards Debussy or Nils Petter Molvær for the calm loneliness that evokes the night for me. It was difficult at first to find where the melody would go exactly as I wanted the film to be an observational piece almost like a documentary, without music. But I also knew I wanted the soundtrack to take over at some point and the film to become more narrative, connecting all the travellers in the station together.

The possibilities are endless and everything you create already has a taste to it: even the most mundane object can induce a strong visual style and bring a lot to the mood just by the way it is crafted.

Fabio created a theme that he would put at the beginning, only to call it back at the end. We wanted a contrast between the sadness of the place and the harmonious moment of the climax, where all the characters, and pigeons, would play a part. We wanted, at least in a subtle way, to make all the sounds be part of the music palette, from the light buzz to the puddle, the vending machine, the crying baby and the pigeons flapping. Joe De-Vine, our sound designer, and Fabio started hiding chords and SFX with musical qualities everywhere in the film. At some point, this sound idea was even dictating the script as we were writing characters that would complete our musical palette with their repetitive actions.

What draws you to stop-motion animation as a form?

Because I can’t draw! Jokes aside, if you compare it with live action, I like the fact that you can make everything from scratch. The possibilities are endless and everything you create already has a taste to it: even the most mundane object can induce a strong visual style and bring a lot to the mood just by the way it is crafted. I also personally enjoy the tactility and sensations of materials because I get quite anxious when I spend the whole day on a computer. It feels quite surreal to really be on set with our miniature actors, with the same surroundings. You really impersonate a character when you start animating and you will often see animators in their studio doing weird faces or movement while moving a puppet…

Bit of a broad question, what did you learn during your time at the NFTS and how do you feel your education there has impacted your approach to animation?

I was thrilled to see that the curriculum’s main focus was storytelling, rather than practicalities or technical skills because in the end it all comes down to the story. It’s not revolutionary but I was recently on a jury for a festival and there were so many films that looked incredible, but felt a bit bland or didn’t have either clever storytelling or an interesting significance. Robert Bradbrook has been an incredibly passionate tutor and he showed us the importance of empathy and characters in stories. I didn’t have a strong animation background when I started at the NFTS and I learned a great lot from other animators. During the first year, you’re eight people sharing the same room and being constantly surrounded by animators experienced in various techniques makes you really eager to learn it all. I was probably the least skilled animator then but I was quite excited to have more to learn than the others!

Can we expect more animated stories from you in the future?

We just finished the adaptation of our short animation in virtual reality and we’re really excited about it. It took quite a while to find our way around this new medium but I liked that the flatness of the characters could still take place in a virtual 3D set. We repurposed the characters for the VR version and we found how to drive the viewer’s eyes into the narrative without our traditional editing tool. I wanted the story to be flowing and without ‘cuts’ so we had to find a way to bring the focus from one character to the next using space, sounds, light and… pigeons of course! I learned a lot from it and was excited to work again with the same team from school but on a more professional level this time. Now it’s time to go back to writing again!