Directors Notes alum Joel Jay Blacker (last seen on DN here) returns to our pages today to discuss his latest collaboration with Keenan The First, Dinner and a Movie. It’s the second video the pair have worked on together, the first of which being impressive VFX relationship loop How It Goes which we featured back in 2018, and marks not only a continuation in their collaborative work but also a poignant reflection of the contemporary Black experience. It’s a really clever video which, as we see his date plans go awry, balances Keenan’s unaware joy with a depressing reminder of the pervasive nature of racial inequity. DN caught up with Blacker to chat about his return to working with Keenan and the wild, freeform approach he took to bring his time pressed video to life.

How was it returning to work with Keenan? What brought you two together again?

Dinner and a Movie is the second music video Keenan and I have done together. After How It Goes, we were looking for ways to work together again. He’s such a natural talent with so much charisma, but he also puts in a ton of work to push himself as an artist, and that’s intoxicating to be around as a director. We wanted to push ourselves to do something bigger than the last video and that’s hard when money’s tight. We shot the video before Covid in 2019. Around that time, before they were called Karens, videos of white women calling the cops on Black people were going viral.

What was it about Keenan’s song lyrically this time around that connected to those viral moments of racism?

Keenan and I spent a lot of time talking about the videos he wanted to make that showcase the Black experience. Dinner and a Movie was a lyrical challenge Keenan set himself. Inspired by Mick Jenkins’ Ps & Qs, Keenan wanted to see if he could write a song with only foods and movie titles from Black cinema as the lyrics. It’s a goofy, upbeat song that’s contagious but I cried listening to it one day in the car, which was unexpected. I couldn’t get the idea out of my head: Here’s my friend writing songs about foods and movies, just to have a laugh, in a country that fails to protect him and his right to have fun. I called him while driving home and pitched him the whole video idea. He loved every bit of it.

This feels like a video with a lot of moving parts, how challenging was it to wrangle all the different elements you needed?

We shot the video on the roof of the apartment complex’s garage where I lived, un-permitted. We shot the TV elements, Keenan as different movie characters, on a green screen in the garage below the same day. We had actors in cop costumes out on the main road… which is very illegal. We had them cover themselves in blankets between takes while we were shooting the mob sequence just so they didn’t draw eyes. It was one full day of shooting. It was too ambitious, to be honest, and I was amazed we even got enough pieces to create the story we did.

Keenan and I spent a lot of time talking about the videos he wanted to make that showcase the Black experience.

Wow! I didn’t expect the video to be so freeform considering how slick it is. How much of it improvised then and there?

None of the cast really knew what we’d have them do and we were on such a time crunch, I’d sort of just throw them scenarios, give them one direction, and let them play. Simone Mariposa had said she hadn’t acted before that day, but she was incredible. Her scene with Keenan in the intro is entirely improvised. We’d just throw lines at her and she’d own them. I think she off-hand said “Fuck Shaft” and I about died, I thought that was so funny. So I had her repeat that getting bigger in delivery each time. Clayton Farris (News Reporter), came up with all that dialogue on the spot. I gave him a few things I wanted him to riff off, but he came up with “Fucker Carlson” which I think is the best thing to come from this video. 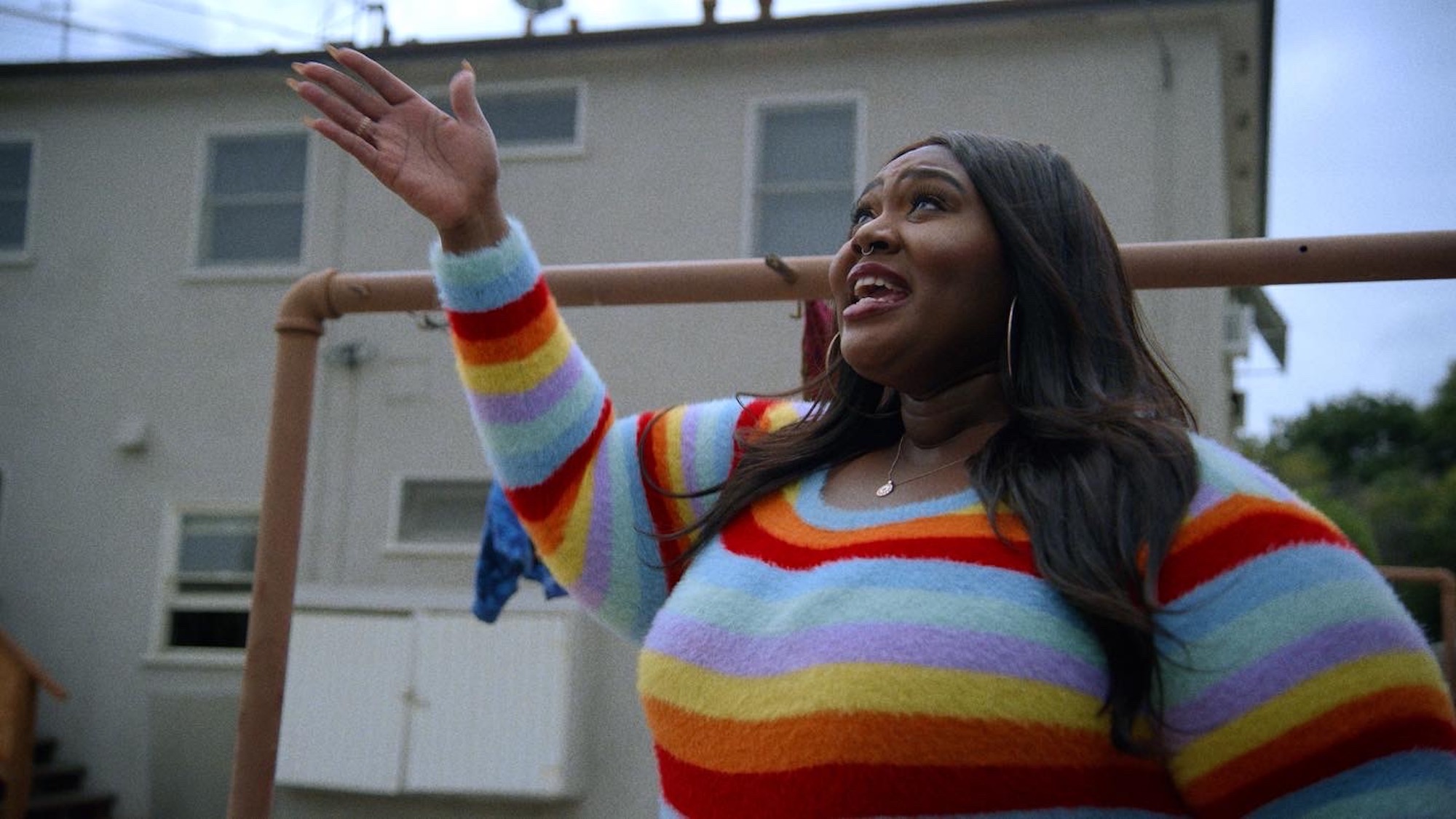 Given that you were… bending the rules around permission, what did you plan in preproduction? Did you storyboard at all or was it mostly getting things in place on the day and working it out?

It was a bit of both. The main story beats we photographed before the day, but there were a lot of unknowns. I expected it to be a difficult shoot just with the amount that could go wrong. We only had a small window of time for most everything we shot, so I spent less time shot listing and more time creating a meticulous schedule. We only felt comfortable shooting things like actors impersonating cops or having a drone in the air for so long, so it was a lot of getting those elements in place and playing to see what we’d get. Luckily I know a lot of individuals who are brilliant improvisers.

I love the vibrancy the whole video has, it’s an aesthetic that totally pops off the screen.

I’d like to highlight Catalina Elgarrista, our costume designer, who sourced all those outfits with barely any money. To match all the movies in the video was ridiculous in hindsight, but she did it. She’s my hero. And our DP Tanner Hall. I made him lug a full RED package around with a fat Fujinon 18-85mm zoom lens on his shoulder, handheld all day in the middle of summer. The crew as a whole I’m so indebted to. It was a really tough shoot that wouldn’t have been possible without them.

What have you taken away from making a video that was so loose in its formation?

I’m so grateful we shot the video when we did. It was so scrappy pulling it together. Given the pandemic and how difficult it is to shoot without a budget now, I’m going to cherish it. I hope the video highlights just how talented Keenan The First is and encourages others to follow him. Thank you to all that watch.

It was too ambitious, to be honest, and I was amazed we even got enough pieces to create the story we did.

What do you enjoy about creating music videos? And what do you think they teach you that you can take into other parts of your filmmaking?

Aside from the obvious: Not being beholden to a commercial client with no taste. The joy of working with Keenan is having another artist who is just as excited about the concept. I think of music videos like short films. I can’t be bothered to make a music video without a narrative. I love a music video that’s made to be just aesthetic (those vibey videos), I’m just not that director. I’m not interested unless it’s wrapped in a story I’m wanting to tell. I enjoy looking for avenues to incorporate surreal and strange elements, and with music videos that just comes more naturally.

With Dinner and a Movie, leaning on the lyrics themselves to speak to the story in a more literal sense was fun. Like Keenan in Space Jam shooting a bundt cake is just more interesting than another interpretation. It’s already bizarre.

Speaking of, do you have any more music videos, shorts or projects on the horizon?

I’m writing a feature adapted from a short. It’s a comedy horror about white guilt. I can’t share more about the concept than that publicly at the moment, unfortunately, but I’m excited about it. Any interested parties, please hit me up. I’m hoping to shoot the short as a proof of concept.