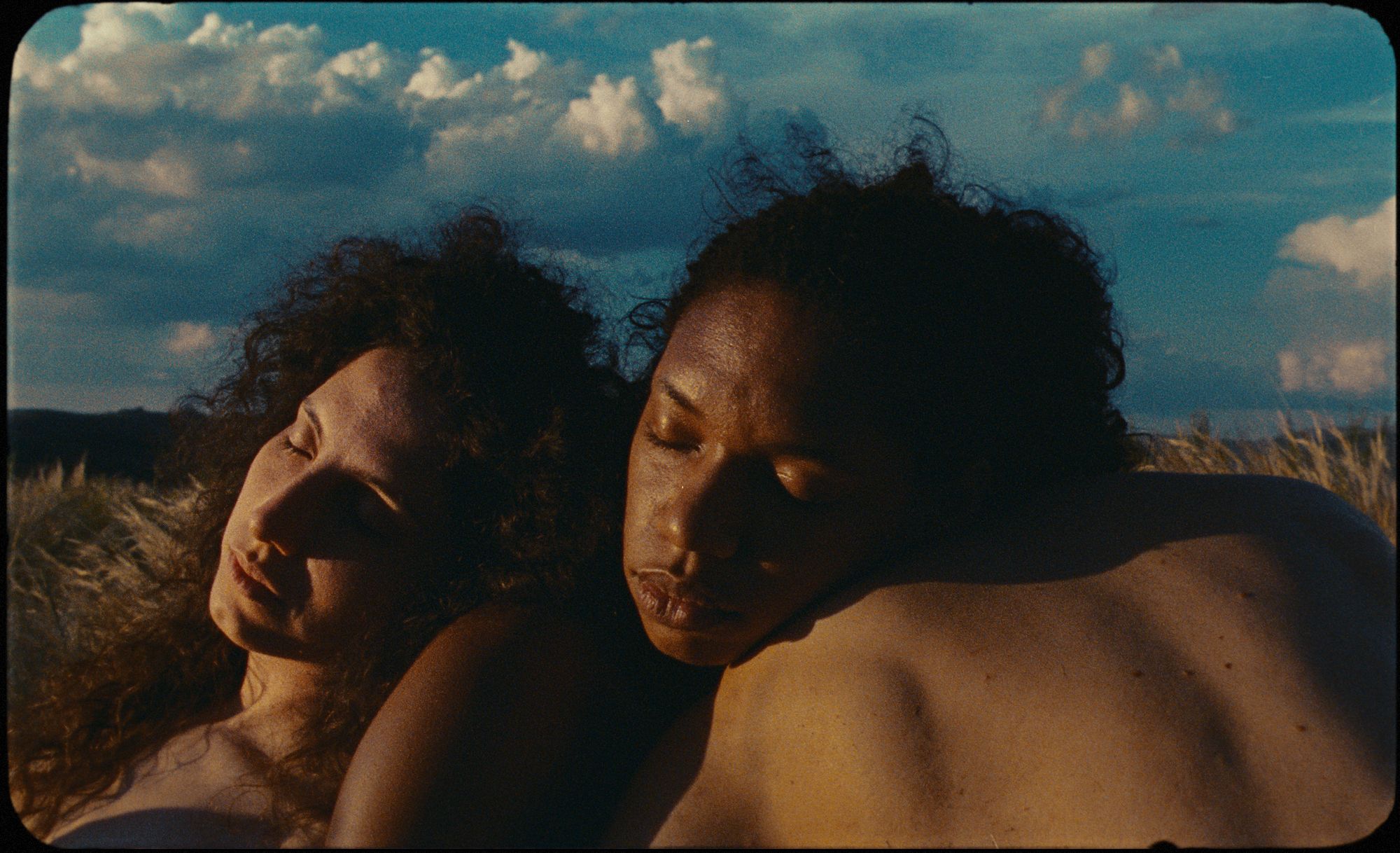 When Brazilian directing duo Vira-Lata (Giordano Maestrelli & Duran Sodré), decided to develop upon their earlier music video Defectively (featured on DN here) they approached São Paulo band Terno Rei whose tones and melodies perfectly reflected their way of thinking and working, resulting in ephemeral piece Medo. Halfway between heaven and hell, a purgatory of sorts, a highly sensorial and synesthetic piece of work, created on the borders of reality and concerned more about raising questions than on answering them. It isn’t a story, but an atmosphere, a dystopia, a non-place that tries to provide a stage for thoughts about liberty, anguish, anxiety and coexistence. We asked Vira-Lata to delve into the deeper desires behind the making of this project, the heady influence their homeland played in the setting and the sheer joy (and frustrations) that came alongside their decision to shoot on expired film.

How did you come to create this essay in the form of a music video?

Just like any other writer/director, there are themes that we are most drawn to. Since Defectively we were drawn to the idea of creating a highly sensorial piece of work, not worrying that much with a perfect narrative arc. We wanted to take a step forward as authors and create a more robust and authentic storytelling background, not a classic narrative with Act 1, 2, Climax and so on. After endless listening sessions to the album, we knew that Medo was the perfect song to plunge into. Until now, almost two years after first listening to it, every time we hit the play button we are taken to a place that we aren’t exactly sure of. Both sky and earth, free and detained, exuberant and melancholic. This dichotomy of feelings hooked us and gave us room to write a narrative, an essay that tries to understand this mix of feelings by examining its opposites – by talking about heaven and hell, interesting reflections about purgatory are born.

Since the beginning we knew this needed to be a project, made with love and surrounded by dear people. It needed to be a delicate, intense and, at the same time, therapeutic process. Our production company, The Youth, embraced this project with the care it needed and gave us all of the resources so we could enjoy the ride and let the music-video dictate its own rhythm. In October of 2020, pre-production began and we spent around a month in a room pitching ideas around. Writing notes on colored post-its and sticking them to the wall – filling the room with scene ideas, feelings, shots and, above all, doubts. After four or five weeks of unscrambling the narrative in our heads and even more colored post-its covering the walls, we realized that to move forward and defog our views, we needed to understand where all of those actions would take place. It was time to scout for locations, we hopped in our old and beaten minivan and drove around Paraná in Brazil in search of the ideal locations.

During those endless car rides in the countryside with our DP Yuri Maranhão we always talked about shooting on film. Not only due to the obvious visual aspects of it but because we knew it would lead to a different approach to filmmaking. Within our previous experience shooting on 35mm film we were stunned by how the crew, cast and gear were in perfect tune. We wanted every shot to be carefully sculpted and constructed; to have a meaning and a story behind it, and we knew that only film would give us this option. 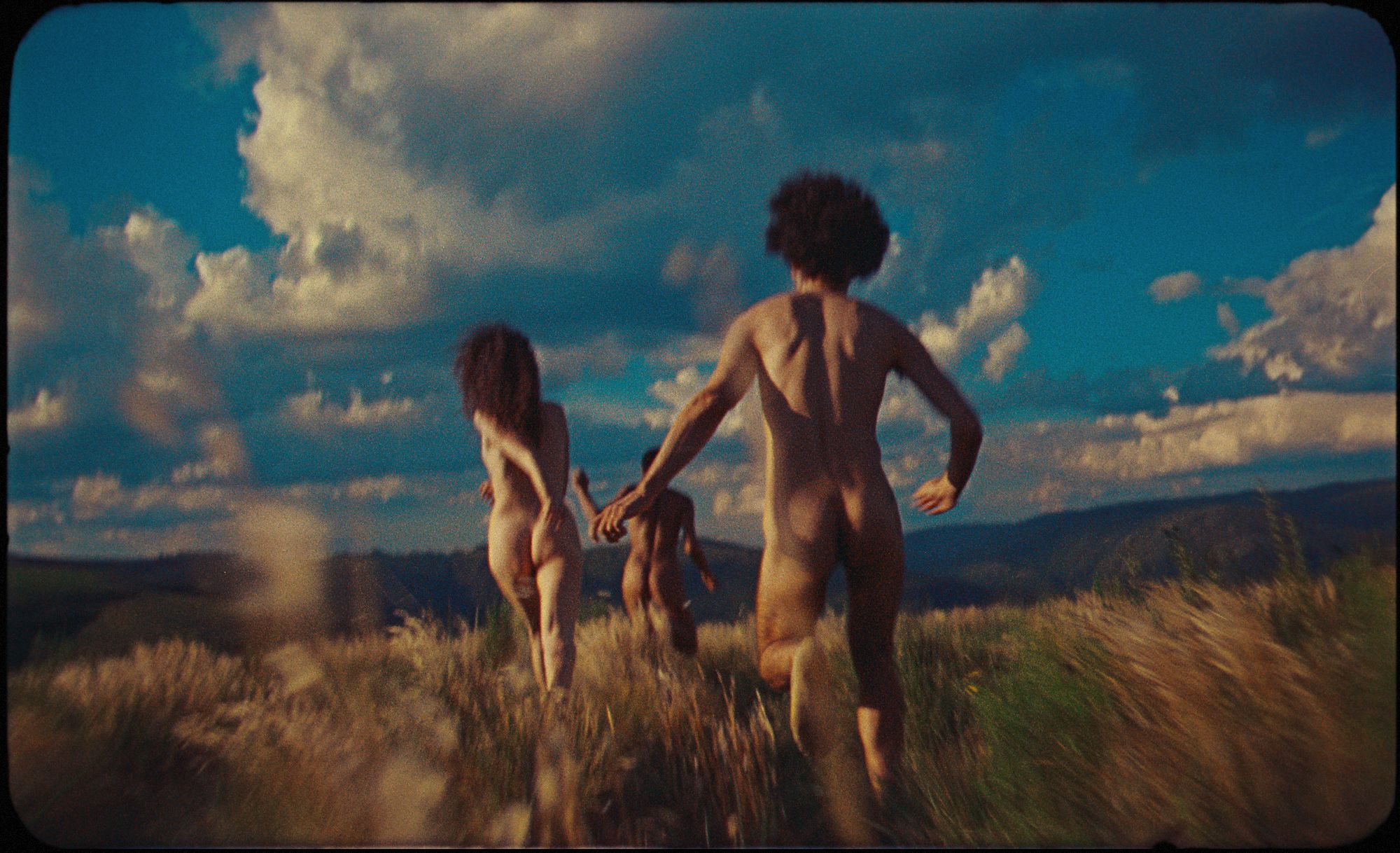 We wanted a heavy and deep look for the internals and something a little bit smoother for the externals in an effort to create a highly contrasted look between these two universes. After considering working with mixed formats (like 16mm and 35mm, or 16mm and digital), we ended up sticking with 16mm due to its melancholic look and using a 500 ASA for the internals and 50 ASA for the externals. The whole music video was made using expired stock, which is really hard to work with but has an authenticity that we find quite amusing and intriguing – this idea of portraying a place that is stuck in time gains even more strength when working with “imperfect” stock.

Can you tell us more about the production, especially in relation to the 16mm expired stock?

We always visualized this music video with a dirty and grainy look, with the internals grainier and the externals cleaner. As mentioned we’ve worked with 35mm previously and wanted to try something different. Shooting film in Brazil is quite hard since there are no working labs or official stock sellers. Fortunately, Yuri (our beloved friend and DP) had a fridge loaded with tons and tons of the most diverse 16mm expired stock, so this project sounded like the perfect opportunity to burn it. We knew that shooting with expired stock was a huge risk – things could be grainier or look way different than we’d planned, but that’s just something we needed to be prepared to deal with.

This idea of portraying a place that is stuck in time gains even more strength when working with ‘imperfect’ stock.

We shot a couple of tests and developed it in a DIY way just to be sure that the stock wasn’t too degraded or fogged. Nothing seemed outrageously wrong, so we went for it. When we received the first batch of scans, we were shocked by how grainy and flickery the footage was, so we started studying noise-reduction and restoration possibilities for a few shots. The look before correction was quite gripping to be honest, it had a kind of “found footage” aspect that gave the whole thing an interesting meaning. However, we couldn’t have any flicker on shots where 3D objects would be inserted or 2D compositions would be done, as that would make all of the VFX work way harder. Diogo Gameiro, our amazing VFX supervisor, came up with some really interesting solutions for restoring the footage, but all of them needed to be carefully tested – a very time-consuming process.

We spent almost three weeks trying different plugins and methods for denoising, deflickering and defogging the footage until we were happy with it. We were then able to fully control how much grain and flicker we wanted on each shot, which was quite good to build a more unified aesthetic. The shots we tempered the most were the internal ones, which ended up with a specific kind of dirtiness that brings a lot of authenticity and rawness to the cinematography. To shoot film is to deal with an organic and alive process (even more when working with 10+ years expired stock), so to learn how to embrace mishaps like that is quite crucial.

Did your final choice of location affect the piece and if so how?

At first our main concern was regarding the location for the internals. It needed to be a very specific site, as we imagined a place that was kind of frozen in time. Our location manager told us about an old disused hospital just out of Curitiba that sounded interesting. The moment we stepped into that building, it was like a huge cloud moved away from us and the sun shone again, we knew that was the place. It had the perfect layer of retrofuturism we were searching for, tons of options of rooms and spaces to play around with, a lack of windows and an interesting color palette – we don’t know exactly how, but something just clicked and everything fitted flawlessly. It’s funny that a lot of odd and weird scenes/situations we imagined previously seemed to be there, just waiting to be discovered by us. We were ready to build a fake brick wall to close a hallway or to plant some fake plants on cracks on the wall – so we were stunned when we found all of those things already there.

The nature locations, which we thought would be the easiest ones to find, ended up being the hardest. Our goal was to paint a portrait of an almost untouched and wild nature that would match with the liberty and raw tone we wanted to create which turned out to be quite hard, even in a country like Brazil. We dove into the nature scouts with our minds open and wanting to be surprised by the wild, not worrying too much if things veered away from our initial plans. Eventually, after some long days of scouting by ourselves, a lot of mileage covered and good laughs along the way, we were able to find everything we were searching for. 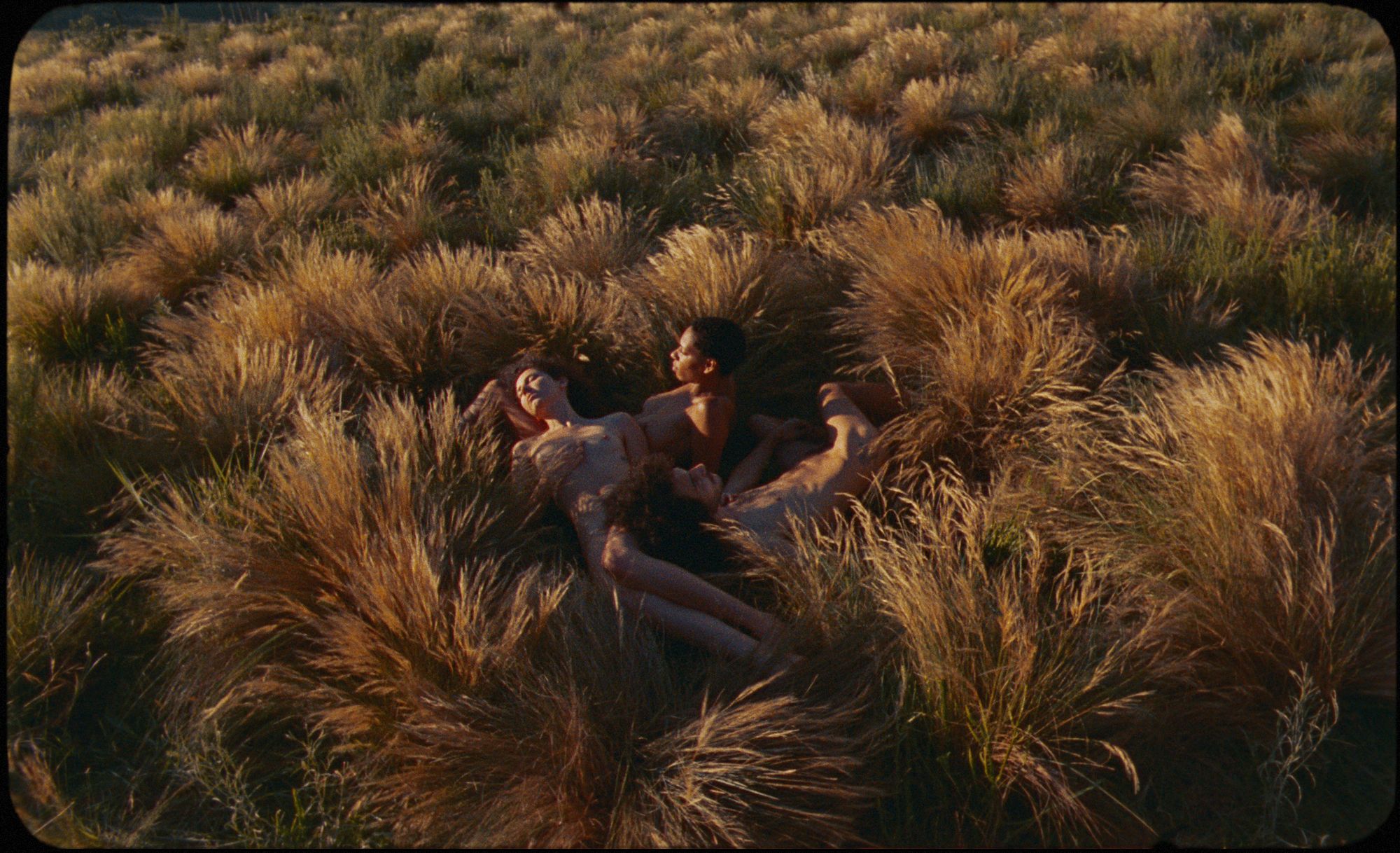 How did your casting process work?

We like to work with street casting and real people, but for this project we searched for talent that came from the other arts like dance, drama or performance arts. We were very interested in understanding how the body manifests certain feelings and sensations; to translate emotions and establish tensions and conflicts through subtle body expressions or movements, not worrying too much about facial expressions or lines of dialogue. In the internal scenes we wanted the body to be presented as fragile, tense, cornered; with characters being distant from each other. On the other hand, with the externals, we wanted the complete opposite. Their bodies to be full of life, free and unrestrained.

We were very interested in understanding how the body manifests certain feelings and sensations.

Our biggest concern was to cast people that would dive head first into the project. We didn’t want to just give the talent directions and tell them how to feel, we wanted them to fully be part of that universe. After a couple of interviews we picked Matheus Henrique, Ailén Scandurra and Laremi Paixão as the final cast. They all clicked with the project and with us right away in a very natural manner, and we got quite excited by the fact that each one of them comes from a different artistic background: Ailén is a musician and performance artist; Laremi is a dancer studying African heritage dances and Matheus is an actor/performer. They ended up blending perfectly to create this authentic group and achieve the kind of acting/body expression we were searching for. 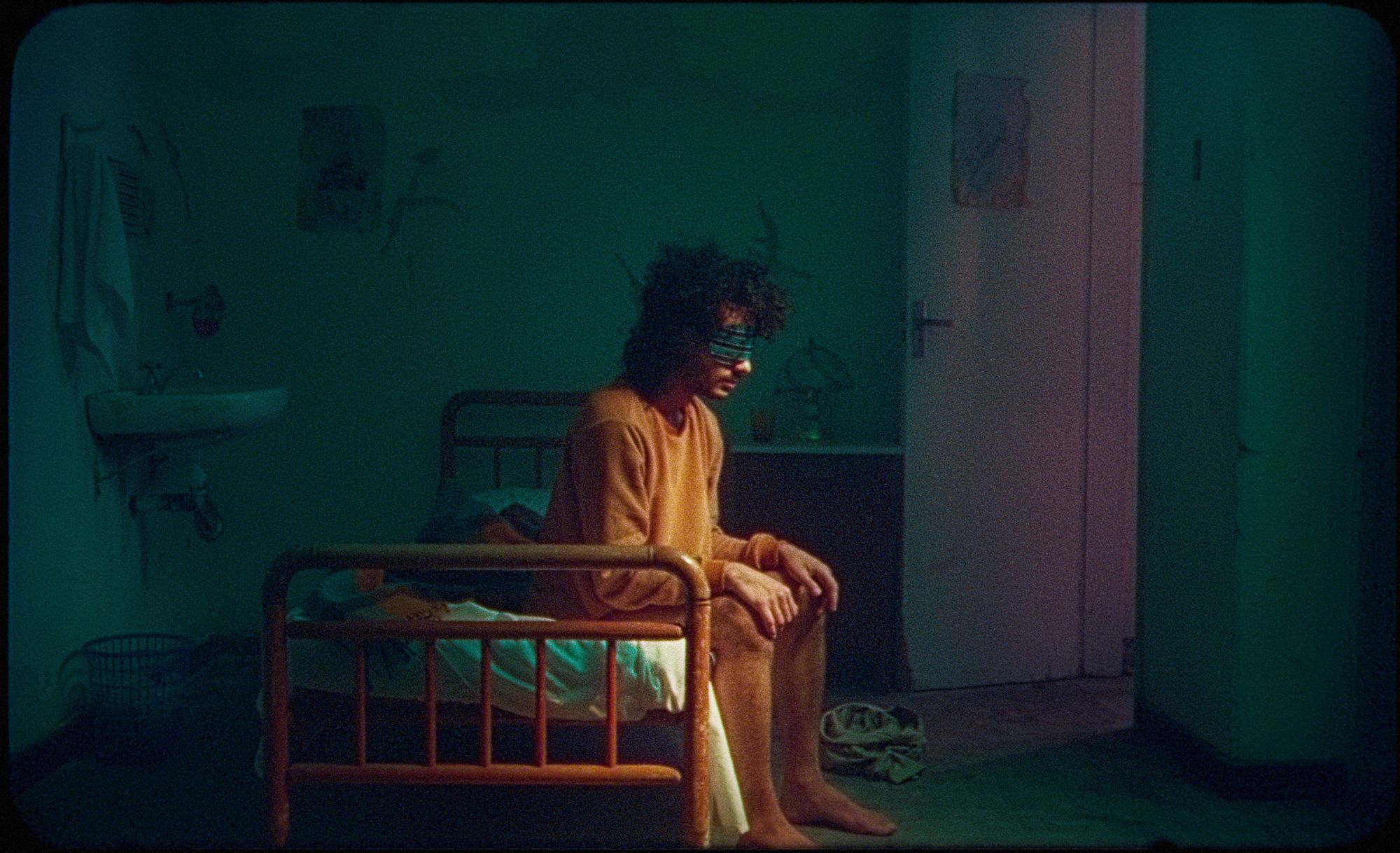 Right now we are in-between commercial shots, but already thinking about our next passion project, hopefully to be shot at the end of the year. We want to take another baby step forward and explore something a little bit more narrative and story-driven; probably a piece written entirely by ourselves.