Sporting pastel clothes and adopting carefully coordinated movements, the coalescing bodies of Alice Fassi’s Vogue-Maserati (produced by C41) have the ability to project unity and individuality at the same time, providing a fascinating correlative to the film’s ambition to represent the unique, contrasting personalities of both fashion magazine Vogue Italia and car manufacturer Maserati. Shooting on film at the hyper-modern Maserati factory and featuring an otherworldly musical score, the short feels analog while containing a futuristic ambition, taking us on a trippy adventure through the factory in just under two minutes. Fassi joins us in order to talk about creating a dreamlike journey, adapting choreography to the challenging location, contrasting the soft clothes of the crew with the harsh greys of the factory, shooting entirely on 16mm film, and how finding the music is often half the battle of creating a movie.

What input did the two brands have into the film? Did they give you any creative brief?

The collaboration between Vogue and Maserati was intended to show the Maserati factory in a fashion-oriented tone, proposing something different from what people are used to seeing associated with the “automotive industry”. Vogue came with the idea of transforming the Maserati factory into a stage for a dance choreography while Maserati had the first anniversary of the MC20 coming. I started from these two inputs to create my idea.

How did you want to approach the project?

The idea was to depict a dreamlike journey through the Maserati factory. I envisioned an itinerant dance that accompanied the viewer in the different areas of the factory, also portraying the process of the construction of an MC20 car. I wanted the dancers to simulate the movement of the working machines and the assembling parts of the car in a very organic and fluid way. I love opposites and in this case, I wanted to bring a certain delicacy into a world associated with manhood. 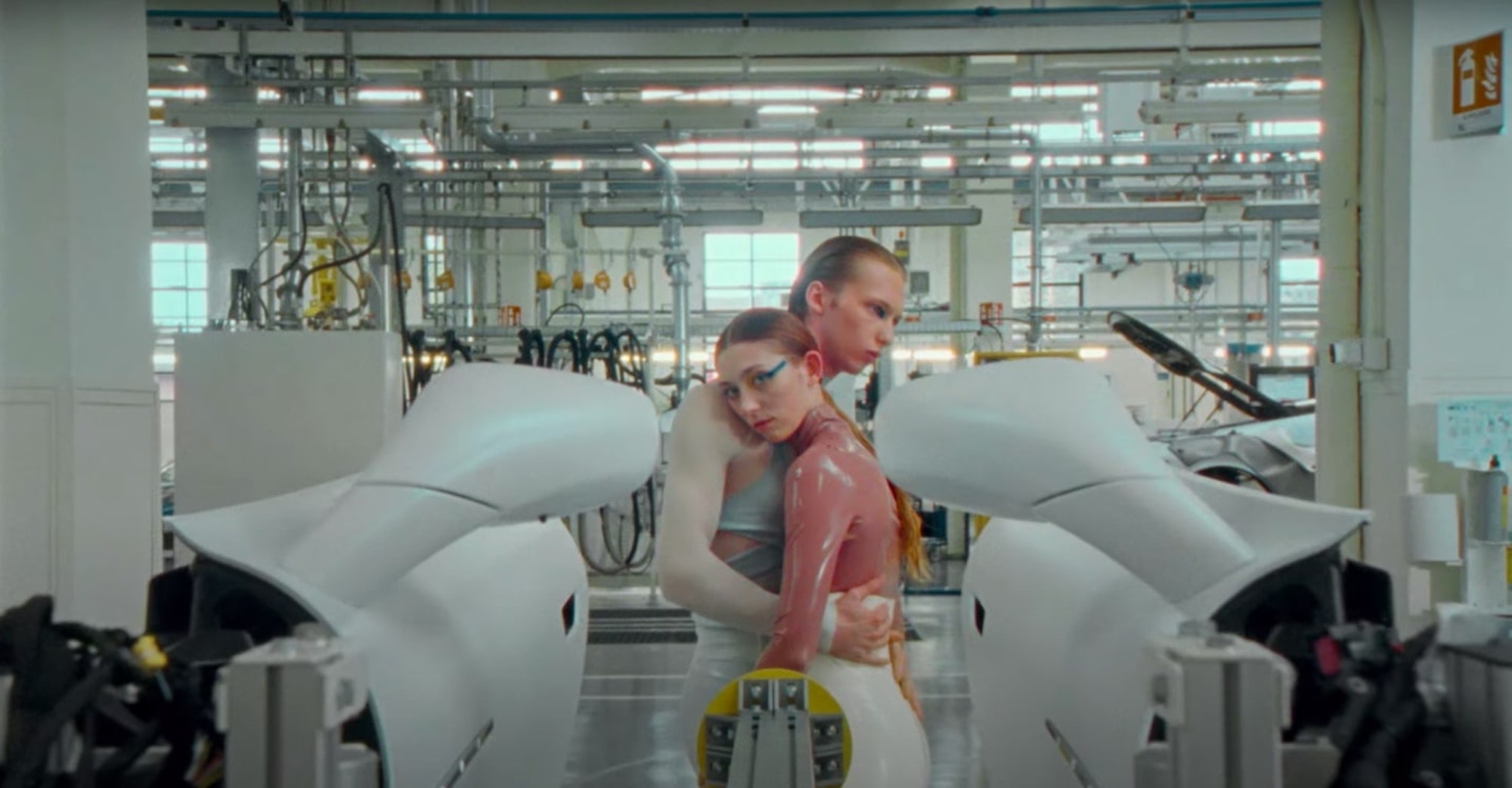 Did you get a chance to explore the factory a fair bit beforehand to think about how the film could work?

We had some location scouting with the team before the shooting date. The factory was huge and there were some colours that recurred in all three main areas. That inspired the colour palette of the film as I wanted to match the colours of the location/cars with the colours of the styling. Also, seeing the working machines in function surely gave me some ideas on how I wanted the choreography to be like.

I love opposites and in this case, I wanted to bring a certain delicacy into a world associated with manhood.

I’d love to learn more about the dance style of Collettivo Trasversale and how they worked on creating their movements with the choreographer Macia Del Prete?

With the choreographer Macia Del Prete we opted for a dance which alternates moments of dynamism and stillness while always maintaining a dreamlike mood. We had three days of rehearsals with the dancers from Collettivo Trasversale and Macia understood my vision from the very beginning. Then there was the hard part, adapting the choreography to the location, where the walkable floor was tighter and full of obstacles. The dancers made this look way easier than you could imagine.

The grading really shows off the colours in the film, namely the contrast between pinks and greys, i.e. Vogue and Maserati. What type of camera did you use and how did you work on the look of the film?

From a visual point of view, I opted for a pastel colour palette in order to create a contrast with the grey surroundings and I decided to shoot entirely in 16mm film with an Arriflex camera. The factory was full of LED lights that gave us a very beautiful diffuse lighting. Given that, I worked on-set with DP Andrea Dutto so that we mostly used the diegetic lighting that was part of the location and off-set with colourist Daniel Pallucca in order to not push too much on the contrasts but rather maintain a natural look.

What was it like working on film itself? Did you want to have an analog feel to reflect the car?

I didn’t want to fall into the futuristic/dystopian cliché and shooting in analog surely helped. A hyper-digitalised image associated to the automotive industry would have given to the final output a very ‘advertisement’ kind of feel.

I like how the dancers seem to form together to create one unit while also managing to have their own personalities. How did the choreography work to create this tension between the individual and the collective?

I had this image in my head of the dancers’ bodies bonded together like raw material ready to be transformed. This is the first shot I had in my mind. I wanted the choreography to convey this contrast between the individual body and the whole. That’s why the dancers keep on joining and separating like hybrid components, each one with their own identity. There is a constant crescendo until at the end they become a single moving human composition.

I didn’t want to fall into the futuristic/dystopian cliché and shooting in analog surely helped.

The editing is particularly accomplished, matching the movements very well. How did you work on this?

I supervised the editor Stefano Balossi during the post-production. At the beginning he didn’t know the choreography so I helped him to reconstruct the order of the shots. By the end he had watched the material so many times that he could have also danced it. After re-ordaining the material, we started with the funny part, inserting the transitions that were planned as a breakdown. I wanted to alternate some ‘slow breathing’ moments to faster cut inserts to create a sort of balance. 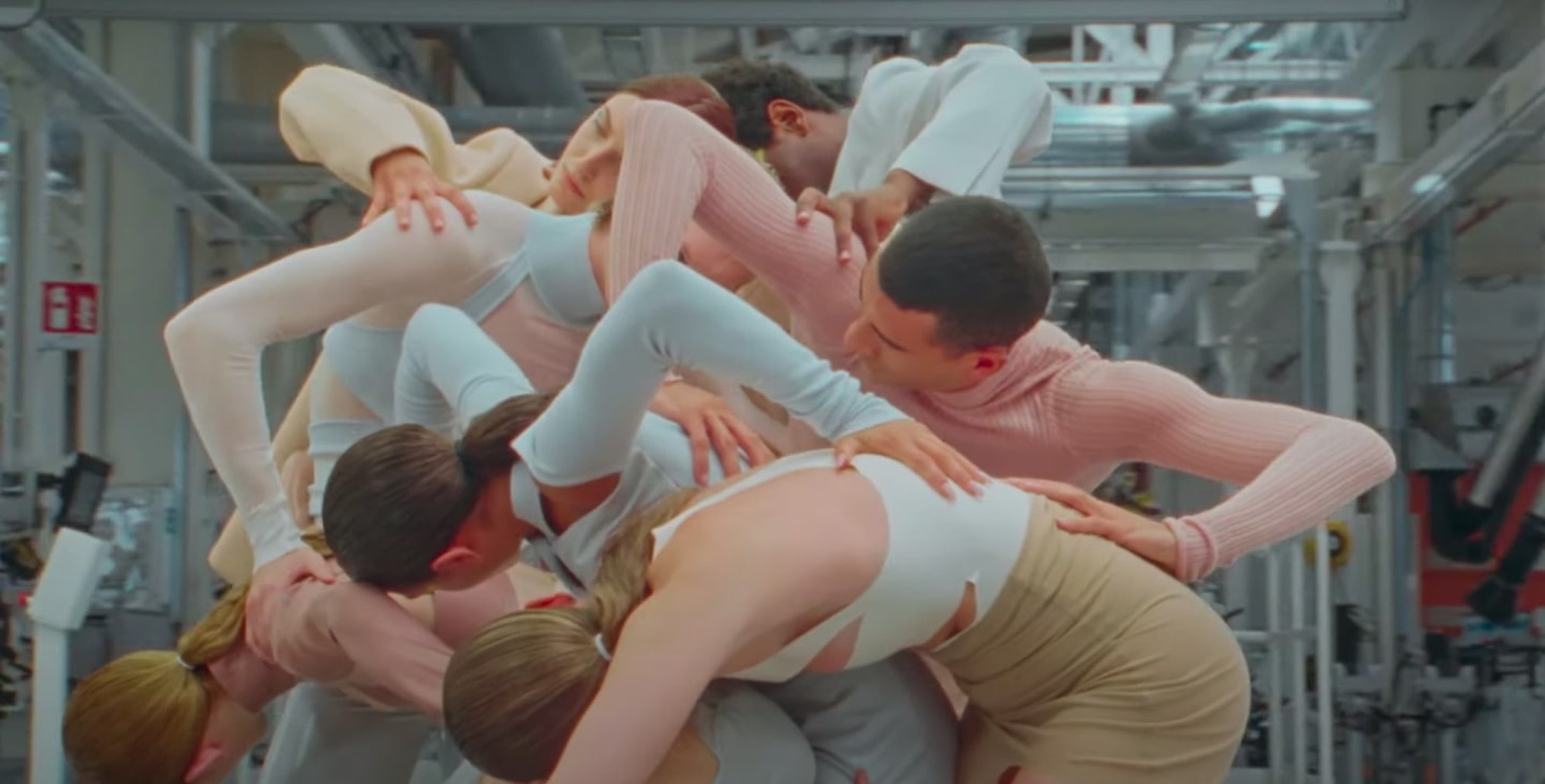 I loved the music, which helps to create this otherworldly, futuristic vibe. What was your collaboration with the composer like?

Guido Smider composed the music of the film. I gave him some reference music by Py Corner Audio and he got the mood perfectly. In the beginning the music should have been mixed with a sound design referring to the sounds of the moving car. Hopefully we didn’t follow that path, I think it would have spoiled the magic. It was my first collaboration with Guido and usually it’s not so easy to find someone who understands your vision so quickly. Music makes 50% of a film, so I’m very happy with how it went.

It’s still a little secret. I guess I’m a bit superstitious. It’s something I shot this August entirely in Super 8mm film. I can tell you it’s very far from the fashion world and from what I did in my past and it was a wonderful experience. Hopefully you will see this soon.