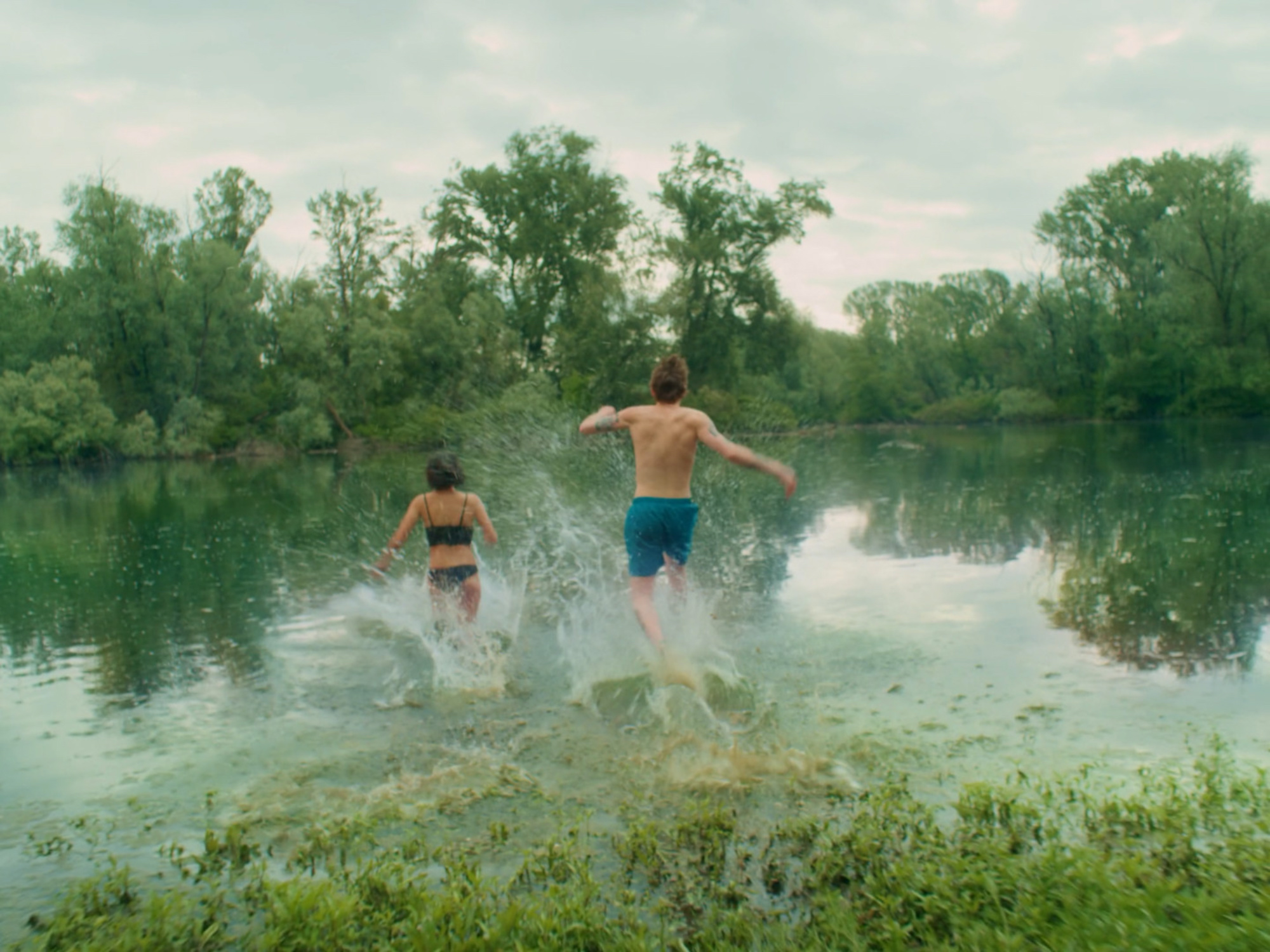 After ten years of being part of the directing duo SÄMEN, where he developed his name through creating stylish advertising content and compelling music video work, Sami Schinaia has made his debut short film in the form of Nope!, a trippy portrait of modern relationships and underlying addictions. Schinaia seamlessly carries over the stylish direction he exuded with SÄMEN, creating a story where powerful psychedelics and online dating collide. That’s not to say this is a gritty realist portrayal of failure in the face of these contemporary issues. Instead, it’s a light and fluorescent representation, honestly evoking the connection that can be found in these problematic parts of society. DN is proud to share Nope! with our audience today and joined Schinaia in conversation to deconstruct the potent visual flourishes of his first creative venture as a solo director.

I read that Nope! began as quite a personal film for yourself. What was the impetus for it as a project?

This short was born from the need to talk about the most recent period of my life, but above all to do it in an extremely personal way. Making a short film has always been a way for me to share experiences and emotions with others, as I’ve never been very good with words. As part of SÄMEN, which was ten years spread across music and advertising connected by my love for narrative work, I co-directed two short films. The last one, Rumori, had Matilda De Angelis and Andrea Arcangeli as its protagonists – two young, but already established, Italian actors who were experiencing the difficulties of the end of a relationship. Nope! is my first solo project. It represents my life in the last two years, but also the life of many other young people.

What concepts did you want to explore within Nope!’s trippy narrative?

The underlying themes are the addictions to the modern world: internet and drugs which, in my opinion, tend to limit the importance of human relationships. That’s why I wanted to dive into this topic, already touched upon in my previous works. I wanted to bring a bit of lightness to this theme by developing the story through an ironic and funny angle. The drug is therefore represented by psychedelics and mushrooms, while the internet by Tinder.

The underlying themes are the addictions to the modern world: internet and drugs which, in my opinion, tend to limit the importance of human relationships.

I wanted to tell how, from my point of view, human relationships often end up last in relation to the superficiality with which they are experienced. When you can easily match a person, as soon as you come across the first problem in your relationship you don’t even try to figure out how to solve it. Instead you quit, run away, disappear and move on to the next relationship. That’s the same with drugs. They are more accessible, fast, quick, you have access to different sensations from those you are experiencing. Everything becomes instant, effortless, unproblematic and without the need to compromise.

And how did you seek to present these themes as a film for an audience to connect with?

The dialogue of the two protagonists who find themselves in an intimate moment for the first time briefly presents this concept. The visual aspect is the other predominant element of the short. The imagery of the short represents the new generation, fluorescent and digital, but at the same time unclear, clouded by substances and by the virtual world of the web.

The film has such a striking visual language along with a great soundtrack. You must’ve had a brilliant team of collaborators to work with on this.

On Nope! we worked specifically with a very young pool of talent who have taken care of every single detail both creatively as well as technically. The photography of Gianluca Oliva, the art direction of Claudia Decaro, the post production of Matteo Bico and Leonardo Distefano, the original soundtrack, a fundamental element of this story, created by Temuri, stage name ZMA, of Georgian origins, with the bars on the end credits of Andrea Copes, a very young rapper from the Corvetto area of Milan. The graphic approach and the illustrations are by Maria Chiara Moro, a very young Venetian designer with a fresh and innovative taste. Styling was curated by Julia Beo, who collaborated with brands such as Nike and IUTER. The Milan-based production company Basement HQ once again gave me the trust and support for this project not only by providing me with part of the equipment technical but also by coordinating the production – they are always ready to support young artists and new projects. On July 2nd we also organized a small screening in the Milanese park Lambro, just a small get-together with friends and those who worked on the film, with music played by us and crazy visual effects from the guys in post. More than 100 people came, it was great.

How did you look to visually represent the characters’ trip on screen?

I wanted to give hidden clues to separate reality from the trip. In this instance I focused on the visuals, after Fabian, the main character, eats the mushroom, we start to notice deformities around the characters. As the trip progresses, colours, for example the water of the lake, start to become fluorescent and their faces take on an almost rainbow light at the height of the trip.

The imagery of the short represents the new generation, fluorescent and digital, but at the same time unclear, clouded by substances and by the virtual world of the web.

What drew you to tackle issues surrounding modern addiction in a more light and playful way?

I wanted to move away from the heaviness of these themes especially because these addictions are not experienced in such a negative way by younger people. On the contrary, it generally takes some time to realise how the way they experience relationships isn’t exactly healthy. Nope! isn’t meant to be any sort of accusation on how we experience these dependencies, it’s more of a judgment-free point of view as an outsider. I simply portrayed the legitimate lightness with which the protagonists experience life.

What filmmaking experiences from working with SÄMEN did you bring to creating your first short as a solo director?

It has always come naturally to me to share the complications of human relationships. It’s a topic very close to my heart and it’s not by chance that it was always the main theme in the work created as SÄMEN. With Nope! I bring all my experience from working as a duo, starting from visual and surreal works – elements that we have refined through our music videos and advertising productions – to our acting work, which tends to always be undermined especially in Italian cinema.

Will you be making any more shorts as a solo director soon?

I hope so, because it has been really cool. Self-centred in some ways too, but definitely positive. I don’t want to force anything. For me, directing short films has always been born from a need to tell my own personal stories. If I don’t feel like sharing something I particularly care about, I simply won’t direct short films. Instead I will focus on commissioned works.