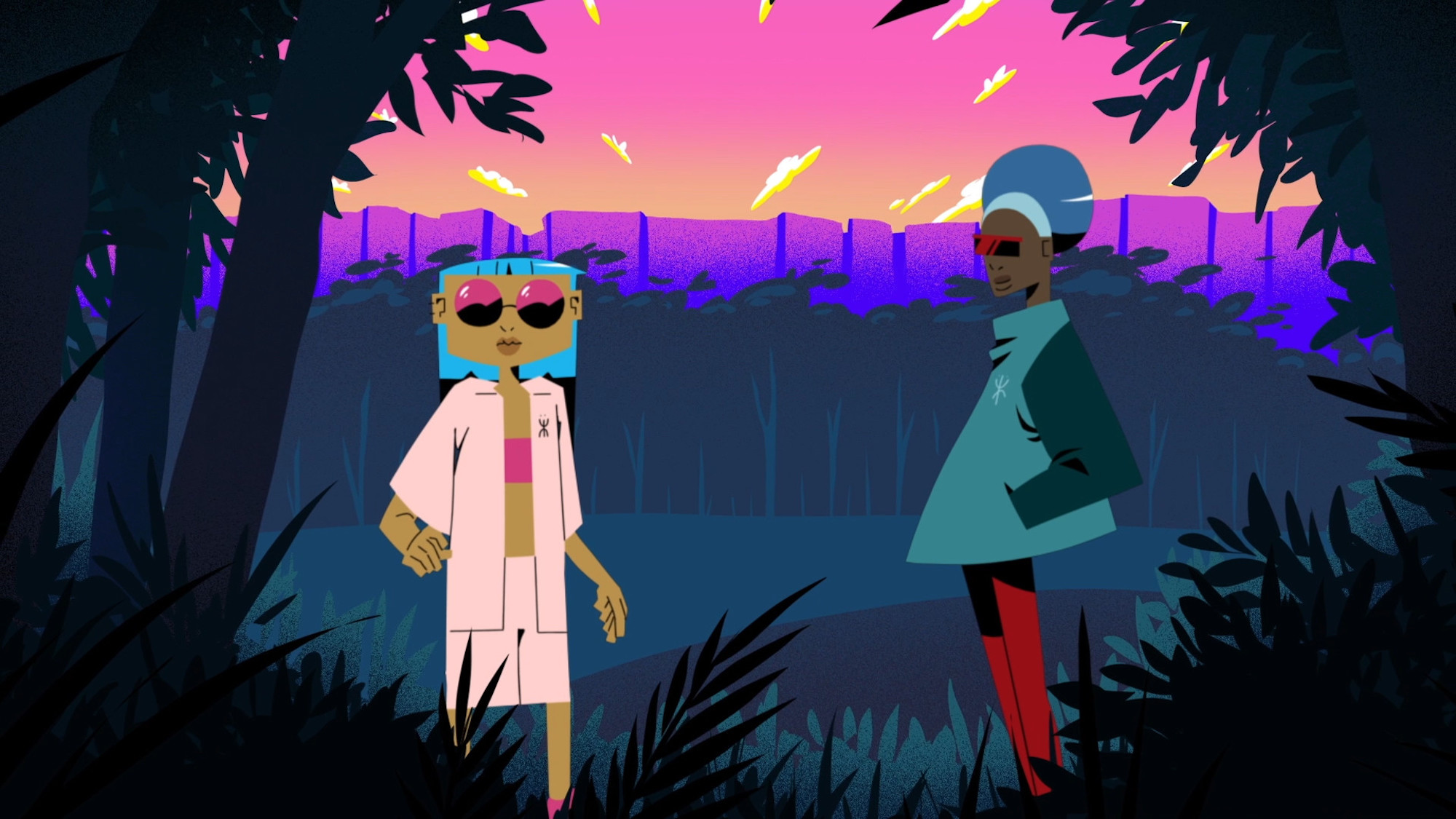 It’s impossible (especially if you ever travel to Spanish-speaking countries) to escape the sounds of reggaeton hits such as Gasolina or Despacito, originating in the barrios of the American overseas territory of Puerto Rico. Nonetheless, while world-conquering genres like punk, reggae or hip-hop can be said to have their own cinematic language, reggaeton has yet to develop its own visual culture. It was the mission of Kristian Mercado Figueroa (last seen on DN here) to create a Latinx futurist vision of Puerto Rican life that blends the genre of music with Afro-indigenous myths and cyber-punk aesthetics. Replete with oversaturated colours that evoke video-game representations of Miami with cityscapes straight out of anime, Nuevo Rico is a bold animated tale of two artists trying to find an authentic way to become reggaeton stars. We caught up with Figueroa for a chat about the importance of reggaeton to Puerto Rican culture, representing a mix of different ethnic influences and the dizzying variety of animation styles on display in his SXSW winning short.

Tell me about reggaeton and its importance to Puerto Rican culture?

It came out of the “Dem Bow” beat which is from reggae and Shabba Ranks. It kind of started in Panama but then really took root in Puerto Rico and the Casa de Dios (public housing projects) there. It’s a medium that has its own flavour and vibe but it’s also become so prolific in the world right now and one of the biggest music genres globally. It’s become this cultural phenomenon.

It’s interesting because Puerto Rico is such a small island but has such a deep cultural impact musically. I just find it super dope and think it has a crazy rhythm. You can feel the cultural imprint of all these things mixing in the music.

And why did you want to use this music as a way to anchor the story?

What’s interesting about reggaeton is that it doesn’t have that cinematic language. I was really interested in establishing what that cinematic language can be. You know what a hip-hop film is; there’s a texture to it that we can understand. I think there are a lot of stories in reggaeton that haven’t really been explored. I was interested in exploring the boundaries of what that means and expressing it in a visual storytelling medium. 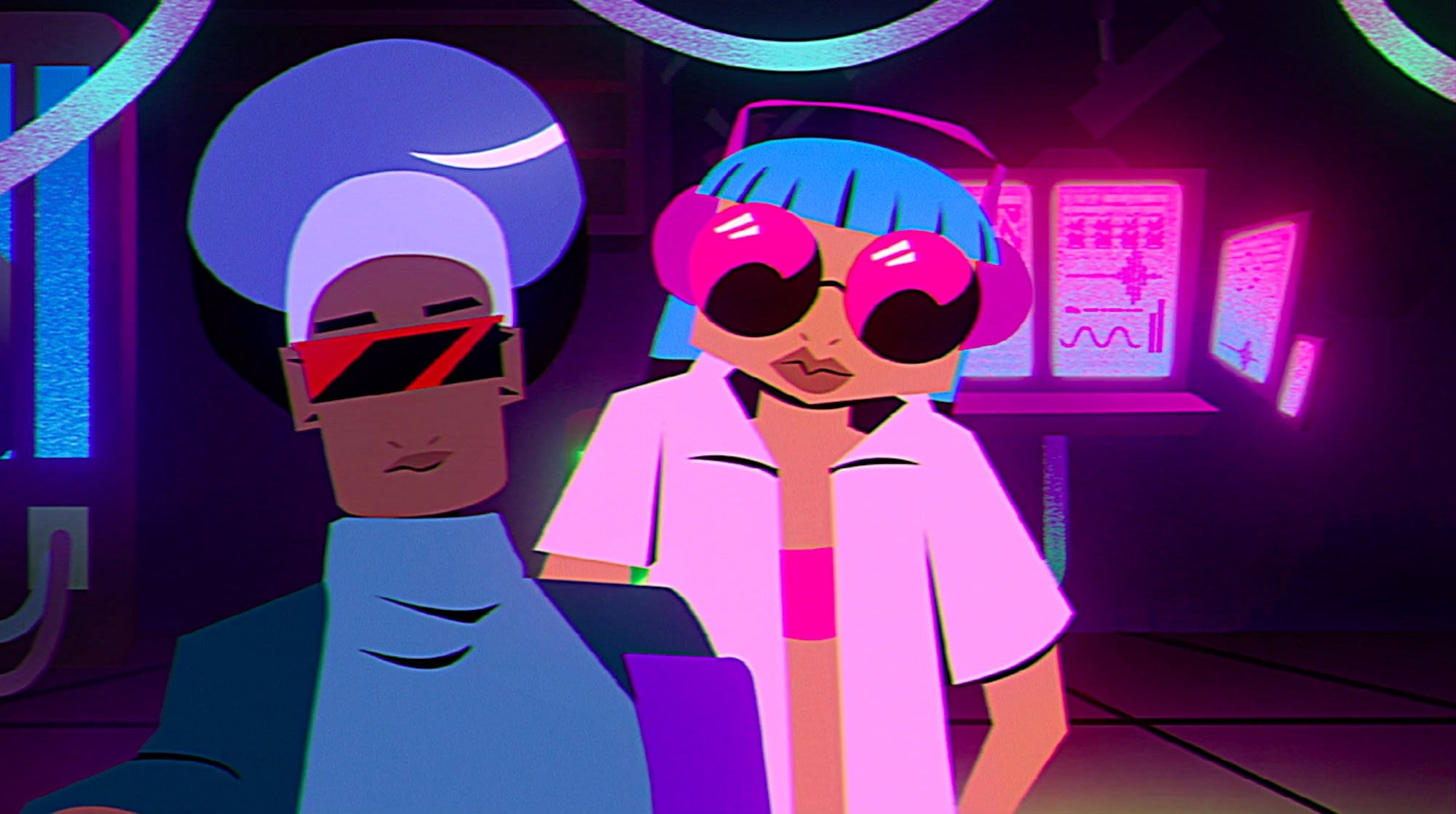 You have said that this is an example of Latinx Futurism. Can you tell me more about the whole aesthetic?

It’s this expression of investing and projecting into the future. Afro-futurism comes from like Sun Ra and Octavia Butler. It was experiences that were afro-centric and Puerto Ricans are an afro-indigenous people. So I was just looking at projecting us into the future and how speculative fiction or futurism projects an idea to the world about how we exist in a space.

I take a lot of references from cyberpunk — one of the biggest references was from Neuromancer. There’s a scene where they dock into a Rastafarian spaceship called Zion. I always loved that scene because it was so cool to see a space station run by Rastafarians. It made me think about what a future Puerto Rico might look like.

Puerto Rico is such a small island but has such a deep cultural impact musically.

So Puerto Rico is a bit like Cuba: more Afro-Latino than just Latino, with a mix between Spanish and African culture?

We are a mix of Afro-indigenous and Spanish influence and it all kind of mixes up. Puerto Rico is such a transient place and was one of the main points of the slave trade. It’s also one of the first places where the conquest started to happen when Christopher Columbus lands in the Caribbean and the genocide starts. So it’s all just part of our existence. 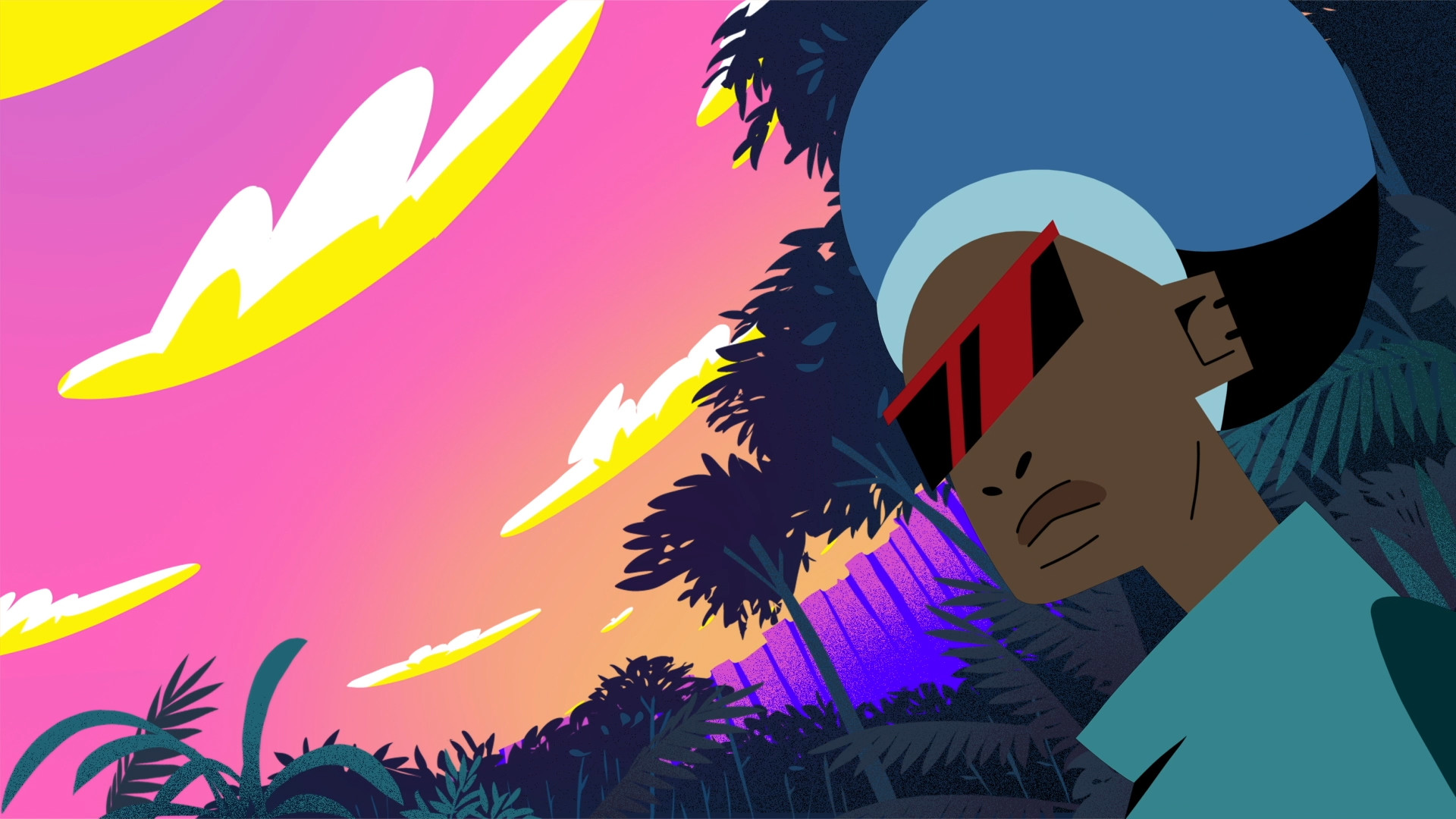 You have these gods in the film who offer this poisoned chalice to our protagonists. Was this something you had to research or did you grow up with these myths?

It’s something I grew up with. In Puerto Rico, your afro-indigenous roots are embedded into the culture. There are a lot of traditions rooted in dance, like Bomba, which comes from Africa. A lot of our words come from Africa too. As far as the indigenous reference, our tribe was the Taíno. We are their descendants and there’s a cultural imprint left behind in our culture, whether it’s the food, the words or the names of some of the towns. We take a lot of the myths. And I’ve always been deep in that and pulling from that.

Walk me through the animation style and the types of technologies you used here? Am I right that this is your first animated short?

I’ve worked on a lot of random Adult Swim animations and little commercials, but this was my first stab at a long form kind of short. The animation style is really rooted in this idea and cross-pollination and mixed media which speaks to what the Latinx experience is in America in general.

We had cell animation, both digital and traditional. We did a lot of post-processing as well, including analog processing where we ran clips through a CRT TV and then filtered it. There’s a lot of weird blends. We had CGI and sometimes we would do draw-overs. There was a lot of Photoshop painting and illustration too. It was kind of an elaborate process. We kept ping-ponging pieces back and forth between different animation partners and collaborators. There was always this collaborative spirit that made it a wild and fun process. 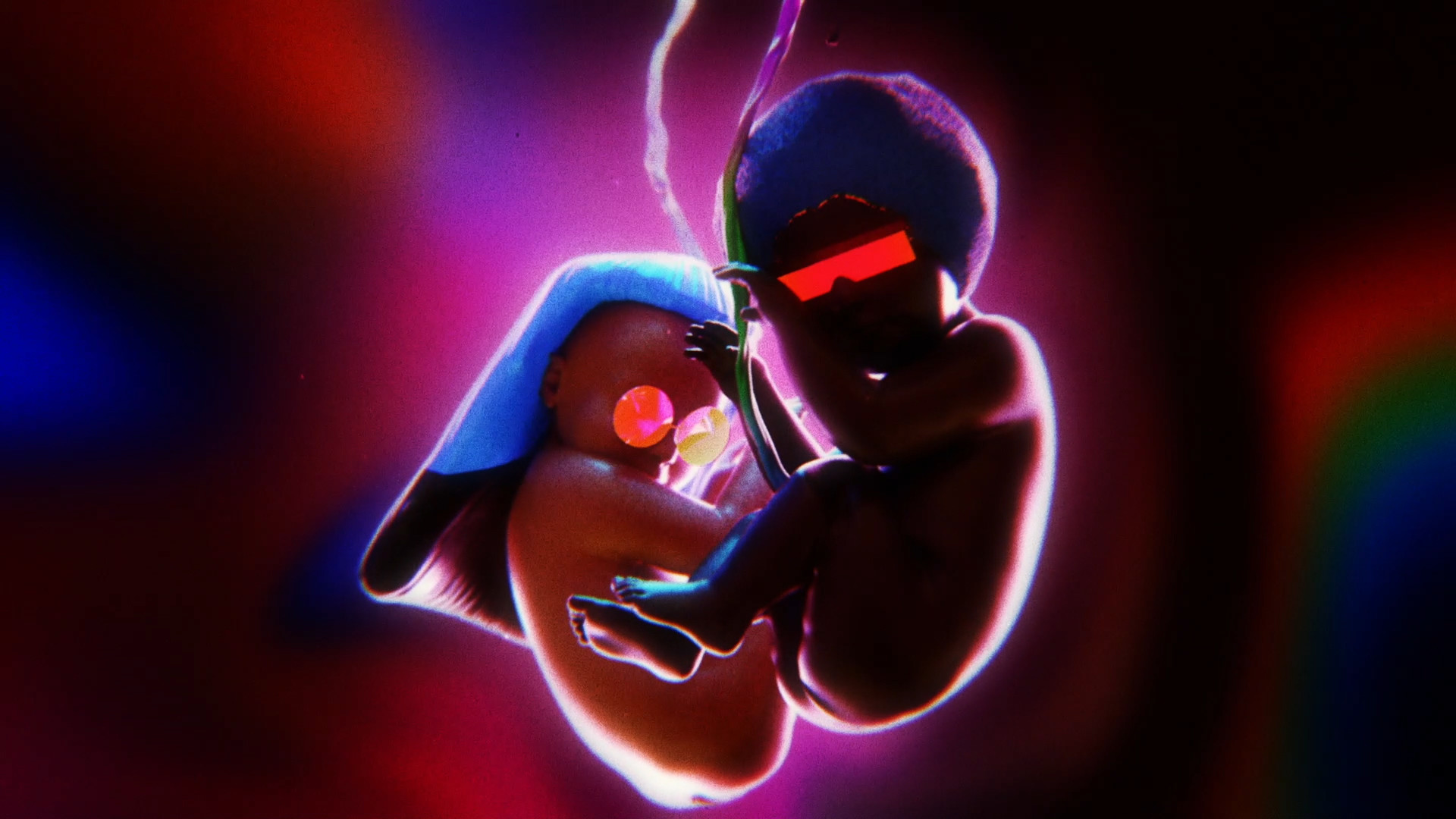 The aesthetic and oversaturated colours, as well as the way the film depicts Miami kind of reminded me of the game GTA Vice City!

I loved Vice City. Hotline Maimi is a crazy one too. There’s just a lot of wild colours. Miami is kind of the gateway to Latin America that feels symbolically like a kind of promised land. It’s kind of like southern Vegas with a lot of deep roots in Latin culture. You could live there and speak Spanish and be comfortable. It’s kind of like a second home and has many layers. Right now there’s a lot of youth culture trying to reclaim what Miami is. Also I love things that are oversaturated, I love colour and I love things that hit you on a visceral level so you have to pay attention. It almost feels like candy.

Tell me about the larger political context. The film has this dystopian feel and even has a pointed Trump reference. Puerto Rico is an unincorporated territory right?

How it works is that Puerto Rico is technically a commonwealth. The reason is that you can’t really say colony on paper as it implies imperialistic language. Puerto Rico is a territory that has never really experienced any autonomy. It went from a colony of Spain to a colony of the USA. Our experience has always filtered through imperialism. We exist in this weird realm of in-betweenness and how much we have to say over our own future is really questionable. We don’t even have senators or a say over the president. 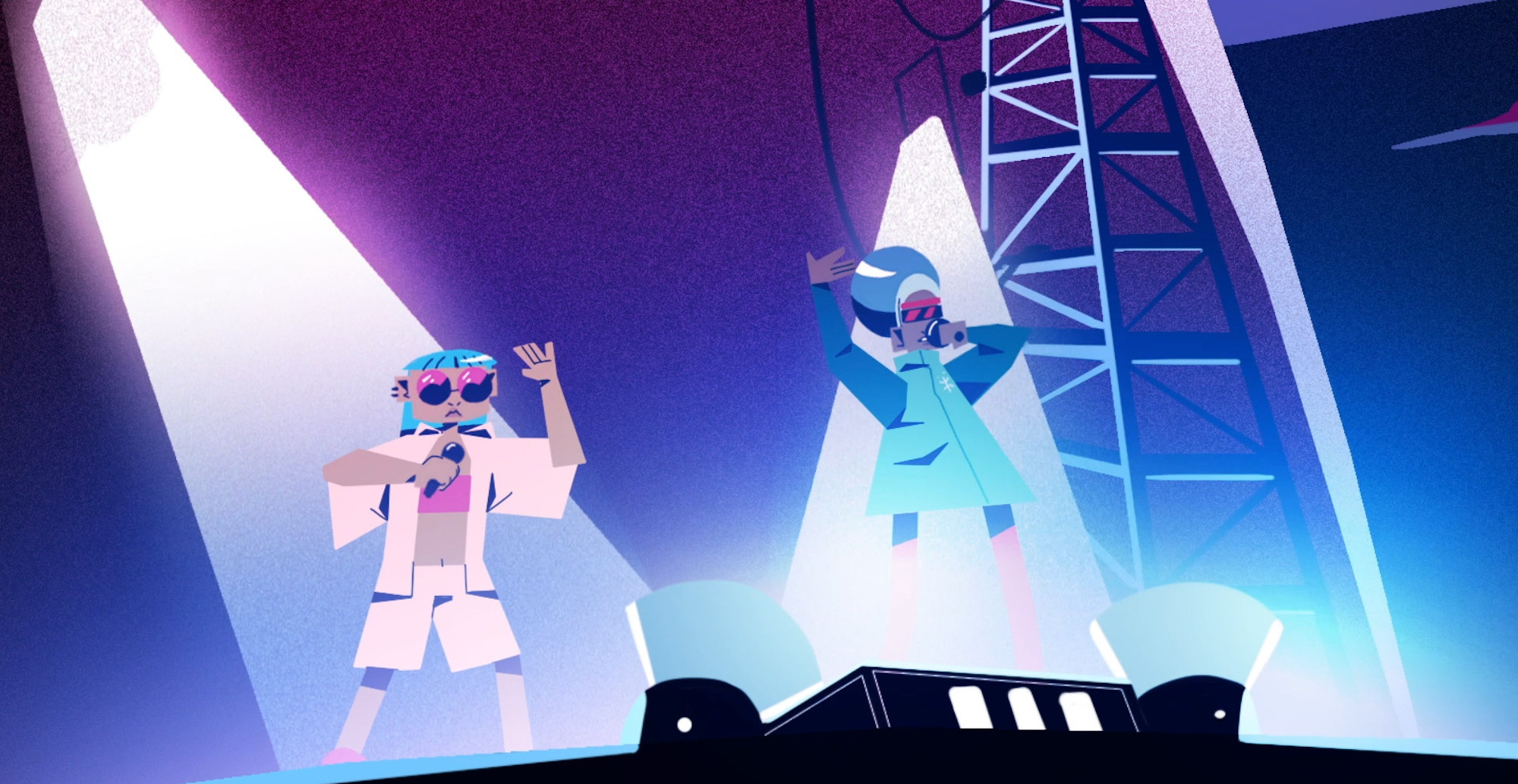 It kind of functions as a kind of broken state, where there’s a lot of lax tax laws but it’s not really beneficial to the people there. So we do exist in a complicated space. Anytime I make anything about being Puerto Rican, it’s really centred around the idea of where we exist currently, what the future means, or what our relationship to the USA means. All these things are kind of peppered in.

I’m really excited to keep exploring stories of people and themes that haven’t been seen normally.

Nuevo Rico won at SXSW, what was that like?

Oh man. It was kind of unexpected. I was just honoured to be accepted to be honest. Just to be able to screen the film was pretty much an achievement. Finding out we won was kind of this epic feeling: really overwhelming and kind of crazy.

I’m fortunate enough that I’m going to be developing Nuevo Rico into something bigger. And I’ve got a couple of other projects. I’m still doing comedy specials and working on my own stuff. I can’t completely talk about that, but I’m really excited to keep exploring stories of people and themes that haven’t been seen normally.