DN last spoke to Joe Loftus for his deliciously dark animated tale Wooden Child. Today, he returns to the light with his latest short film Girl and Robot, an ode to the action-packed animated adventure films he grew up loving. Girl and Robot follows a lone wanderer through a desert landscape as she seeks to escape the grasp of the local law enforcement. Whilst seeking refuge, she accidentally stumbles upon a plucky robot who she can’t quite shake. The joy of Loftus’ film comes from how familiar yet different it feels. He takes a plot we know and love and infuses it with a sense of wonder, comedy and thrilling action. All of which he animates fluidly with a real sense of passion and zest. Directors Notes sat down with Loftus to learn more about his own epic journey when making Girl and Robot, revealing his impractical yet proactive approach to animation.

What motivated you to animate a sci-fi fantasy adventure short about a young woman on the run?

Girl and Robot was an idea forming in the back of my mind for a few years. I had all the story beats of multiple versions written out but it felt way too big to make into a short animation so I was thinking about trying it out as a comic but it didn’t feel right for the story, shots kept coming to me so it kind of set its own demands and set its own ball rolling at the start.

I wanted to create that feeling of excitement in the action scenes but also a bit of a heart for the characters to bring the viewer along with it.

I decided I had to make it as an animation but I ended up settling on telling part of the story as I didn’t want to be working for ten years before I could share something. There’s a lot more to the story as this is very much part one of a bigger tale. The story is inspired by the type of action anime I grew up watching and there are a few references in there testifying to it. I wanted to create that feeling of excitement in the action scenes but also a bit of a heart for the characters to bring the viewer along with it.

Once you landed on the story, did you move on to animating the film from the get-go or did you storyboard everything first?

Once I felt I had the script nailed I went straight into storyboarding on a notebook. I boarded a section at a time and went straight to final animation with those shots without any cleanup. That way I was always moving from pre-production to post-production throughout the film. This may sound a bit impractical but it was a great motivator to keep working on the film as it took over a year to animate and sequences were constantly surprising me and I could add stuff as I went if something felt missing. It felt like a really organic way to work. If I had boarded the whole thing first, I think I would have more trouble staying motivated to work on it as it would have been all figured out already. This kept the process fresh and exciting.

Did that process of moving from pre to post and back again so fluidly make everything quicker or more drawn out?

The whole film took about a year and a bit to make, as I said it was a loose process, keeping the motivation alive was pretty easy with all the support and excitement of seeing it come alive shot by shot. I knew the story but not how it would flow. 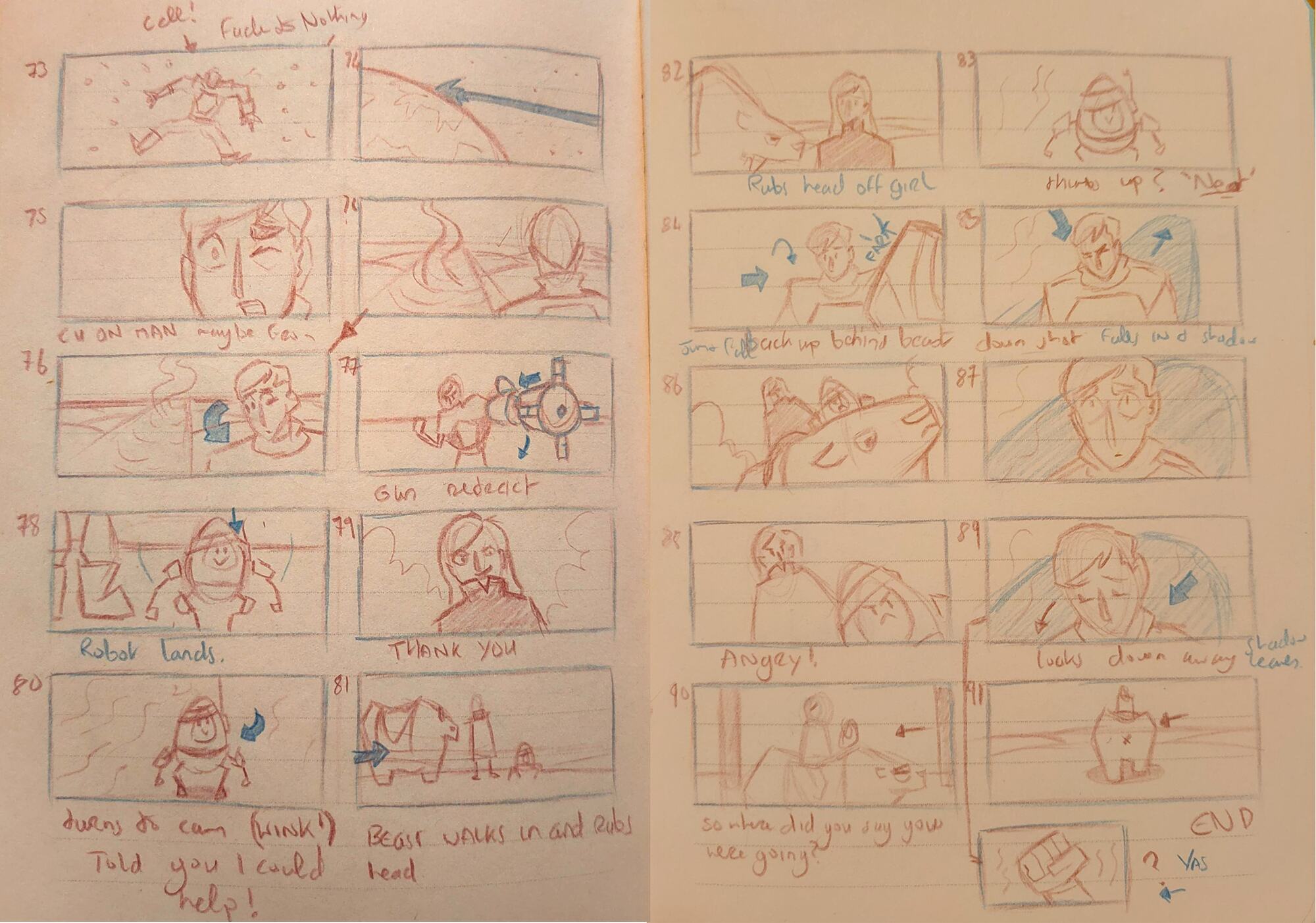 What did your voice actors bring to the film other than their excellent vocal work?

The voice actors, Feena Glynn, Andrew Dickson and Richard E Hegarty, were fantastic and I was very lucky to find them, each one I shared the script with was so supportive and really brought the characters to life incredibly well. It’s a very weird point in the production to hear the character talking, really feels like it’s coming to life.

And other than your voice actors, who else did you work with in bringing Girl and Robot to life?

Once I had a few shots put together I felt confident enough in the idea to get some help so I contacted Mike Andrews, the editor on Girl and Robot. We had worked together previously on an unannounced show and it was a great experience so I reached out to him to see if he would be interested, we have been working together since. It was a huge help to have that extra pair of eyes to critique and to share in the excitement for the story.

What software did you use to animate everything?

The film was animated digitally in Adobe animate then composited in After Effects to add that nice depth to the scenes.

I boarded a section at a time and went straight to final animation with those shots without any cleanup.

Could you talk a bit more about the films or anime that inspired Girl and Robot? What were you drawing from and how did you reference them in the film?

I’m a huge fan of Dragonball Z and the excitement and energy of the battle scenes, I remember getting so pumped watching it as a kid. I really wanted to show as much of that as possible in Girl and Robot as it’s a nice nod to the spark that started it all. The fight and the huge energy blast seen from space are definitely a nod to this too! I was also a big fan of Digimon back in the day, especially its character evolution sequences. The scene where Robot transforms is a nod to this too. The music definitely tracks this high energy excitement and Simon Tebbenham absolutely knocked it out of the park with his amazing score.

How do you find the process of directing voice actors and what have you learnt as an animator by working with them?

I learned a lot from seeing how it worked on the TV shows I worked on so I went into it a bit more prepared on this project. I made a version of the script with acting notes and what I was hoping for the delivery of each of the lines but I was emphasizing that the voice actors should feel free to work around what they needed to and add any acting beats they needed too. So much came back that I didn’t anticipate and added so much to the characters. The voice actors were brilliant and knew exactly how to bring these characters to life through their own experiences. The voice acting really led the animation and really gave so much life to bounce off when I was animating.

It’s a very weird point in the production to hear the character talking, really feels like it’s coming to life.

You last spoke to with us for Wooden Child back in 2018, how do you feel you‘ve progressed as an animator from that project to this one?

I like to think that I’ve learned a lot since then. Since then I’ve worked as episodic director and director on a show that has yet to be announced, that experience really gave me so much insight into how to tell stories and develop interesting characters. I’ve also learned a lot about how to appeal to an audience from my own experience with Wooden Child. I still like parts of Wooden Child but overall I think parts of it didn’t work. I think Girl and Robot is a return to form in that the design of the world and characters knits with the narrative in a much better way.

What’s your next animation project?

I’m well into production on a new horror short called Still Up There it should be coming in the first half of next year. It’s nice to revisit horror with all I’ve learned since Wooden Child and hopefully tell a more chilling surreal story. I’m also hoping to continue the story of Girl and Robot at some point in the future, there’s a lot more of the story to tell.