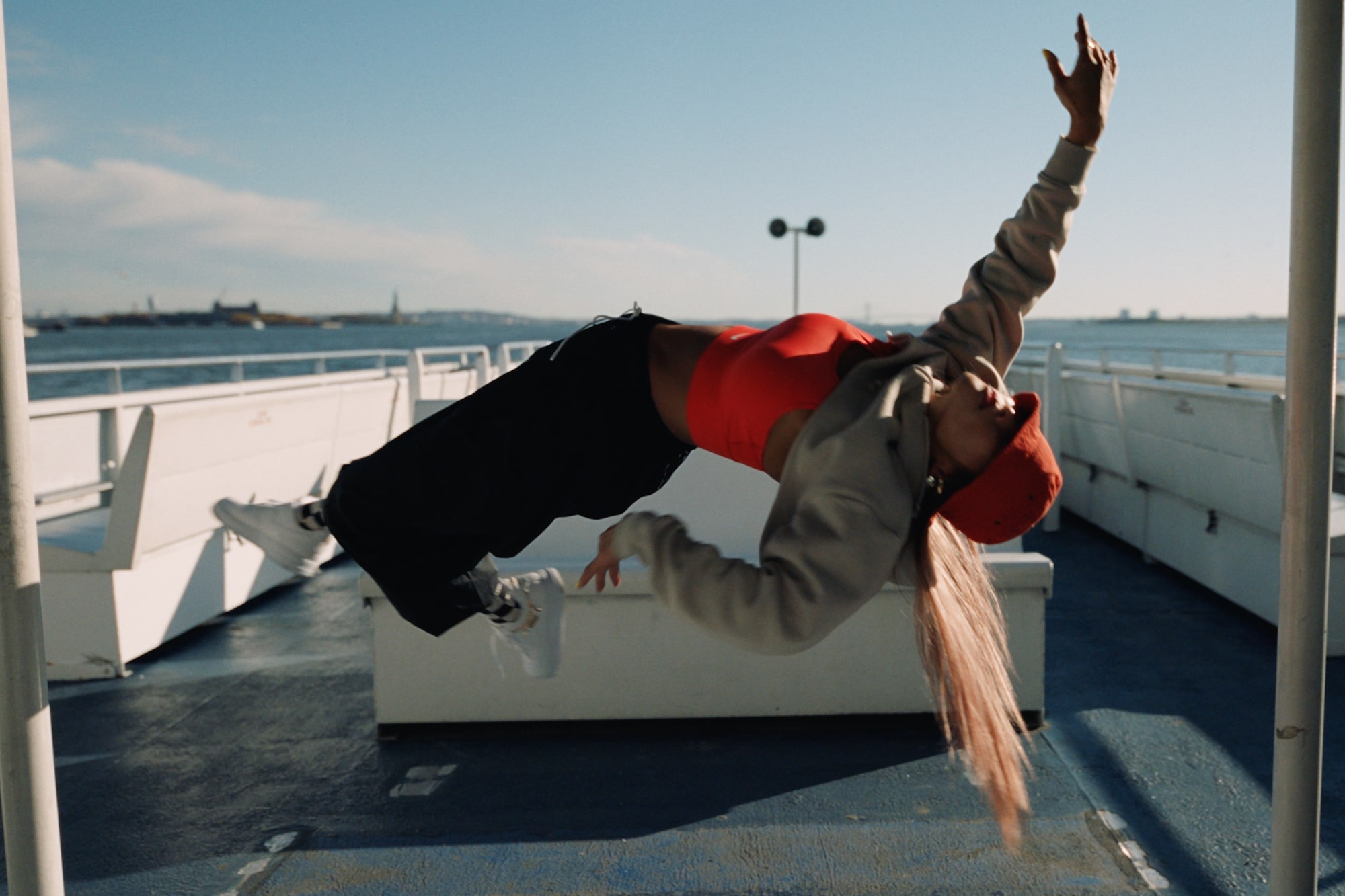 New York city is often a character in so many movies, an ever-changing backdrop for fantasy, romance and personal self-expression. As Own The Floor shows, it is also the perfectly inviting stage to move your hips, shake your feet and try something new. Ben Dean (last seen on DN here) returns to share his latest creation, a collaboration with Nike that invites the city’s best dancers to take to one of the largest stages possible — expertly blending frantic hip-hop and breakbeat music, stylised portraits, fast-moving camerawork and intimate voiceover in order to share their view of the city and of their place in it. The final result is a propulsive dance piece with a truly panoramic overview of one of the world’s most vibrant places. We caught up with Dean to talk about creating fluid camera moves, finding freedom in movement, and seamlessly integrating the music with the personal testimonies of the dancers.

Tell me how you got the commission with Nike and what the brief looked like?

The team at Nike NYC reached out to me to pitch on their latest campaign for “Own The Floor”. The brief was all about these New Yorkers reimagining NYC as their dance floor, pushing the boundaries of what dance and dancers look like while finding power and freedom in movement. For them, dance is the ultimate form of self-expression, and NYC is one big stage.

The plan was to be really dynamic and playful with the camera to complement the dynamic nature of the way dancers move.

After Shelter In Place, which was all shot inside, was it fun to work on a dance film that was way more expansive in location?

Absolutely. I was fortunate enough to recently shoot a music video for Nas which featured Dijah McFee dancing through parts of New York, so it was fun to expand on more outdoor locations. But this latest Nike film certainly gave me more freedom to show NYC as a whole. The idea was to capture our dancers in more intimate settings (their ‘studio’) and that NYC was their ‘stage’ to shine. I wanted to capture the exhilarating, hectic fun of living in New York, a city that lets you be whoever you want to be, as well as the small special moments New Yorkers experience where they can take a break from it all, connect with themselves, wind down, think, imagine and practice. 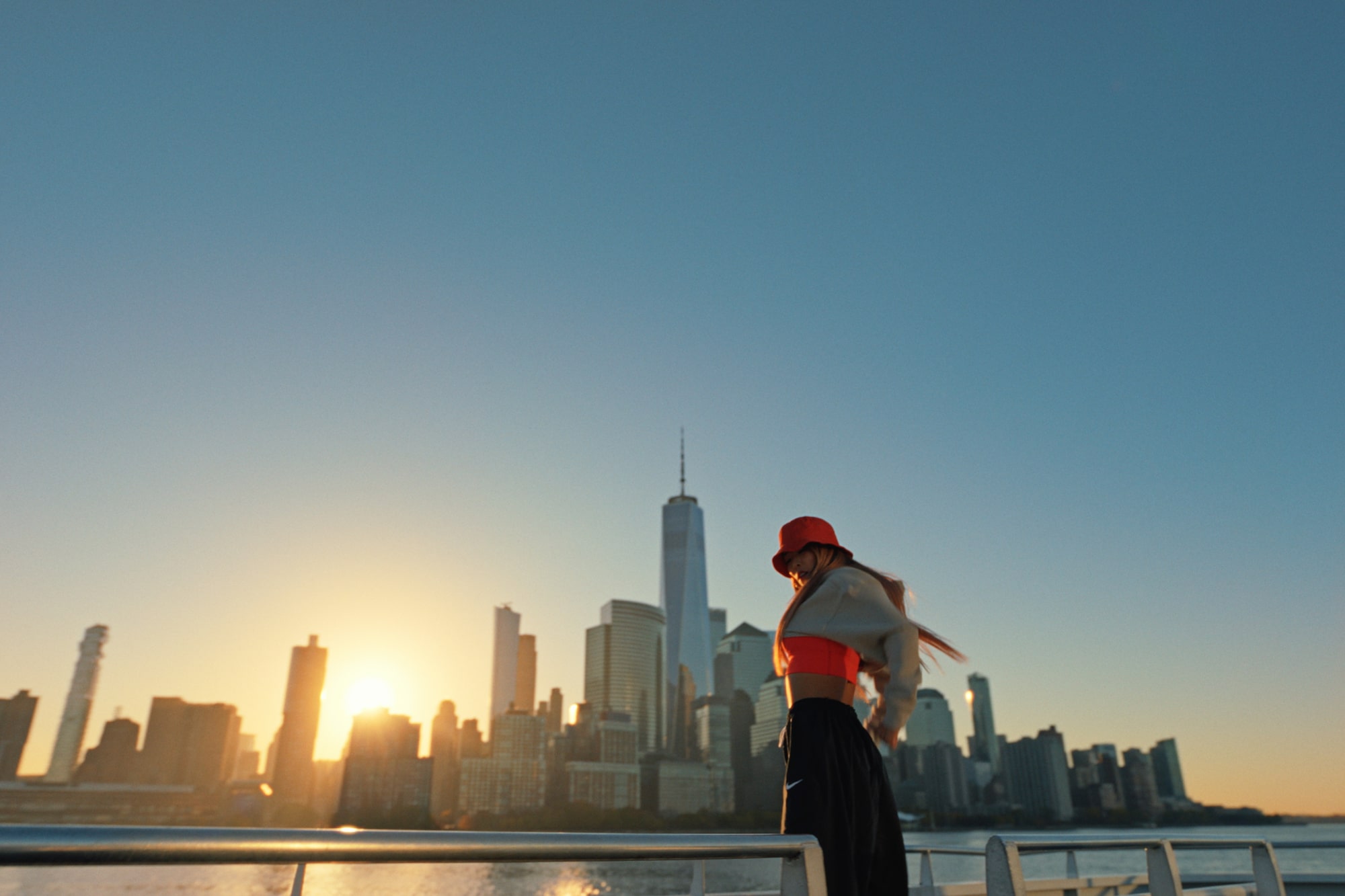 The camerawork seems so fluid, especially with the spinning shots. Can you walk me through the technical set up and how you wanted to approach the project visually?

Visually, the plan was to be really dynamic and playful with the camera to complement the dynamic nature of the way dancers move. I wanted to capture them from interesting angles and use an array of techniques and transitions, not always relying on simple cuts to transition from dancer to dancer. The majority of the spinning movements were done handheld or on the Movi, except inside the washing machine which ended up being more technical than we thought. Was a fun setup though. Shout out to our DP, Scott Cunningham, who crushed the film!

Also I really want to know how you shot the woman eating the pizza! Was the camera literally in the pizza box?

Yep! That was done down and dirty, simply cutting open a pizza box. Wasn’t sure it was going to work but it ended up being one of my favourite parts of the film, bringing a fun moment of levity. 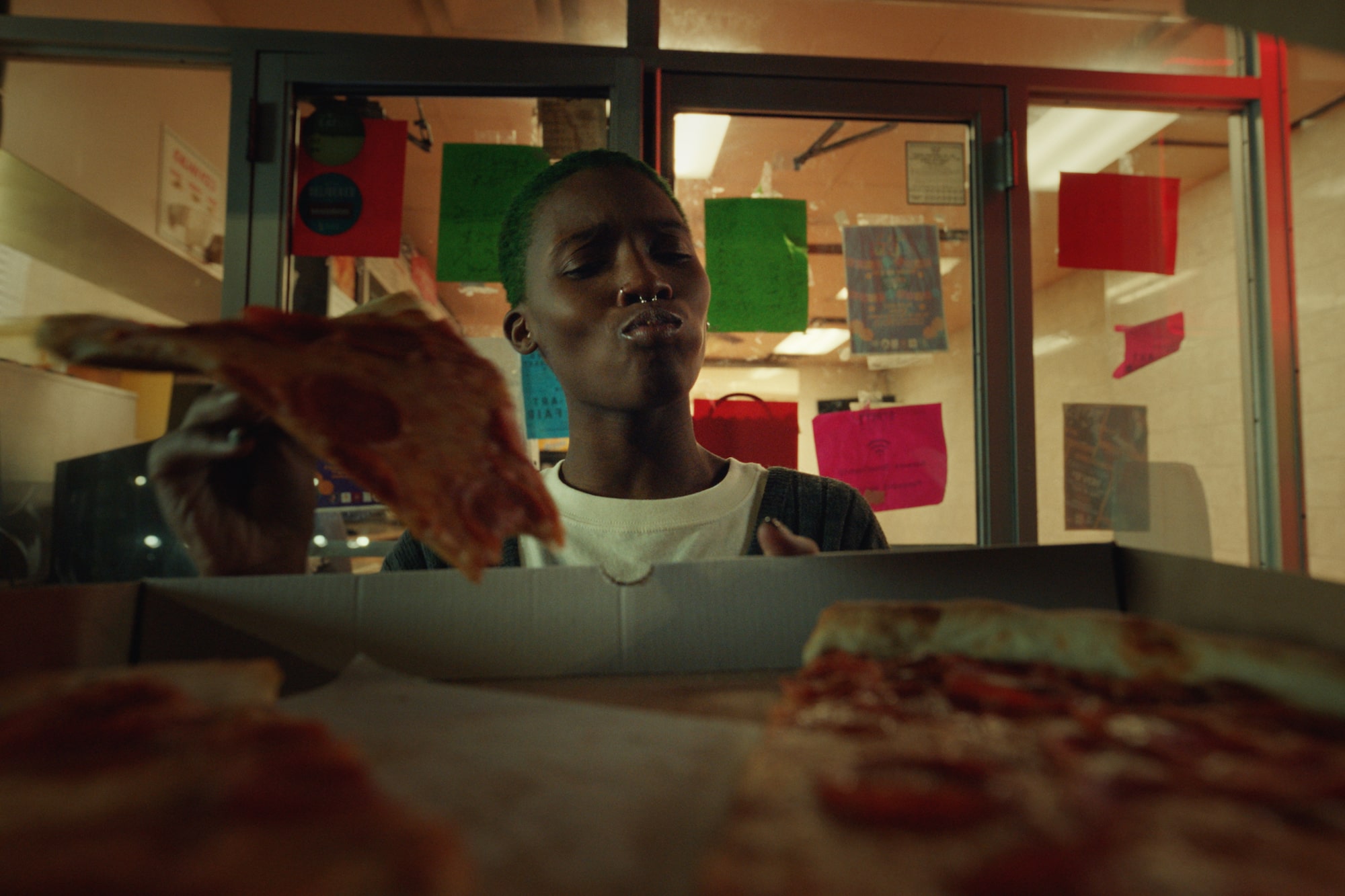 What was it like bringing the dancers together? Was there a long casting process?

The music and the narration seems very intertwined, almost as if they are in conversation with one another. Can you tell me a little about working on those together?

Each dancer has their own unique story, so the goal was to create an eclectic score to reflect that. I wanted to integrate the dialogue into the score since this film is about dancers expressing themselves in both words and motion. We also added particular sounds and beats to heighten their movements and certain things they said.

It was an ambitious shoot so we made sure we were prepared, boarding up every shot and prioritising on the day.

New York is all one stage in this film, from the ferry from Long Island to the subway stations to the laundromat; you must have had a lot of fun looking for the right location?

Absolutely! I wanted to capture the grit, energy and charm of the city but in locations that feel a bit more unexpected and show NYC in a way that we don’t always typically see. Yet also featuring locations that feel relatable when it comes to zoning out and being able to express yourself during a crazy chaotic NYC day. 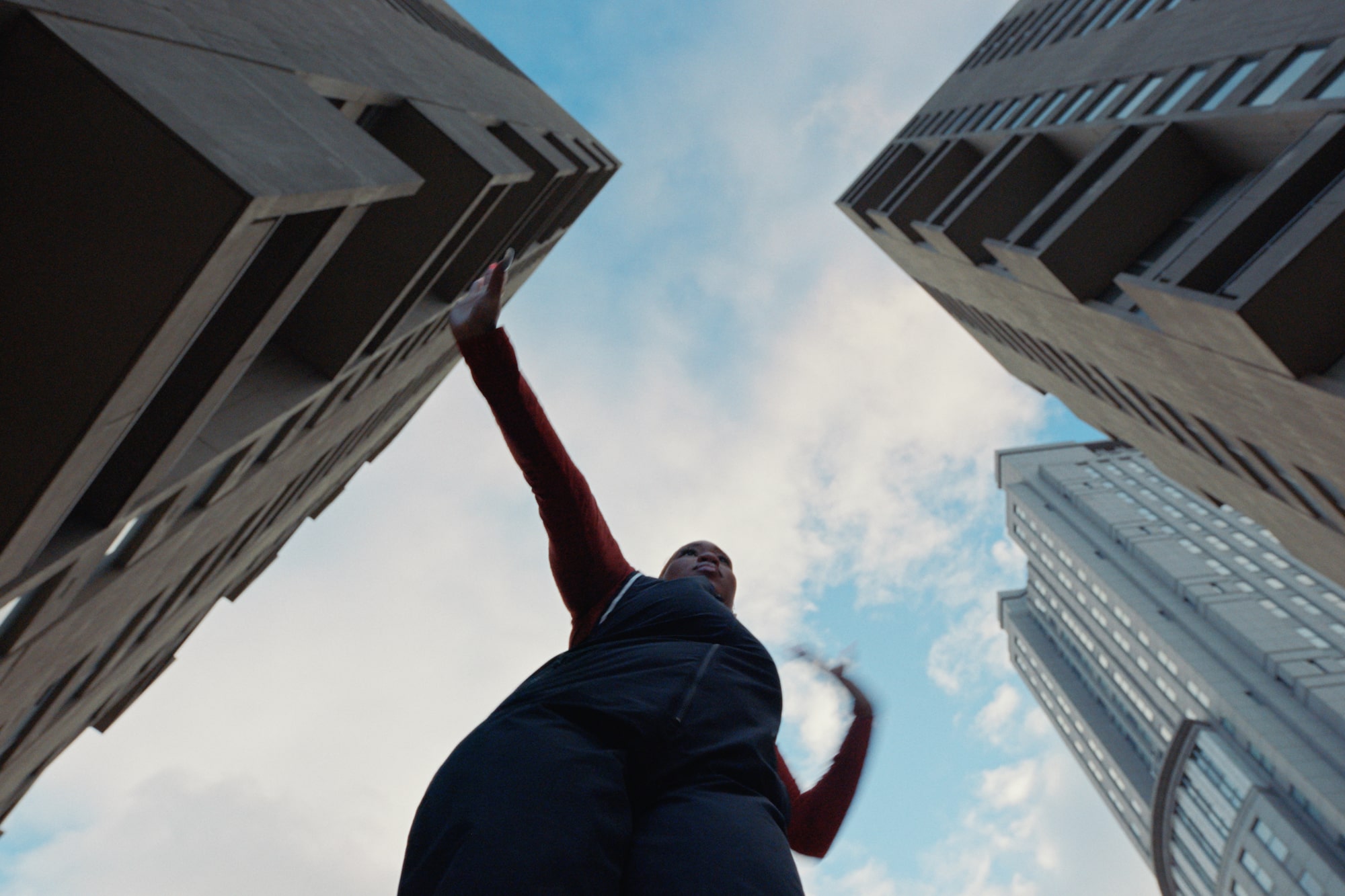 How did you collect these reflections from the dancers? Was this narration something that came quite early in the project? Did you give them questions beforehand?

We gave them questions beforehand then interviewed them the day of rehearsal. Except for Aiyr, who I interviewed in a van around 10:30pm after wrapping the pizza scene as the rain was coming down hard!

Each dancer has their own unique story, so the goal was to create an eclectic score to reflect that.

I loved the seamless editing between shots, especially the way they match camera movements. Was this something that you had planned in advance, or did you find these transitions later through the edit?

A bit of both! We had definitely planned a lot of the transitions and match cuts, for example, the match cut scene where each dancer performs the same routine towards the end of the film. Big shout out to our Editor Jordan Orme who did an amazing job of finding some match cut gems during the editing process. 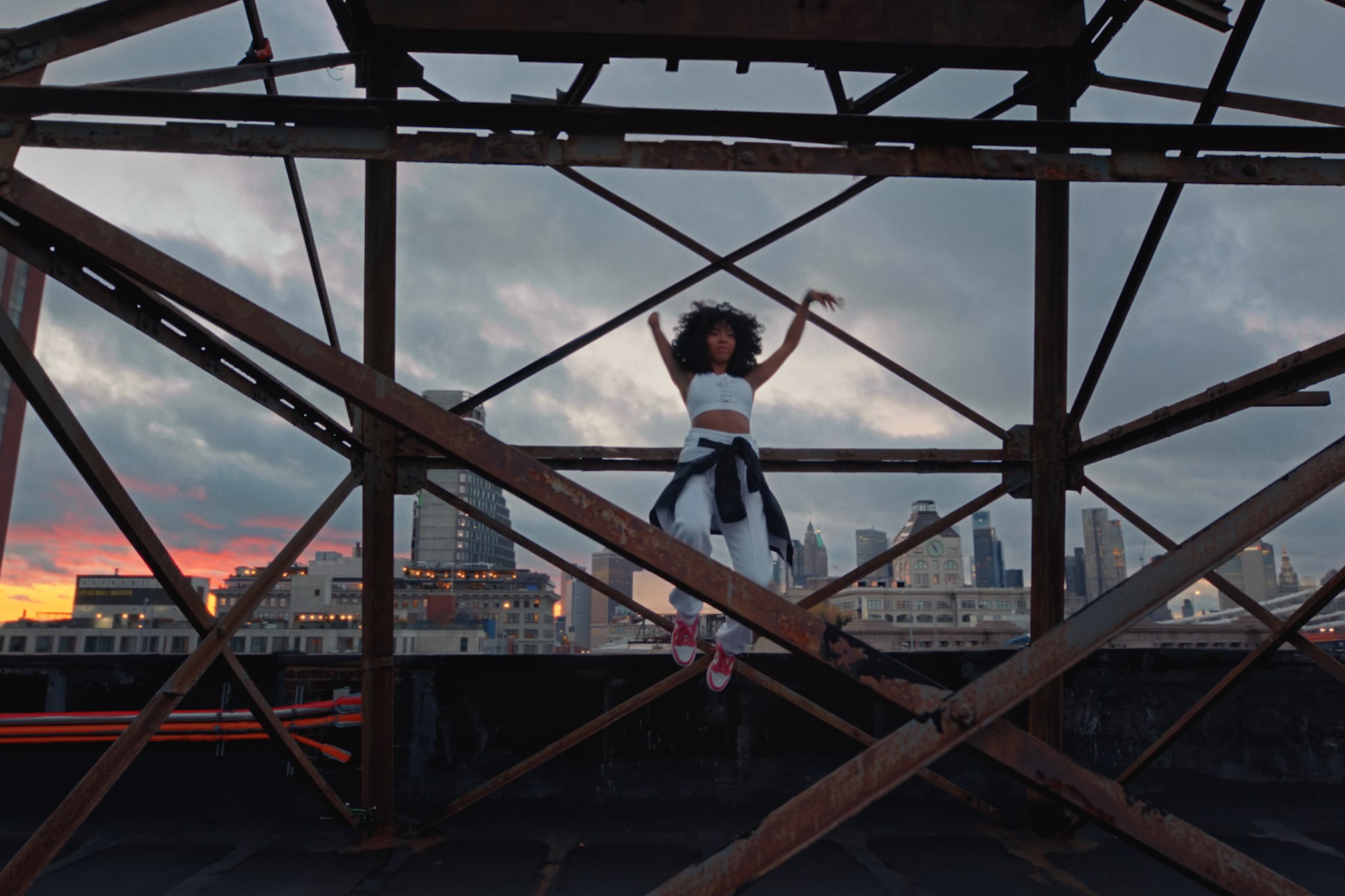 There are so many shots, but each one seems to have its own point-of-view and attitude. Did you have much time to set up when looking to create each micro-scene? What kind of camera equipment did you have?

Not really since we had limited days and so many locations to hit. It was an ambitious shoot so we made sure we were prepared, boarding up every shot and prioritising on the day. We had two Alexa Minis running and shot both handheld and on the Movi. Then we used a bodycam mount which was a ton of fun!

I’m actually on vacation back home in Australia visiting family and friends but will be ready to rock end of January. Let me know if you have anything fun cooking!