It seems strange now to think back to a time where the far-right movement didn’t seem as prevalent in modern culture as it is today. A historically ever-present movement that gained major media presence when Trump arrived in the White House in 2016. So it’s fascinating to look back to that year and witness the kernel of the movement take its hold on modern America on a grassroots, personal level. Robert Hope encapsulates this period with his documentary Heaven on Earth, a film which is both an intimate account of Hope’s journey as an aspiring actor renting a shed in an ex-commune in Los Angeles and the slow radicalisation of his eccentric landlord. DN is proud to share this film with our audience today for its online premiere and speak to Hope below about its organic genesis, his ongoing development as a documentary filmmaker and the desire to capture this unique moment of history.

There’s a really organic, unfolding structure to the narrative of Heaven on Earth. How premeditated was the idea for it?

Heaven on Earth was made without a plan. When I started filming this documentary I had no understanding of how to make a film but I knew that what I was experiencing and witnessing on that ex-commune was so mind-altering and significant to me that it needed to be documented. Right after moving to LA to pursue acting in 2015, I found a little shed in the garden of an ex-commune in the San Fernando Valley in Los Angeles. There was no bathroom or kitchen, but it was $500 a month with no lease. I moved in and was immediately fascinated by the property. Everything on it was broken: the hammock, the Asian statues, the Zen gazebo, the pagan crystal garden. The book cases were full of old titles like Meditating with Children, The Trillion Dollar Conspiracy, and The Herbal Cancer Cure.

Margie, a charming old hippie woman with no teeth, owned the house and was my new roommate. She was nocturnal, agoraphobic, loved ice cream and drank full gallons of Carlo Rossi and used the empty jugs to store water in for the end of days. From 10pm to 6am every night I could hear Alex Jones playing from the hallway leading to her room. At the time I didn’t know who that was. This was in the very early days of the 2016 election when America thought Trump was a joke and the far-right conspiracy movement was still underground.

At what point did you take the decision to start filming and interviewing Margie?

As Margie and I were slowly getting to know each other, I bought my first camera, a cheap Canon DSLR and thought it might be cool to interview her. This turned into a four hour interview in which she told me the story of her life and how she went from the matriarch of a hippy commune to an evangelist of the far right. Underneath the muck of her dark ideologies, she was desperate to communicate an existential lesson on the need to come to terms with both exquisite beauty and terrible darkness within others and within oneself. She saw herself in me and by sharing these lessons she thought she could save me from the mistakes she had made.

I wanted to explore how far-right conspiracy ideology and paranoia take hold of people on a personal level.

After that day I started to film the property and my interactions with her little by little, not really knowing what I was doing or where anything would go. Simultaneously, though, I started to experience my own mental health issues that were exacerbated by my isolation. On top of this, Margie started trying to relentlessly convert me to her far-right conspiracies, cornering me every time I needed to make a meal in the kitchen. Because I was lonely and not good at confrontation, I listened. In the insanity of that election period and the strangeness of my personal life, I started to lose grip on what was fact and what was fiction.

That seems to be the thematic centre of the whole film. What happened next? And what drove you, on a personal level, to piece the whole film together?

Realizing this, I left the property, moved to a different part of LA, and began to build a more normal life: I found friends and a relationship, a steadier job. But as time went on, I started to see this fringe movement that Margie got wrapped up in spread rapidly and become part of the national conversation and transform into the QAnon movement. I saw Margie’s words echoed in many corners of society, spreading farther than I could have imagined, to the president, to people I knew.

The need to tell the story of my experience on the property became obvious. I wanted to explore how far-right conspiracy ideology and paranoia take hold of people on a personal level. I found both my subject Margie and myself to be unique examples of this experience. Margie had a PhD in psychology from the University of Virginia and had been involved in new age spiritual communities for much of her life but she endured a painful family trauma in her 40s that changed her ability to trust others forever. I was an agreeable liberal millennial and an artist struggling with my mental health and isolation.

So it became, for you, about the ways in which we can all succumb to these ways of thinking?

While experiencing Margie’s relentless campaign to convert me to this ideology, I saw first-hand how someone could slip into that delusional mind-frame under the right circumstances, no matter what background they come from. I witnessed how dangerous the combination of isolation, personal trauma, and the internet can be for someone’s mind; how people harboring a great pain or resentment find that conspiracy thinking offers a simple explanation and a sense of purpose.

So I started to edit the footage, using my old MacBook Air, learning as I went, shaping the structure of the story with my Producer Candice Nachman. Candice helped me realize that the situation, my friendship with Margie, and the realities of my life at the time were so absurd that it was tragically funny. So I began secretly filming recreations of myself at the elementary school I worked at, at my restaurant job; hiding my iPhone in a paper take out bag and cutting a hole for the lens. Using clips from the terrible films I had acted in.

I felt that the burden for me as a filmmaker in this story was to honestly capture Margie while not presenting her unwellness in an exploitative way.

The ending of Heaven on Earth is incredibly bittersweet. How has the journey of making it helped you come to terms with your direction?

Three years after leaving the property, I visited one time for a final interview, having no idea that Margie would pass away a week later. For six months after that I edited the film throughout the pandemic. The four year long journey of making this film has been the journey of myself falling in love with documentary filmmaking and changing my life path, starting with that first interview with Margie in 2015.

At the center of this film is a strange friendship, which felt important to lean on. Many of us have faced the bizarre burden of our loved ones slipping into this way of thinking. I wanted to showcase the complicated dynamic of dealing with that situation, especially when their evangelism turns towards you. I felt that the burden for me as a filmmaker in this story was to honestly capture Margie while not presenting her unwellness in an exploitative way. I learned that the way to do this was by committing to understand the humanity behind her delusions, without judging her or corroborating her beliefs. Facing these challenges reinforced for me what I believe is the point of making films: to ease the isolation of my fellow persons by creating windows through which we can see each other.

Why was it important for you to premiere this film with us at this particular moment at the start of 2022?

As America recently reached the anniversary of the Capitol riot with no sense of where these conspiracy movements will go, I believe this is an important time to release an intimate story about how it started. How an ideology captured the hearts of many Americans and travelled slowly from person to person, in the early days of 2015 — just as an ex-reality TV star put in a bid to run for president and caught onto a movement that continues to haunt us today.

I witnessed how dangerous the combination of isolation, personal trauma, and the internet can be for someone’s mind.

How much footage did you have to contend with in the editing process?

The most difficult part of working with the footage was that I shot very little vérité and B-roll of Margie in 2015-2016. At that time I did not really know if I was making a documentary and did not understand the need for a lot of coverage. In editing I had to use almost every single moment from 2015-2016; every little pause and in-between moment. I also had to fake certain things, using B-roll from my last visit with her when the camera couldn’t exactly see her face and putting it in the part of the movie from 2015-2016. 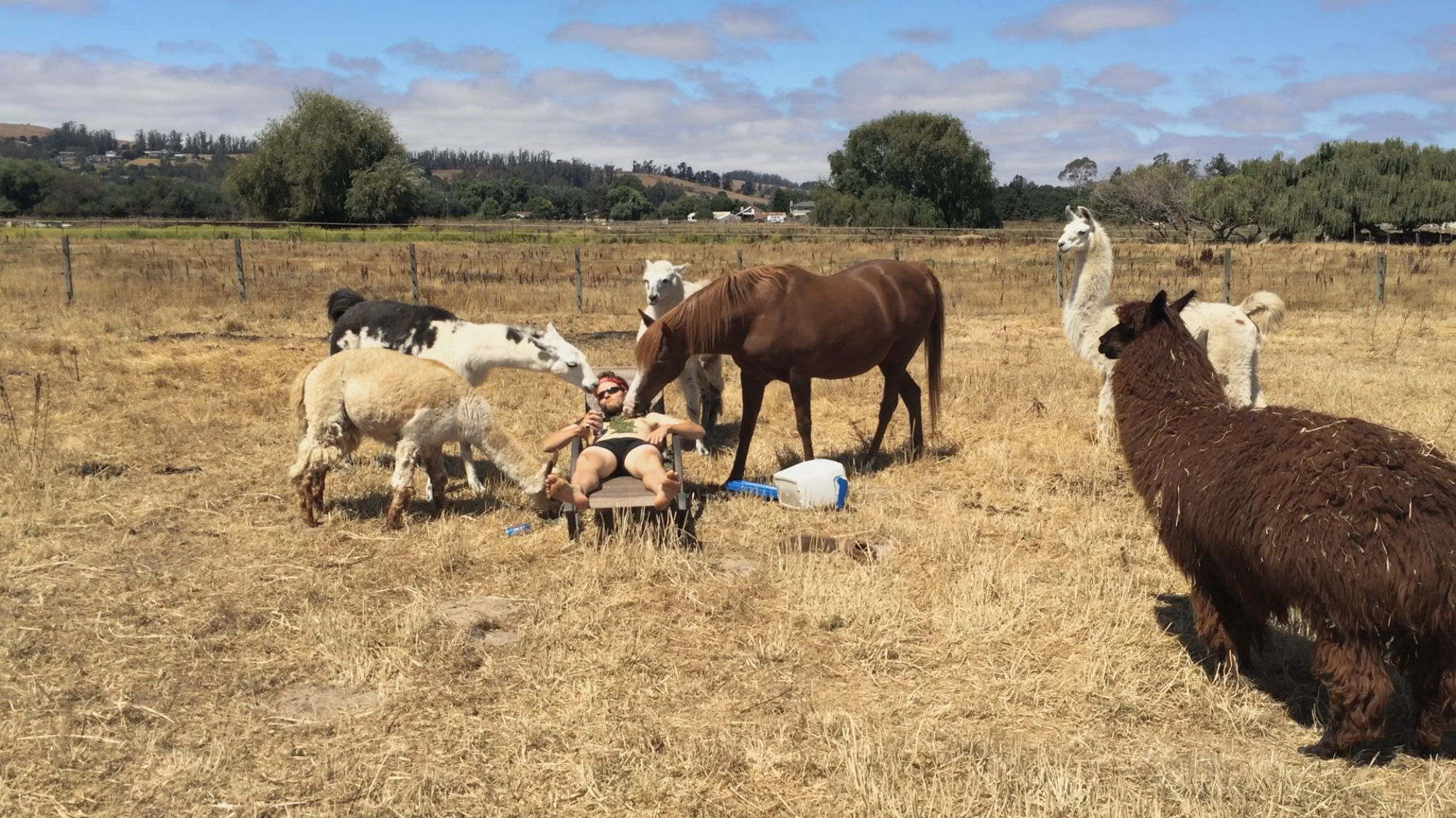 And how did you approach structuring the documentary from a narrative perspective?

I told the story chronologically, weaving together my story and Margie’s story in sections. In the second part of the film, our narratives begin to intertwine in vérité moments of both connection and conflict. While editing, I struggled to figure out who the protagonist was in the film. My producer and I decided that ultimately I was the protagonist, as I am the one who changed the most from the experience and it is through my perspective that the audience witnesses the story. This is why I started with my reflections at the beginning and end of the film. Even though she was not the protagonist, her influence on me was so integral to the story and I found her to be such an interesting person that I gave her near equal weight within the narrative.

Will your next project take as long in the filmmaking oven?

This Fall I shot a short personal documentary about a shared trauma that my childhood friend and I experienced while playing together when we were eight in a plant nursery on an old ranch in Sonoma Valley, California. This October I filmed us reuniting for the first time in 20 years and going back to the place where it happened. I am planning to have the film finished by this Summer, I think it’s going to be titled Skylark Nursery.