There’s an unsettling yet comedic sense of uncanny to Anthony Oberbeck’s short Book. It follows an idle man as he goes about his daily life being chastised by his family and employer. But through the discovery of an unusual book, the man finds a source of hope in an otherwise brutal world. Oberbeck cinematically reflects this doom-filled ambience through the use of a creeping zoom, drawing the attention of the viewer into this man’s eternal misery. It’s a succinct and unique short, clocking in at just under four minutes, but impressively manages to tap into that strange, and almost farcical nature, that utter misery can contain. DN joined Oberbeck for a chat about his short, where he revealed the motivations behind his creeping cinematic techniques in addition to the composition of the eery and distorted score that underpins his protagonist’s perpetual despondency.

Where did the idea for Book come from?

I used to do a lot of sketch comedy and live performance and Book is loosely based on a sketch I did live a couple times. The idea for the filmed version came all in one moment and I wrote the script more or less in one sitting after that.

So, it came together pretty quickly. Did production follow suit or was it more drawn out?

We shot it all in one long day, with an additional pick-up day for the shots in the book store. The ‘crew’ was just me and the DP Johnny Frohman. Locations were all favors called in from friends.

I really liked the use of static, zooming shots. It perfectly taps into to the sense of uncanny lurking in every frame. What was your approach to the cinematography?

Initially my idea, visually, was to use static shots framed in unconventional or off-kilter ways to emphasize how Joe is out of place in his world and to give the audience a slight feeling of unease. When I brought Johnny on to shoot he was excited to try using some long, slow zooms, for a similar effect. We shot on a Sony Fs7 and rented a Sony 18-110 lens. At some point we started using the zoom more than expected, and early on in the day made the choice to have every single shot zooming in or out. We had a little hesitation about over-using it but I figured shorts are your chance to experiment and see how far you can push different techniques, and this was going to be pretty stylized regardless, so we went for it.

What influenced the use of a repeating musical motif that accompanies these shots?

I realized early on that the footage we were getting was maybe not conducive to a typical narrative pace, no establishing shots for example, and so started approaching it more as a music video, or art film. That is a big part of what informed the choice to have the same music play constantly over the whole thing. I made the music on Ableton and leaned heavily on cranking distortion and warping effects until notes break down into that creeping staticky sound. Other than tension and eeriness, I think the constant music adds a sort of claustrophobia, a feeling of being trapped, blanketed by tension, that makes sense to me in the context of what this is about.

Shorts are your chance to experiment and see how far you can push different techniques.

Did you work on all aspects of the music and sound mix yourself?

Matt Giordano did the audio mix, and really upped the game of what the sound is doing for the whole thing. In the last ‘scene’ if you listen for it you’ll notice the sound of the train slow down and warp. He added touches like this that I wouldn’t have thought of or noticed on first listen that I think really add a lot subconsciously.

How did you approach casting for the film? The expression on the face of Joe throughout is amazing.

Everyone who appears in it is a friend, and they’re all very talented actors, but I will highlight Nathan Min (Joe) and Andrew Tisher (Boss). Nathan pushed the deadpan and the sort of shell-shocked look past what I’d been imagining and I think made the whole thing stranger and funnier than it would have otherwise been. Andrew Tisher is someone I’ve been working with for over a decade and I think is a master of playing characters that are simultaneously soulless and soulful, monstrous people who you almost empathize with because of how much pain is in their eyes.

How did you approach the cover design of the book?

I wanted the cover design of the book to be as mysterious and nondescript as possible, just a name and a face. The fact that there is no other information on it or synopsis on the back or anything, was borne partly out of convenience and also worked to make the book seem stranger and more mysterious. I also looked up a bunch of Tony Robbins and other self-help guru books, and this happens to be the general theme of their design, big cheesy portrait of the author on the front. The portrait of “Dave” is an old headshot of my friend Chris Bragg, a Chicago-based actor. 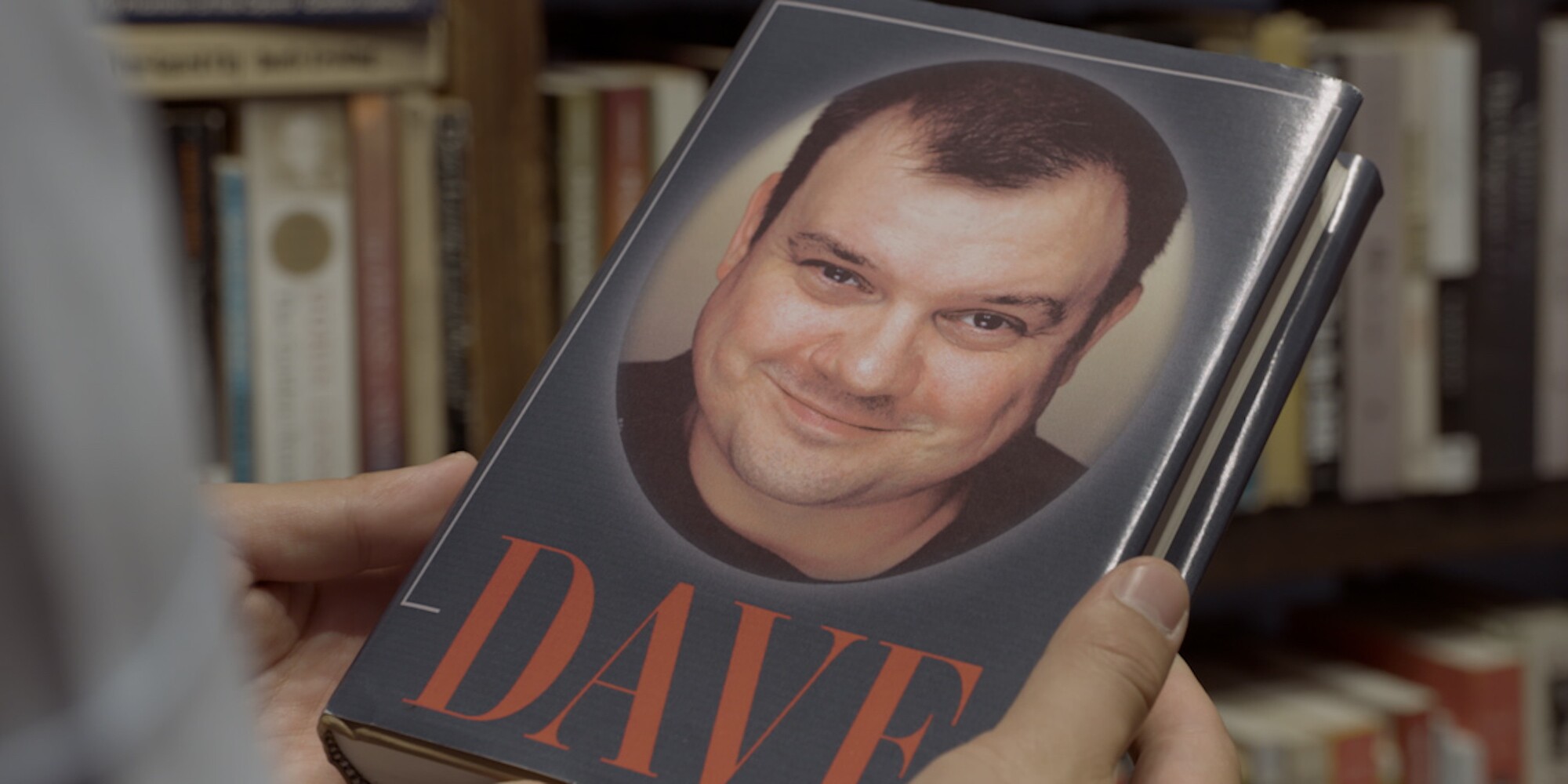 What inspired each scenario Joe goes through in the film?

For the scenes of Joe’s life I was just looking for three variations of him getting yelled at, that were general enough to make him a sort of every-person. The fact that it originally was a comedy sketch is probably why it’s structured as ‘three variations on the theme’. I think that sketch comedy structure still informs a lot of how I approach writing things, and my proclivity is still to structure scripts this way, playing with and heightening the same dynamic or idea over and over until it reaches a point where it can end on a different plane than it began on.

The constant music adds a sort of claustrophobia, a feeling of being trapped, blanketed by tension.

How do you think your experience making Book will go on to inform your next film?

Finishing Book and seeing it well-received has emboldened me to be less married to traditional plot structure or cinematic convention. It’s a good reminder that film can follow its own logic and communicate abstractly. It was also a good reminder to not let perfectionism get in the way of making things. I finished it in early 2020 and then sat on it for a year because I thought it wasn’t really up to par, and then happened to show it to my wife one night and she said, “What the fuck is wrong with you, this is great, just put it out”, and so I did and I’m glad I did.

Speaking of, what will you be working on next?

Last summer I shot a feature film called Dad and Step-Dad with a couple friends which hopefully will play at some festivals this year. And I’m about to start shooting a series of four shorts in a similar vein to Book, sad, deadpan people trapped in strange worlds.

Book is one of the many great projects shared with the Directors Notes Programmers through our submissions process. If you’d like to join them, submit your film.