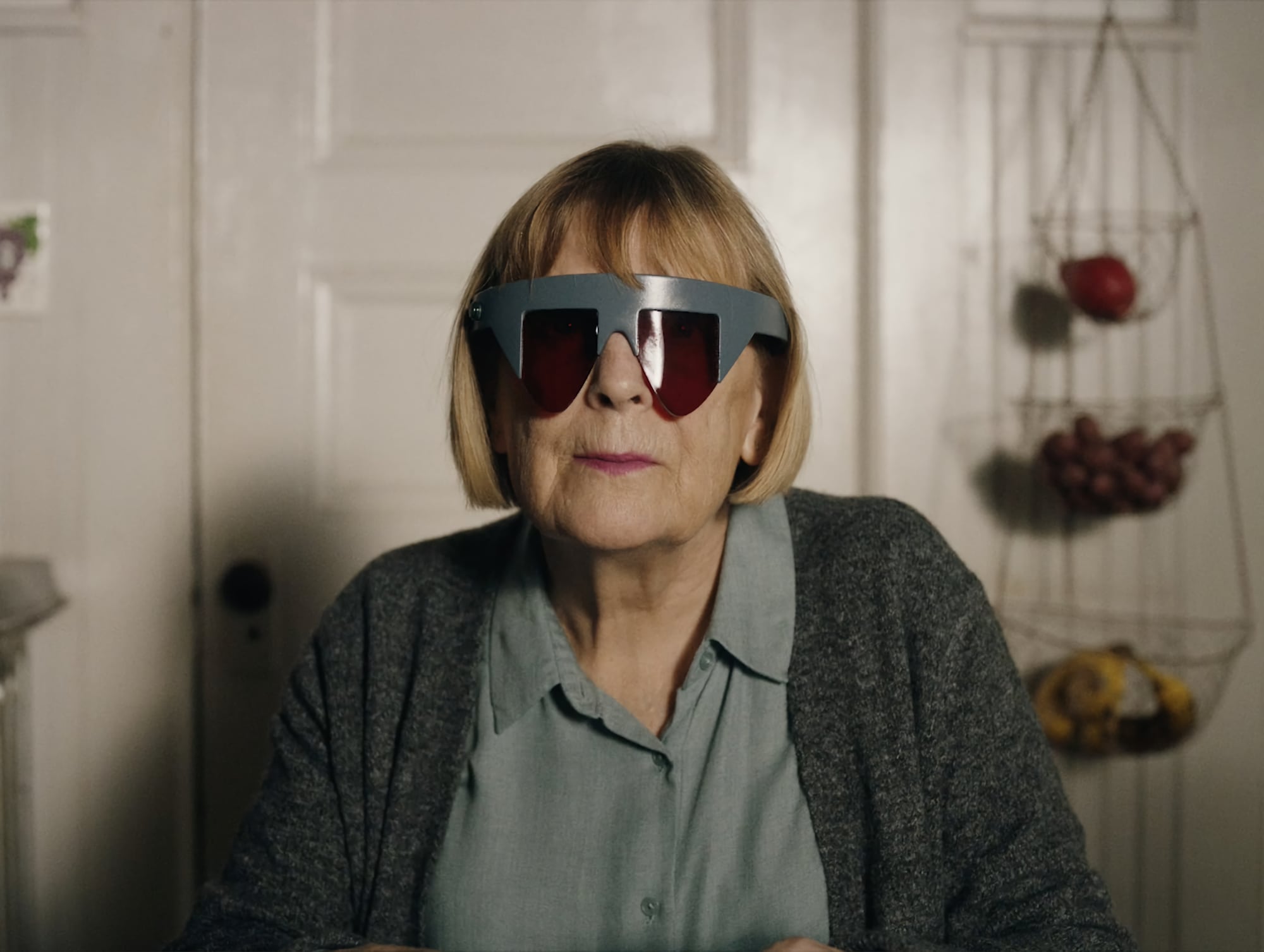 Never leaving her apartment, Helen is a bitterly lonely woman. Her only companion is a smart-home device, one which sounds friendly and personable, but never forgets to remind her to buy toilet paper. Then, one day, a shiny virtual reality device arrives, promising to bring back a long-lost relative in the flesh, as long as she keeps it on. Caught in an Academy Ratio format that stresses the cut-off nature of Helen’s life, Zachary Rubin’s Imaginary Friend is a sly, sardonic yet strangely touching work, testing the ethical and philosophical boundaries of human-virtual connection. Featuring no music, yet two finely balanced performances from both Cynthia Mace and Douglas Wann, the film avoids traditional conclusions in favour of something far more probing and enigmatic. DN had the chance to talk to Rubin about how he found the right voice through a chance meeting, the benefits of shooting in 4:3 and his views on the not-so-utopian future of virtual technology.

What immediately sprung to mind are these Alexa devices people have in their homes, which can mimic human emotion, but they’re not genuine. Was that an inspiration for the film? What else started you on this journey?

I was going through this emotional thing where a personal event with somebody had transpired, and I was trying to figure out how to mend that relationship, or whether I should just leave it alone and see what happens. Then I remembered when I was a kid. My parents would say: “Write a letter you would never send” to work out that emotional turmoil yourself. Then I thought: “What’s the version of that today?” I just started noticing how augmented and virtual reality is going in a direction where people are looking to interact with something that wasn’t real. And these things are becoming so much more personal; they know our habits. It’s easy to see people getting connected on an emotional level with something that is augmented. The idea was a very simple version of trying to reckon with something internally but using something external to help you work through that.

You previously worked as a camera assistant quite a lot before making this debut. Were you inspired by the idea that having worked for so long helping other people with cinematography, you finally wanted to try and do all the shooting, lighting and framing in your own way?

Totally. I was a camera assistant for about nine years before I made this short. That time is spent working with cinematographers and directors so closely. Observing people not just succeeding, but watching them fail and mess up. I was trying to understand how, when my time comes, I was going to handle these situations. But I’ve been on set for so long, I’m still a camera person. I’m like 11 years in the union. But I also had that feeling like in Five Feet From Stardom I was so close to the thing I wanted to do. I think there just became a point where it kind of popped and I was like: “I have to take this opportunity now or I’m gonna assist forever.” 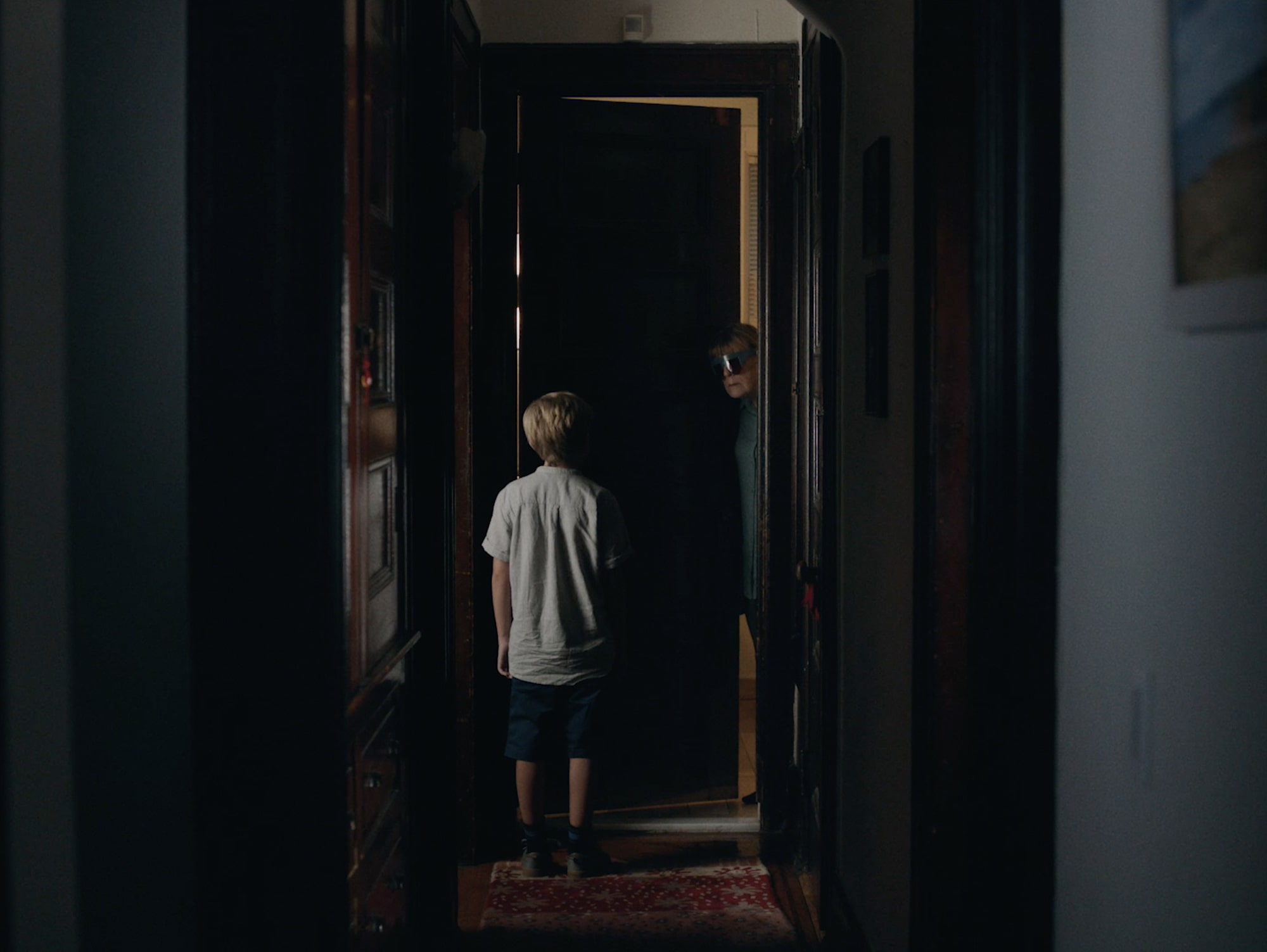 It’s interesting, in terms of camerawork that one of the most crucial moments — where she abuses the virtual child — occurs off screen…

A lot of the filmmakers I like have this idea that you only show what you have to show. I think a lot of great filmmaking is not what you show, but allowing the imagination to fill in the blanks that the film is leaving for you. For a moment I considered: “How are we going to shoot this?” But ultimately, I thought, to really make this thing land, and especially because it’s a very sensitive moment in the film: just having the sound and allowing people to conceive of what this image looks like in their head would be more horrific and real than anything we could’ve shot. On top of that, we have a vantage point with the camera that we’re sort of seeing through her perspective because even though it’s third person, in the room and the reality of what’s going on in the story, there’s no one there. I thought that shooting this off-camera would really emphasise that part of the movie and remind people, that even though there’s no one in this room, the emotional event is still taking place.

I think a lot of great filmmaking is not what you show, but allowing the imagination to fill in the blanks that the film is leaving for you.

Can you tell me more about the actual voice you got for the initial machine. What kind of tone were you looking for there?

I was thinking: “What are we going to do for the voice?” I didn’t have something specific in mind. I was living in New York, maybe a month away from production, and I was just taking a stroll in Central Park. I started talking to some dude with his dog in the park, and he had the most amazing voice! I was like: “Hey man, I hope you don’t take this the wrong way. But I think you have a great voice. Do you do voice acting?” He’s a teacher, and he did a little voice acting, but teaching was his main gig. I was like: “Dude, I’m doing this movie. I would love for you to be a part of it.” Without that, I think I don’t know what this voice would’ve sounded like and we probably would have been casting for a while to get it right. There’s no augmentation there. That was all him. 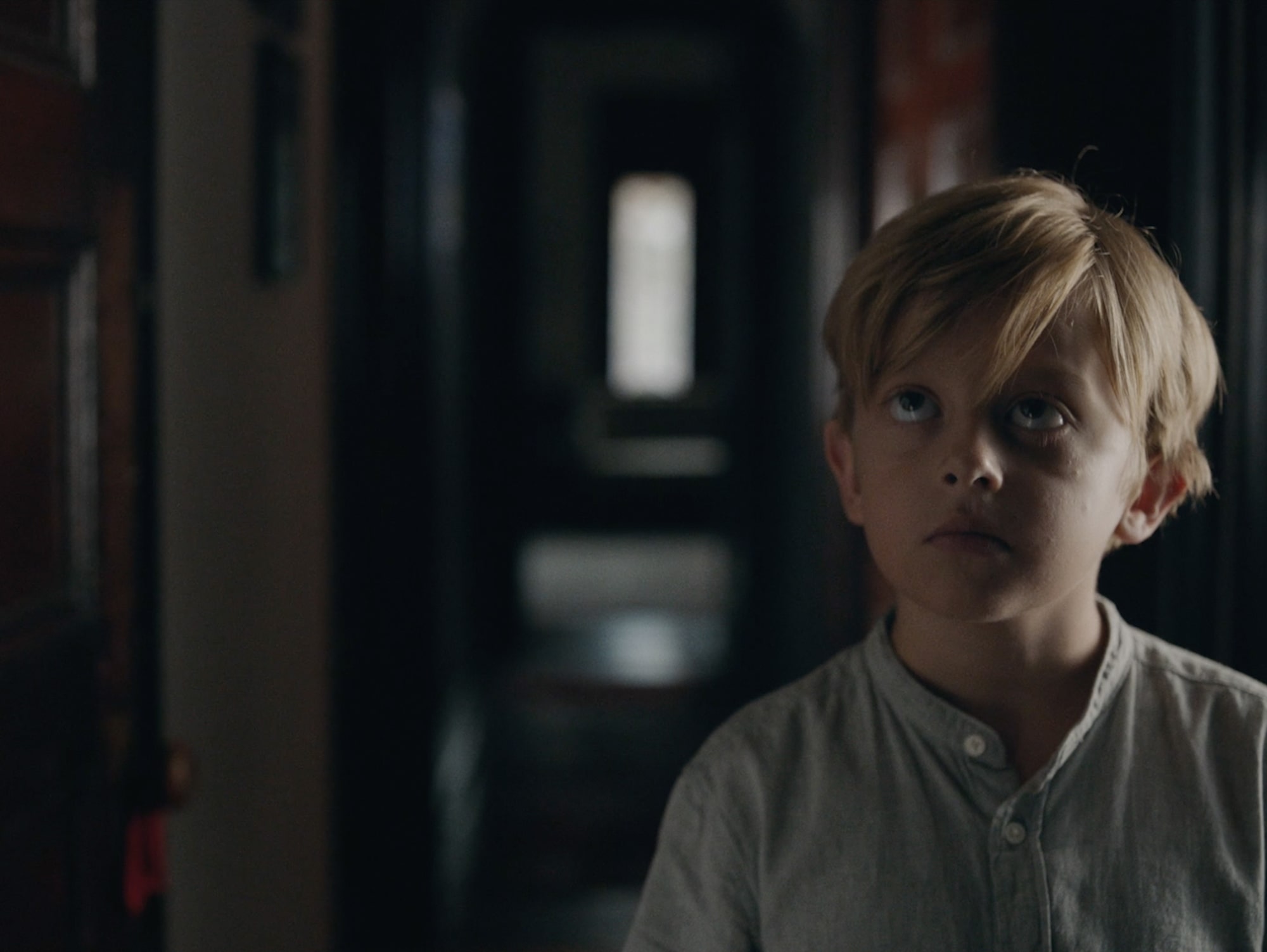 I’d love to know more about casting the other two actors. What I found interesting is that the kid has to play emotionless as he is a virtual thing, but the woman herself has been lonely for so long, she also seems rather remote… What was it like trying to create this relationship?

Her name is Cynthia Mace. I’ll just say this: a lot of the success for the casting and the technical stuff was really down to spending so much time as a camera assistant and meeting technical crew and actors and everybody who wanted to step off-set from a big TV show like this. Casting her was actually through a friend of mine who is an actor. I just emailed her and told her who I was looking for and she connected me with this woman, Cynthia, and she was great. We did a read-through and I just couldn’t find anyone better.

I started talking to some dude with his dog in the park, and he had the most amazing voice!

The kid was a tougher one. We did a lot of casting for that; cold calls, and online posts. We saw like 20-plus kids before Douglas Wann showed up. Like you said, the role is lacking in emotion so trying to reel a kid actor back a little bit is tough, but he took direction so well. We got so lucky by finding him.

With the Academy Ratio, you really help to create this claustrophobic feeling that there’s not much possibility for her in the outside world. Why did you want to use this frame?

Definitely trying to emphasise this feeling. But also, the movie is set in the near future or this like alternate reality. I wanted the camera that we were using to feel like it was decades behind where we are now. So we use the Academy Ratio, but we also don’t have any camera movement in the short. I thought it would be fun to make a movie about the near future but using technology that felt very stilted compared to the era it’s supposed to take place in. 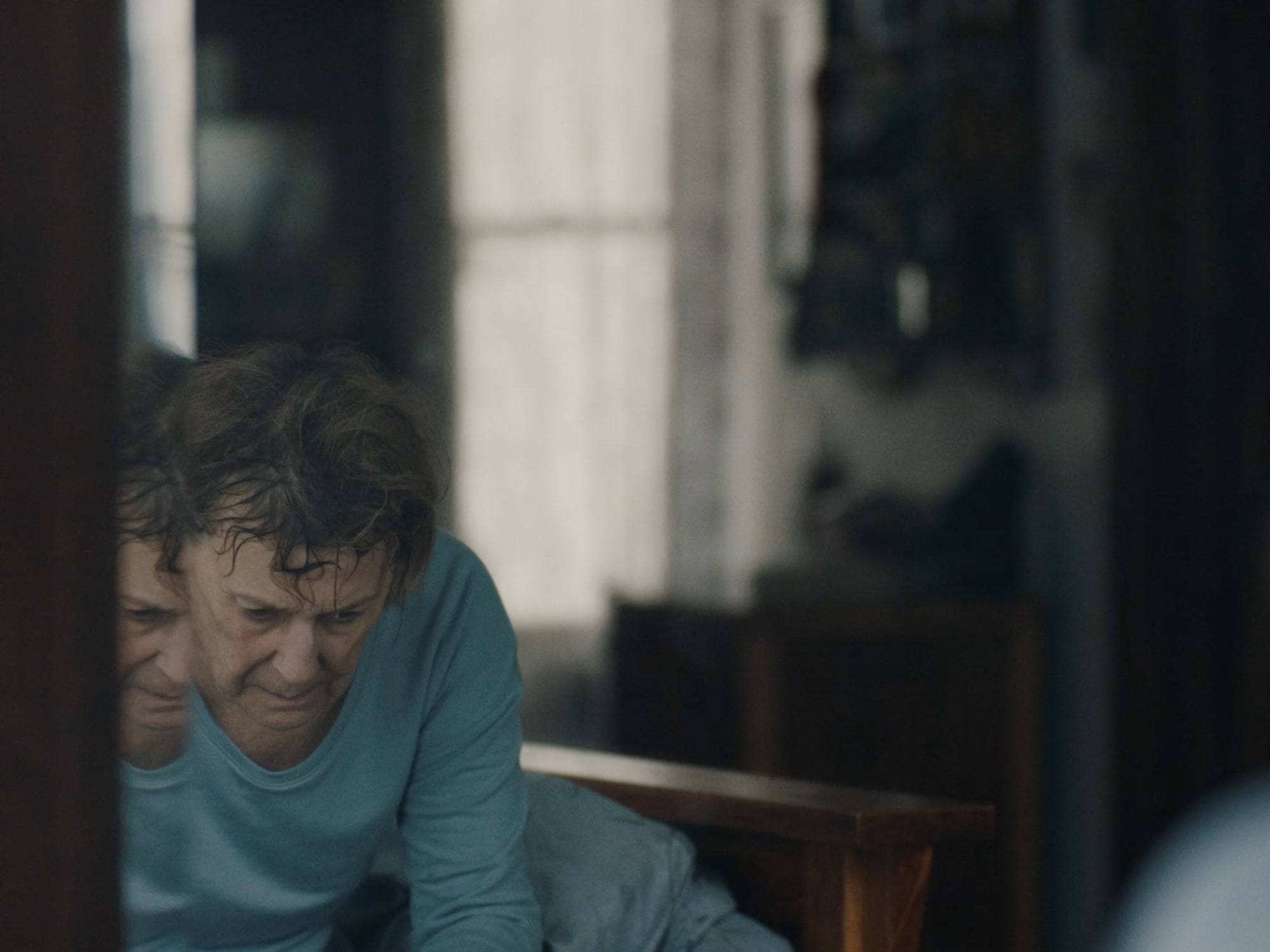 What I think the film articulated very well is that despite the utopian ideas people have for the future, for example with the Metaverse, these will probably just be used to sell more ads. You use this as a slight comic element. Are you optimistic about the future?

I don’t know, but I think it’s all about money. I think that if this sort of system were to be integrated into our lives, I think that instead of it being so apparent, like watching a TV show and then the commercial comes up, it would be more subtle, like “Oh, I’ve noticed you need some toilet paper, I can order that for you easily.” Or just noticing someone’s habits and commenting on them. It won’t be like a commercial for Buffalo wings while you’re in the bathtub.

I wanted the camera that we were using to feel like it was decades behind where we are now.

I have a short that’s finished. It’s sort of in a similar vein, in the near future or some alternate reality. We finished everything like three months ago and are hoping to premiere at a festival this spring or early summer. After that I’m writing a feature and hopefully, I can figure that out in the next year or two. It’s a lot of writing. Then I’m just trying to keep shooting stuff and earning a living. I’m still in the union and do a lot of TV shows.