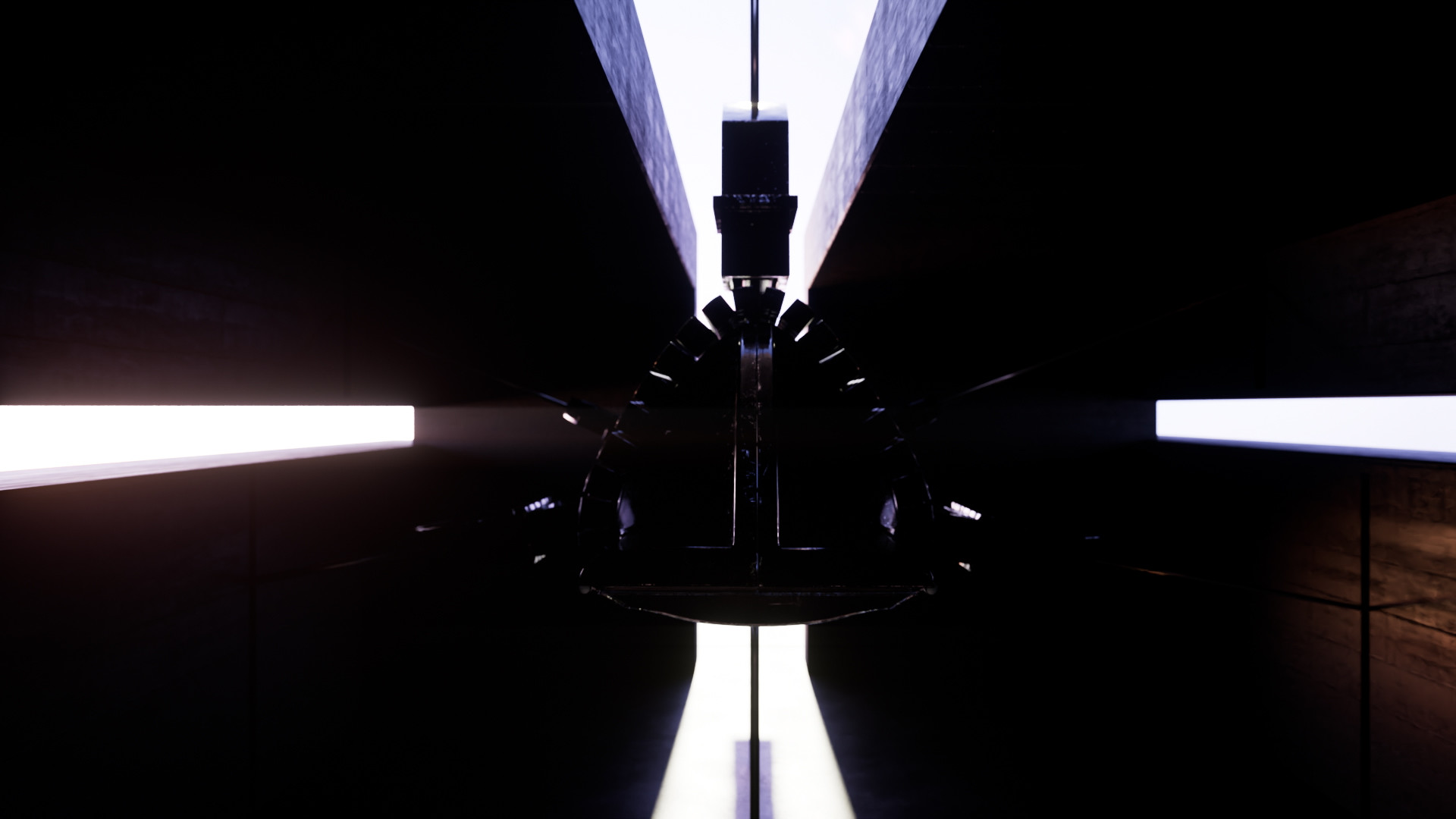 Traditional images of ocean waste are all over the news, whether it’s rubbish filling otherwise beautiful beaches, seagulls and fish caught in plastic rings or the slow degradation of the coral reef. While these images can be distressing, the question lingers over their effectiveness, as so little seems to have been achieved when it comes to stopping the impact of our actions upon the environment. Yorkshire-born, Australia-based filmmaker Simon Robson (last seen on DN here) tries a radically different tack with Ghost in the Machine, envisioning the ocean itself as a kind of living, breathing artificial machine, slowly choking to death as a result of plastic pollution. The result is a provocative and haunting portrait of the way mankind has mistreated the ocean, completely made with computer-generated imagery. Robson joins us today to dig deep into the animation tools used to create Ghost in the Machine, his desire to create a brutalist, alien feel and the need for telling dark, nihilist stories about the future of the planet.

You are a surfer yourself, was plastic pollution something that you witnessed firsthand?

Absolutely. Australians are very lucky in that, by and large, the marine environment is taken care of quite well. My biggest encounter with ocean plastics was when surfing in Indonesia and also in Fiji. Much less wealthy countries aren’t able to put more time into ocean conservation. Many times I’ve been paddling into the surf and scooped up handfuls of plastic. It’s a really odd feeling. When you’re on a surfboard, you feel kind of vulnerable, because there are stinging and biting things that you want to avoid.

Without wanting to sound new agey, you can’t help but release stress when you paddle out into the surf, but then you’re scooping up this kind of alien plastic entity that shouldn’t be there. I just feel in terms of ocean species and ocean life, what we’re handing down to our kids really gets to me.

If I did an organic animal, it would’ve been straying into that well-trodden territory.

I’d like to pick up on that alien feel. Was this something you wanted to translate to the film itself?

I’ve always gravitated towards brutalism and machines. When I started playing with ideas for the film, I kind of linked into this idea that for most of the time since the industrial revolution, I think that mankind, up until very recently, has seen the natural environment and the oceans as this limitless resource to chuck stuff into that’s no longer required. It’s always kind of given me this idea of a trash can. So actually, underneath all of the scales and whatnot on the fish, is this kind of long metal can. I started with that and then started to populate it with stuff. 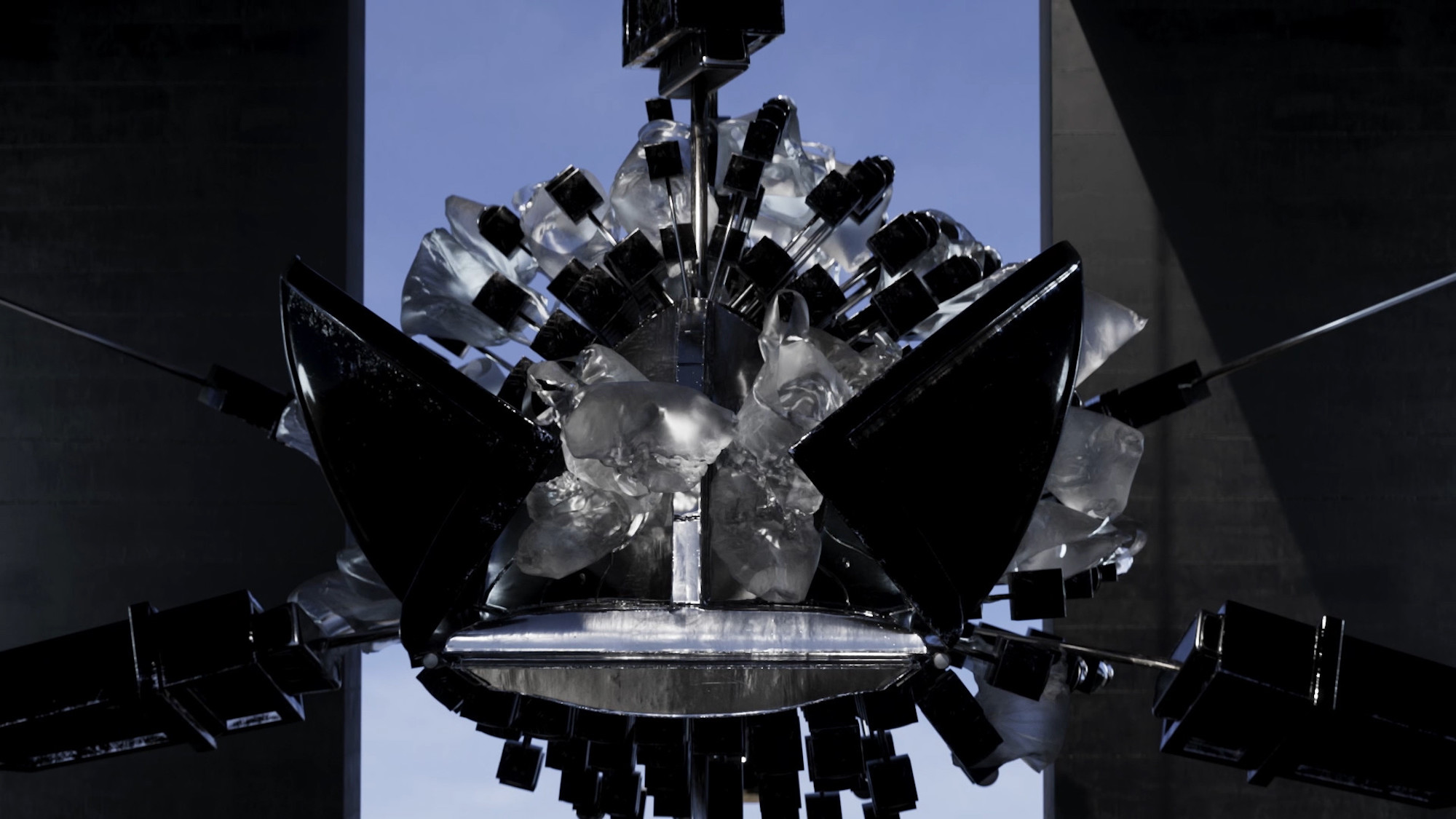 On the one hand you’ve got the idea of the brutalist trashcan, and then on the other hand, there’s nature’s intricate machine and we’re clogging it up. By having plastic going into a machine and getting trapped and seizing it up, it was visually a more obvious ‘get’ than doing something more organic. Of course, we see images of fish in plastic bags or seagulls on the beach with plastic coming out of their stomachs. Those things are horrific but they’ve become a bit ubiquitous. My background’s in advertising, so I’ve always wanted to find ways of telling stories that are aesthetically apart from what’s there. So if I did an organic animal, it would’ve been straying into that well-trodden territory.

Was this practically-made or a CGI creation?

It’s completely CGI. I’m a bit all over the place, I work as an onset director when I am required to do so. I’ll also work as a VFX supervisor/director, so I oversee post-production. But I’ve always been hands-on with 3D and compositing software and rendering software. So this was just really a labour of love across two years of picking it up and putting it down. Because on the one hand, it’s a very simple narrative, it’s something beautiful coming to life. But then on the other hand, the shot-making is really important in something this simple. It’s just me apart from the audio, which was done by Gavin Little, aka Echolabs, an old collaborator of mine and an absolute genius. I was very lucky to get him, I couldn’t believe it when he said yes.

The shot-making is really important in something this simple.

Walk me through the technical specs. What were the challenges in rendering and compositing?

The main digital workstation was Cinema 4D. Then I really like the look of OctaneRender by Otoy, which is a plug-in renderer for Cinema 4D. I used that in conjunction with Substance Painter to make all the materials look physical. I actually spent a lot of time out of CGI midway through my career when I felt that renders weren’t doing what I wanted them to. It was only in the last five or six years that I came back. There are lots of other great renders but Octane is what I use. Then for the plastic bag situations, I use something called Marvelous Designer, which I mainly used for fashion. It’s very good for fabrics and things like that. Then compositing and grading were completely in Adobe After Effects.

The challenges rendering with Octane are getting the frames to a good high-definition size, and to look good enough in animation, as opposed to being still. So even though the technology has moved on a lot, you still have to throw a lot of samples at each frame, which means asking the machine to concentrate a lot. I was doing a lot of overnight renders in an old-school way. You may have heard about the huge leaps and bounds that Unreal Engine are making into production with the gaming engine. That almost dispenses with rendering so that’s where I’m going next. The other challenge was stability. I don’t think anyone who uses Octane would claim it’s a stable renderer. It crashes a lot, especially as the scenes and the textures get big. It’s the old thing where you constantly want a faster machine.

I actually spent a lot of time out of CGI midway through my career when I felt that renders weren’t doing what I wanted them to.

You mentioned handing down the world to kids earlier. But if you showed this film to a child, they’d probably get quite upset. Are you worried it’s too bleak or do you need to ring the alarm bells?

It actually makes me sad to think about it. It makes me go “gosh”. I think sometimes you need a dark ending on something to not leave people with a smile. But I do believe in the ingenuity of human beings and goodness knows what might be conjured up in the future to draw down carbon from the atmosphere. I don’t have a neat way of summing it up. To be honest, it just ended where it ended. I got to stand by that.

You might have heard that a couple of years ago, during the bush fires in Australia, there were intense heat waves in Darwin where bat populations were falling out of the sky. Really apocalyptic imagery. I saw footage and was like “holy crap”. This is really something out of Icarus. I think I’ll keep the environmental tip here. I tend to push things if there’s an environmental message. It tends to be my sweet spot really.