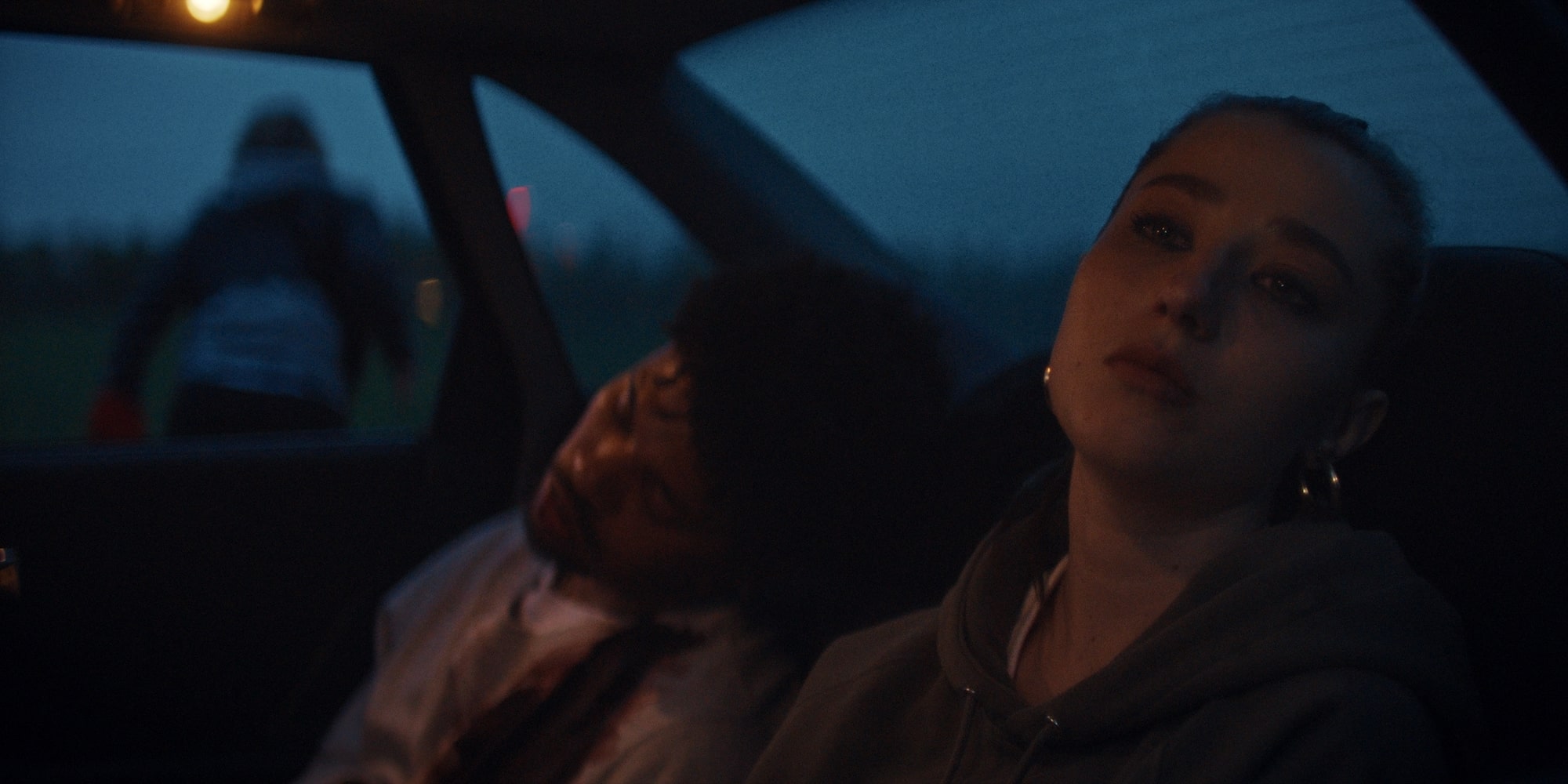 The camera bobs, weaves, floats and ducks, tracks, speeds up and slows down with ease; never resting throughout the entire runtime of Ben Galster‘s mesmeric one-shot music video Kugelsicher, created for pop artist Marie Bothmer. Shot entirely in the twilight period on the border between Berlin and the state of Brandenburg, Galster immediately plunges us into the aftermath of a violent, life-threatening scene, with characters caught in a moral quandary that offers no easy solutions. The result is a flowing, gripping music video with a surfeit of style; an immersive experience that brings to mind both Sebastian Schipper’s Victoria and the post-robbery feel of Reservoir Dogs. DN had the chance to talk to the Berlin-based director about the technical challenges of the shoot, finding the perfect location, working with an open brief, and getting the right vintage lenses to capture both foreground and background at the same time.

How did you first get in contact with Marie?

We previously shot a music video together. A friend of mine is her manager who introduced us and thought we might be a good fit. I always look for musicians I can collaborate, form a longer relationship and establish a visual identity with, rather than just doing a one-off music video and then moving on to a different artist.

I wrote character outlines and character descriptions for each character, and sort of roughly explained what the scenario could be.

Was it an open brief and where did you get the initial inspiration from?

It’s the rare occasion where they let me do what I want. On a personal note, I used to do quite a bit of advertising, then the pandemic hit most directors quite hard, and I realised it was an opportunity to do more work which is more ‘you’. I wanted to tell a story that feels very real, which is sort of constructed like a miniature film. Having had a good experience with Marie in the previous video, I was able to explain the idea and she let me go with it. 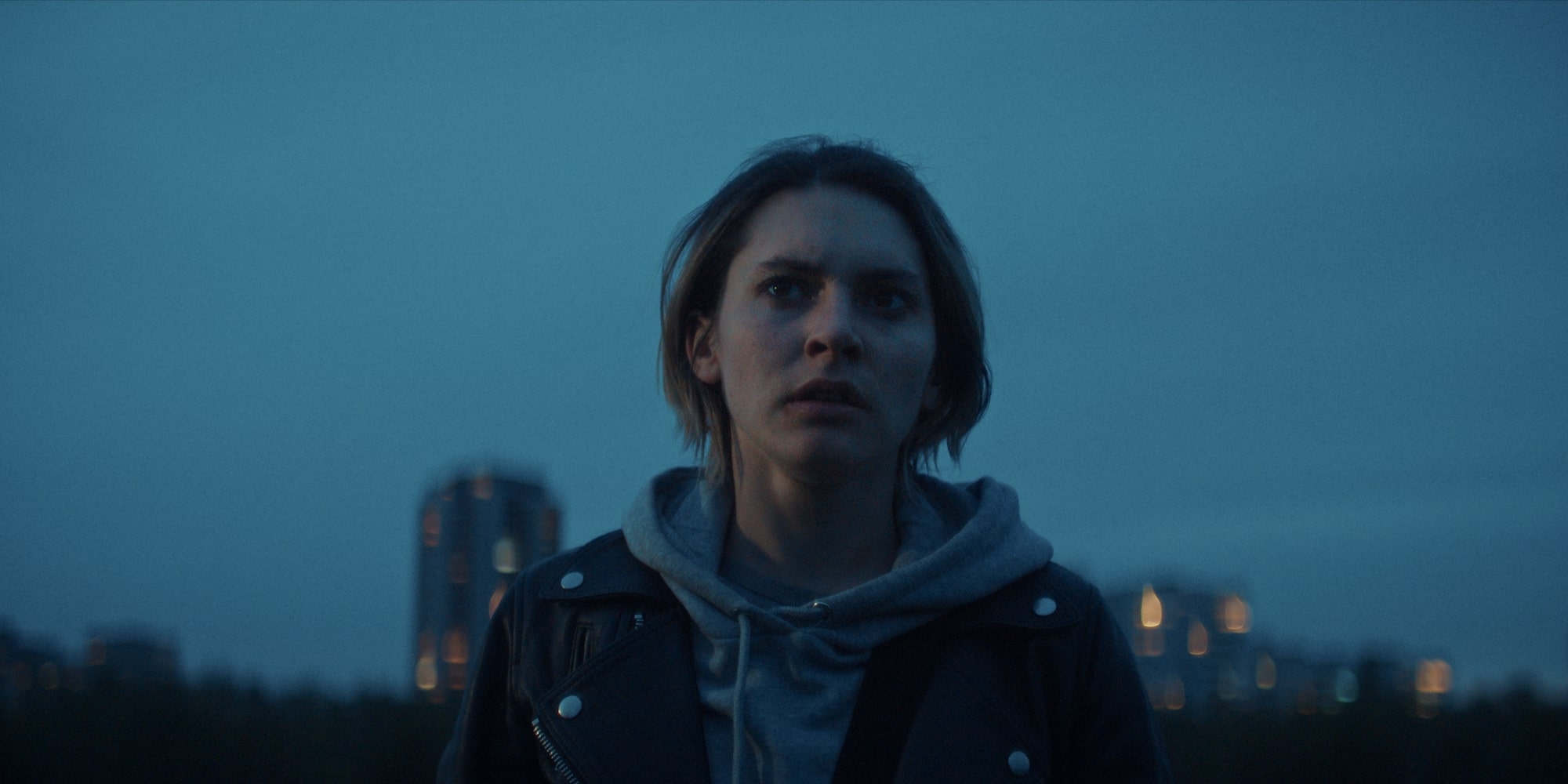 I imagined it’s just after an armed robbery. It kind of reminded me of Reservoir Dogs where you only see the aftermath. Did you create a backstory for the film?

The deal was that I didn’t want them to be robbers. I thought it was nicer to have them, let’s say, play a prank. And I wrote character outlines and character descriptions for each character, and sort of roughly explained what the scenario could be. But the interesting thing was that we didn’t actually decide on a scenario until shortly before we shot on the day. I think the problem was that when I spoke to the DOP, we block the action for like two thirds of the day, and you’ve got to be very careful that the performances stay fresh and you don’t burn out the Steadicam operator, who has to do basically more or less the same thing for the whole day. So I thought it was best to come up with a story with the actors just before we actually went into the takes.

I always look for musicians I can collaborate, form a longer relationship and establish a visual identity with.

As it’s shot in Berlin and because it’s one take, I was wondering if Victoria was an influence at all? Although Victoria is more handheld and crazy while your film has more of a flowing style…

Yeah absolutely. It wasn’t so much an influence on the technical execution but more on the style. The idea was that you get sucked into it and it unfolds in a very organic way. I think if we would’ve shot it in a conventional way, it would have lost the sort of realness that Victoria has, where you don’t think about it, but it just takes you along. I think part of it is all in the staging, because when the camera comes down, the actress steps aside, just to reveal the car, which we don’t see before, and then the actor at the front of the car, he covers the other actor. The idea was to make sure all the camera movement was motivated by the action that is actually happening. 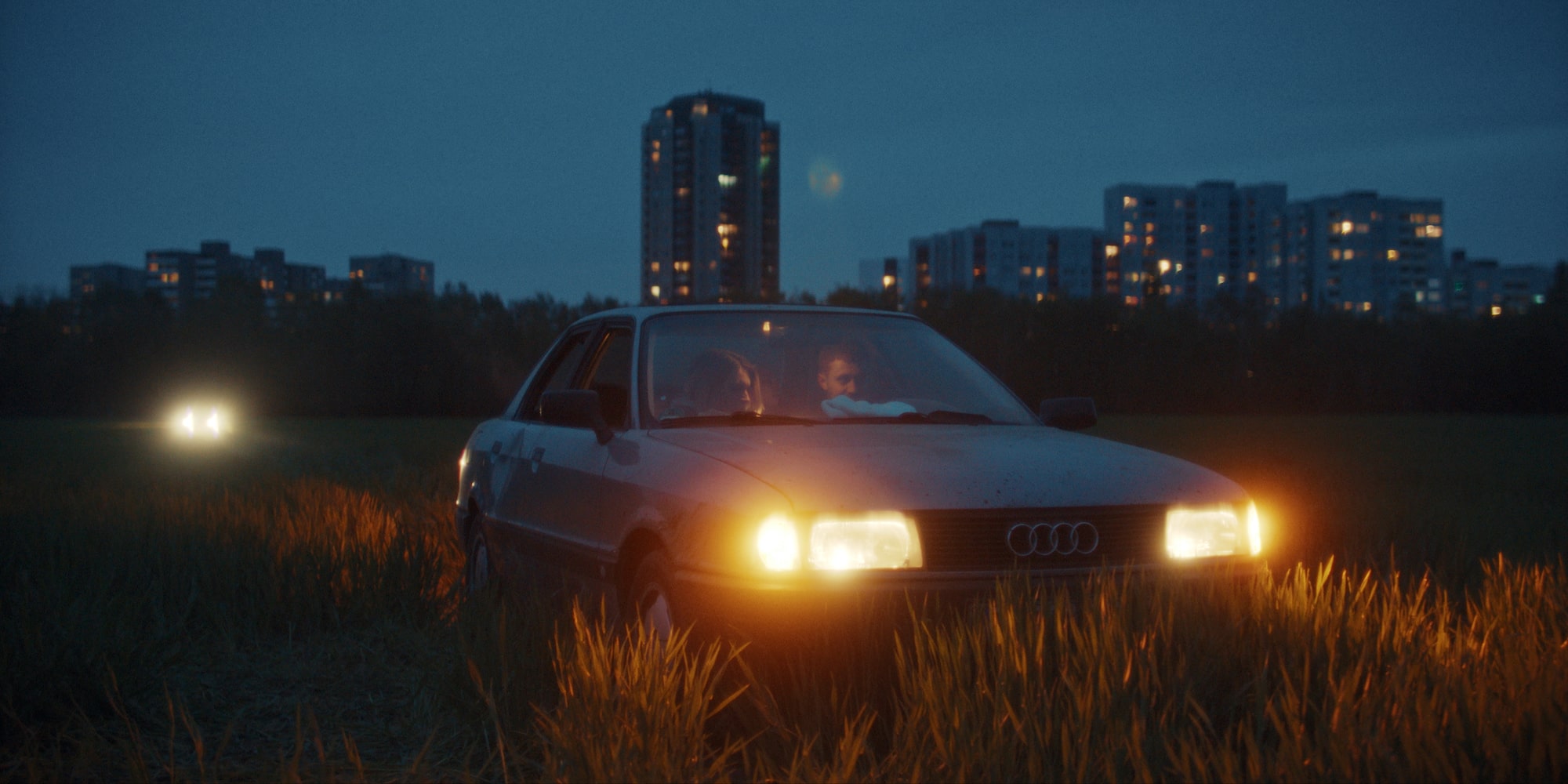 And what was the technical challenge of executing the shot? What equipment did you use?

We shot on an Alexa Mini. The lenses were vintage Mini Hawks, which were a deliberate choice because we wanted to have an anamorphic feel but the problem with anamorphic lenses is that you don’t get as close as you want to. The advantage of these lenses is they look anamorphic, but they give you a close focus range. So we managed to get quite close to them in the end.

The idea was that you get sucked into it and it unfolds in a very organic way.

Yes, because you have these wides to open with and the scenery in the background and you also manage to get quite close to them in the car. I was also wondering if you had to speed up or speed down any particular movements?

I initially thought about it, and that it would be quite interesting. But then I thought it would be contrived in a way because it takes you out of this realness. I remember when I was a student, there was this Tarkovsky book about time; although this is a music video, it plays out in real time so there’s nothing left out or edited in any way. 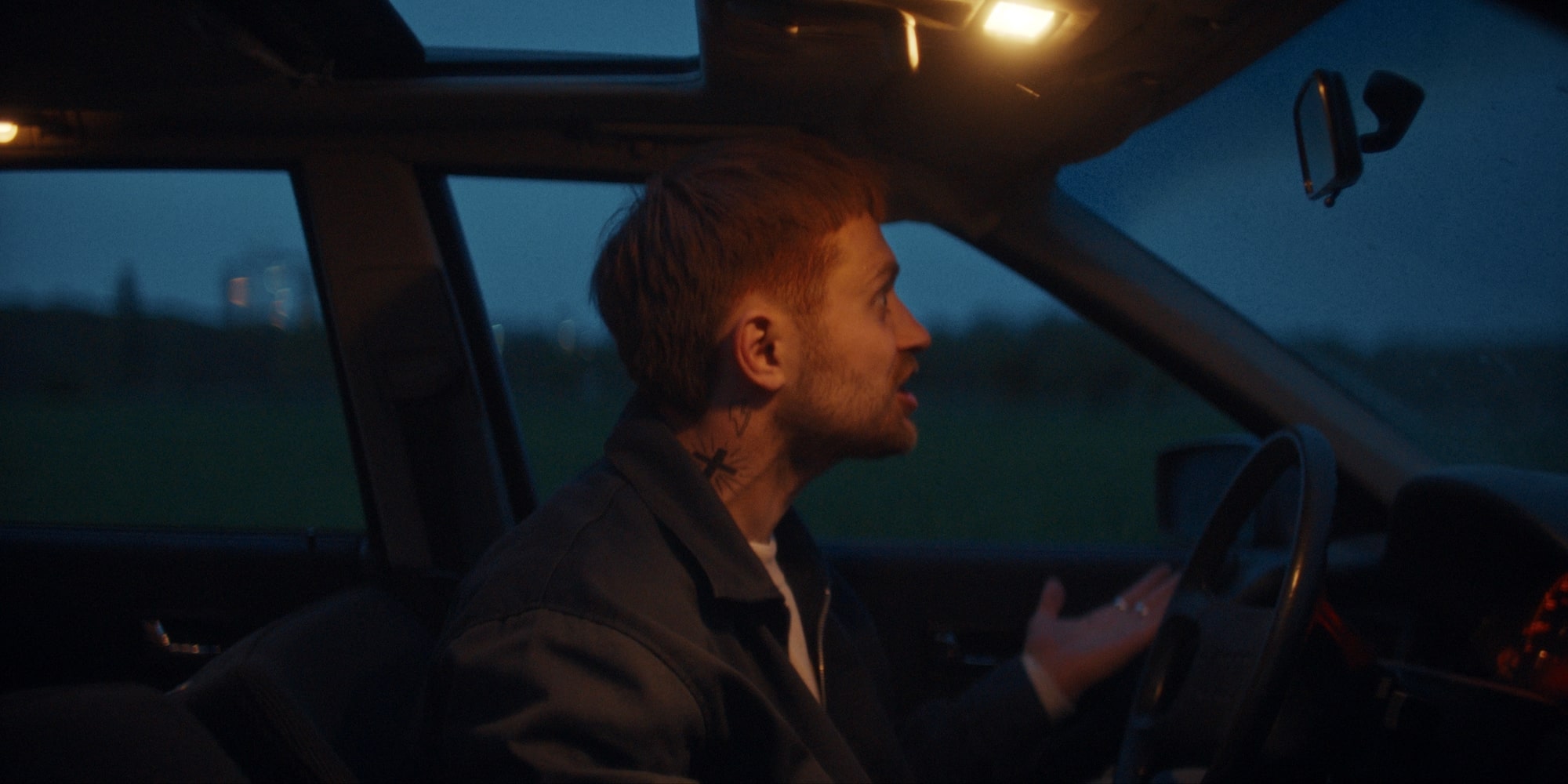 I’d love to learn more about the location. It looks like somewhere in East Berlin, maybe Neukölln or Friedrichshain…

It’s quite famous. It’s Gropiusstadt. I was looking for a place that has a utopian feel, like High-Rise had. Berliners know where it is because it’s by a famous architect, but it’s actually a bit rundown and has the biggest block of flats in Europe, which you see in the background. There weren’t that many choices where we could actually do that because we had a tiny budget and the project is quite ambitious in a technical way because we go in and out in one take.

We needed the sun to be in the right place at the right time because we see everything in the car, and there is no way for us to put lights in or fake it. Very early on the option was going straight or going from both sides. I wanted the drama to tighten as the song continues, so we are on a close-up at the end. The problem was that we had a viewing field which is 210 degrees, so we needed a spot that was perfect for the light, and revealed the right amount of surroundings. It’s funny because it was my first choice, and it was the perfect one that met all the requirements that we needed to do in the right way.

How long did you have to capture the late evening light?

I would say 25 minutes. We had basically one trial for takes and that was it. Then it was gone.

I’m going to Warsaw on Monday to shoot a small documentary about a queer photographer there. That’s around five minutes long. I’m also pitching a web series which I’ve written with two friends of mine. I hope it comes off. It’s in the second funding round now with ARD. It’s about a paid actress who becomes a fortune teller to her friends. It’s now six episodes at twenty minutes each. I hope it goes well. I’m quite happy at the moment to take a step back and do more storytelling again.