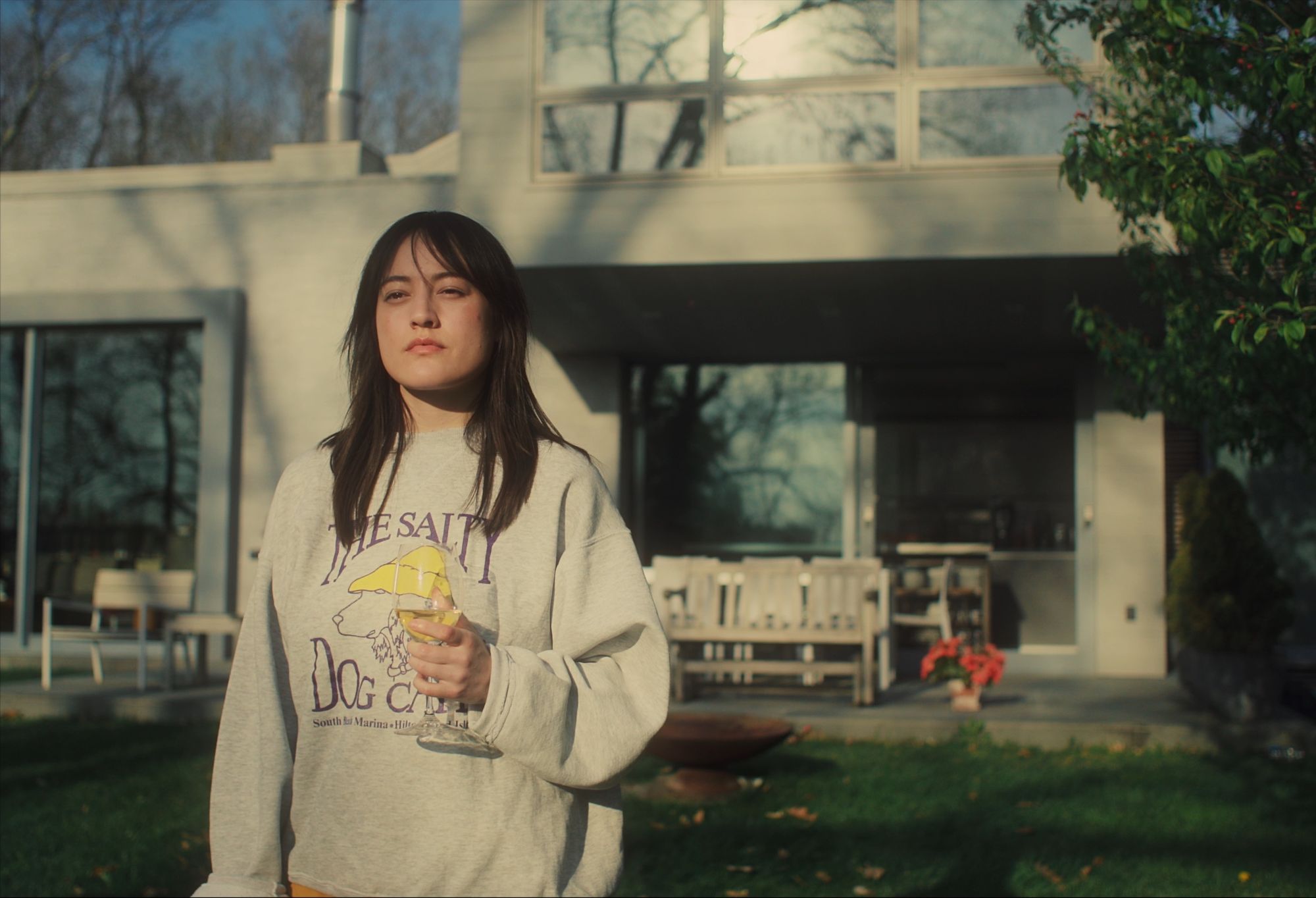 While some mastered the art of crochet and others became leaders of sourdough, filmmaker Katie Colosimo instead tuned into an awareness of building tensions and absurd behaviours between people brought on by innumerable lockdowns. In the writing and creation of Something You’ve Never Told Me Colosimo took those observations on friendships, relationships and the pure petty and stubborn nature of humans, and brought them all together into an entertainingly wry short film. We follow what should be a chilled, reconciling getaway for a pair of twenty-something long-time friends but that in actuality plays out in painfully awkward yet entirely relatable ways, with miscommunication and stubbornness taking centre stage. It’s a film which many of us will be able to relate to and perhaps more worryingly, see a reflection of our own abrasive behaviours within. We invited the Brooklyn-based director to tell us about her methods for crafting narratives with flowing dialogue, finding a cast that shared her comic sensibilities and how she revealed the flow of friendship tensions through the film’s score.

Was the writing of Something You’ve Never Told Me all drawn from personal experience?

The idea for this film came from some observations I made during the lockdown period of the pandemic where everyone was trapped inside with their roommates, families or significant others, etc. I was thinking about these small exchanges of passive aggressiveness between people who are close that can often surface when there’s some sort of underlying tension, even if it’s as simple as being stuck together inside. I soon realized that reflecting on these moments made me laugh because they were so ridiculous and usually, in reality, both parties didn’t actually care about the issue at hand, they just wanted to be right, one up the other or indicate that something is wrong in a ridiculous, roundabout way. There was something very funny but also kind of sad and vulnerable about this. While all of the interactions I witnessed/experienced were mild and usually laughed about later, I thought it would be fun to take this sentiment to the extreme and make it really absurd, which I then incorporated into Frances and Eliza’s back story, relationship and contained situation.

Apart from these witnessed interactions, what and who else do you draw inspiration from in your writing and filmmaking?

I really like Éric Rohmer films and the emphasis they put on just having an interesting conversation. His movies are philosophical and funny in a very understated way that resonates with me. I always admired the way he could make a film’s setting feel so real and compelling. I also really like Ruben Ostlund’s films and the way he highlights the ridiculous nature of being a human in a really hilarious way. Outside of film, I’m always drawing inspiration from music. I gravitate toward films that make good use of their score and just generally use sound to enhance the visuals. I don’t think this is really something I’ve had the budget or time to explore so much but I’m also fascinated by the specific use of food and drink in film and how it adds to the set design, tone and characters.

How did you go about the writing of the script as it is so dialogue heavy which can be challenging?

I think I just went about it instinctively since I was very new to writing. For some reason, this script came pretty fast and easy but generally I find the writing process to be really demanding. What helped me the most was reading it out loud and making sure nothing sounded weird, asking for lots of honest feedback, and not worrying about getting rid of or changing anything that even slightly felt off or like it didn’t work. The dialogue comes pretty naturally when I’m writing, it’s usually the plot and story that take the most brain power for me. I think as long as I set myself up with interesting situations and characters I usually end up writing too much dialogue that needs to be scaled down. I also tend to write in a pretty conversational and casual tone so it’s easy to imagine what it will sound like and tweak from there during the writing process.

I thought it would be fun to take this sentiment to the extreme and make it really absurd.

How did you find your trio of performers and what did you ask for in auditions and see from them at that stage that let you know they were right for their roles and most importantly what about the performances from Hannah Marianetti, Chynna Walker and Casey Worthington made you choose them for the roles?

I started by asking for self-tapes from everyone. One light, comedic scene and one more serious to see who really got the tone of the film. From there I narrowed it down and had zoom auditions, sometimes together with other actors to gauge their chemistry. I actually found Hannah Marianetti, who plays Frances, randomly while scrolling through Backstage and when I watched her reel, I immediately felt she would be right for the part. She had a mix of charming deadpan performances and this one really strong dramatic crying scene that convinced me pretty quickly.

When we cast Chynna Walker as Eliza, I knew she was really good but she managed to surprise me more and more with every scene we shot. She could make any topic of conversation funny in the most effortless way and is really skilled at subtly showing pain through humor. I actually really struggled to cast the right Gator and I remember feeling so relieved when Casey Worthington’s tape came in because he nailed it, I don’t think we even did an audition. He’s such a funny person and actor and I knew he would complement Hannah and Chynna really nicely. I think one of the main things that drew me to Hannah, Chynna and Casey is that they all had the ability to be confidently funny in a very toned down, sometimes low energy way.

When I started editing I actually cut with a bunch of placeholder tracks that I felt would build tension in the right places and developed an initial framework doing that.

The film’s grade made me feel like it could be set in the South of France or somewhere similar – how did you go about working with Andrew Ceen your colorist to create that vibe?

I sent him some reference photos from films I liked the look of and asked if it was possible to make something inspired by French Impressionist paintings despite it being so digital. I think he did an amazing job at making the look really unique and a lot of the setups do look like paintings to me! Also thanks to David Quateman our DP and Luke Carquillat our gaffer. I hoped that this film would sort of be a mix of modern and classic elements, and I think the grade definitely adds to that aesthetic.

The sparse soundtrack really conveys the ebb and flow of the simmering tensions between the pair, how did you create that fine line of a score which remains light hearted but also has gravitas?

When I started editing I actually cut with a bunch of placeholder tracks that I felt would build tension in the right places and developed an initial framework doing that. Then, when Jonathan Franco came on board he was able to re-create this ebb and flow with a new sound that captured the same feeling which was amazing to see. From there, we tweaked and added more specific moments to make sure everything felt as tight and on beat as it could. Jonathan and I have really similar tastes and he always understood what I was asking for so I think hitting that line came naturally for us both.

Your journey from shooting until completion seems incredible quick, what is your process and how did you manage such a speedy turnaround?

Looking back, I think I was just kind of on a rampage to get something made that I could be proud of. Being an editor probably helped speed up the process also since I was able to visualize it clearly. I felt like I could really see what this would look and sound like and I happened to have the time and resources to put everything into it at that moment. It was important that Megan Duffey, my producer and I planned to make sure everything was realistic and achievable within the near future. Other than that, I was super determined and had been spending most days inside watching that BBC show Shetland since there wasn’t a lot you could do outside or with others at that point, so I was ready to make something happen!

I felt an immediate draw to the film and perhaps a little too relatable at times. How have you found the reception so far and how did you make it so translatable to so many audiences?

I’m so glad to hear it. I hoped it would be relatable in some way. Seeing my friends’ positive reactions and hearing from other filmmakers has been the best part so far. My goal was to get into at least one festival with this film so I’m more than happy with the outcome. I’m not sure I have a good answer for how I made it translatable other than I pulled from life experience and feelings. My goal is to get even more honest with my filmmaking as I go forward.

I’ve written a low budget feature that I would really like to direct if I can manage to make it work. I’m also working on another short film that I can hopefully make for almost no money at all. Basically, just trying to continue to make more stuff!