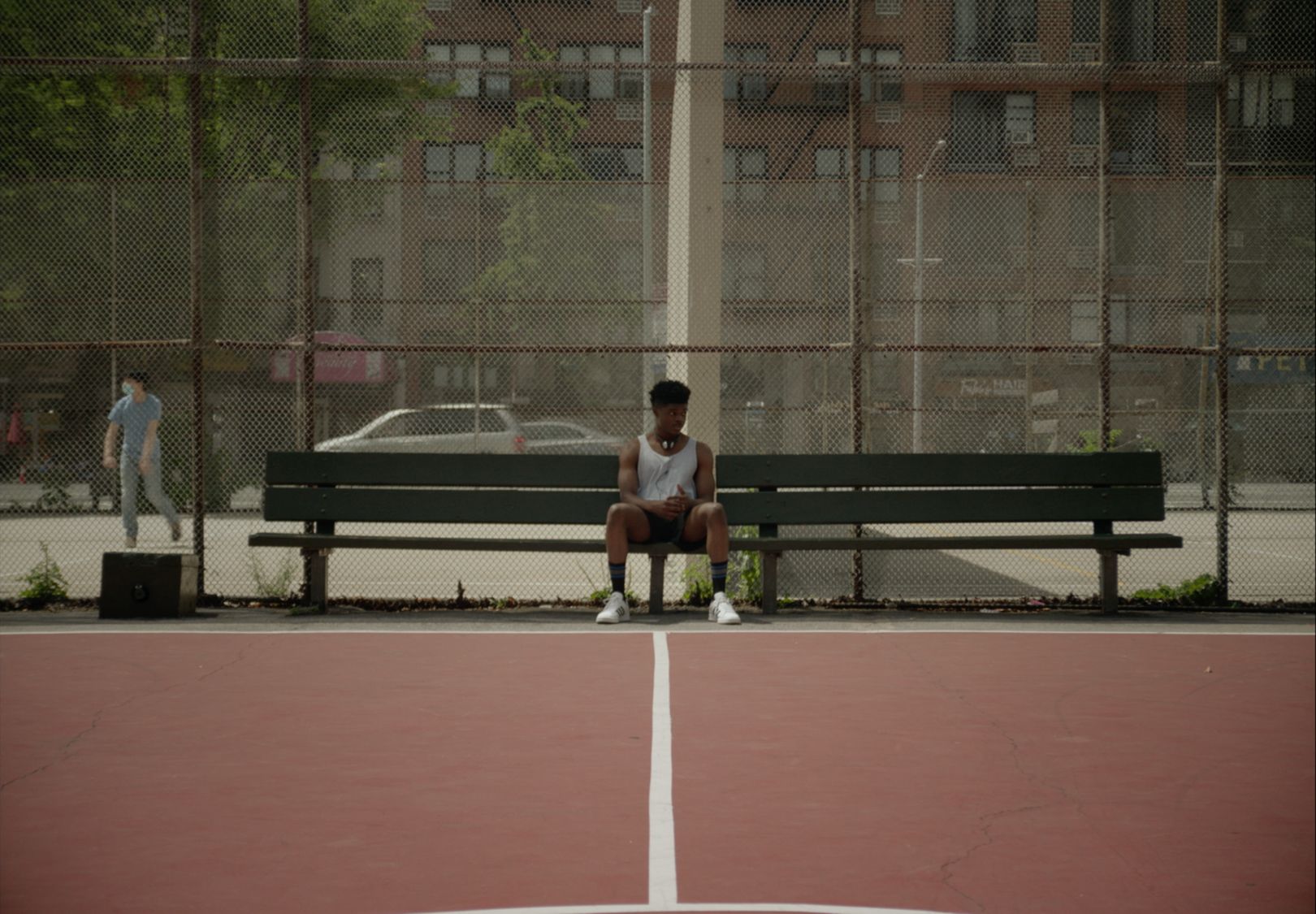 The fact that the mere opening beats of a song have the power to vividly transport us back to a specific moment in time and evoke deep emotion is the fertile ground which underpins Director Ray Smiling’s latest sonically infused project. A celebration of the power of music told through three separate vignettes, Play This At My Funeral co-opts the mixtape format, allowing us as to experience the idiosyncratic needle drops that soundtrack the lives of its New York based characters. Finding inspiration from the unlikely source of YouTube comments, Smiling has spent a decade collecting a wide range of music-ignited memories; memories which are mostly formed by place, time and situation rather than lyrical content or the intentions of the original artist. An ongoing project we’re hoping to see more of, we invited Smiling to speak to us about seeking musical and emotional diversity, presenting the reality of the eclecticism present in all cultures and how his advertising background helps him keep his films on point.

– The following interview is also available to watch at the end of this article.

Why don’t you open up by telling us a little bit about the film?

It’s a collection of three vignettes all about people’s connections to music. It all came from the idea that when artists create music and put it out in the world it means all these things to them. For me, there’s a thing about music becoming autobiographical in terms of the audience’s perception. Someone could have made a song about their girlfriend leaving them or their husband being awful to them. They pour out all this emotion and that song could become super popular and suddenly Taylor Swift’s greatest heartbreak is some little girl’s 10th birthday memory connected to that song. It became such an interesting concept for me, you put art out into the world and then it means something completely different to anyone who is interacting with it. It was the juxtaposition of the intention of the artist when releasing the song which then becomes ingrained in somebody else’s life and has a completely different connection to them.

It was really trying to switch up the emotions and the music to create a contrast.

How did that line of thinking translate into the creation of Play This At My Funeral?

For a long while now I’ve been working on an informal project that has really defined this web series. I’ll go onto YouTube and put in a song that was very popular about 20 or so years ago. I scroll through the comments and inevitably, I will always find someone who gives this deep testimonial to no one specifically, but it’s a very personal memory that they have with this song. It feels like it’s a need that people have to just offload this memory onto the internet. So for years now, I’ve been going through songs and I’ll have a document open where I save these comments. I’ve been hoarding all of this for almost 10 years but now some of those comments have led to the making of the series. 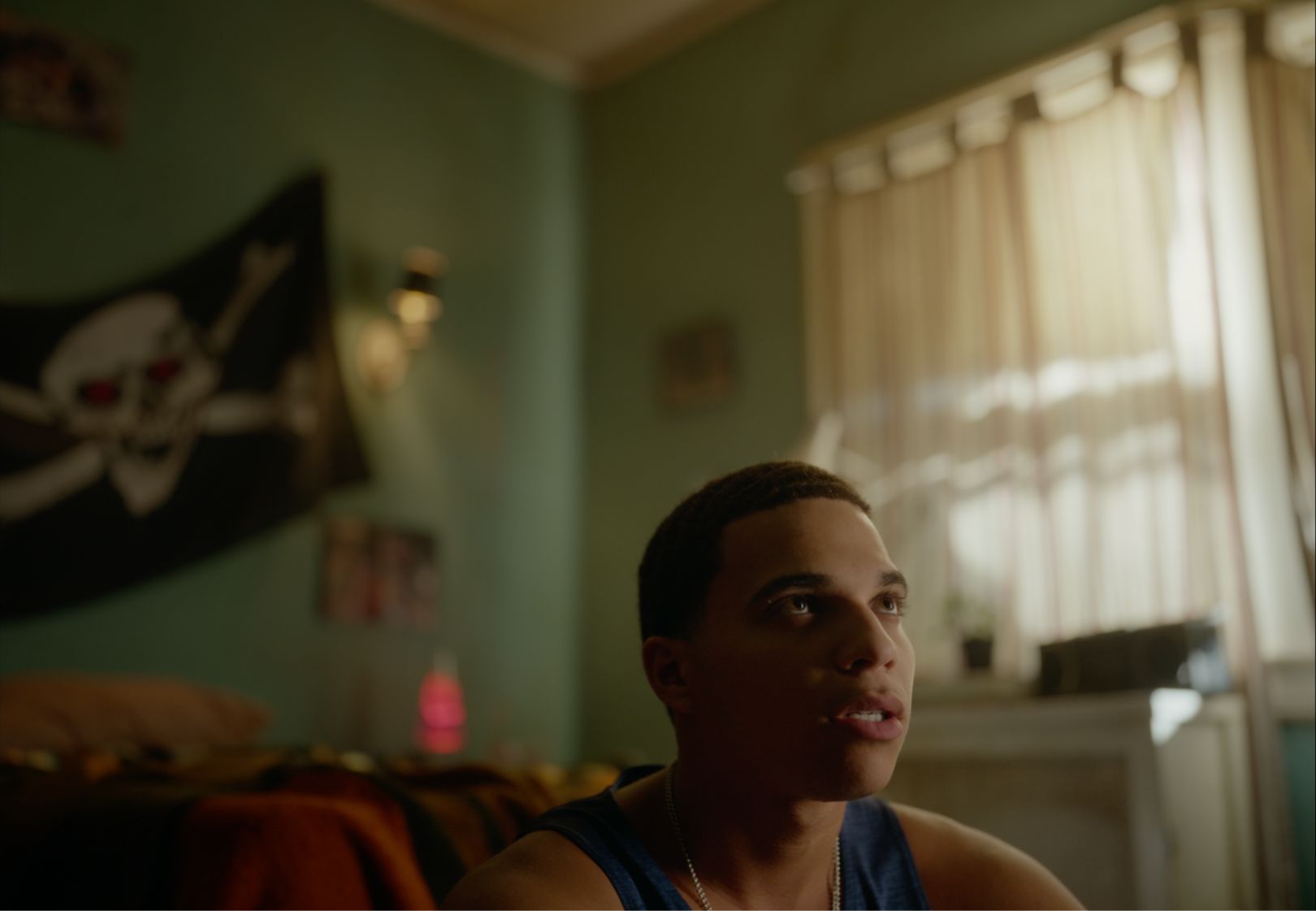 What was it about the three stories we see presented in these vignettes that made you want to portray them in the film?

I had written about 10 of these when I first sat down and so I was trying to pick the ones that I wanted to actually make. It was about having a diversity of emotions and a diversity of music. I didn’t want to have three rap songs that are all just about having a good time. Ultimately it was really trying to switch up the emotions and the music to create a contrast which is how I ended up with a classical song, a metal track and a dirty rap. It also felt very representative of the things I listen to.

I understand that casting representation was an equally important aspect for you, how did you go about finding people to work with?

I have a great casting director, Alison Twardziak who’s worked on pretty much everything that I’ve done. I wanted to show people of color because ultimately, I think white people have the liberty of being musically eclectic which is very expected. But when you think of people of color it’s all centred around the one type of music. If you’re outside of that, people generally tend to give you a pause for a second and then remark how interesting it is that you are Malaysian but like country music.

I get it on an anthropological level as it is interesting to a degree but I wanted to push back against that and have Black people listening to metal and Spanish people listening to Memphis rap. I live in New York, I grew up here and it is the norm to cross those barriers. I’m not of Latin descent but I have lived around Latin people all my life and forever have a song like Suavemente fucking stuck in my head. It’s a real phenomenon that I wanted to represent in this series. When I was a junior in high school I discovered metal and hardcore rock music. I grew up in the projects in Brooklyn so rap music was already in my head alongside soul music, funk, jazz and so I have ended up with a very eclectic sort of taste. 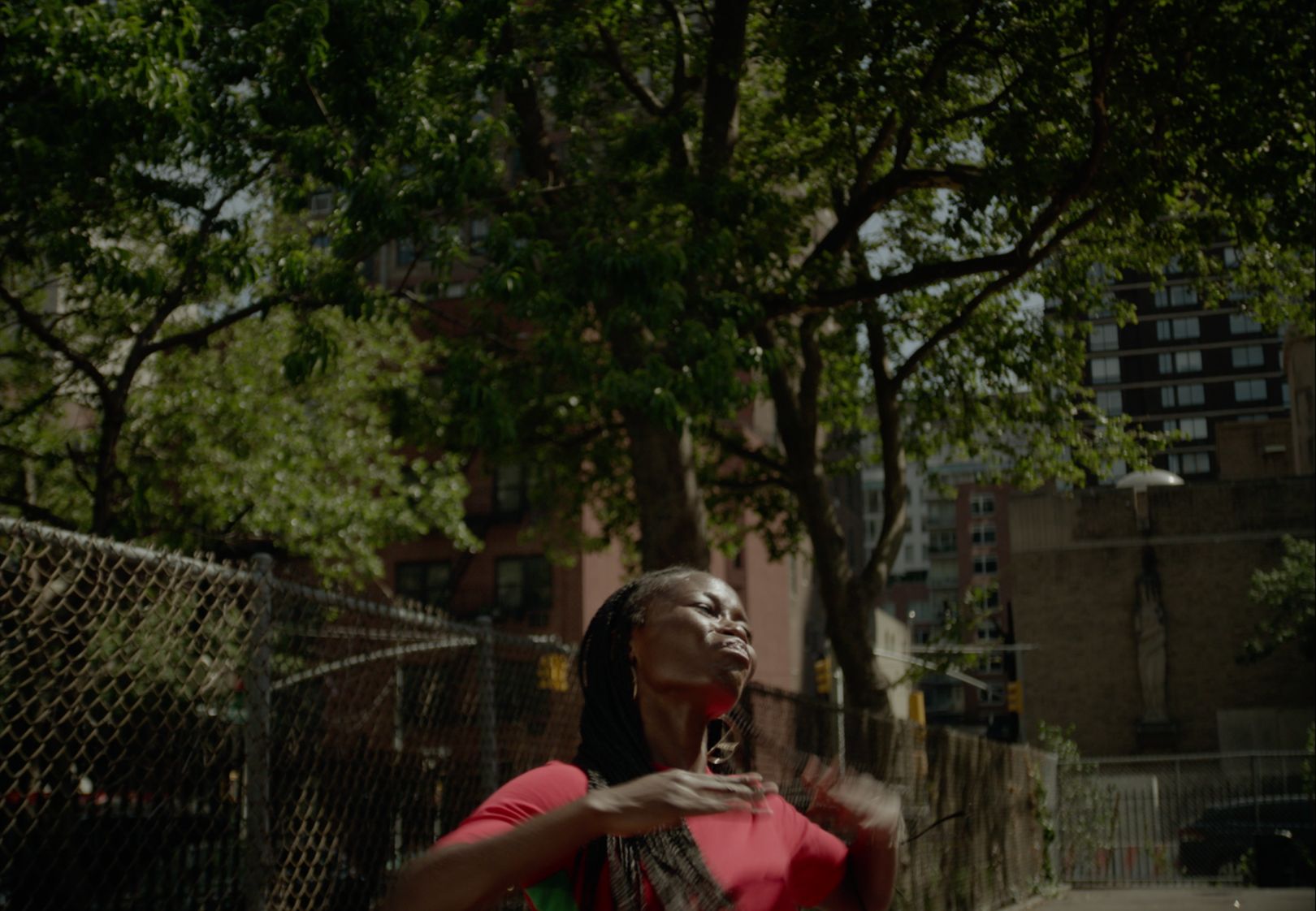 Once you had your cast and your three vignettes planned how did you move into production?

It was all shot here in New York. I like to use the city as an extra character. From a practical sense, I know New York, I know where to find all the places I had in my mind. Overall it was fairly easy to pull off as we got permitting and everything as it was just a couple of locations. The hardest thing to do was to shoot in Times Square just because it is so goddamn chaotic. But actually, I think that helped us because I’m running around Times Square with a guy dressed like Spider-Man with my DP on an easy rig behind him and five or six PAs running around trying to get release forms but no one remotely noticed because Times Square is just pure fucking chaos. We ended up running into four other dudes dressed as Spider-Man. Once we got it all going and I had a great team to pull it all together, everyone came through and delivered really amazing work.

We are just catching a line here or there or a reaction sound which made it very easy to stitch it all together and feel like it was documentary.

The scene in Times Square with Spider-Man taking a photo with a family, was that planned?

No, for that vignette the opening where he meets the girl was an actress and all planned, and they ad-libbed a bit on top of that. The bit at the end when he gets into the car with a girl was also planned but everything else is just what happens in Times Square. There were moments when I was right behind my DP and I would see someone and tell him to go talk to her and then have the army of PAs explaining the project and asking them to sign off. Everyone was just very excited to see Spider-Man!

How did it work going into the edit with all of your disparate moments of footage?

Because that was the plan, I knew that it would cut together because there would be music under it and he’s not having real conversations with people. We are just catching a line here or there or a reaction sound which made it very easy to stitch it all together and feel like it was documentary and flowing in that way. 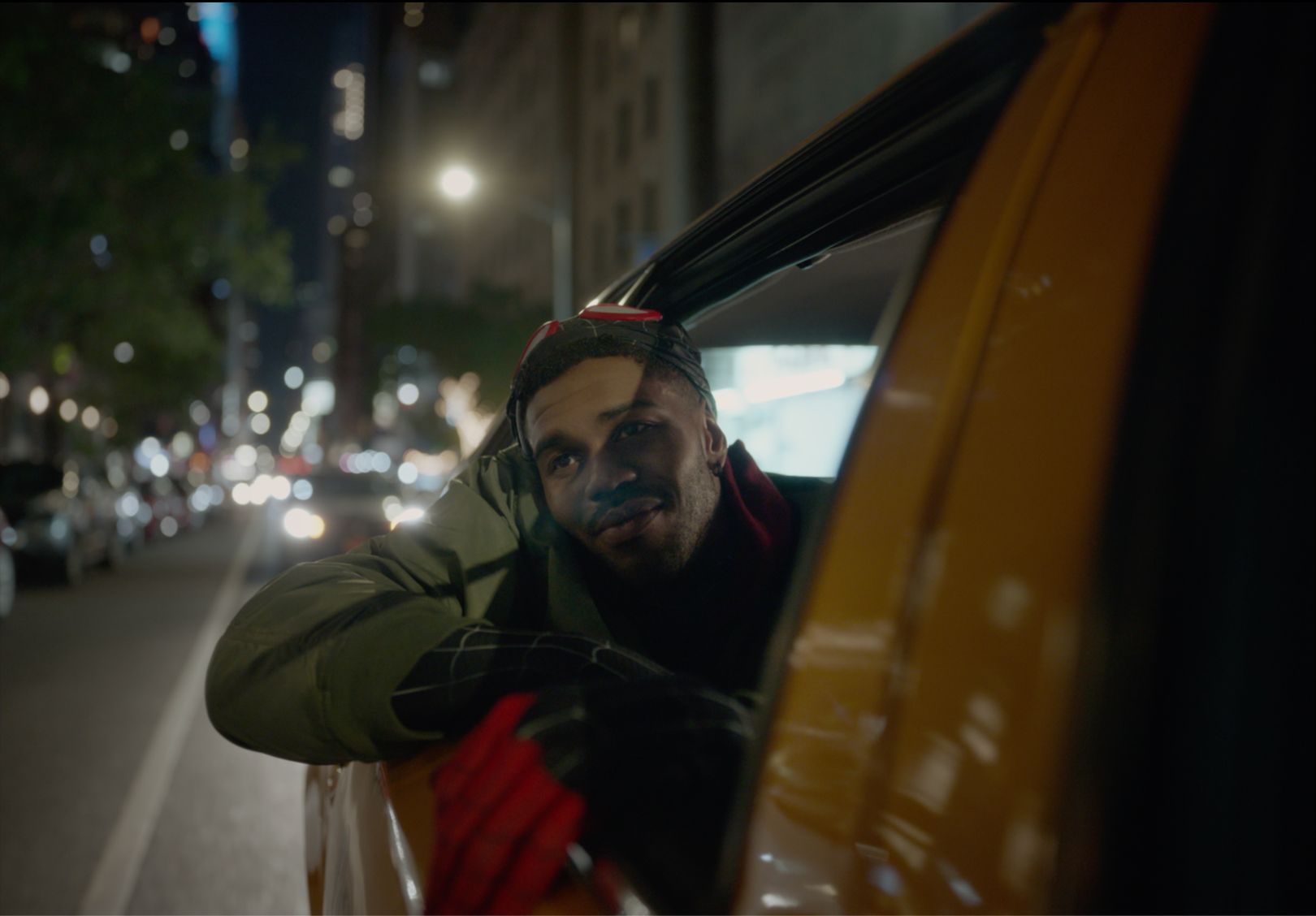 You come from a very strong background in advertising, how do you think that experience affected the look and feel of this?

Yeah, having worked in advertising for a hot minute means that my bar is very high because when you’ve worked on stuff for giant brands which costs millions of dollars, you want it to look just as good even if you don’t have that budget. I pay real attention to the craft of the image and the sound. I think advertising really developed my ability to tell stories in short form because you might have anything from 15 seconds or a minute. It forces me to go back through my initial writing and see what I can take out so that every beat feels essential and like it is moving the story along. It really just helps me cut the fluff off everything and make it as potent as possible.

I also try to work with the same people over and over again because if none of us are assholes we might as well do it again!

That all really comes through in the slickness of the film as a whole. How did you and your team achieve that?

I have got to give a lot of that credit to my DP Danny Vignal, he really came through for me. I’m not the most technical director. I speak in references and metaphors and express what I want something to feel like. Working with him was just such a great collaboration because I could say “I want it to feel tense. I want this to feel like a horror movie even though it’s kind of funny.” and he was able to translate that into something on screen.

I’m repped by division7 who have helped me a lot with putting together the team. I have a wonderful producer Luigi Rossi, and Camilla and David at division7 really helped pull all the strings to get this team together. I also try to work with the same people over and over again because if none of us are assholes we might as well do it again!

What do you have in mind for the future of Play This At My Funeral?

Obviously to try to get it on literally every website in the entire world! I’ve written a bunch of these series and have ideas for a bunch more. I just haven’t put pen to paper yet. Ideally, I would love to make this a full-on series akin to something like Love, Sex & Robots where you have varying vignettes that differ in length of time and all encompass different tales as I feel there are really an inexhaustible amount of different types of stories. The document I have collated from comments on YouTube is eight pages long and that’s not me intentionally finding things. I might just think of a dope Whitney Houston song and wonder what people are saying about it. Then you read a story about someone being stationed in Germany in the 80s which is amazing and I can add my own stamp onto that and come up with something incredible.

Apart from the continuation of the series, what are you working on next?