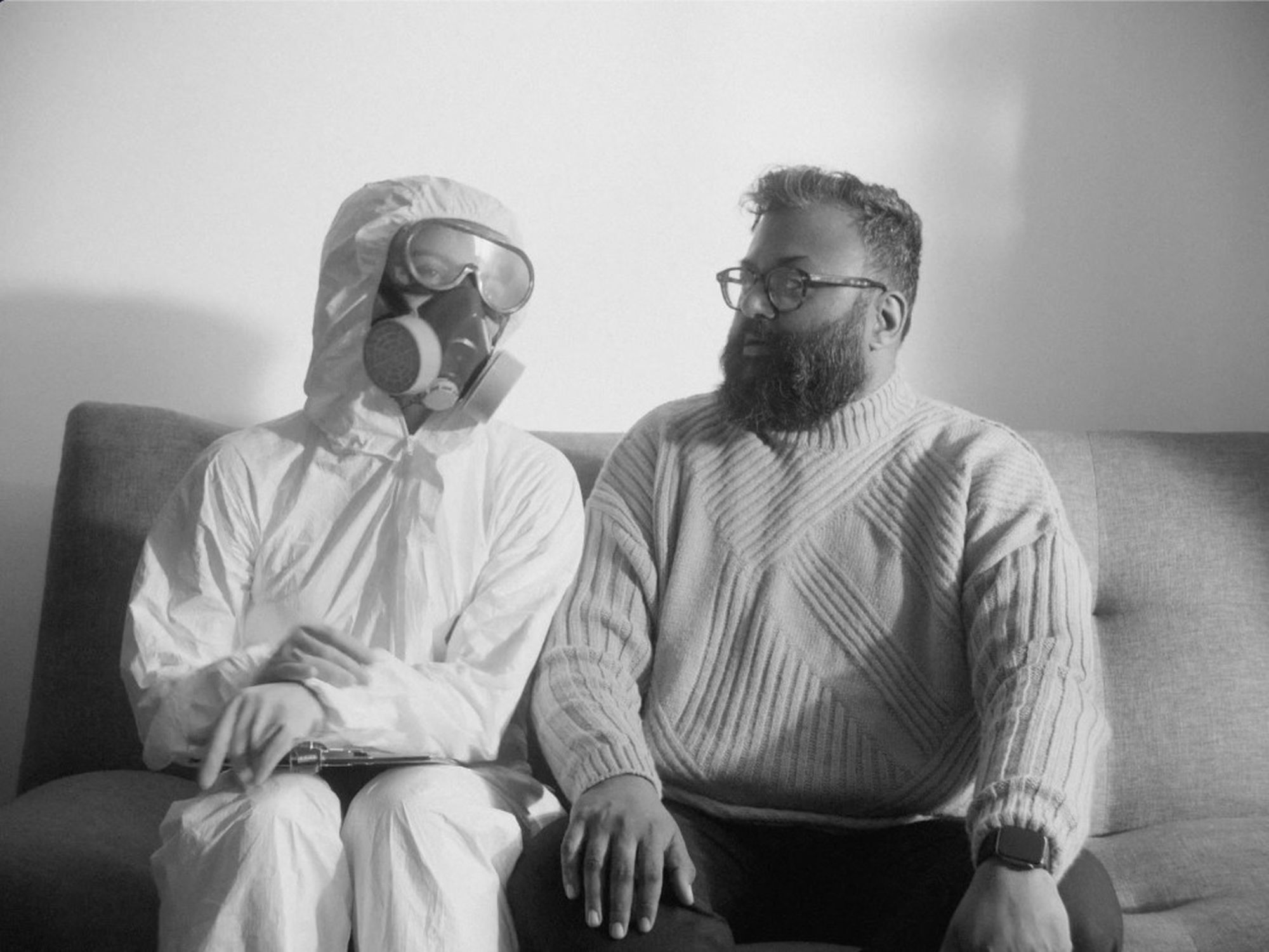 A bizarre yet relatable dystopian future 2024 is the setting for Nick Flügge’s witty mockumentary The Last Bee On Earth where the wondrous race we call human beings has finally managed to drive all but one lone bee to extinction. This bee serves as the protagonist in a comedy centred around a man who finds himself tasked with its care only to unexpected become part of a love triangle of apocalyptic proportions. The short sees Flügge working with the talented Sunil Patel – who previously graced DN’s pages with his turn in Rosco 5’s Insecurity Questions – and Roxy Dunn whose alluring mystery is only accentuated by her, presumably government mandated, hazmat garb. It also has a script which brings a delightfully dry wit to a subject matter which is most often associated with portentous proclamations of future doom – and it has tiny bee furniture too. We spoke to Flügge about going from long gestating idea to rapid script writing, the development of a character who cannot be heard or really seen and the comic irony behind his decision to present his near future comedy in ‘serious’ black and white.

Apart from the obvious draw to play with miniature furniture where was this hilarious script borne from?

During lockdown, I was desperate, like every other filmmaker going, to create some genius, small cast, single room, ‘heart-breaking work of staggering genius’. I think I had something but by the end of the lockdown, I’d worked on this little script so long that all the joy had gone out of it, and lockdown was finished anyway. But I hadn’t shot something for ages and knew if I didn’t shoot something soon, my shooting eye would fuse over, so I went back to this idea of a guy looking after a bee I’d had ages ago but couldn’t make work. It was then that I thought of a second relationship in the film that really made the idea click for me. I think that was jolted into place by knowing Sunil and Roxy’s relationship off-screen – they’re really good friends which flushed out what the structure of the film could be. The tiny furniture thing had also been swimming around in my mind ever since I tried to make an ill-fated mini-sitcom called Ghosts.

I really wanted the film to have that pretentious, grandiose, this-is-a-moment feel that a lot of eco-documentaries have, which we could then poke holes in.

How do you know you’ve reached the point of no return with a script that has lost its joy?

You know I think there’s a bit of “I’m taking my ball and going home” type of thing, the feeling of why can’t everyone see my clear and obvious genius with this thing. But also, often you are your own producer so you are pushing this stone up a hill all by yourself. I think ultimately if it’s not fun to work on anymore, find something else to do. At its heart comedy is meant to be uplifting, Jordan Peele’s advice for writing was “Follow the fun” which I think is good advice.

From the initial spark of inspiration for a film about a man and a bee, how long did it take you to arrive at the final script?

I had the initial idea for a guy looking after a bee and fiddling with a load of tiny furniture for years but never felt I really had something to form a script. Then when I realised there had to be a second relationship interest, the whole thing came together really quickly. I wrote the script in a few days and started showing it to people. I think just knowing Sunil and Roxy and knowing their sort of prickly but warm relationship really helped me ‘see’ the script. Then I was able to form the emotional backbone to the story quite quickly.

I knew them both as friends and I’d been thinking for years of trying to write something with them both in. I have an idea for a short, with them as junior CID detectives on their first day, just sort of staring at each other over a Formica desk, watch this space. When this script finally came along and I realised Roxy would be perfect. Also she’s great if you’re shooting in London, as you don’t have to pay for a cab, as she comes by bicycle, every little helps! 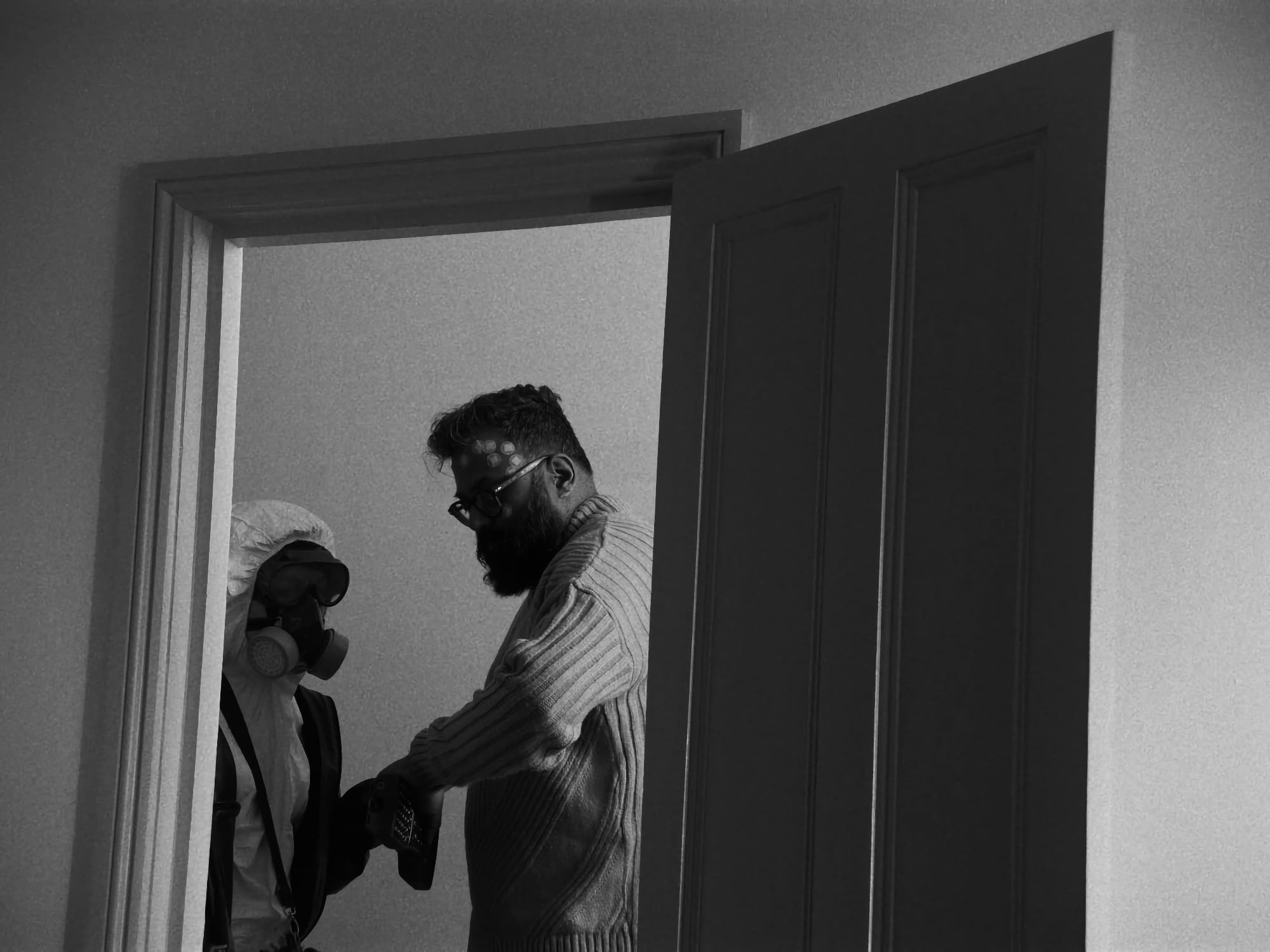 Roxy’s dialogue is imperceptible yet so fluidly feeds into the comedy of the film, how did you develop the character with her?

Well, to be honest, I was a bit embarrassed approaching her; “I’ve written this thing I’d really like you to be in but I haven’t written you any lines and no one will be able to see your face!” But she immediately got the whole concept and embraced it whole-heartedly, even though the mask was continually cutting into her nose, the heat in the suit was gradually steaming her alive, and she had to improv all her lines, apart from that I’m sure I was a joy to work with! We developed that whole character on the day. She just took very minor notes from me and built this warm, slightly nervous, high-stakes character with a brilliant physicality that was obviously needed… since we couldn’t hear her. Sorry Roxy, I promise to give you actual lines next time, funny ones too.

I knew the film had to be a mockumentary, but that genre has been done to death, so I wanted to give it an unexpected quality.

Often a film’s comedy beats are nailed during post, how was that process for this film?

I like to move really quickly, especially as I edit my films usually. I put together an offline and did all the effects myself in Adobe PP. So I had a work in progress edit in a few weeks or something. I have a little comedy collective with three other directors called Mr.Tibbs, we have comedy screenings every few months in Close Up Cinema in Brick Lane. So I was able to use that as a sort of test-screening for the offline, then made the necessary tweaks afterwards before it went to the grade.

For the final online, we had a brilliant colourist called Alex Dow who the DOP Max Brill was friends with who added that extra layer of richness and polish. 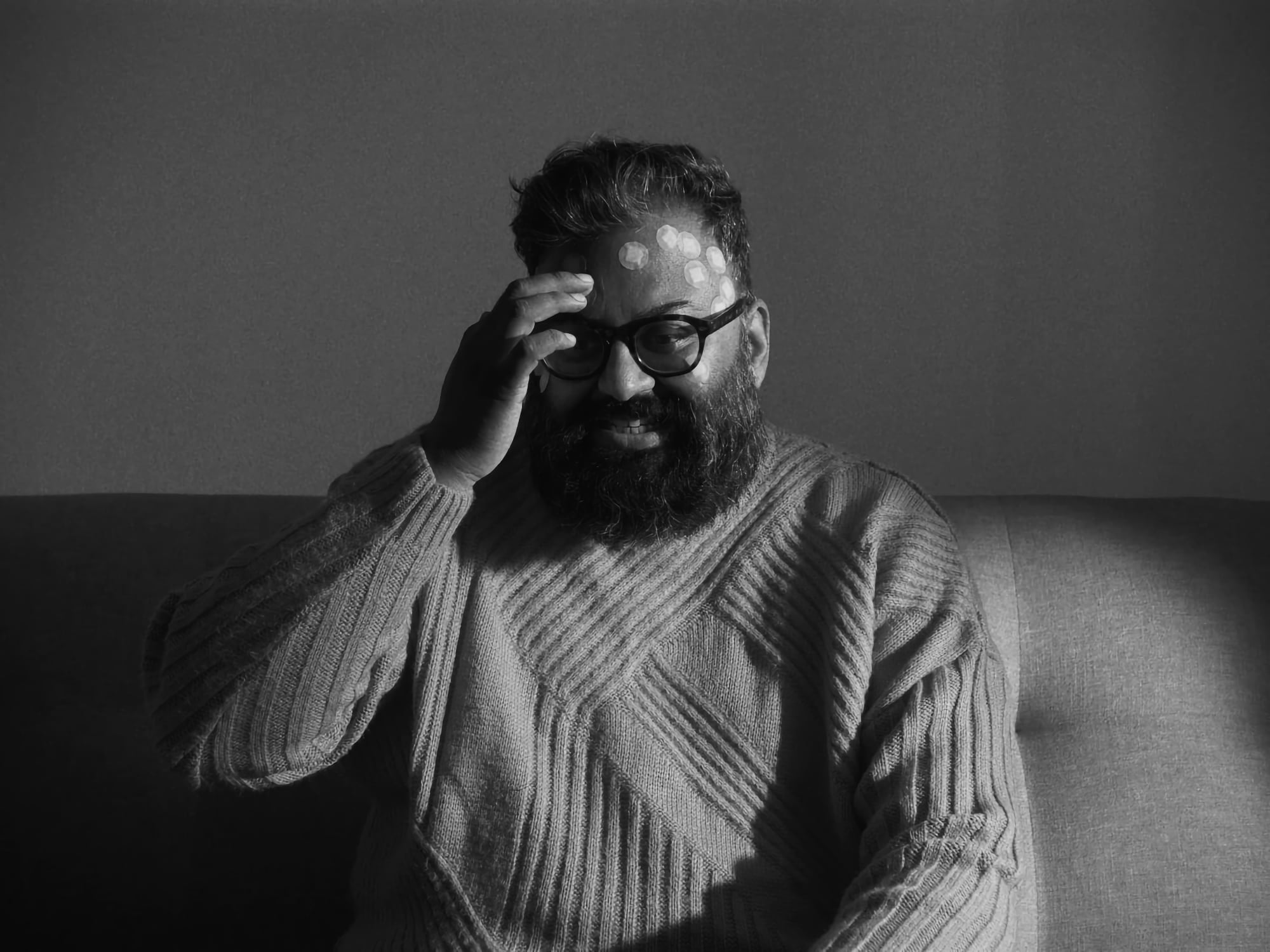 Why did you choose to go with black and white for this contemporary near future story?

Aha, a few different reasons, I knew the film had to be a mockumentary, but that genre has been done to death, so I wanted to give it an unexpected quality. Also, you know, regarding the theme and The Last Bee On Earth title, I wanted the film to have an elegiac feel (I’ve been using that word a lot, I hope it means what I think it means). I really wanted the film to have that pretentious, grandiose, this-is-a-moment, feel that a lot of eco-documentaries have, which we could then poke holes in.

Also, I thought tiny bee stuff in grainy black and white would be much funnier than in colour. It just looks like we’re taking ourselves too seriously… Max Brill came up with the idea of shooting on a classic 16mm lens for docs (Canon 8-64 f2.4 paired with a Red Komodo) which worked fantastically with the 1.33 format as we wanted to suggest it’s both set in the future and lost in the past. I wanted it to feel like an archive film that you might play in schools to show the kids what did happen to that last bee.

I’m working with a brilliant comedian and actor Lia Hatzakis, and we’ve been kicking around a short film idea for a few months which we will go up and film in her dad’s fish and chip shop in Bedworth. I want to shoot this one on a total zero-budget, iPhone, natural light and wireless mics. I really want to get into the habit of getting out there, shooting small, contained, funny stuff, and getting it out there. Expect a lot of unrequited love, sexual frustration and chip fat.