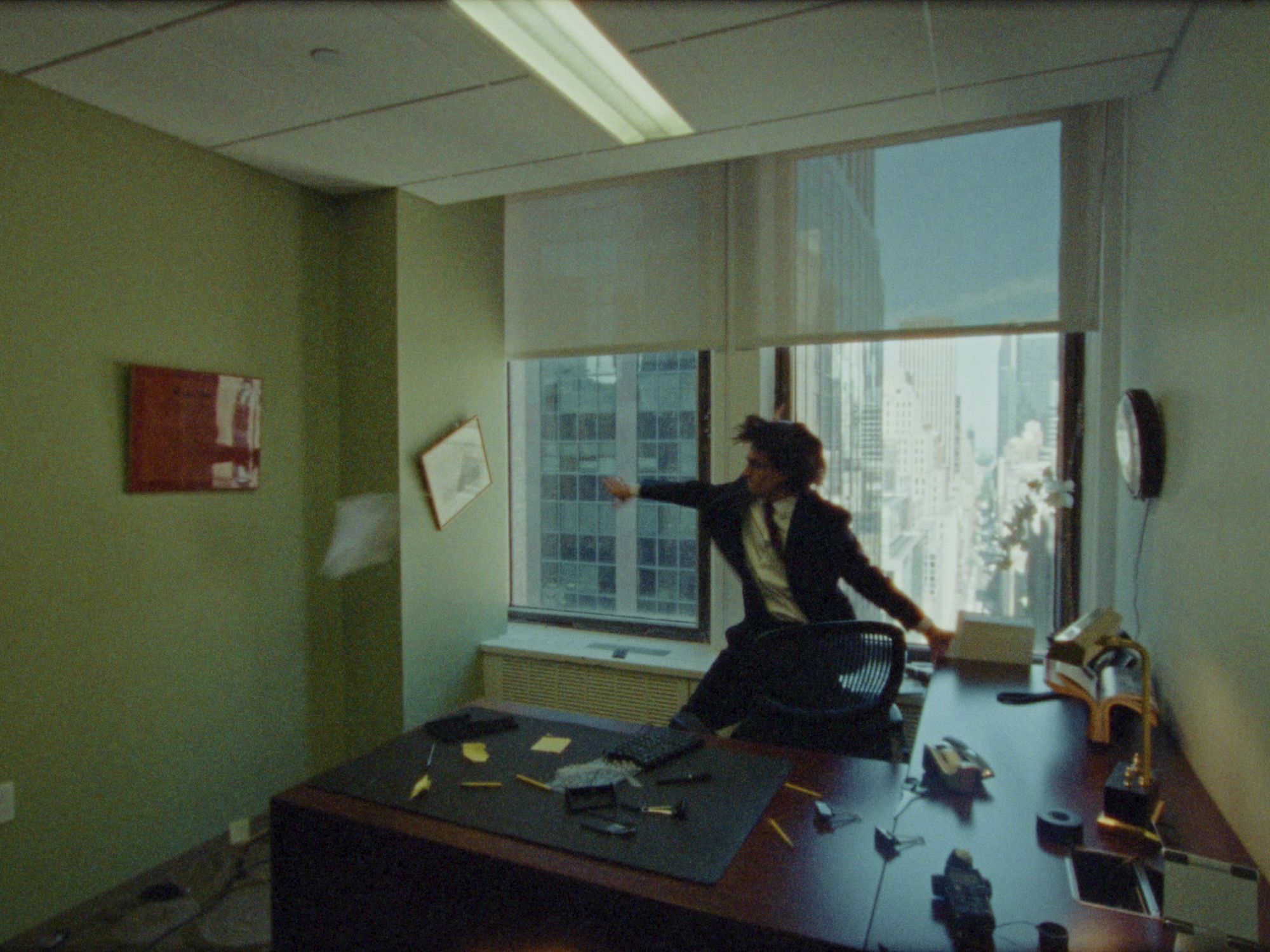 Director Martin Wolfgang Klapperbein further builds upon his already solid working relationship with the French musical artist Tobias Dray in his latest video release Fuk It. The film sees Dray – a widely recognised internet personality who has amassed a considerable 3 million strong TikTok following – shedding his former corporate self to emerge as a freewheeling punk-styled individual bounding along the streets of New York to the track’s in-your-face refrain. Klapperbein carefully selected specific locations and scenarios to match Dray’s change of identity and the energy of the music until the inevitable and all too relatable realisation – that we are only ever cogs in some faceless machine. Enthused by this anarchic promo, we spoke to Klapperbein about the draws and pitfalls of shooting a music video amidst the chaos of New York City, the set up which enabled them to capture authentic on-street reactions to the enigmatic musician and how his desire to leave the video in its raw form moved the edit forward instinctually.

Was it an immediate “yes” from you when Tobias Dray asked you to direct this video?

Tobia’s clip of Fuk It was instantly tantalizing. I was fascinated by the uniqueness and dimensionality of the sound. When Tobias reached out for a music video, it was a no-brainer, and I was quick to start planning. As part of my process, I visualize a setting while listening to the song. I knew almost instinctively that the video had to be shot in New York City. The song reflected its gritty yet humbling mirage of constantly evolving people and places. Placing Tobias in a mundane situation, with real people surrounding him, I wanted to create an experimental atmosphere.

The parallels in our desire to experiment with our mediums have only furthered our working relationship.

The story follows Tobias as a wall street banker having a meltdown and ultimately saying Fuk It to his job. The video opens with a long shot of him getting a text from his boss, which triggers the series of events that follow. The barber shop scene where Tobias gets a punk hairstyle is a metaphor for his freedom from who he is expected to be. Inspired by Philip-Lorca diCorcia’s Heads series, Tobias running away from the spotlight represents the job and life he was so desperately trying to escape. The scene eventually leads to a crowded rave depicting how he’s only a cog in the larger machine.

It was a very quick production process and the tight turnaround time for the final cut from when I received the footage, allowed me to edit the video instinctually. The deliberately uncoloured footage was a purposeful choice to add to the rawness of the tone 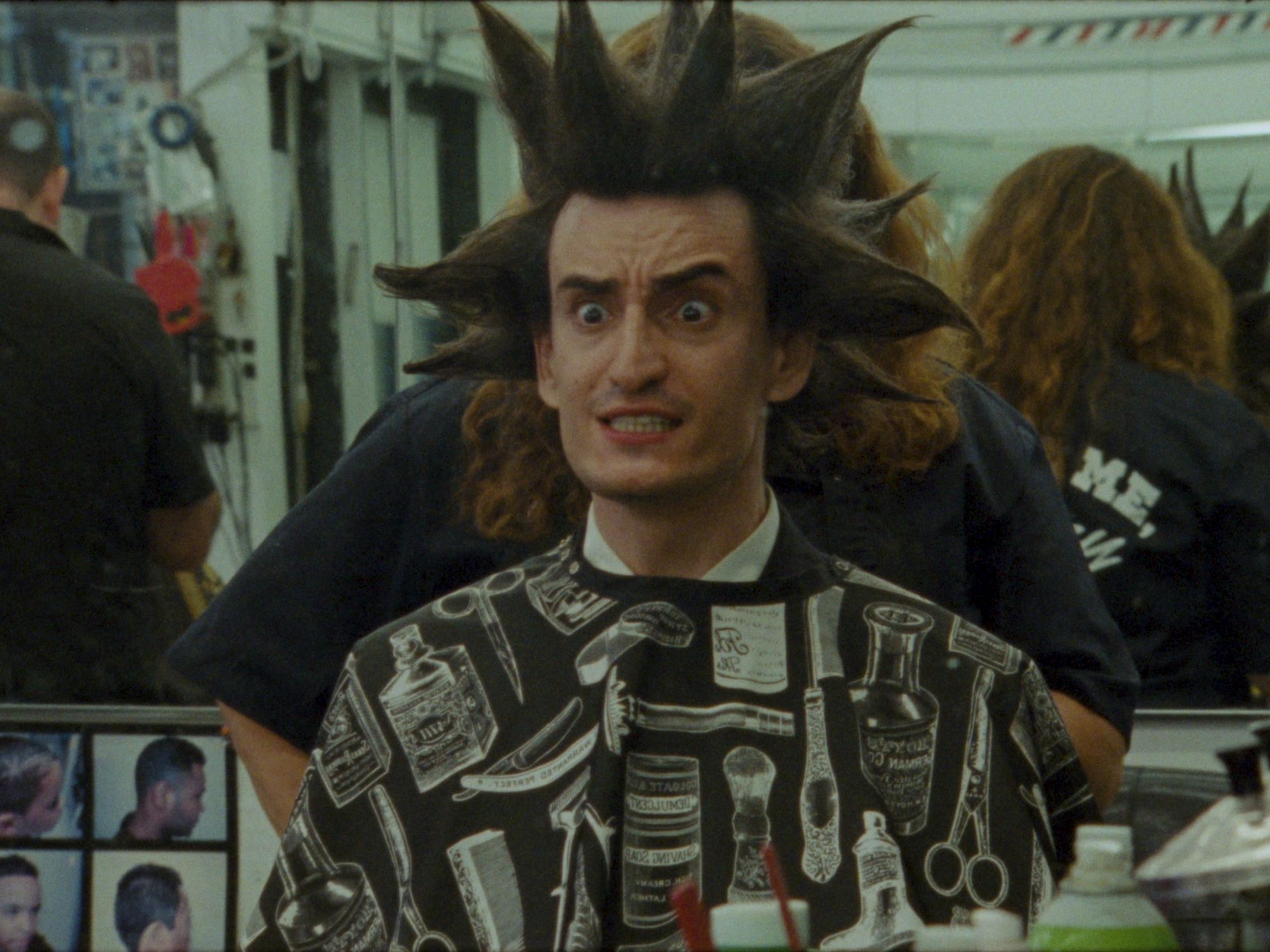 You have done quite a lot of work with Tobias, how has your working relationship developed and how much input does he have into the process?

Tobias and I began working together two years ago when I directed I Don’t Mind. We have great synergy in that he trusts my vision and I believe in his complete commitment to the role. His ability and willingness to participate in experimental concepts are a motivator for me to push the bounds of my ideas and create unique stories. With most artists, I’ve been afforded more creative liberties as our relationship progressed but Tobias gave me complete creative freedom from the very first time I worked with him.

The parallels in our desire to experiment with our mediums has only furthered our working relationship. We both appreciate a sense of reckless abandon and impose few if any limitations on each other. Tobias didn’t have a budget for a music video for his song HMU but instead of that being a limiting factor, I filmed it myself on an iPhone which allowed for a pace that wouldn’t have been possible with a crew. Through these experiences we have created a space for pursuing our visions uninhibitedly which has resulted in Fuk It.

How did you come up with the sequence of events which follow Tobias’s meltdown?

Leading up to this video, I had a number of conversations with friends who were experiencing feelings of corporate burnout. I grew interested in a common perception that their career and lifestyle defined their identity. While writing the treatment for this video, I began thinking of all the freeing mechanisms someone would resort to in an attempt to escape a life and identity they despised. The most obvious being a radical change in their appearance to dissociate from their ‘former self’. Another being expressing their rage to the world and enjoying the freedom of being able to do so. At the same time, I didn’t want the video to have a simplistic happy ending. I wanted to highlight how despite the euphoric moments, the character feels chased by his former identity and still feels like a cog in the machine. 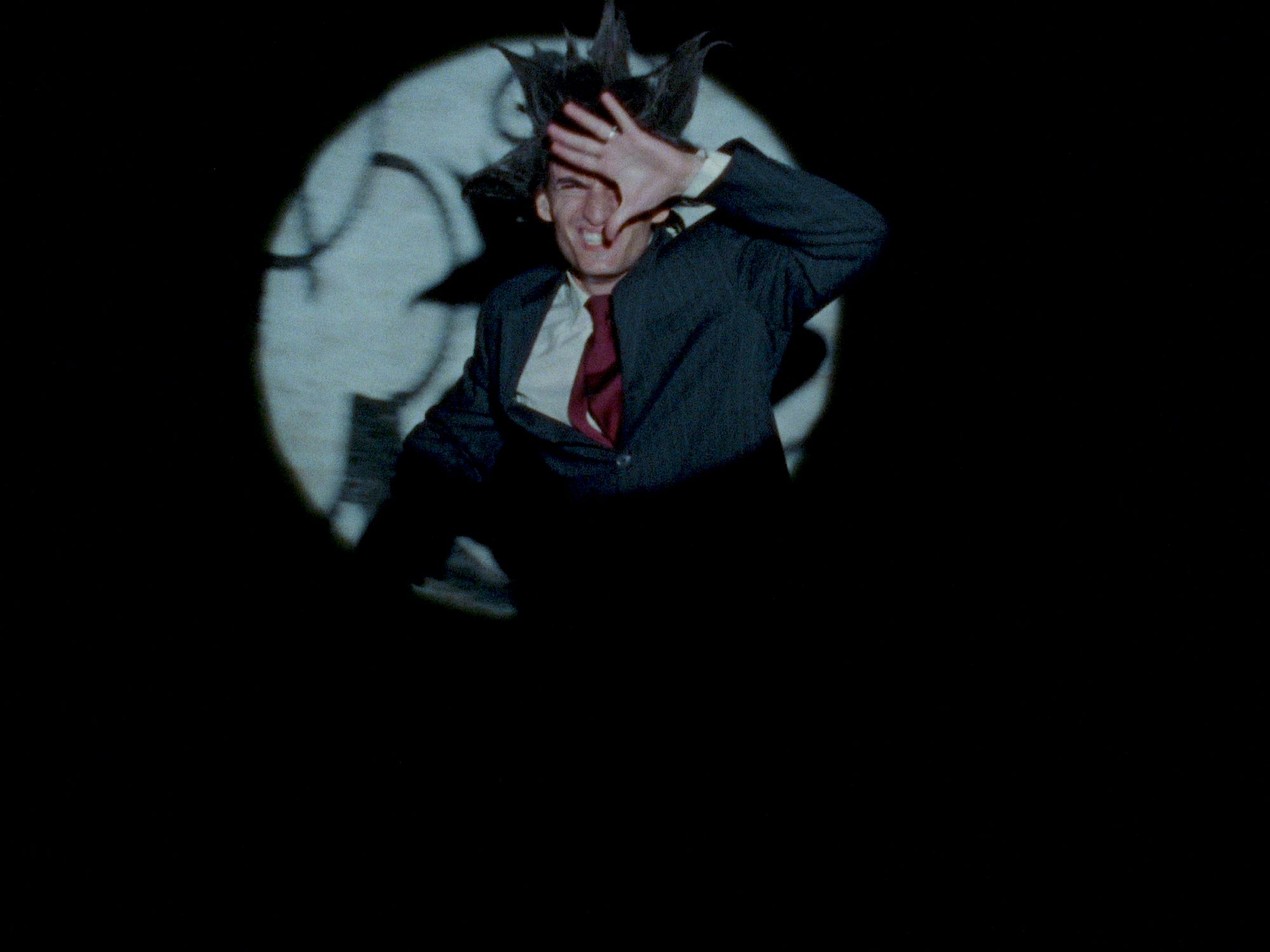 New York can be a very complicated place to shoot, how did you decide on your particular locations?

I think New York can be a daunting place to shoot for any director. I had little success in locking in locations from Toronto. The sheer size and complexity of the city, both in terms of cultures and spaces made it challenging to find what I was looking for. With two days to the shoot, I flew to New York to actively engage in the scouting process. I needed to see, smell, hear and feel the locations to make a decision.

Bryant Park was an obvious choice given the corporate, chaotic New York narrative of the first scene. From there, I needed to choose the other locations within a reasonable distance in order to stay on schedule. That said, I didn’t want a barber shop or office that was too sterile, too clean, or too modern. I was lucky to find both that were seamlessly woven into the characteristic scrappiness and grittiness of New York. Conversely, for the spotlight scene, the once industrial landscape of Greenpoint in Brooklyn was apt to show Tobias running from his identity as a financial analyst. The contrast between the locations in the daylight and nighttime scenes complimented the arc of the story and reassured us of our decision to shoot this video in New York. I was fortunate to have Sachi, a New York native, as my DP and Natalie and Rachel as producers who were instrumental in this process.

The Bolex had a modified battery plate that allowed us to roll without having to rewind the camera.

In keeping with the song’s ethos Fuk It has a run and gun feel to it. How did your set up enable you to remain nimble during the shoot and of course grab those bewildered reaction shots from passersby?

My DP Sachi Bahra was instrumental in selecting and procuring the gear. With multiple company moves on a tight schedule, mobility defined our choices. In order to switch between tripod, handheld and SnorriCam, we opted to have different types of cameras and lenses. For the telephoto work we used an Arri 416 with a long range zoom and used primes lenses for the handheld work. Shooting telephoto was perfect for capturing reactions to Tobias in a cinema verité style, while also maintaining a small footprint.

For this video, I wanted to pare it down to highlight the raw, gritty feel of the footage.

To exaggerate moments of the chaos and movement of Tobias running through the city, we would add on a 2x lens extender. This setup was contrasted by a SnorriCam rig on Tobias, carrying a Bolex and wide angle lens, to further emphasize his feelings of anxiety. The Bolex was modified to run off newer camera batteries which allowed us to efficiently roll longer takes without stopping to rewind the camera. This facilitated the running scenes where Tobias could be free of the crew in restricted areas.

You mentioned Philip-Lorca diCorcia, who else did you draw inspiration from?

Another inspiration was Gerald Kargl’s Angst with its use of the SnorriCam cementing the movie’s perspective through the eyes of a veritable psychopath protagonist. The protagonist’s unhinged energy in Angst was similar to what I wanted to incorporate in the meltdown scene. 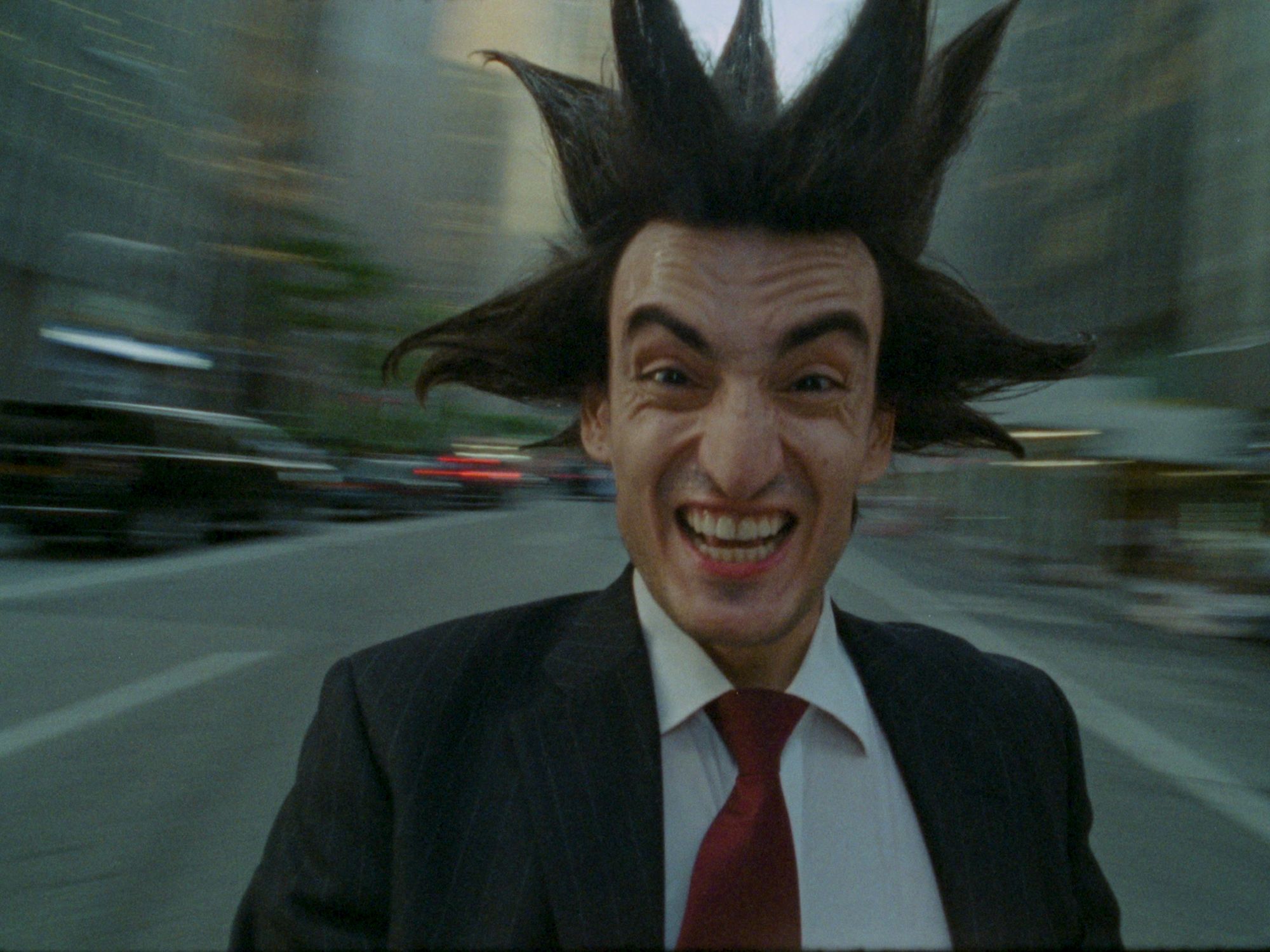 I’m very intrigued by your instinctual edit, can you go into more detail about that process and what you feel it enabled you to do with this project that you perhaps haven’t done in the past?

I’m often seduced by the opportunities of technology, and try to augment my projects with various VFX and editing techniques. For this video, I wanted to pare it down to highlight the raw, gritty feel of the footage. I’m also guilty of revisiting a cut days later to embellish it further. Employing a quick and instinctual process for this edit allowed me to maintain the authenticity and integrity of the footage. Further, it brought to the fore the real feelings enacted by Tobias instead of adulterating them with snappy transitions and other tools. The biggest factor that enabled this process was having written and directed the piece, I knew every second of the footage.

I am currently in pre production for commercial work and editing a documentary series. I’m also working on writing a feature film about my father’s immigration story.