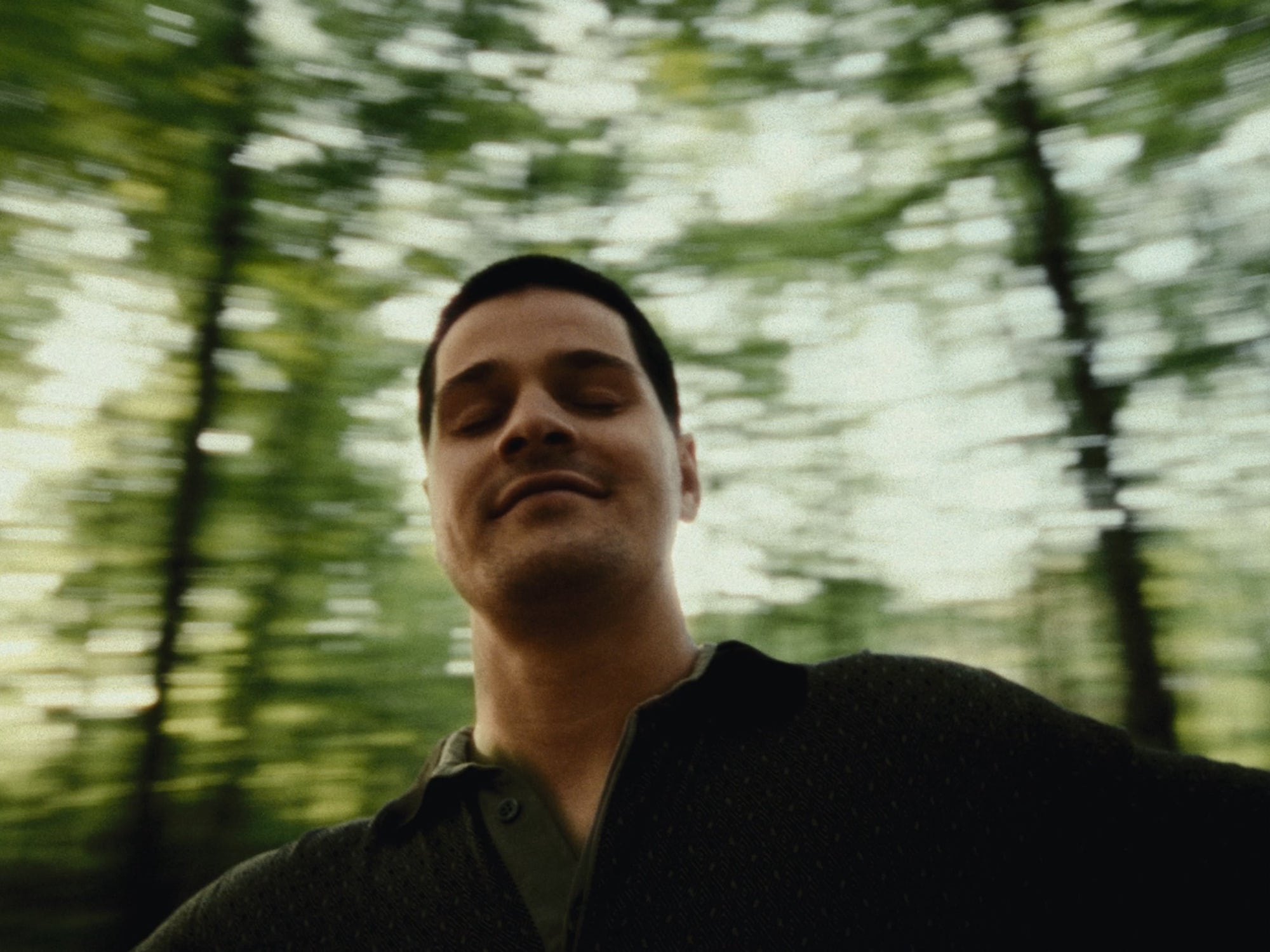 It feels like a treatment from the Victorian Age: queer men and women being put under the horrors of gay conversion therapy, which, despite various legal regulations, persists to this day in many different countries across Europe. German Director Manuel Tröndle’s Mending takes an in-depth yet poetic look at how these barbaric treatments, deeply rooted in Christian teachings, can alter the very bones of who you are, resulting in a moving and empowering film. Taking the time to avoid simplistic diagnoses and trite conclusions in favour of an enigmatic portrait of queer lives under pressure from the church, it is a rewarding experience buoyed by the powerful music of collaborators Melting Palms. DN jumped at the opportunity to talk to Tröndle about the reality of conversion therapy in Germany, making a ‘music film’ as opposed to a ‘music video’, and working slowly but surely in creating the final, devastating montage.

I’d love to know more about the inspiration for the movie. Was this something you or someone close to you has experienced?

Everything started out as a music video request from the band Melting Palms. Their singer came up to me introducing some of her ideas, which included a protagonist being freed from a cocoon. The whole album is based around the butterfly theme so early on we were just thinking about how to use the cocoon and the butterfly as a metaphor for transformation, longing and relationship, which a lot of the album’s songs talk about.

I basically took the band’s idea of a human cocoon-revelation and gave it a backstory and character. The idea immediately resonated with many ideas I already had in mind. Some came to me in a more personal way, some out of curiosity. I quickly realised that the story I had come up with needed way more time than one song, so we pivoted from the classical music-video approach to a music film that should use some selected songs from the album. 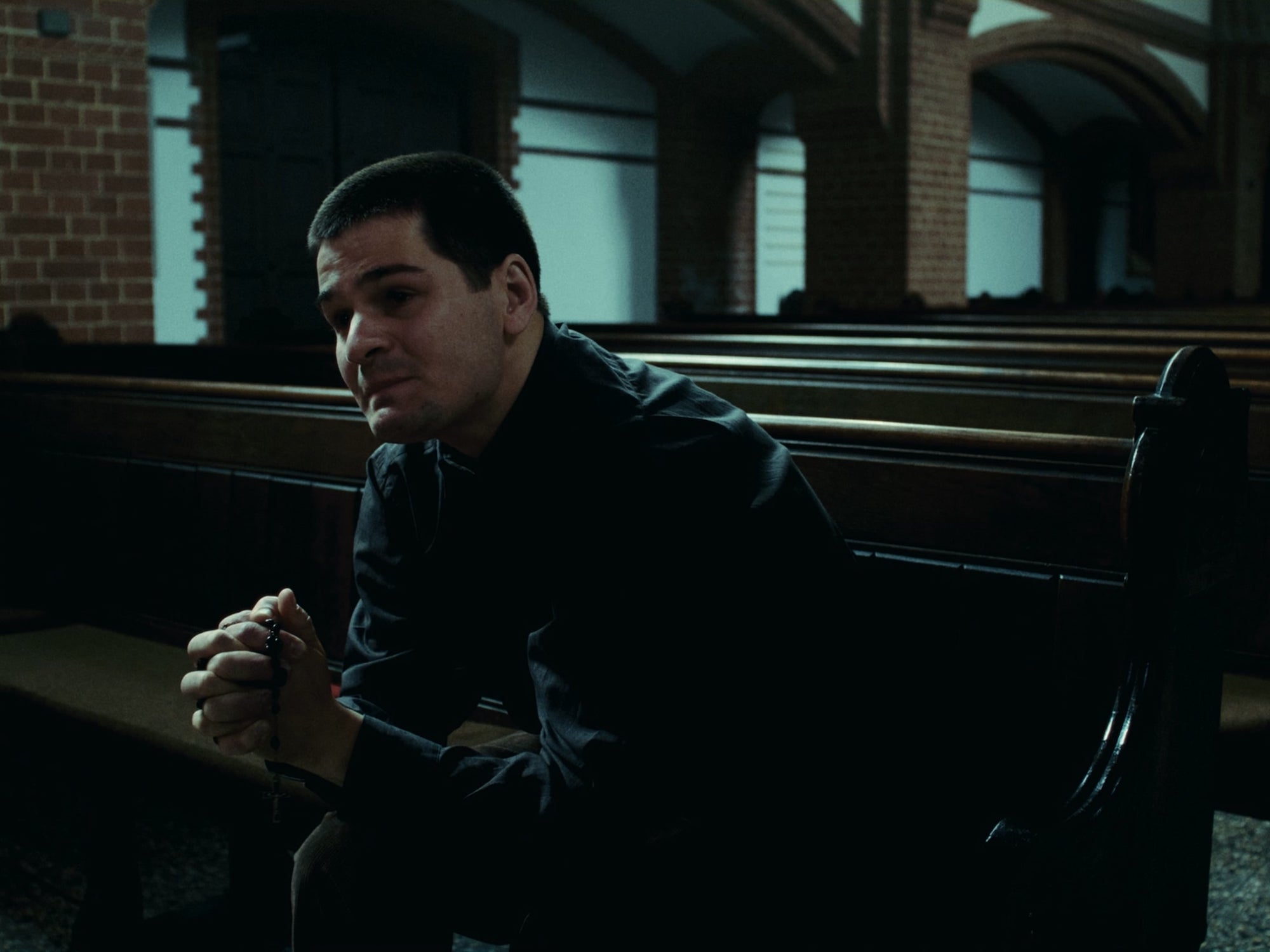 Tell me about conversion therapy in Germany. Is it still legal? How widespread is it?

Not too long ago the German government decided to ban all kinds of conversion therapy practices, which is a step in a good direction. There are still various institutions offering it unofficially, as you can read in various reports and blogs from victims. I was really shocked recently when I heard that Switzerland didn’t want to ban this so-called ‘therapy’. Victims of the procedure often suffer from depression, self-contempt and suicidal thoughts.

I basically took the band’s idea of a human cocoon-revelation and gave it a backstory and character.

The idea of the conversion-therapy came to me while talking to a friend, telling me about a close friend who experienced conversion therapy and its impact. The whole topic was so questionable to me, like is this really happening? All that led to a deep dive into the topic, which I then mixed up with some personal experiences of my past life. 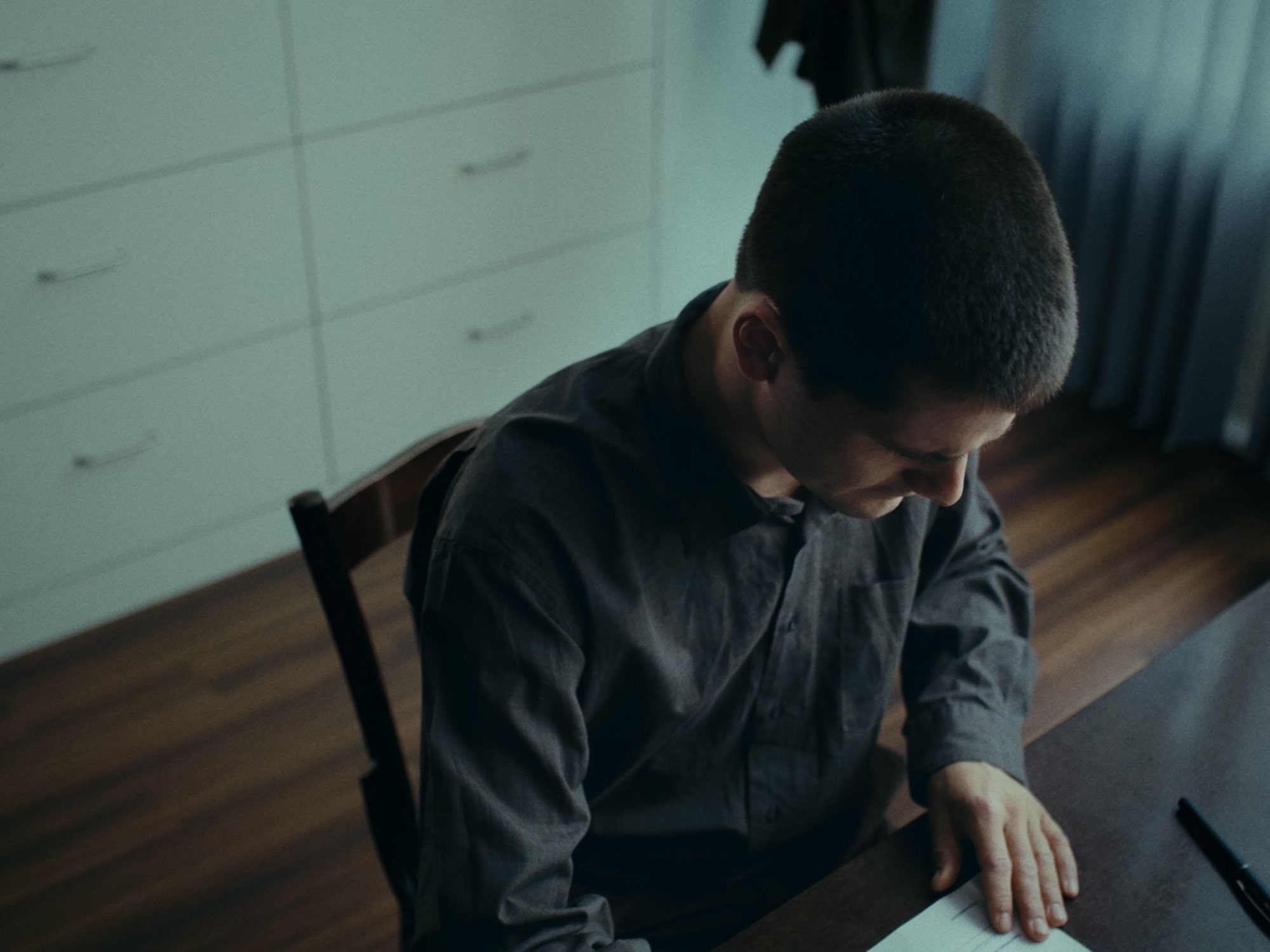 This is a student film; how supportive was your school during this project?

A big part of the above-the-line crew are friends I met not long ago in media school. But we didn’t depend on the school’s support since we all also work in production companies where we could get all the camera and lighting gear.

I love being spontaneous and adaptable to the actors behind the lens.

I felt like there was a lot of depth to the characters despite the short running time. Did you work a lot on backstory?

The most important thing was to figure out who our protagonist is in the moment, not in the past. To correctly embody the emotions of what he is feeling while going through the conflict, I wanted to talk to Wanja Neite, who plays our main character, as much as possible. I think I couldn’t have found anyone else to embody the story better than him since he is a professional actor with a queer background. Our vision of the role was very clear throughout shooting. 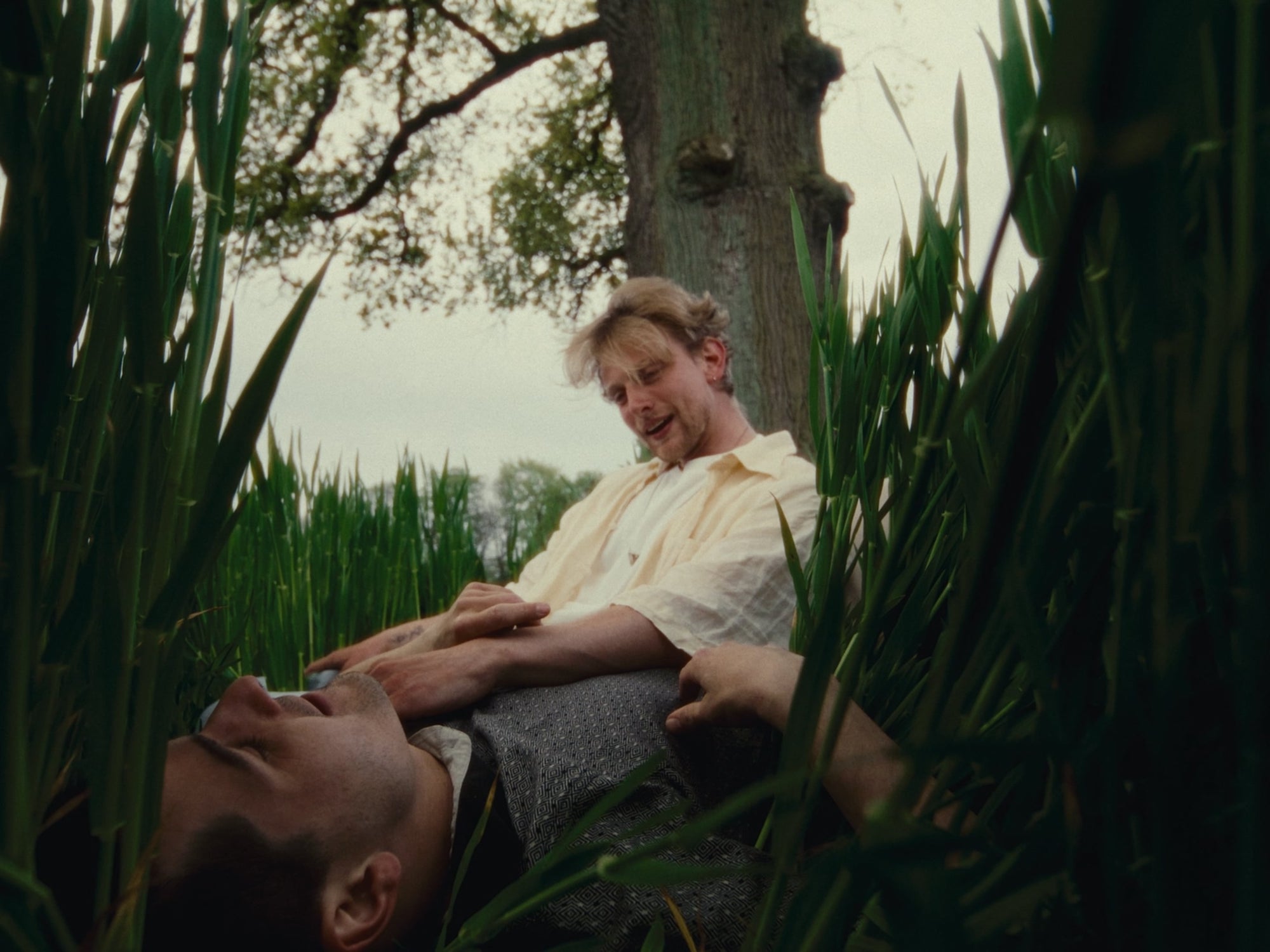 There is so much tenderness between the two men in the early stages of the film. What’s the challenge of getting that right?

I basically just made up a little love story I told them on set to really get into their roles. When they met, what their day looks like, what mood they are in. Just some basic directions. With that given they both did a great job of delivering the right amount of tender teasing.

Whether it’s pans or zooms, the camera seems to be constantly moving, immersing us deeper and deeper into the world of the character. How did you want to approach the film visually? What equipment did you use?

I love being spontaneous and adaptable to the actors behind the lens. Especially when being handheld. I think some scenes of the movie really needed that. At the moment I am constantly learning and trying to move the camera in the way that subjects are calling for it. I admire Emmanuel Lubezki’s and Jörg Widmer’s work on Terrence Malick movies for example. The film was shot on RED Gemini DSMC2 with mainly three lenses: 12,24 and 50mm Cine Primes.

What I appreciate is that there is no easy resolution to the conflict in the film, instead aiming for a more poetic approach. Was this always the vibe you were going for?

I did not want the resolution to be right in your face. For me it was important to say that the protagonist’s journey shall still go on, through unknown but hopefully more even paths. Having the courage to put the doctor’s diagnosis paper in the water, call his partner and start over with new strength and faith.

I really hope the film is a good vessel for the audience to feel these struggles for 10 minutes.

I’d love to know more about the challenges of the montage in general. Did you have to shoot extra footage to make it work? How much editing was there in the end?

As I was possessed with the film and its pre-production we had a really well-planned shooting order. We could wrap the shoot after four long days, without needing to shoot any extra footage afterwards. I put in about seven days of editing and three days of grading the film. I wasn’t too happy with the first version, but being forced to leave it on the table for several days from time to time due to working full-time during the week really helped me to clear my mind and approach the edit again with a fresh mind. 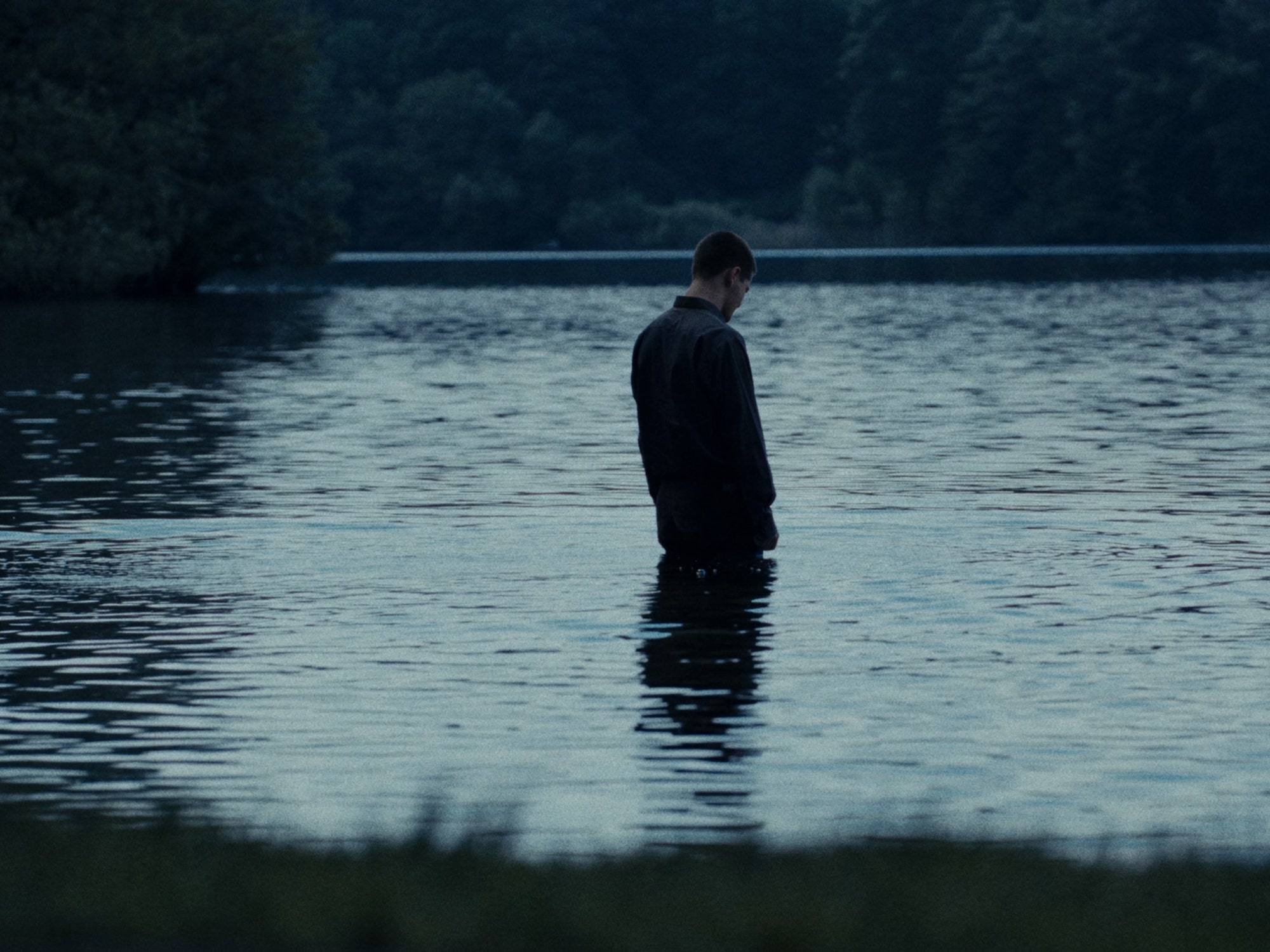 Is there anything else that you want to add?

We have witnessed increased violence against queer people in Germany. A few days ago some really bad events happened in various cities, and I never heard of so many anti-queer, homophobic incidents in such a short time before. Mending is dealing with the mental effects of non-acceptance and discrimination incidents against the protagonist.

Imagine being discriminated against and violated for who you are or who you love. For many of us that might be hard to imagine. I really hope the film is a good vessel for the audience to feel these struggles for 10 minutes, as our protagonist wanders through his troubled world of un-acceptance.

I will be finishing my apprenticeship at the end of next year, which keeps me pretty busy most of the time. I’m mostly doing smaller advertisements and corporate films as a DOP and editor. Still, there is a lot of personal narrative stuff coming up that I am working on with a close director friend who operated the underwater camera for Mending. Right now I am in the middle of shooting a short film we are creating together.