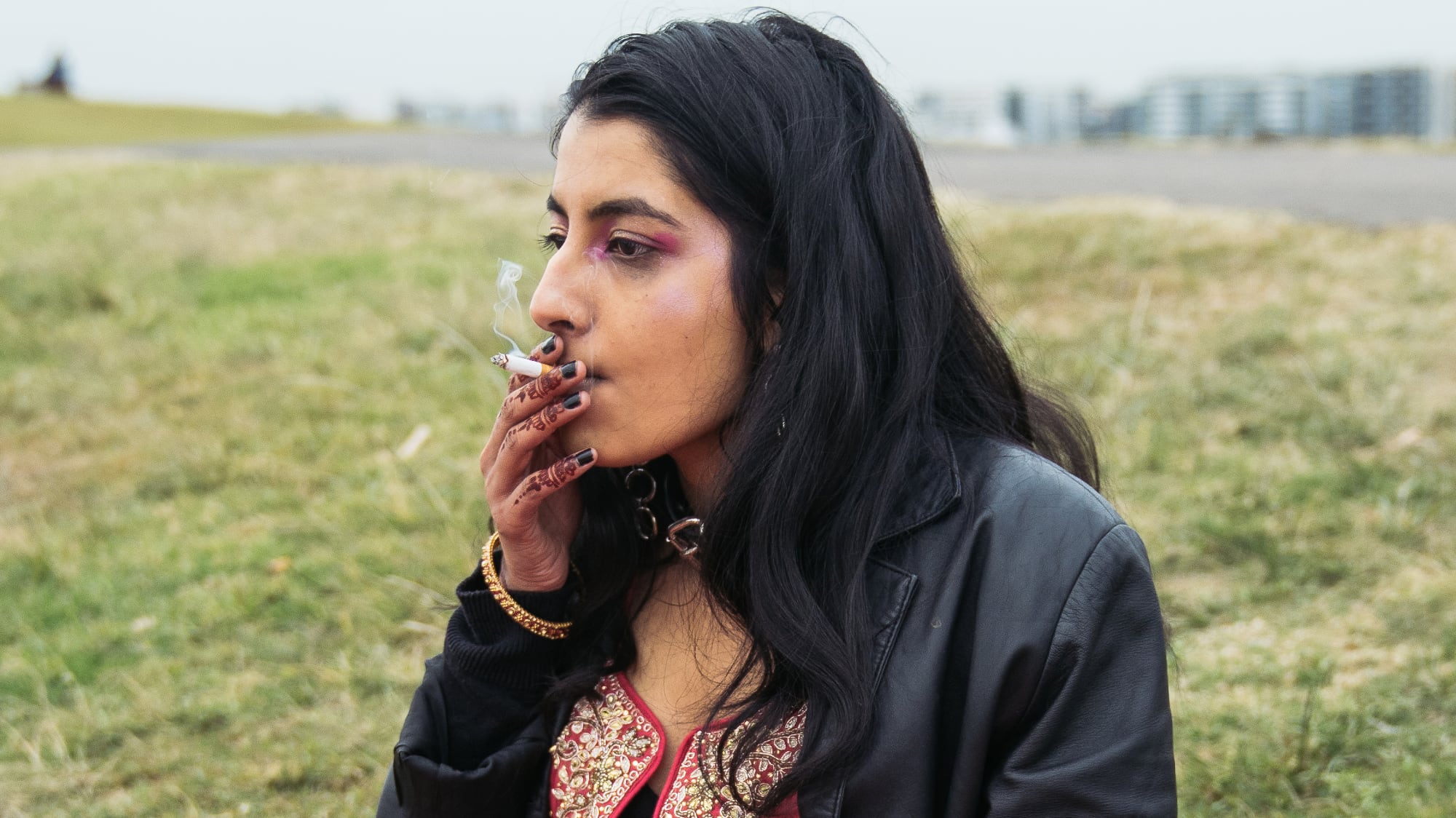 In the flush of youth, going out clubbing can be a messy, conflicting affair; filled with a maelstrom of complicated emotions, difficult to even fully process at the time. But as Victoria Singh-Thompson’s Don’t Forget to Go Home so brilliantly shows, this is a feeling that can be compounded when purposefully going against the grain of tradition. For the young Fijian-Indian-Australian Aasha, this means escaping from her cousin’s wedding and attending a rave downtown. And through a variety of intuitive narrative choices, granular details and smart costuming, we get a true sense of the shackles of tradition being thrown off in favour of genuine exploration and self-expression. The final result is a touching ode to coming-of-age against the backdrop of familial expectations. We sat down with director Singh-Thompson to talk about avoiding the clichés of the genre, how she pulled off the film’s mesmerising club sequences and mixing Indian with Western details.

– The following interview is also available to watch at the end of this article.

In the submission description, you wrote that this is a world “you can’t shake.” Did you feel like this was a story you needed to tell as opposed to one you just wanted to tell?

I noticed that my experience of coming-of-age was different to what I saw depicted in the experience of my family and my cousins, in the sense of balancing two different, extreme worlds. When it came to making films, it was just something that I really wanted to see depicted on screen and something that I had a real burning desire to put into the collective consciousness and Australian storytelling. It was really from a place of wanting and needing to speak to how one can be between worlds. I know that is almost a cliché but I think that’s just so important for a second-generation migrant experience.

I never wanted it to feel like it was better than the other. I just wanted it to be a place of seeing it for what it was. The ride of that and taking it on a journey. So when I started going to parties and stuff, the juxtaposition was something I could never shake.

It was really from a place of wanting and needing to speak to how one can be between worlds.

This is one of the first stories that’s telling a Fijian-Indian perspective in Australia. Australia had a massive influx of immigrants in the 80s and 90s, but I don’t see these perspectives in the national cinema. Do you feel like this is a perspective that is perhaps lacking?

One hundred per cent. I think that comes from a class disparity. A lot of these immigrants didn’t have the freedom to pursue filmmaking, and it’s only now that the next generation is able to do this off the back of what our parents have done. But I think that even now it’s really not seen as much as I need or want to in the current industry. I think that comes from a lack of support and understanding. That’s even down to the film school level because a lot of people end up dropping out and not making the stuff that they want to be making. But I feel like things are changing and there are people making things outside of the dominant culture here. 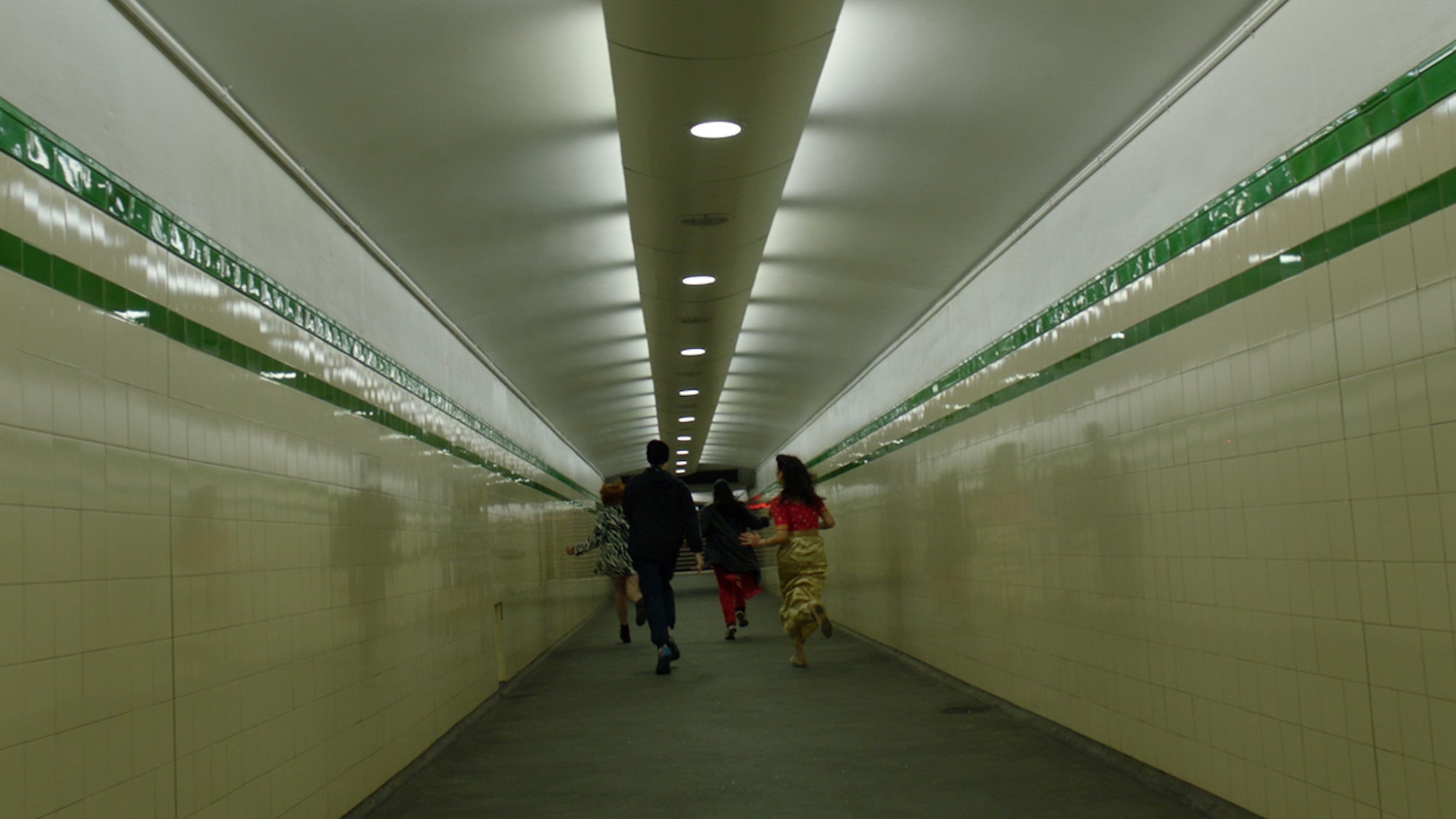 I love the way that it opens with music from the wedding but we don’t see the wedding itself. We just see Aasha running away. Was it important to have this in the background while your hero is in the foreground? Tell me about the way you decided to frame that opening sequence?

I feel like weddings themselves are such joyous occasions. I wanted to show that her focus isn’t there at all. It was really important that the film started with her just leaving it and leaving it ambiguous as to what may have happened. I knew that if it was visually on screen it would’ve taken away the audience’s attention from her journey so I wanted to start with her escaping.

It was just something that I really wanted to see depicted on screen.

This sense of energy and the contrast between cultures is well-expressed in the opening needle drop, which is a high energy dance song with an Indian flavour to it. What was it like finding the right music for that moment?

That song was about shiva and sort of entering the darkness and the dance. I needed the lyrics to relate to the story and also mesh the cultures. I really love Indian EDM so that was important to me as part of the soundscape and as a precursor to what’s going to happen as well. 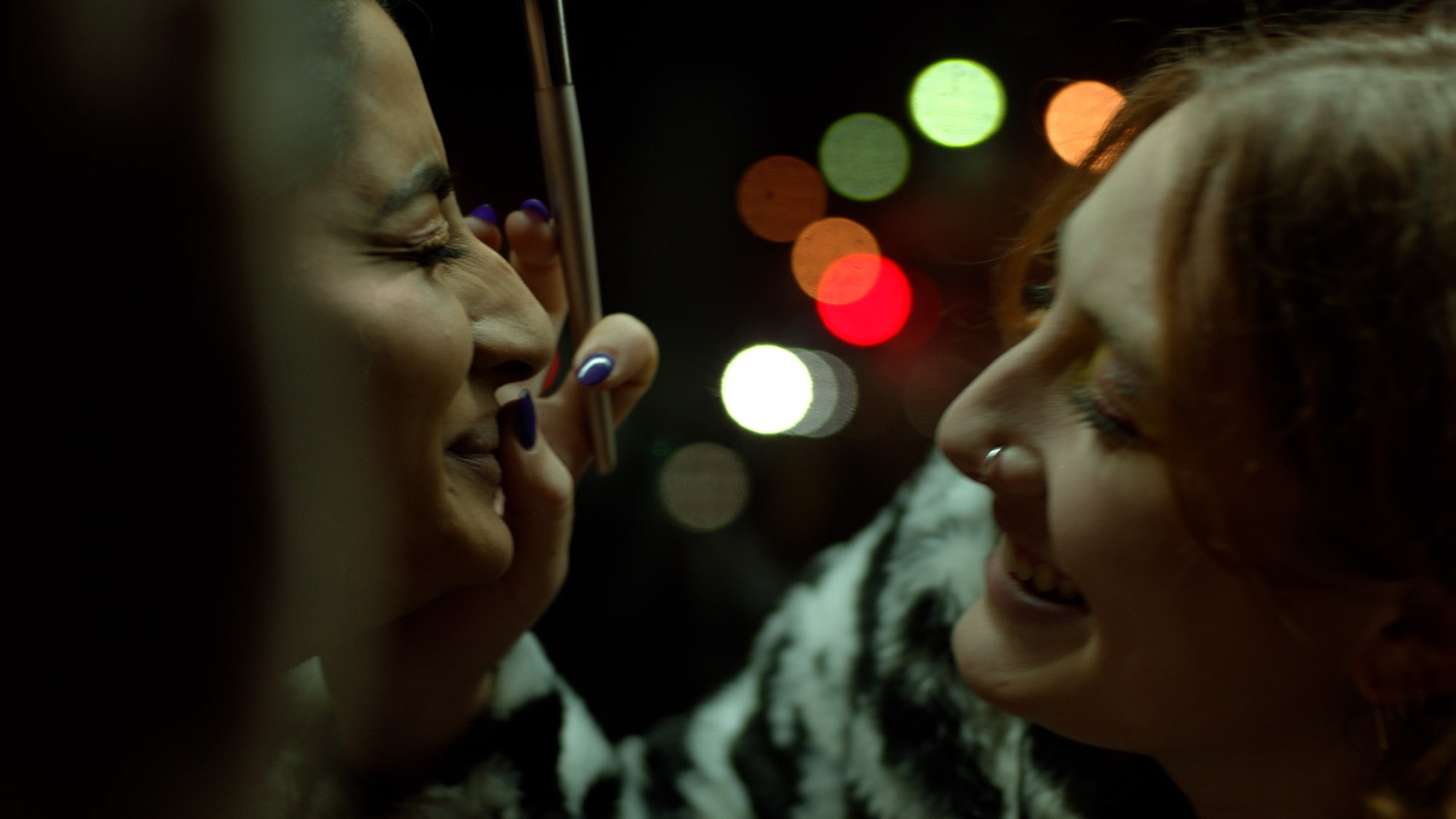 And there’s this amazing contrast between what the two sisters wear with their traditional saris and then the clothing of the friends, which is more hipster-ish, for example, the fishnet tops. What was the challenge in costuming?

I kind of had such an idea and vision for it that I never got a stylist myself. I just did all the costumes myself. I think clothes are such an important way of expressing one’s identity. Then I wanted to play with it with Aasha taking off her coat and them changing their costumes on the train. I think it’s important that people give away themselves with what they wear. And that’s really important for coming-of-age where people experiment a lot with clothes. It was just a very quick visual way to express the themes of the story through costumes.

I think clothes are such an important way of expressing one’s identity.

What I find on a night out is that the pre-drinks are often more fun than the night itself because there is this amazing sense of anticipation; anything can be possible. What was it like trying to capture that feeling in the film itself?

I wrote a little paragraph about what they were doing on the train, but most of that was just improvised by the actors, giving them tasks to do and playing with the props. Then with the extras on the train, just playing with them, and just capturing all the silly things you do at that age when you feel like you’re at the centre of the world. I wanted them to take over the space a little bit and at the same time bring out the dynamics between them.

Then they finally reach the nightclub itself. What were the logistics of shooting in a nightclub and making it look authentic? I loved the strobing effect you had. Was it hard to pull off?

For the rave scene, we decided to have different colours for different moments and different lighting effects as we journey through it, as it’s all so non-verbal. I think we had a sky panel or an LED with a dimmer that went in and out. Then in the edit we could cut to black and decide. You can cut between the takes because it’s fading in and out. For the freeze-frame strobe moments, we did a technique where we slowed it down to like 100 frames a second, but we also got people to do freeze frames at the same time. So it was a combination of frame rates and lighting and also blocking people in order to create those effects.

I think it’s important to show the realities: it’s an extreme physical space.

There are so many films about clubbing that make it into this clean and transformative experience. The ecstasy hits and the clubber is immediately a brand-new person. But Don’t Forget to Go Home shows the messiness with the kissing scene. Was it important to show that it can have highs and lows?

I feel that it was really important to show that partying isn’t just about getting to the dance floor and it’s all great and wonderful. I feel there are dynamics within the dance floor. If I could go back and shoot it again, I would probably bring that out even more, exploring the sort of things that can suddenly turn it into a really not great night. I think it’s important to show the realities: it’s an extreme physical space. 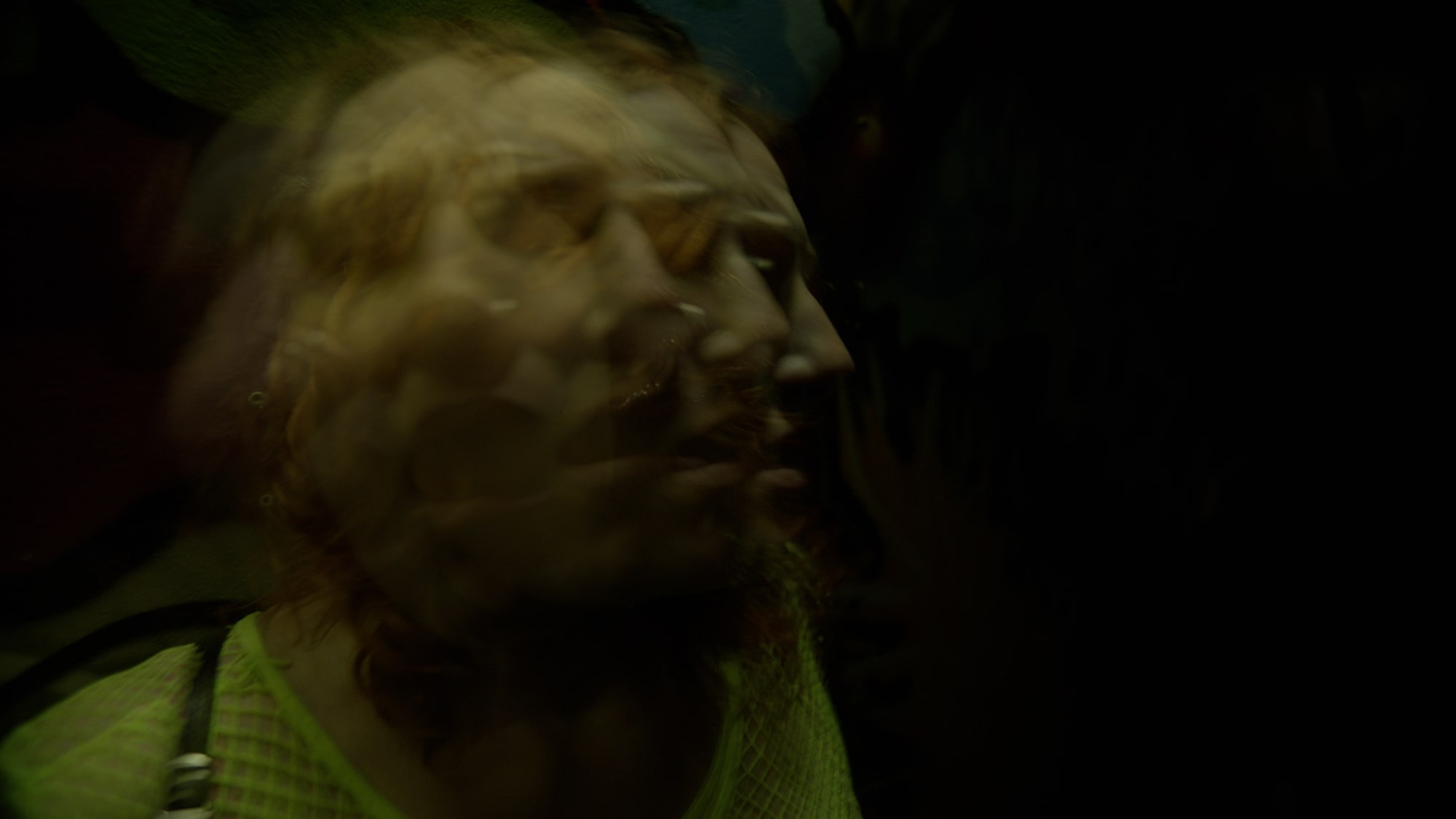 You end on a cliffhanger. What happens to Aasha when she comes home?

The reason I didn’t want to show it is because I didn’t want to turn it into a complete angry Indian mother stereotype, even if the reality is that they would be in trouble. In my head a few more things happen before forgiveness is achieved. I feel like the journey is still continuing, but I feel it’s up to the audience.

I’m working on a short film called Teacher’s Pet. It’s sort of a spiritual adaption of Lolita but set in a Catholic all-girls high school about a young girl who has a crush on her teacher but begins to unravel and dissociate from her surroundings and you begin to question whether she’s actually being groomed. So it’s sort of a film that’s going to be an experiment into how you depict disassociation on screen from a child’s point of view. It’s kind of dark but I’m really excited about that one.