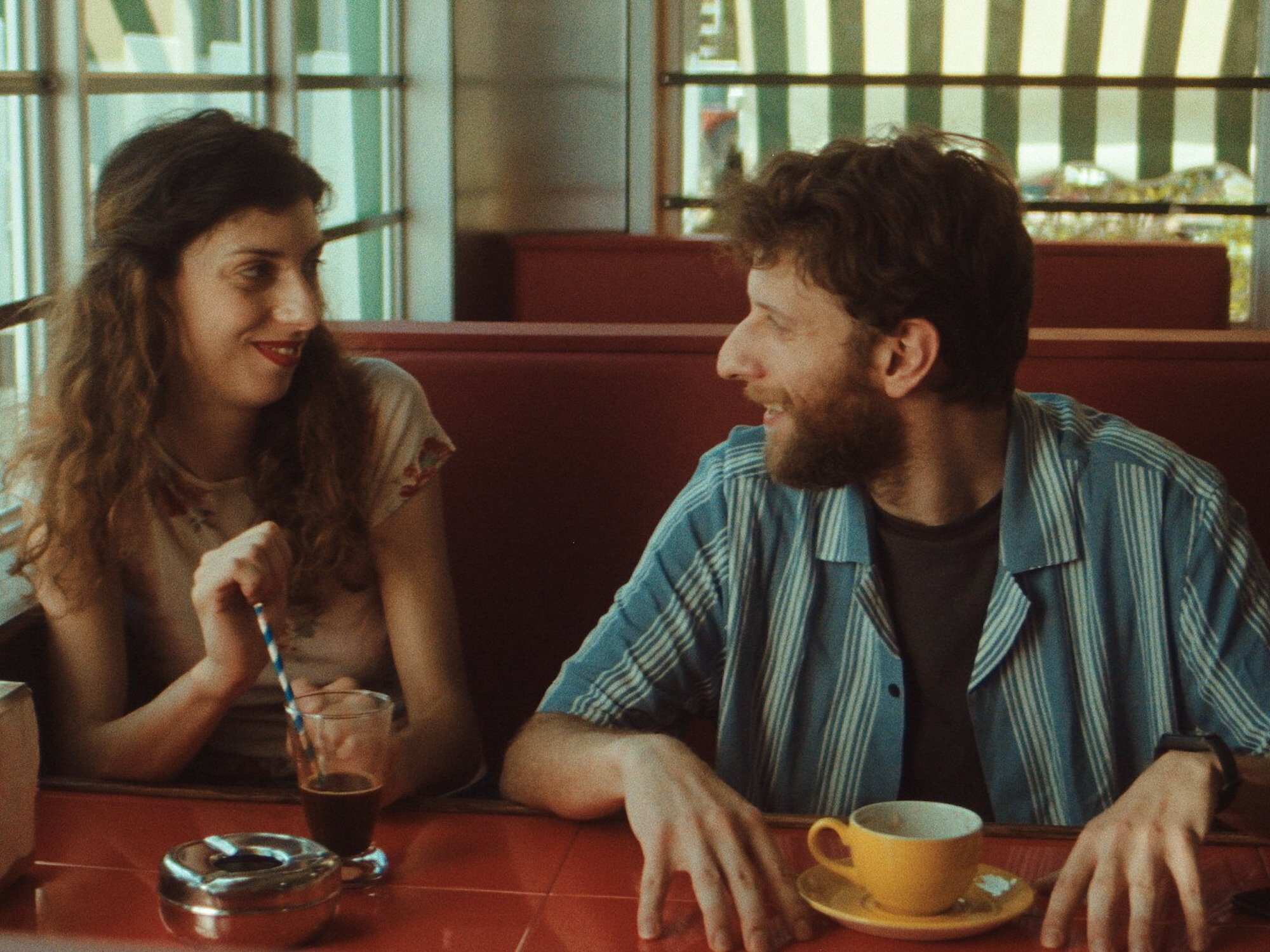 Reminiscent of the playful romcoms of recent years, Dimitris Tsakaleas and Lida Vartzioti’s Happy Ending is another heartwarming look at the awkwardness of love in the modern age. What struck me most upon watching Tsakaleas and Vartzioti’s film for the first time was the performances of their lead trio. There’s an honest and truthful clunkiness to their interactions which gives the film a rawness, allowing you to connect with them as people as opposed to characters. It turns out, as you’ll read in our interview below, that Tsakaleas and Lida Vartzioti were heavily inspired by mumblecore in their construction of the film’s dialogue. That approach combined with its gorgeous textured anamorphic look makes Happy Ending a cinematic delight well worth watching. DN is excited to premiere Happy Ending online alongside a chat with Tsakaleas and Vartzioti where they talk about the American romantic comedies that inspired them and the challenge of making the film’s dialogue as honest as possible.

What interested you in making a story set around dating and finding love?

Happy Ending is an ode to first dates. Now more than ever, people meet through dating apps. It has completely changed the dynamics of first dates and the expectations we have from them. We were interested in exploring this ever-growing anticipation of two people meeting in person for the first time after already interacting virtually, who seem to start off on the wrong note but progressively come together through a common ground in films.

Were you influenced by any romantic dramas or comedies?

As we were growing up, American romantic comedies really shaped us, to wait for the perfect date or eternal love. Happy Ending is an ode and kind of a satire of the American romantic comedies’ archetype: Boy meets girl and they live happily ever after. We added the role of the waitress, who is breaking up in the middle of the ‘ideal’ first date, to add a realistic tone to the classic American model of these first dates that we were watching as we were growing up. These three characters are depicting how we feel in this never-ending cycle of dating, with the ups and the downs, the fun, and the more dramatic parts. 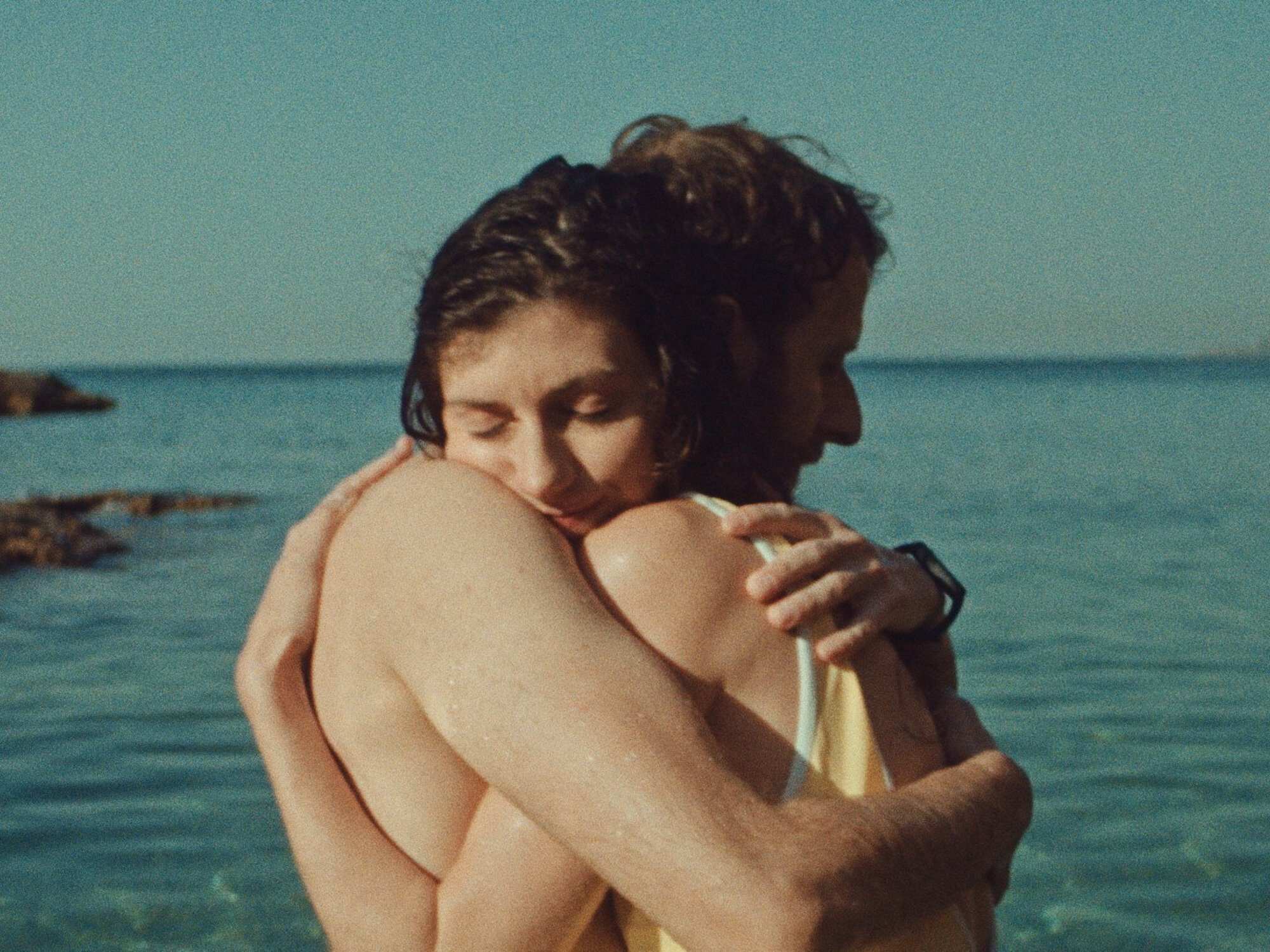 One way in which you play with conventions is the genuine awkwardness of your characters. How did you set out to stage that in the film?

In our filmography so far, we are portraying coming-of-age pains or discussing themes that people in our age are dealing with. Dating apps are a big part of how we meet and flirt, and first dates can be even more awkward since you haven’t seen the person before, but you had a first digital interaction with them. We had decided, along with our Cinematographer Pavlos Lygouris, that the most perfect setting for a first date is at night time, so it would be funny to set the whole thing during daytime. In that way, we could visualize the awkwardness of that first interaction between these two people.

The combination of a diner set in the middle of nowhere and being daytime helped us to enhance the atmosphere of the awkward date (i.e. meaning even lighting-wise things are looking less ‘sexy’). Also, we thought the two of them being on a first date, alone, in the middle of nowhere would make them even more awkward, vulnerable, and exposed to one another, as if they cannot hide their silences and all the ‘wrong’ things they say.

Happy Ending looks lovely and textured which, again, plays with the conventions you mentioned earlier. What equipment did you use to achieve the visuals?

Along with our Pavlos, we decided to shoot the film with Blackmagic Pocket 4K and we used only one lens, the Cooke Anamorphic 25mm. We were working on a very limited budget, so we had to think smart.

We were aiming for a film aesthetic on screen, to balance the digital aspect of the story.

We wanted to experiment with using one lens for the whole film, for it to have a certain, same look during the whole duration. Our initial thought about how the story would look was to have the essence of a memory, something that has already happened, the feeling of seeing a postcard from the past. Since narrative-wise, the date happens in a very digital way, we were aiming for a film aesthetic on screen, to balance the digital aspect of the story. Lastly, the natural lighting and shadows, the influence of American scenery and the diner aesthetic were influenced by photographer Arnaud Montagard and his monograph The Road not Taken.

How long were you shooting for in and around the diner?

We shot the whole film in three days but actually, it was two and a half days of shooting. During our shooting days there was this extreme heatwave in Athens that was almost unbearable. The diner where the film is taking place, is in the middle of nowhere, and with the heat we were working in, the environment was suffocating. Along with our actors Fragkiski Moustaki, Nikos Papadomichelakis and Katerina Mefsout we decided to take advantage of this environment and put it on the screen!

We improvised with the actors a lot and many decisions were made on the spot. We worked through lots of rehearsals with the three characters, so during shooting we knew the characters well and could try lots of things between takes. One of the main reasons was that we wanted the dialogue to feel as real as possible. We really love mumblecore romantic comedies so Happy Ending is paying a lot of respect to the mumblecore genre. Our favourite mumblecore moment of the film is the conversation about Stellan Skarsgård. This was a one-take scene and we knew we had our film when we saw that take.

Given the receptive nature of the filming I imagine the edit was crucial in achieving the tone you were setting out for. What was it like constructing everything in post?

We worked closely and for a long period of time with our Editor Stavros Symeonidis, trying to find the perfect tone for our awkward romantic comedy and the rhythm of the film. Stavros was a key factor in shaping the story and finding the perfect balance of humour and drama. It was challenging to connect the pieces of the date in order to create this feeling of a repetitive date or all the different versions of the same date.

What is your working relationship like as co-directors? Do you each take on certain roles or are you constantly collaborative throughout the filmmaking process?

We actually like to refer to ourselves as directors or a directing duo, we don’t like the term co-directors cause we don’t feel the unity in the word. We do everything together from casting, working with the actors, collaborating with the cinematographer and the art department, working really closely with the editor, etc. For us, whatever ends up on the screen is the result of a discussion that lasts many months or years. That’s why we enjoy doing it so much, it is like therapy! It’s such a collaborative experience throughout the whole filmmaking process and it’s of course hard but it’s really rewarding at the end.

For us, whatever ends up on the screen is the result of a discussion that lasts many months or years.

We both know we can do the directing thing alone but we enjoy this unity of creating all these worlds together. Each of us bringing their own experiences, thoughts, and imagination and also being there for one another in its highs and lows is something that we really like during the process of creating a film. Making something that blends parts of each other and in the end, it is us as a whole. We are like a couple and brother and sister at the same time; all this energy comes out in filmmaking. We really enjoy it.

Right now we are finishing our next short film called Good Girls Club: A Virginity Odyssey in which we follow two female best friends who are throwing a party in order to both lose their virginity and at the same time. We are also in the early financing stage of our feature film but let’s not say a lot about it yet in order to create some mystery!