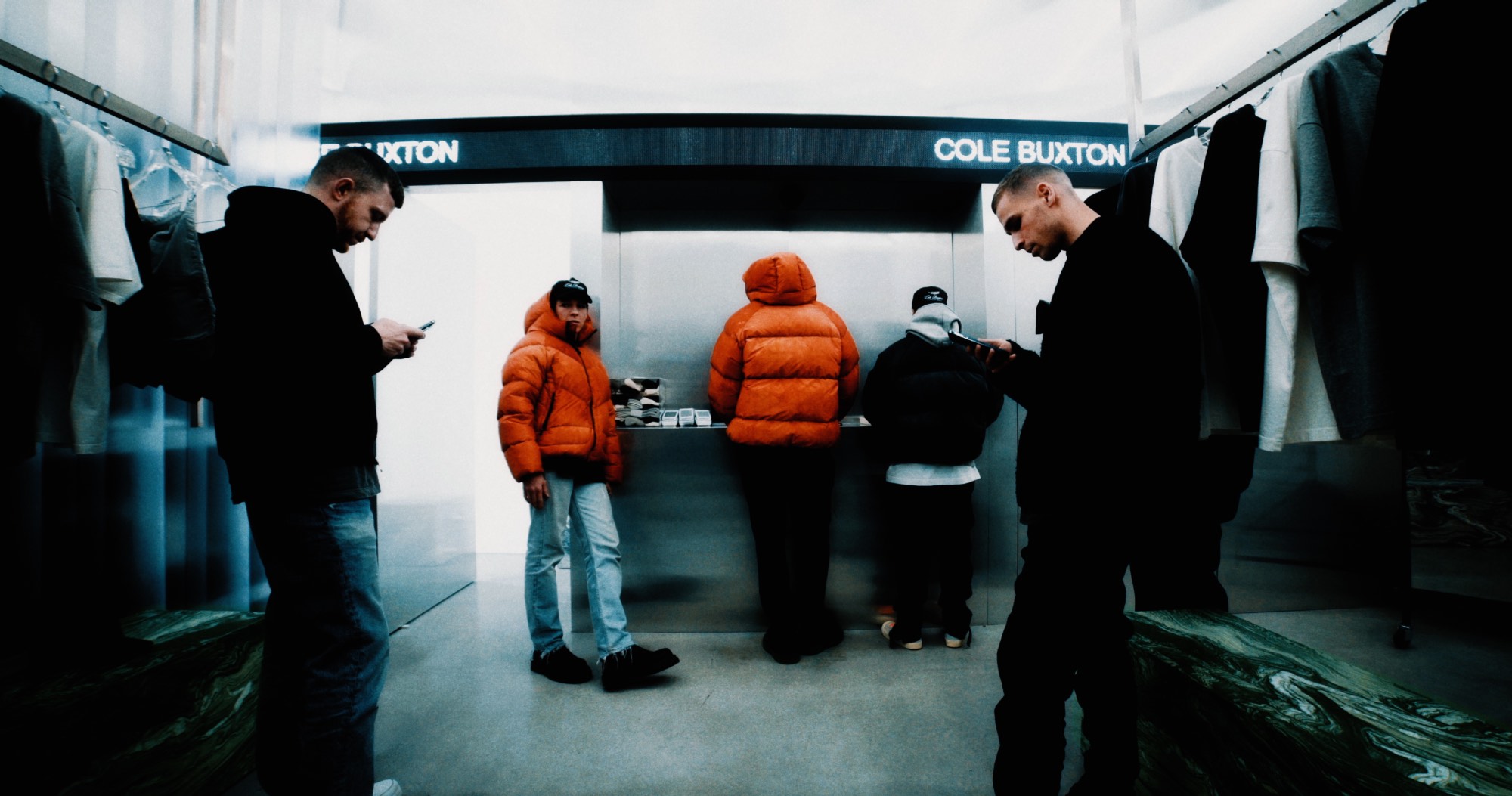 The Reids return to Directors Notes with a follow up to their insightful and thrilling documentary Cole Buxton: CB52, which chronicled the 24/7 graft that went into the opening of fashion brand Cole Buxton’s flagship store. This next instalment, titled Cole Buxton: Still Here, is a look at the business over a year on from the opening of the store and the sudden all-or-nothing challenge the brand faces in the run up to their biggest retail day of the year, Black Friday. Unlike other fashion brands who may want to present an idealised image of themselves for their consumers, Cole Buxton pride themselves on transparency and this is what The Reids are so excellent at capturing through their singular docu-fiction brand of storytelling. DN joins the co-directors to discuss their return to the world of Cole Buxton, the adaptive nature of honest documentary filmmaking, and the challenge of pushing the visual ambition of their work even further.

How did you set out to differ Still Here from your first film on Cole Buxton, CB52?

Following on from our first film with the brand CB52, Still Here deals with more complex narrative themes that we hope will resonate with a lot of business owners and creatives alike. CB52 is a purely aspirational film: the journey to the climax where Jonny and Cole pull off the opening of their flagship store was an optimistic and exciting one, their faith in achieving that dream was never tested. Still Here, however, is what it looks like when faith is tested when there is a legitimate risk that everything you’ve built could fall apart.

We threw the original plan away to chase the reality of what was unfolding.

At what point did you hear from Cole Buxton about the challenges they were facing in the run up to Black Friday? Were you always going to be making a film together about that moment?

When we began shooting the as of yet untitled next project with Jonny and Cole, we were expecting to come back and check in on them a year on from opening the store to find them thriving and enjoying their new reality, it was going to be a highlight reel of sorts, CB52 Part 2 about their new day-to-day lives in Soho…But then something far more interesting started happening. The business started hitting extremely troubled waters and we were right there. We threw the original plan away to chase the reality of what was unfolding. This ended up being a far more truthful and sincere story about the realities of growing a business in some of the most economically turbulent times the world has ever lived through.

The nature of a fly-on-the-wall doc is to absorb everything that’s going on and then find your film in the edit. What have you come to realise this film is about?

We think it has really become a film about the weight of living your dream: it takes a lot to remain worthy of these accomplishments. We see Jonny and Cole working extremely hard to keep things moving in the face of both expected and unexpected adversities. Gone is the dreamlike quality of CB52’s achievements. This is gritty tough work, long hours, no sleep.

We really wanted to push the visual ambition of this film as much as possible as it really enhances the story we’re telling.

Did much change in how you wanted to approach capturing Cole and Jonny this time around?

It became clear not long into filming that this one was a different beast and had a lot to say so we actually approached the making of the film more like a drama fiction than a documentary. We’d started to develop this hybrid docu-fiction style in CB52 and with Still Here we refined this approach even further as the subject matter of the new film lends itself to more dramaturgy. We really wanted to push the visual ambition of this film as much as possible as it really enhances the story we’re telling. This approach led to us using our coverage to construct scenes that conveyed as much information as possible on screen, again in a bigger way than before as we had at least two or three cameras running at all times on Still Here compared with CB52’s one camera setup. Without breaking the immersion by using documentary tropes like talking heads for exposition we believe will keep people rooted in it for longer.

We are fiction directors first and foremost and we strongly believed that telling the story this way would be more engaging and give it a unique edge. The elements we did borrow from documentary, mainly the use of voice over, afforded us the ability to have Jonny and Cole recount their story in their own words, providing emotional insight and narrative context.

CB52 was such a unique beast, as is Still Here. It’s rare to have such an in-depth look at the trials and tribulations of building a fashion brand. How do you see your work, and these two films, fit into the landscape of fashion brand filmmaking?

We’ve noticed since the release of CB52 a drastic increase in fashion brands putting out content beyond the short Instagram reels and TikTok videos, as the consumer appetite and the business requisite for ‘content’ is at an all time high. Brands need to produce a constant stream of it to retain visibility and boost engagement. Daily vlogs and short behind the scenes documentaries are becoming more popular now as the current consumer expects a form of authenticity and transparency, people really do want to see how their garments are developed. However, most of these longer form bits of content serve as adverts for the brand and from what we’ve seen, never show the true grittiness of how hard it can get when everything is going wrong. It appears that a lot of brands don’t want this transparency to compromise their image. They portray a sexy 24/7 grind, but never the ugly graft. We didn’t want to make content, we wanted to tell a good story.

Was that one of the most important aspects that attracted you to make this film, conveying the honesty of Cole Buxton’s experience?

Honesty is paramount in good storytelling and you can’t have honesty without transparency. The brand could’ve cut out Jonny loosing his temper on the phone to suppliers or Cole himself having to check measurements on thousands of garments after production errors at the factories, but didn’t because it was important to the truth of the story. Jonny and Cole led this. They wanted to make sure the film was as warts and all as it could be to offer a transparency not yet seen in the business and fashion documentary genre as well as show other aspiring brand owners and designers what it takes. There was no point making this without being transparent. This isn’t a propaganda film for Cole Buxton.

We didn’t want to make content, we wanted to tell a good story.

You premiered the film in April, how has the reaction to this been compared to the first one?

We’re so glad to have come back to make this second film and are thrilled it’s now out and has already been seen by so many people. It was an immense production for the two of us, we were the entire crew on set: shooting, running sound, lighting, directing where needed. But the nimbleness paid off as we wouldn’t have been able to make this film any other way, a bigger crew would’ve slowed us down, been a distraction to the Cole Buxton team. The support and eagerness from both Jonny and Cole to have us everywhere they went meant we had amazing access to what was going on at all times which led to capturing some of the most intense and personal moments in the film, like the Black Friday stock meltdown or Jonny on the phone to his mum.

What kit were you using this time around that allowed for that nimbleness?

We shot the film on Sony Alpha cameras, the A7sIII primarily. These made the entire thing possible. They’re so small and powerful yet have full frame sensors that produce amazing images that looked phenomenal on screen at the Prince Charles Cinema in Leicester Square where we premiered the film back in April, especially after our dear friend Phil Hambi, senior colourist at The Mill, added his polish to the grade. Coupled with the amazing score Louis Grace composed for us and the Hollywood-grade sound design from Timo Säila, we ended up with a film that felt much bigger than the sum of its parts that we’re tremendously proud of. We can’t wait to find the next big project to get to work on.

What can you tell us about the future for yourselves?

There are a few short fiction films in development and some ideas for another documentary too. But for now, enjoy Still Here. We’ll be releasing the score as an EP too soon as that deserves to be appreciated in isolation!