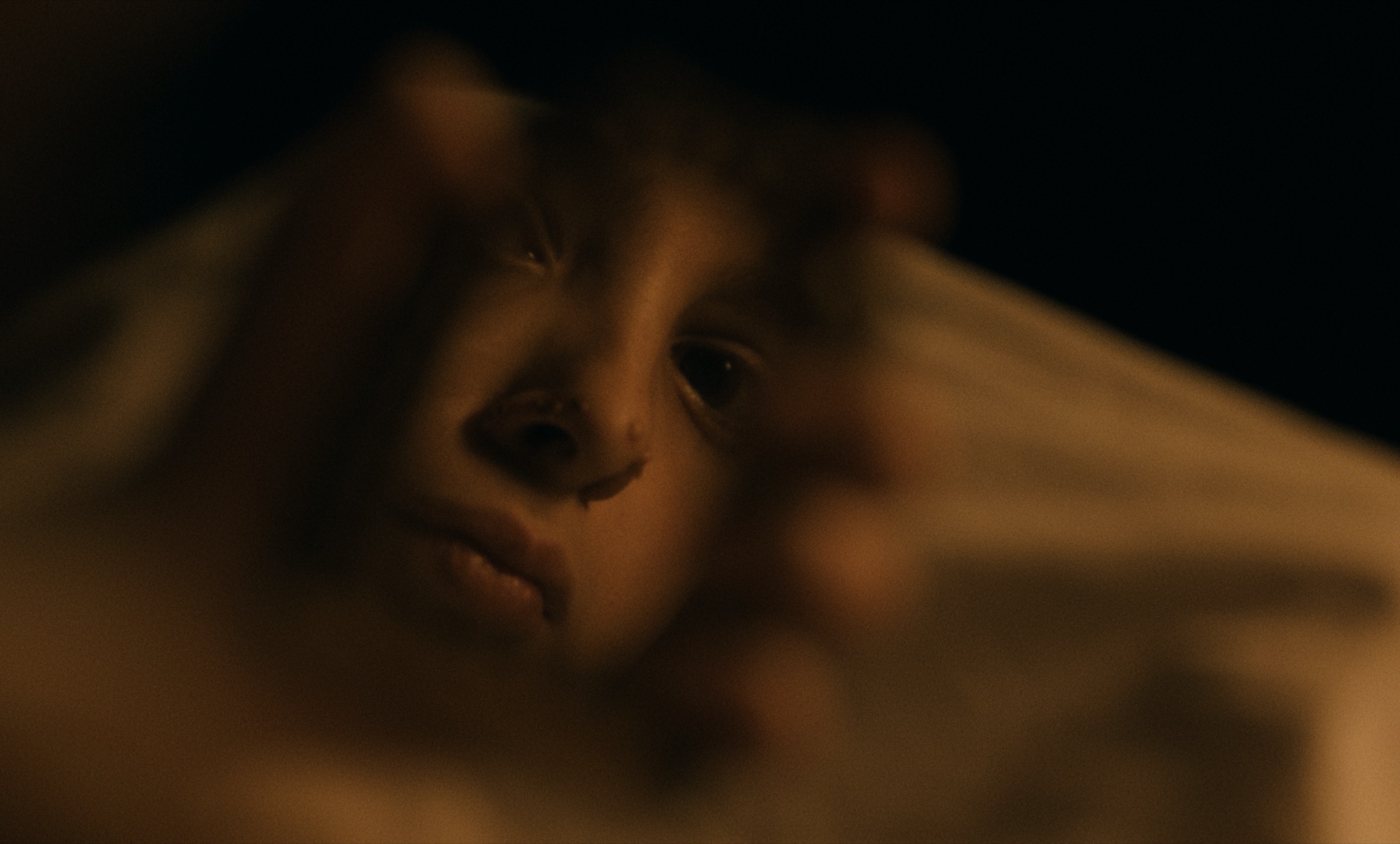 A supernatural horror rife with family ambiguity, anger and self-discovery, Sarah Lasry’s Spell on You (La Verrue) sees the Paris-based director take the confusion and rage of her childhood and combine it with the companionship she found in the world of witches and spells. It’s a narrative which empowers her young protagonist who after being initially horrified by the warts on her nose, through them, learns to harness her own unearthly powers. Lasry explores adult themes beyond the grasp of children yet glimpsed through forbidden keyholes and cracks in doors, and unlocks the freedom of self-expression through powers unknown. Spell on You is a creeping dark burgeoning of power where the adults do not rule and an ominous presence is felt right from the seeming normality of the opening scene through to a crescendo of unbalance in its final moments. Ahead of today’s premiere, we sat down with Lasry to discuss the tonal palettes used to represent the film’s emotional threads, a childhood inquisitiveness which inspired the creaky corridors and the lead role the score played in shaping the film on set and in the edit.

Spell on You is born from your childhood experiences, how did you bring your lived history into a horror fuelled cinematic form?

I grew up with witches through storytelling, films, and books. Snow White, Hansel and Gretel, Roald Dahl or The Wizard of Oz were founding figures of my childhood unconscious. When I had warts on my nose as a child, I definitely associated myself with those monstrous, terrifying women. As I was writing the film, I realized that Salomé, disgusted by her warts at the beginning of the film, needed to learn how to reclaim them in a certain way and see them as empowering forces. I, in turn, as a writer, needed to re-examine the figure of the evil witch I grew up with, to see it through the lens of feminist counter-culture. The film became the story of a young girl discovering she is a witch through her rebellion against her family, and finding strength through her strangeness and difference.

Before filming I read an interview with Polish filmmaker Krzysztof Kieślowski where he says: “That’s what I’m most interested in: how to show what is hidden, how to reveal what we hide to others, and what we hide from ourselves. It’s a question that we’ve asked ourselves from the beginning of humanity and it’s the only real question because it has no satisfying answer.” I kept that quote as a sort of mantra during the shooting.

How did you take that quote from Kieślowski and channel it into your personal capturing of the film?

I think it had a lot to do with atmosphere, I wanted the audience to feel what Salomé feels. She’s in an ominous environment where something is off. It’s definitely a film about adult denial and I think Kieślowski’s quote evokes that for me. What’s interesting is that I think children, to a certain extent, instinctively need to discover what adults try to hide from them. As a kid, I was always spying, going through letters and diaries, because I could feel my parents were trying to hide something from me and I wanted to discover what that was. From the very beginning of the writing process, I was obsessed with the idea of finding a long corridor that Salomé would have to cross at night to go observe the adults. I kept having visions of open and closed doors, lights coming from under the doors and filming bedrooms as mysterious, forbidden, intimate spaces. 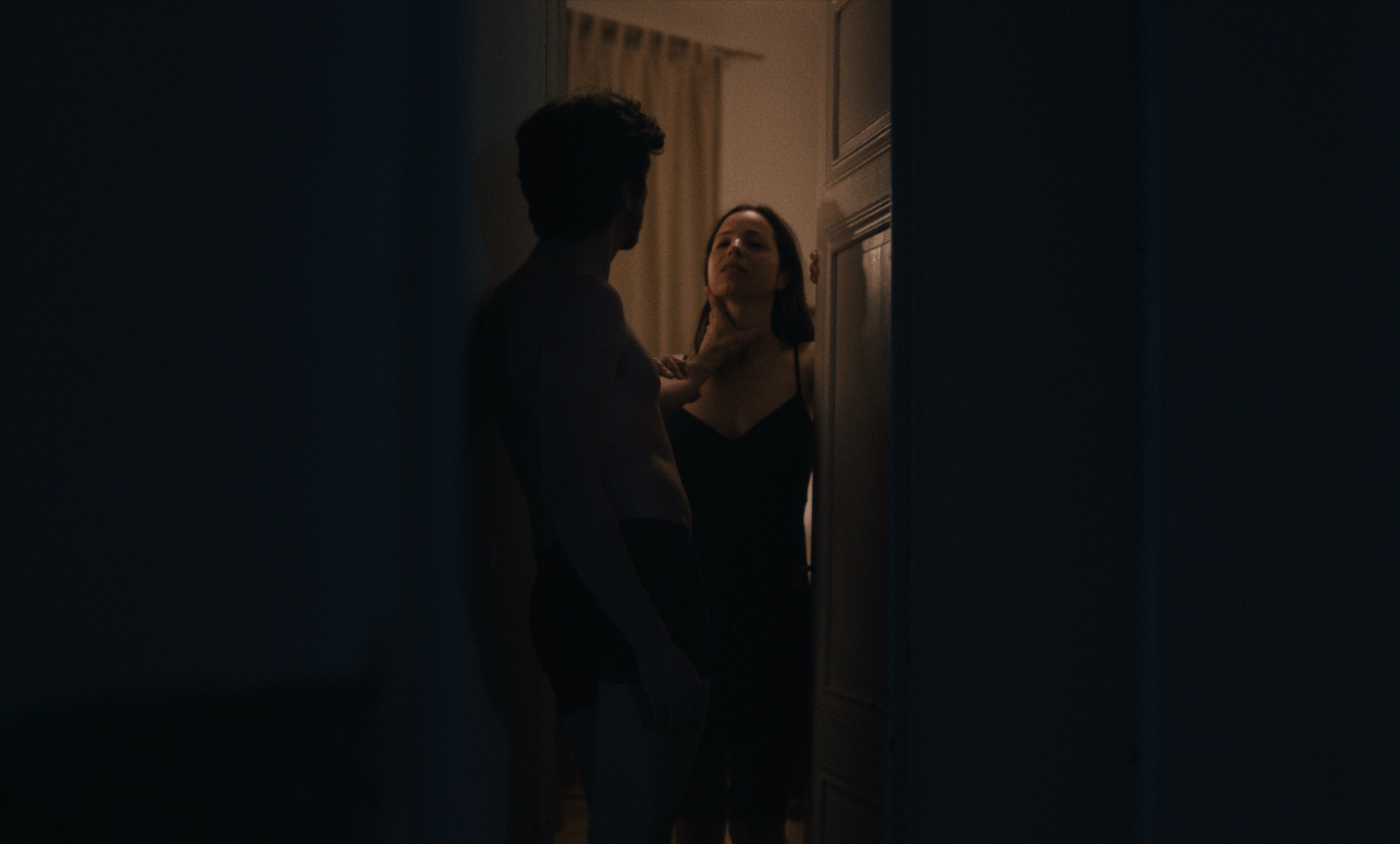 What is it about the horror genre that made it fertile ground for you to explore a young girl’s view of the world around her?

The horror genre was really inspired by my childhood nightmares and a desire to try and recreate the emotions and fears they provoked. I believe children have very dark inner worlds. When a young girl gets her first period, her womanhood is first defined by blood – we grow up with horror and gore! I think it’s interesting to see how female filmmakers today are using horror as a genre to express a unique physical experience of the world.

I needed to show multiple perspectives in the house, to create that ominous feeling of people spying on each other through doorways and halls, creating frames inside of frames.

The cinematography conveys a feeling of foreboding, even from that seemingly innocuous happy family opening scene, what guided your compositional and framing choices?

I was inspired by the composition in the Danish painter Vilhelm Hammershøï’s work, as well as photographs from Cindy Sherman’s Untitled Film Stills (1980). I needed to show multiple perspectives in the house, to create that ominous feeling of people spying on each other through doorways and halls, creating frames inside of frames. With my Director of Photography Vadim Alsayed, we focused on a color palette of green and red, representing repulsion, desire and danger, inspired by films such as David Lynch’s Wild at Heart and Victor Fleming’s The Wizard of Oz of course. We filmed with an Arri Alexa SXT and Primo lens to create a softer, more organic image, inspired by the childhood photos I had. We used the Panavision baby lens for the nightmare scene to play around with the image and distort the frame. The dance and forest scenes were shot on Steadicam. There were no digital special effects. The beef heart and dermatologist’s ‘brew’ were all hand-made effects on set.

The score and sound design perfectly amplify the film’s horror and mystical themes, could you tell us about building those?

I wanted to focus on the sound of breathing and whispering in order to create an atmosphere of transgression. For the music, we wanted a dissonant use of sound, using clarinet, strings and percussion. I started working on the music with my Composer Pierre Oberkampf almost a year before shooting because we needed the music on the day of the shoot for the dance scene.

I would definitely say it was an advantage to work on the music early on. It was an interesting way for me to start finding the tone of the film. Also, during the edit, my Editor Guillaume Lillo and I had about twenty different musical pieces that Pierre had already composed and sent us. But he would send us the tracks with each individual instrument ‘stream’, which allowed us to experiment, using sometimes only one or two instruments in a scene, instead of an entire ensemble piece. Having all this material allowed us to edit the film without ever using exterior music comps. We only used the pieces composed by Pierre which he then reworked for the final version. It was very exciting because we sometimes edited the film around the music instead of the other way around. I loved shifting things around and making the process more fluid. 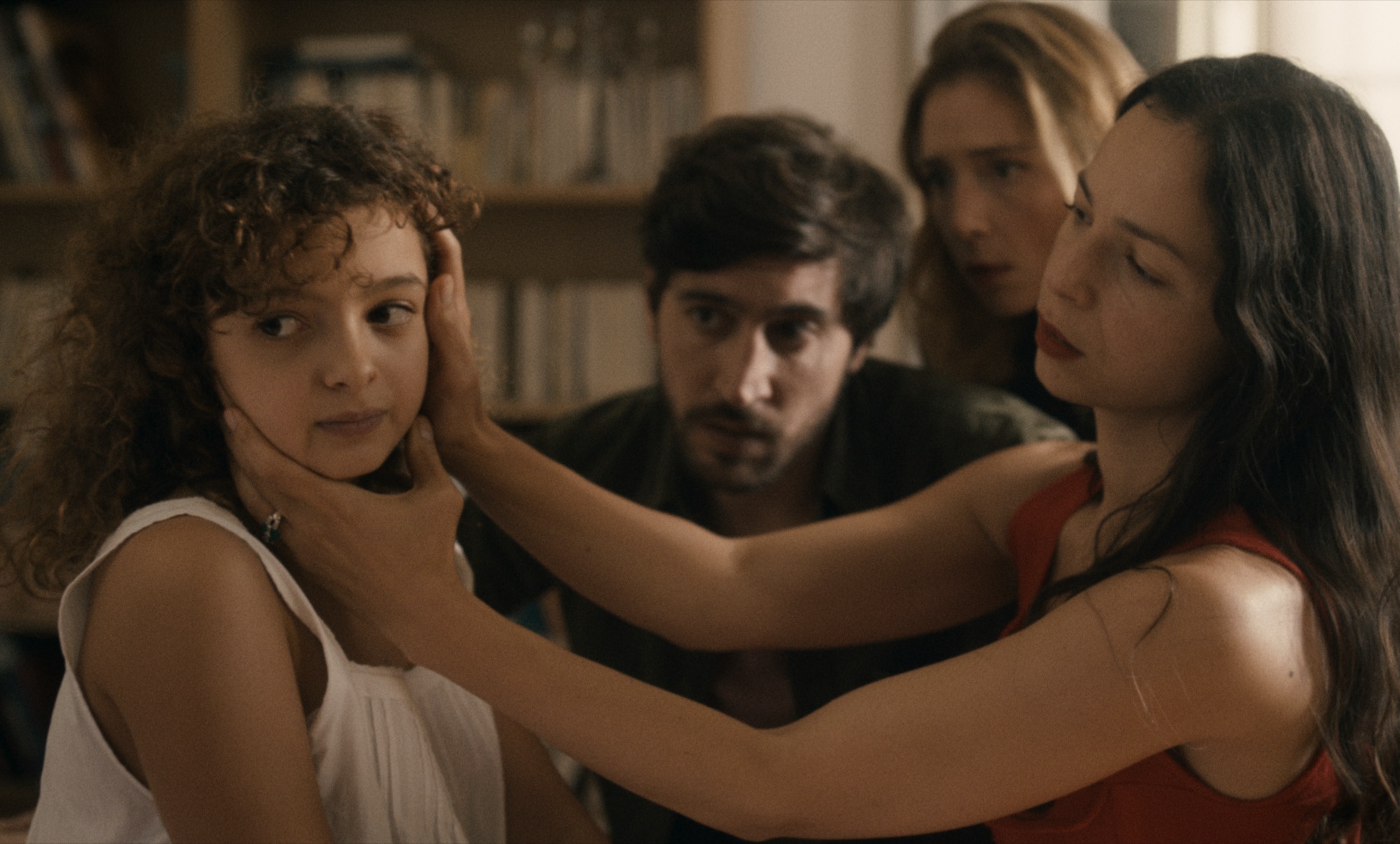 An aspect of Spell on You that I really appreciated is the way it presents a wide breadth of female representation, from the weaker through to the empowered.

It was very instinctive as I was inspired by the female figures of my childhood. I think the mother is a weaker figure, in the sense that she is unable to express herself in a relationship that she hasn’t completely chosen, yet she is also complicit in many ways. It was those ambiguities I wanted to explore. I think Salomé discovers the idea of empowerment through Dr Shalimar, the witch doctor who metaphorically passes on her powers to Salomé and makes her become aware of her own strength.

It’s about the expression of her rage, refusing to accept the adults’ silence.

Salome’s final dance spell is fluid and off-putting, how did you develop the choreography for that scene with her?

I rehearsed with Ines Mnafek-Amandio for almost a month before filming to choreograph the dance and nurture a relationship with her. Inès was a true collaborator in the creation of the choreography and created many moves. With Julien Gallée-Ferré, my choreographer, we focused on certain key references. I was inspired by Mary Wigman’s Hexentanz (Witch Dance), a dance solo from 1914, inspired by non-Western cultures that radically broke from traditional ballet and classical dance. It was revolutionary at the time because the dance was not about being graceful like a ballerina, it was about the dancer/choreographer expressing what boiled inside her like a sort of trance. 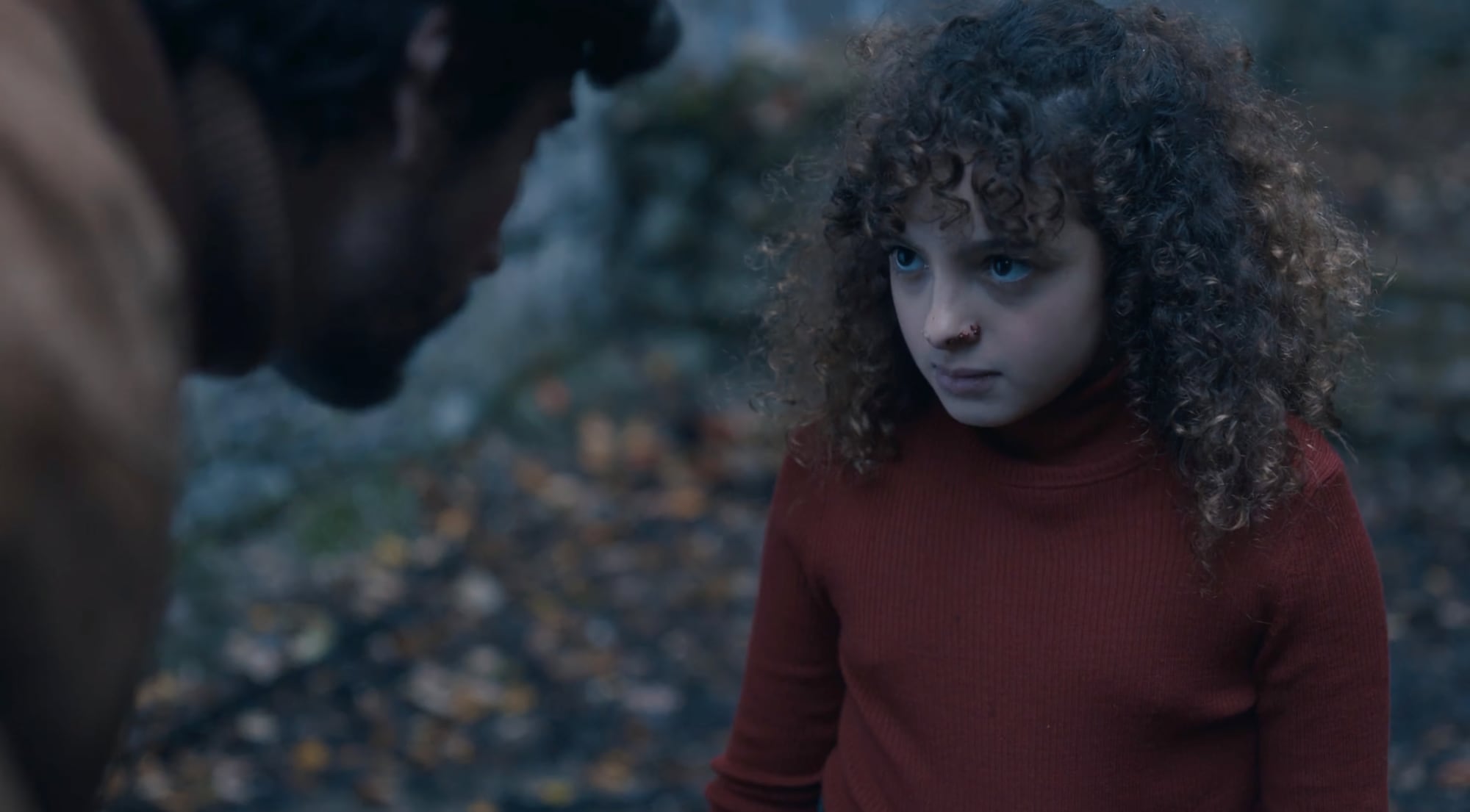 We also showed Inès images of haka, the Maori ritual from New Zealand, that is danced before going to combat, to impress opponents. It was important for us to create a dance that represented Salomé’s rebellion against her father. With Vadim Alsayed, my director of photography, we chose to film the scene like a duel or a stand-off in a western. It’s about the expression of her rage, refusing to accept the adults’ silence. When we shot the scene, I kept shouting “attack, attack!” and you can feel the rage inside her. I wanted her to feel like a young warrior. But the dance is also a moment of metamorphosis – as she defies her father, she also becomes a witch.

What new projects will we see from you next?

I’m currently financing my third short film which is already written and explores body horror through female sexuality, which I hope we’ll be able to shoot this summer. I’m also working on my first feature.