When it comes to an appreciation of the fashion film, we here at DN have always looked for more than the pretty people, pretty clothes tropes associated with the genre, but I doubt that any of us would have dared hope for a piece which transcends the form as masterfully as Ramón Ayala’s improvised meditation on enduring love, culpability and ‘otherness’, People Like Us. Which may have begun life as a fashion film, but traversed to an undefinable place of narrative elegance. We invited Ayala to share the journey with us.

Almost year ago now a friend living in Germany approached me to create a video for her street wear brand. She asked me to do something sci-fi like but when I started to write according to what she wanted every interest and obsession I had for the past few years came to paper. At the end of writing stage it was too ambitious for it to only be a promo tool. It had the entity of something weird and between genres. So my German based friend suggested I go for it. I kept the title to honour the chance. I found help with the production in Story: We Produce who were at that moment wishing to produce some creative content besides commercials.

It’s been a process of continuous metamorphosis from the first drafts to final edit. To me the whole idea involved this sentence: “1978 was crap and the future was going to fix everything”. A decade, from 1978 to 1988 in which the idea of the future was close and science fiction pulled people from the grey of everyday life. Science fiction as the idea of evasion and a vital manifesto. I like science fiction that ranges from cultural criticism to social commentary and that’s able to position itself aesthetically. It’s not the same as the hi-tech of The Matrix, the BBC series The Day of the Triffids, John Carpenter’s The Thing or Tarkovski’s Solaris. It’s not the same.

I knew that watching them talk would be hypnotic.

For me science fiction is about Daido Moriyama’s photos, the guitar solo in Marquee Moon by Television, the B-series movies by Jacques Tourneur, Anna Karina in Alphaville reciting Eluard, movies photographed by Vilmos Zsigmond, the heirs of the Grupo Memphis in the sets on the cheap American films of the eighties, the first Suicide album, the faces of Carl Theodor Dreyer’s films. A culture of subtraction. Working with minimal elements but in absolute terms. One way to generate abstraction around something. For this one I did steal for the final dialogue a passage from Saint Therese of Jesus describing her ecstasy. More sci-fi.

With this idea I recruited Annick Weerts and Kimberley Tell. I had previously shot them together in a music video for Spanish band, La Familia del Árbol. That film was one of the most powerful portraits I ever shot and was a lighthouse that led to the doppelgänger figure. I felt the need to see them interact more. I knew that watching them talk would be hypnotic so I wrote with them in mind. I wanted to use very abstract and absolute dialogue. I wrote them as if they were the last words someone would say. Like a statement heritage.

We shot with time on our side and let‘s say headwind. We were able to shoot in one of my favorite places ever, this rationalist house, kind of the mediterranean version of mid-modern century architecture named Casa Gomis by the architect Antoni Bonet i Castellana. The whole form of the house lead to some of the organic camera movements on which we write the film. Because it’s important to say that I understand camera blocking as handwriting. I even operate the camera myself in most of the shots. I did it to have the very same intimate feeling with the two actresses as we had in the two week rehearsals. Those days of text approaching were useful for cutting a lot of nonsense, not useful word material. We follow this cutting the unnecessary policy in every stage of the production. That’s why maybe the result is very abstract but full of information.

Our work is not to create a simulation of reality but something different, dreamlike… 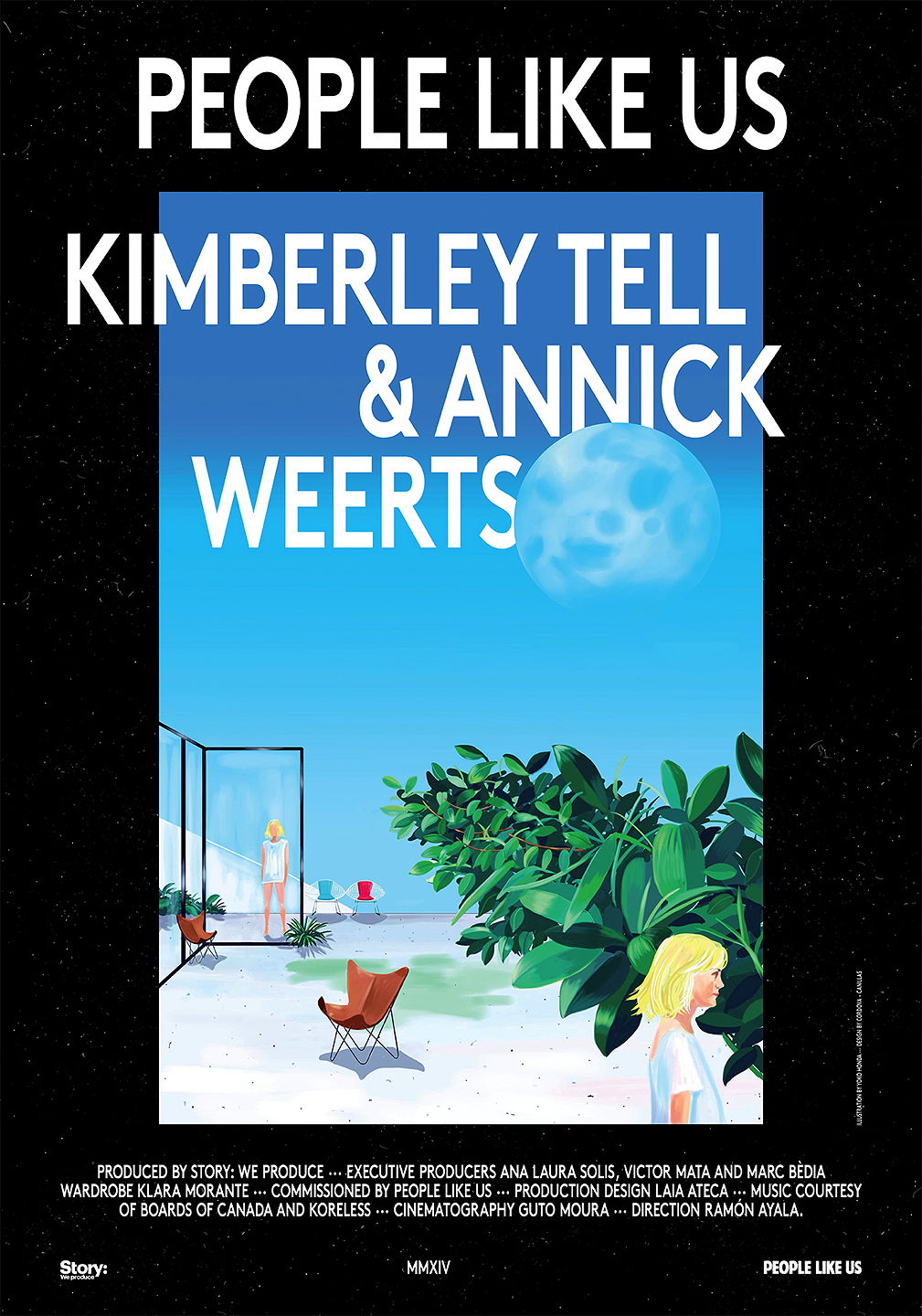 Guto Moura, the cinematographer and I decided to shoot on super 16 mm. Not because of its vintage feel but because we share the opinion that our work is not to create a simulation of reality but something different, dreamlike… We believe that if you do movies you’re creating something different from naturalism, and a different object needs to have a different surface and aspect. Needs to be perceived as another object. We were lucky enough to use Fujifilm stock left in some storehouse of Fuji’s. We used Fuji Eterna Vivid 250D and Eterna 400T for night. As for camera and lenses, Arriflex 16 mm SR3 and Zeiss Masterprimes. The camera was in a Fisher 11 dolly most of the time. Guto is very used to working with natural light but on this one he managed to have the most unreal and unjustified lights. His work is in the middle of a comic book, an eighties music video and the best of the seventies DOPs. He confessed to me later that he was watching a lot of Vittorio Storaro work at the time.

We shot for two afternoons and complete nights in summer at the mercy of the summer heat and the mosquitoes. The most defining moment of the process was the editing. We tried to break real time and use mind time instead. This film is something happening in the head of the characters and the brain doesn’t go lineal. Ariadna Ribas, the editor, was just in the editing team of Historia de la Meva Mort by Albert Serra, winner of the Pardo d’Oro in the Locarno film festival. She told me that she learned in that work to appreciate long duration shots and sudden cuts as a tool to create strangeness and mystery.

We were thinking on using tracks by Boards of Canada ever since the early stages because of its organic and rusty sound feel, combined with a more technological digital driven track by Koreless. The tracks fit like a glove and we where lucky enough that they agreed to let us use the tracks. There’s something in the water in Scotland… Finally the design studio Cordova Canillas with the Japanese digital artist Yoko Honda created the most beautiful poster for the film. They managed to capture in one image the out of time feel and the weirdness of this world without sacrificing their own style.