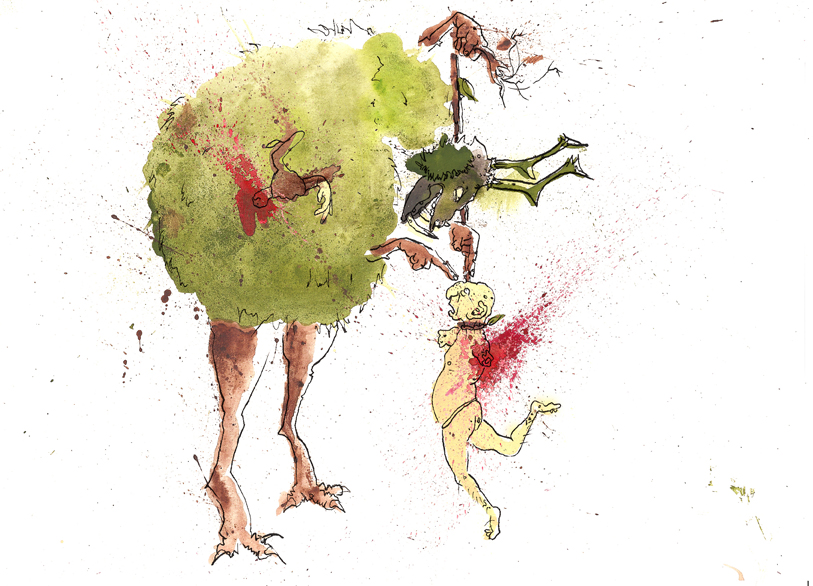 With the 2014 RCA show concluding at the end of June, we thought July seemed like the perfect time to catch up with some of the graduating animators from the college to find out a little more about their final films. As we stated in our round-up from the 2013 show every year students from the RCA turn out some of the most exciting and innovative short film work you’re likely to come across in the world of animation and every year we eagerly await a chance to see them. Unfortunately, we have to wait at least a year until we can actually see the final films appear online (we’re still waiting for the 2013 films to appear online), but in this series of articles we’ll give you an insight into some of our favourite films from this year’s batch – next up, Joe Bichard’s The Waldgeist & Me.

The last time we experienced the work of RCA student Joe Bichard, it was gleefully skipping around the screen contemplating death. Having originally caught our eye sometime ago with his wonderful tale of outer space exploration and exploitation MARS!, Bichard firmly grabbed our attention with both hands in 2013 with his colourful and playful tale of loss DEAD…. With his final RCA film about to enter the festival circuit, we spoke to the filmmaker after his graduation show, to discuss what themes he’s tackling in his latest work and how collaborating with others made it all possible:

The film’s tagline is Love and Dismemberment. Which I think sums it up quite succinctly. The concept originated from a character design project I was assigned during my time at Kingston University. Once the characters had been designed I drew them interacting and the basis of their (bad) relationship came naturally from that.

I originally wanted the story to be an illustrated children’s book. I then rewrote and expanded the narrative at my time at the RCA.

I suppose the story had been brewing inside my brain pan for about four years. I started storyboarding it when I found out I didn’t get into the RCA, in a sort of frenzied fit of republican angst. It turned out I was put on the waiting list and subsequently did get in and became a Royalist, so I put it on hold again until second year.

Once I had spent a month or so making an animatic I was fairly happy with, actual production time was about 6 months. I animated it in Photoshop. Which was great and shit at the same time. Greatshit. I then composited it all and did a few extra bits in After Effects. It was wild. Wildshit.

I use a lot of photo reference when making stuff. I made real 3D models of the characters heads which were invaluable when it came to animating them. Instead of working out what they might look like from whatever angle, I could just take a photo!

The main challenge for me was the project managing side of it all.

I had some amazing people do the amazing bits. But liaising with them all took up way more time than I had first anticipated, leaving me less time to animate things myself. But working with all the amazing people was awesome, so I can’t really complain about it at all. In fact, this ‘challenge’ was probably also the most enjoyable and rewarding part of making the film!

Oswald Skillbard designed and composed all the music and sound. We worked together so well on my first year film DEAD… that it was a no brain-panner to work with him again. And fortunately he seemed pretty willing to do so. I’m so happy with what he came up with. He searched far and wide for strange animal sounds to mix together to create the screeches and squawks the Waldgeist makes. And worked with the incredible Panos Ghikas to make the screeches and squawks the violins make.

It was also wonderful to work with Matt King. As I am a huge fan of his. We only had a small window of opportunity to get the narration recorded with him, so I was initially worried we wouldn’t get it all done. My trepidations were quickly swept aside as his first read of the script was pretty much spot on. Matt totally ‘got it’ and we were done after two hours! I also now have an extensive library of him making grunts, oofs and other miscellaneous noises.

I was also lucky enough to get some fine animators to help me with a few sequences. Loup Blaster, Joe Sparrow and Ferenczy Andras, to name but three. Loup even came over from France or somewhere and lived with me for like three weeks! Without these guyses help, the film would have been shit. I still have no idea how they did some of the stuff…