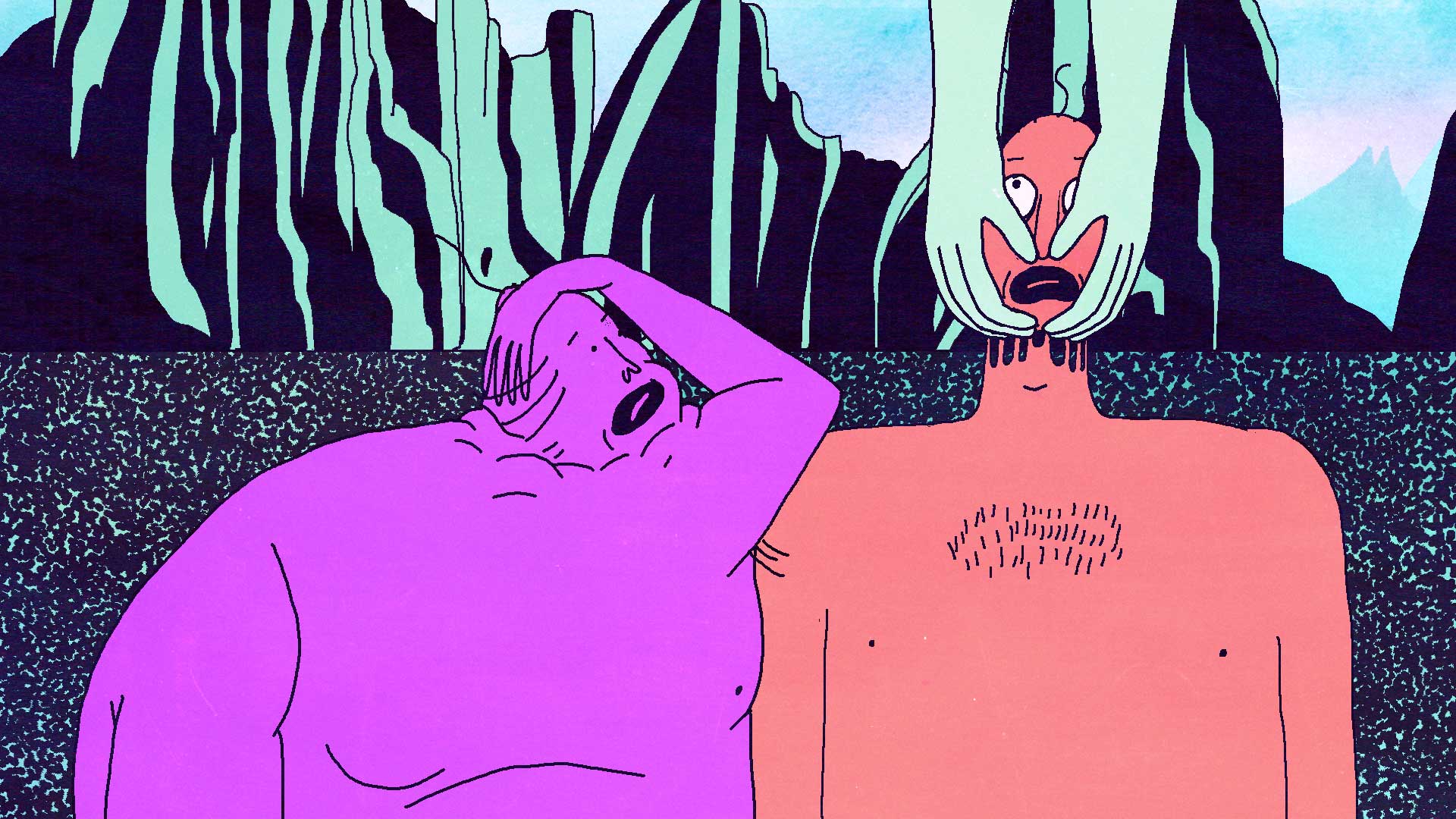 With the 2014 RCA show concluding at the end of June, we thought July seemed like the perfect time to catch up with some of the graduating animators from the college to find out a little more about their final films. As we stated in our round-up from the 2013 show every year students from the RCA turn out some of the most exciting and innovative short film work you’re likely to come across in the world of animation and every year we eagerly await a chance to see them. Unfortunately, we have to wait at least a year until we can actually see the final films appear online (we’re still waiting for the 2013 films to appear online), but in this series of articles we’ll give you an insight into some of our favourite films from this year’s batch – next up, Sophie Koko Gate’s Half Wet.

When we first encountered the work of Sophie Koko Gate in late 2012, her earlier RCA short Marcy’s Tenderloin filled us with a combination of fear and admiration [isn’t that what we all look for in short films?]. If you’re looking for unique and off-kilter – then you’ve just found it. Mixing an unusual and at times grotesque style, with bold colour palettes and fragmented narratives, her work takes you through the gamut of emotions across their short durations. With her RCA graduation short Half Wet continuing the style we witnessed in her earlier work, DN couldn’t miss a chance to journey into the headspace of this unusual filmmaker to try to understand where these films come from:

My film is about Gus, a 25 year old man with large pores who is trying to escape the realisation that he is very slowly evaporating, whilst pining over an ex-girlfriend who turns out to be incredibly dull.

I guess my idea came from a very early realisation of my own. A couple of years ago in Amsterdam my closest friend told me in all seriousness that she didn’t think I would age very well.

When we are born we are about as wet as a banana.

As I began to research how to slow down my own ageing process, I found out the aesthetic effects of ageing are mainly caused by the decline of water in our bodies. When we are born we are about as wet as a banana, 75% water, after a year that amount goes down to 65% and it decreases exponentially from this point until we die. This idea made me feel really weird. I thought it was weird enough to make a film from. Anxiety and lust are two themes that interest me. I think it’s really important to make films about things that you know, or have experienced (unless you are making a documentary).

Another important factor for me was that I wanted to introduce characters in the film that could be re-used in more films I make. The main character from my earlier film Marcy’s Tenderloin makes a cameo appearance in Half Wet. I like the idea of keeping characters alive in everything I make so that they can evolve alongside me.

My characters have become my friends, I’m afraid. My dearest little friends. 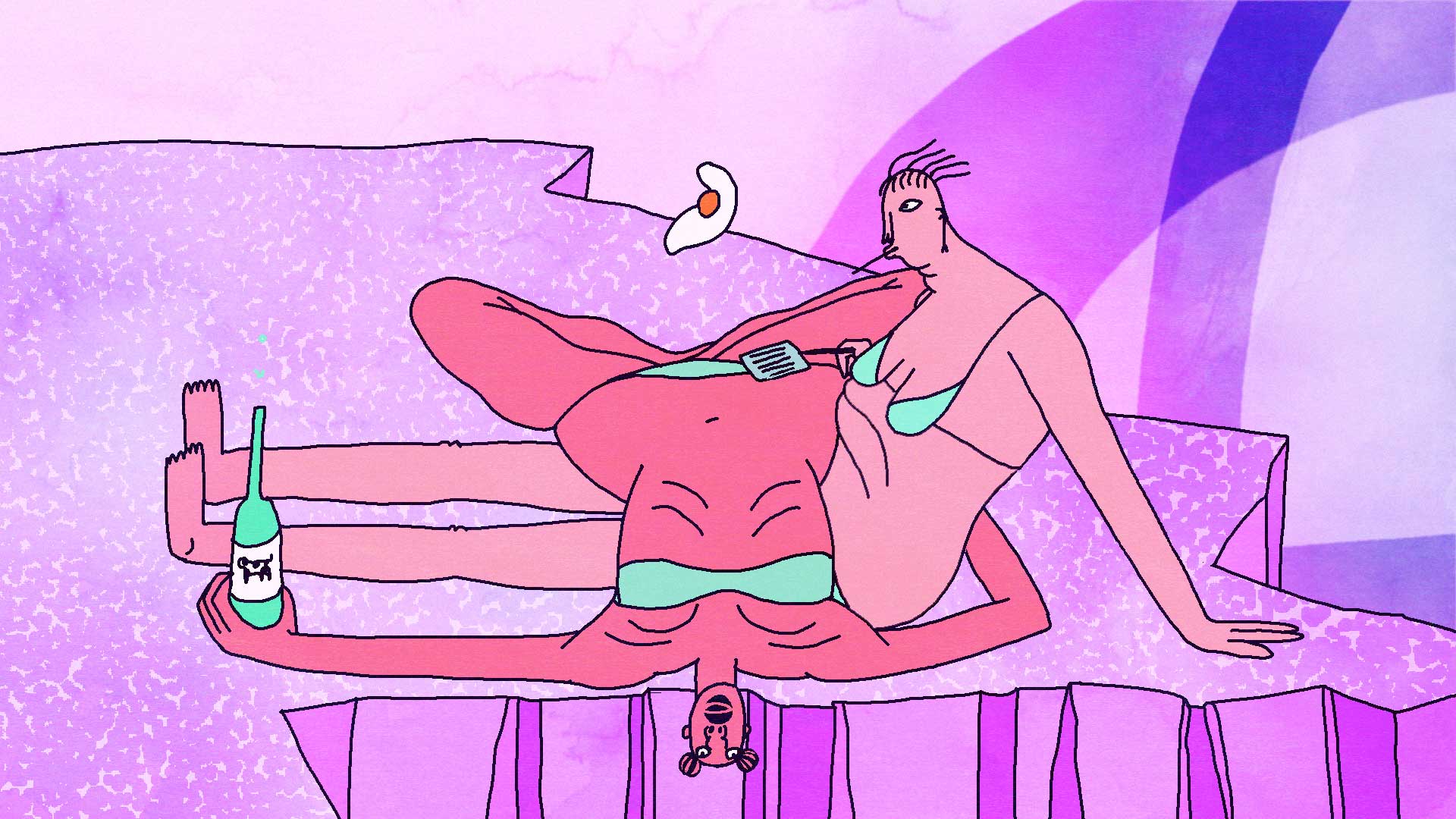 I had around 8 months to make the film. The first 3 months I spent script writing and researching. I had difficulty choosing between two scripts. The other idea being about a man who started to grow another face on the back of his head that was a lot more attractive than his original face, which followed a series of issues. One being that his girlfriend preferred the back of his head to the front.

This was clearly a reflection of a doomed ongoing relationship of mine. I decided to abandon the script.

I worked as spontaneously as I could by following a loose animatic and adding dialogue and ideas as they came to me. The actual animation took 4 months, I designed as I animated to keep it fresh, but it does mean that the design evolves slightly throughout the film. I tend to animate chronologically, which is unadvisable as the continuity slowly warps, but it allowed me to feel in control of the process. 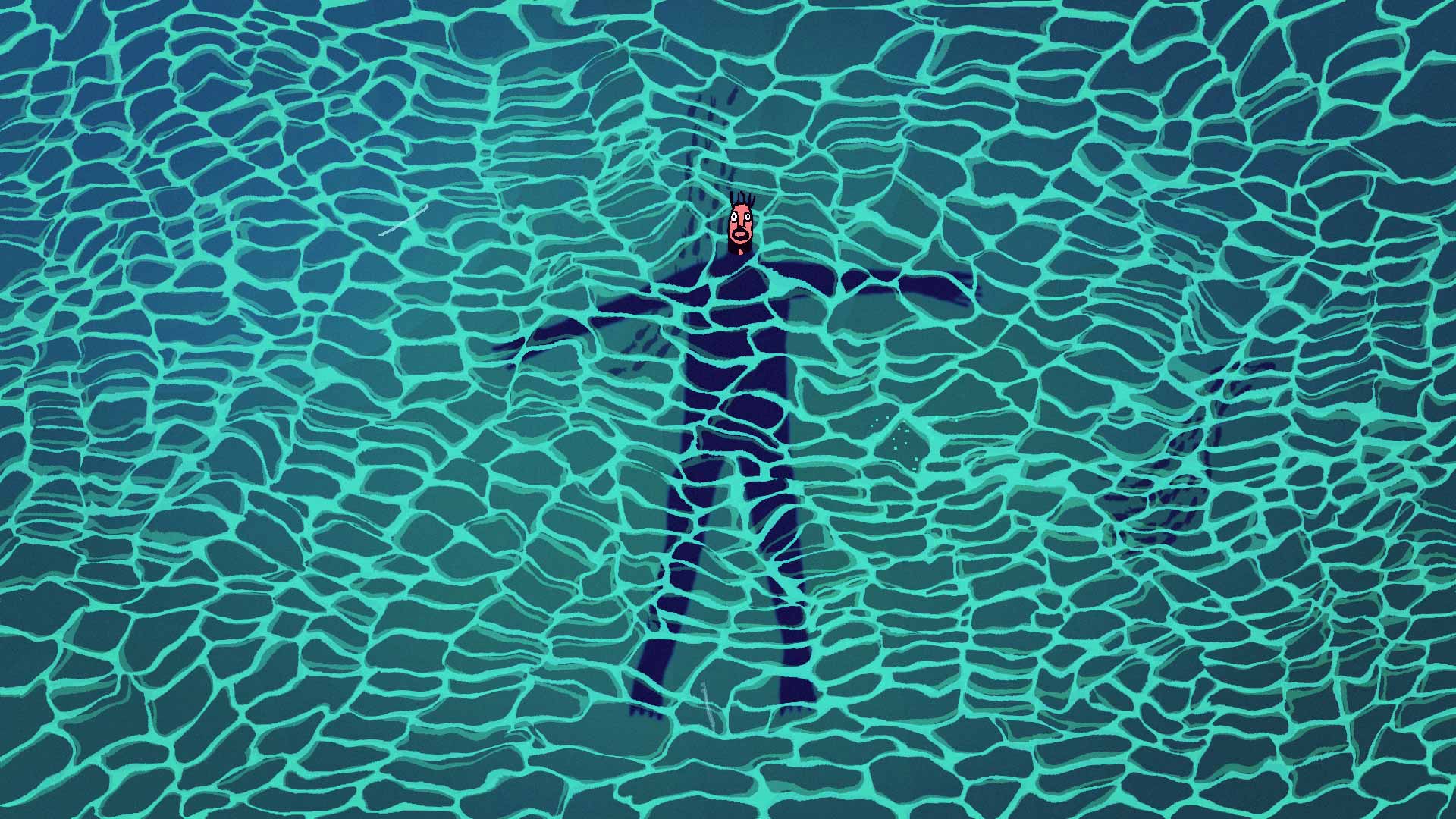 It was the happiest day of my adult life.

I designed it in photoshop, and also animated entirely in photoshop. This was thanks to Nicolas Menard who showed me how Photoshop ‘Video Groups’ could be used in the same way as Flash, but with the benefits of pixel based drawing and brushes. It was the happiest day of my adult life. The only downside to animating in Photoshop is the inability to scrub audio, there is a huge amount of dialogue in my film so I ended up roughing it in Flash and then importing it into Photoshop as a guide. It was all composited in After Effects and edited in Premiere Pro. I couldn’t have made the film without the constant encouragement I got from Rachel Sale and the mad animation skills of Rory Waudby-Tolley. The sound came from Johnny Wildey, A.K.A. Alphabets Heaven, who’s music I admired and felt could be translated into film. He is amazing. The next film in the series will focus on Caroline, Gus’s estranged German friend who sleeps with lots of straight women.