Challenging their students at Kyiv Academy of Media Arts to push themselves beyond their creative limits, Misha Koroteev and Alex Sobolev tasked their charges to devise a short narrative based solely on a single reportage image of a real event presented to them. Those with the chops to weave a compelling tale were given the opportunity to work with a production team to make their script into short film reality. The image of Barry Delaney wearing a dress to the funeral of his best friend, Kevin Elliott as photographed by Jeff J Mitchell inspired one of the winning storylines which was brought to life by Koroteev, Sobolev and their crew the following month. Koroteev tells us how they went about reimagining truth into gripping fiction in Partly Tired Slightly Dead.

We had a film storytelling course at Kyiv Academy of Media Arts and decided to make it really practical. We went through the concepts of screenwriting, then directors’ work, pre-production and the shoot. We went through the theory and than practiced on the specific project, which was Partly Tired Slightly Dead. It was a first time course, so we went through the ground work with the students, but they weren’t present on the shoot itself. This year we’re doing the whole thing again with every student taking part in the project.

We had two days for the shoot: the funeral scene and the desert scene. As you might imagine, there was no budget for anything whatsoever, which brought a couple of hiccups into the process. For example, we wanted the story to be about a British soldier, but we were told by our army consultant, that his squad would have the NATO uniform which is the same no matter what native allegiance the soldiers have. Which as it turns out wasn’t exactly true. So instead we have a British flag on the coffin, and American uniforms on the soldiers. We do still hope it doesn’t ‘yank out’ the viewers from the story. 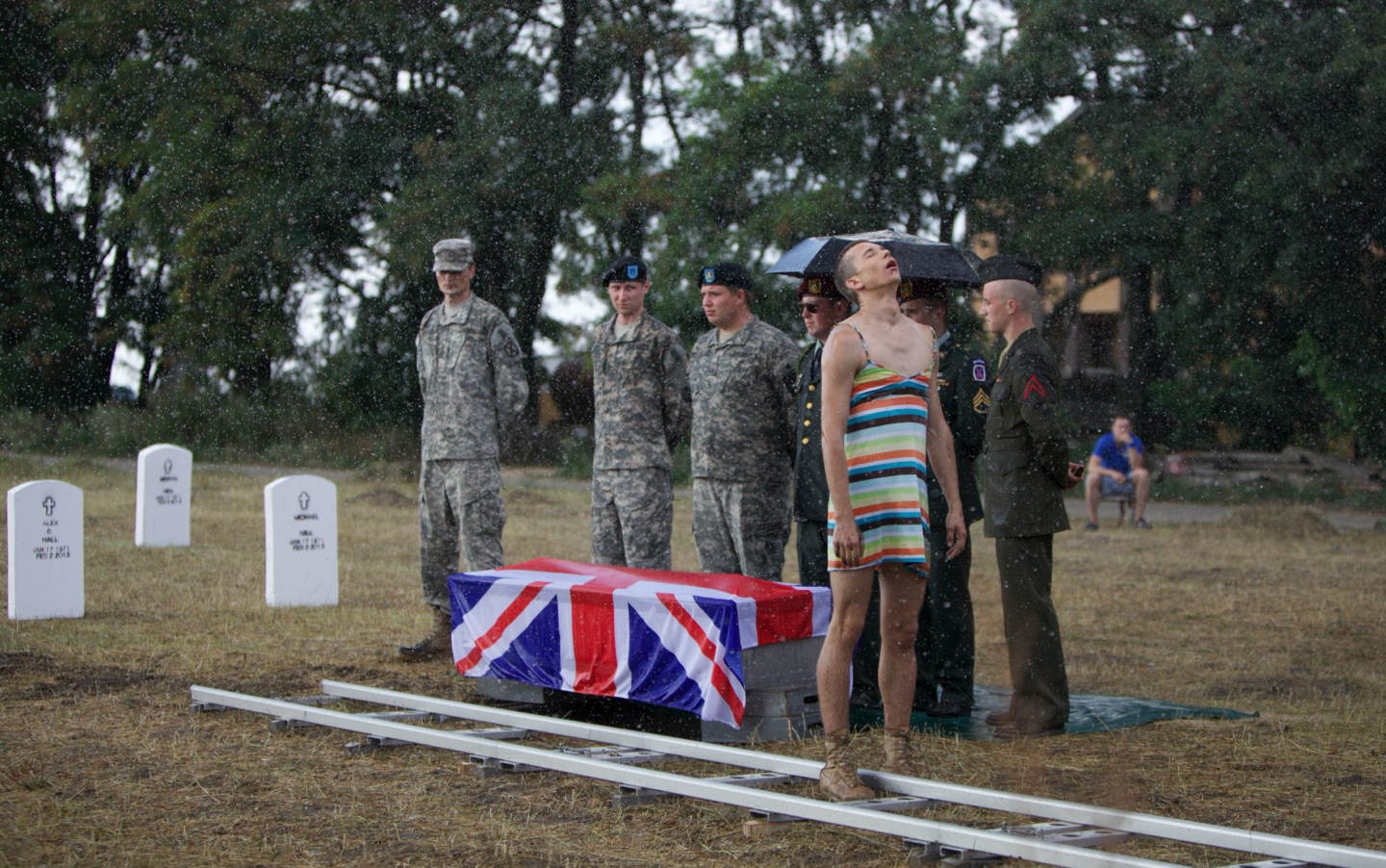 The funeral was shot entirely on a RED One MT, with Cooke lenses. Our friends from the Patriot Rental house were kind enough to give us all of the equipment for free. Alas the rain machine had to come out of our own pockets, which is why it looked like this:

The desert scene was shot not far from our city in what locals call ‘a sandpit’. Our post production team, had to work pretty hard to make it look like any kind of a desert. In the desert we shot mostly on the Blackmagic Cinema Camera, and we used the 5D Mark II for the drone shots.

We had some great young actors on the shoot, who were hungry for new projects, which meant that they were willing to do the crazy stuff we were asking of them, like stand around under cold water for hours on hand or run around on sand in full soldier uniform.

The whole project took us two day to shoot and we were working to get to the final edit for about 4 month. We wanted to make the first cut for the Sundance Film festival, and from that moment we kept working on making it better with our every shot for the next big festival, essentially sending each jury a new short, until we finally stopped and sent it to the Webby awards, which got us a People’s Voice Webby.