Plundering the sea of kitsch nik-naks to be found in car boot sales across London, Blink’s Noah Harris and Andy Biddle’s Salvation series of 8 interconnected films chart the epic story of the evolution of man to the sounds of Village Green’s roster of artists. Take a look at the Random Acts integrated edit of the films below and then read how the filmmakers went about creating stop motion magic from the detritus of boot sale bargains.

What was the initial brief from Village Green?

Noah Harris: The original brief was very open, it was to create a series of micro films in response to and in collaboration with, Village Green artists. But alongside that, it was a creative opportunity for us to explore further working with found objects, something we had touched on in previous projects together and with the help of Channel 4 Random Acts, turn it all into a short film.

Andy and I have worked together a lot, but this was the first time as co-directors. I came up with the initial concept, exploring 8 stages of evolution and the human condition. And then together we began to explore the potential narratives within each one. We defined those stages as:

A major part of the whole concept was that we couldn’t design the films first. The objects we found would drive the narratives, so each film would organically take shape over time. This why it was so important that it was Andy and I doing the car boot sales, rather than sending out prop buyers. We needed to make that initial connection with those objects. But it’s also why Village Green had to take a leap of faith as we couldn’t tell them exactly what would be in their films.

Andy Biddle: One of the great things about this project was the freedom we were given by Village Green. There were no binding preconditions on how each film should look. We had an idea of the sort of things we wanted but we also found a lot of other cool objects that were the initial inspiration behind certain shots.

For instance, we stumbled upon this amazing glass blue dog decanter which features in the both the 2 minute film and the film Decadence. We found that at a boot sale in Battersea and I remember the woman who sold it to us was actually quite sad to see it go. She said she wanted it to go to a good home. When we told her it was going to be in a film and that we’d probably film it with smoke coming out of its neck she was over the moon. Another object I remember finding was the bust of Hitler, something we didn’t account on finding at all! We obviously had to get it and it features in the film Oblivion (it’s in there but only for a couple of frames!) All these objects began to come together and start to tell their own stories and all we had to do was intertwine them with our existing ideas.

How specific was the list of desired items you had in mind when scouring the boot sales?

AB: We did have a vague checklist for each film and did also have some specific items we were after. The geode for example at the very beginning of the film was a specific must have and it was tricky finding one of those that worked for what we had in mind, but we got one in the end. With the other items, we looked for objects that were associated with the themes our of 8 films.

The films Life and Devotion were easy to find for as there is a never-ending supply of religious figurines and porcelain animal statues at car boots but other films were more difficult. For instance, I remember we went round in circles a little on what the objects would be for the film Industry. We both had similar ideas on how the film should look in the end but we struggled with the objects. At some point we found this amazing glass…something or other in Deptford market and I think that may have led the way in us choosing glassware for this film.

There is no digital trickery here.

NH: Of course, once you find an object you love, then you need to start looking for objects that will work alongside it. Every transition in the film is in-camera, and only made from found objects, so to get from object A to object B, you might need to find 4 in between objects… which meant things got trickier as time went on. Working in this way is very exciting though, as the project is in a constant state of flux, continually getting better, or taking you off on a new path when you find something you just can’t leave out. You’re not entirely in-control of where you’re heading – I like that slight feeling of chaos and exploration.

Did you devise any ‘rules’ to dictated the particular items and their progression in each section?

NH: We set ourselves some pretty foolish rules early on, the first two car boots we went to we decided we wouldn’t spend more than £1 on any object, and we didn’t come away with much, so we soon scrapped that one.

AB: Certain films were easier to buy for than others so the number of objects we had for Life for example massively outweighed the others. After a while we definitely stopped buying bird figurines. We had a lot of them and really didn’t need anymore. Since our budget was small we were generally aiming to buy objects that were around the £1-3 mark. There were obviously exceptions to this though and certain objects just had to be bought. Also, we generally sprayed a lot of stuff gold. This was more of a guideline than a rule though. 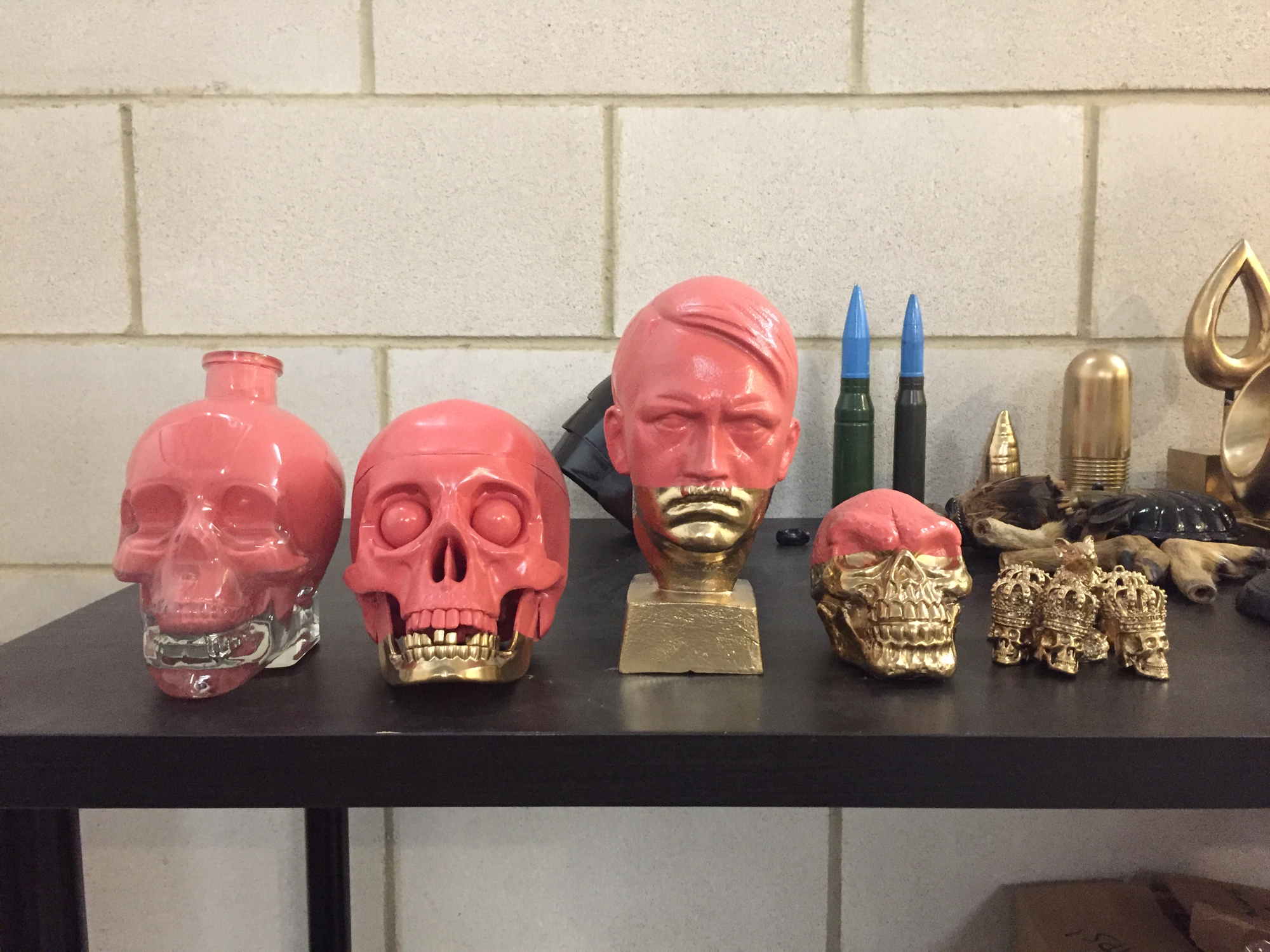 How were the in camera animations achieved?

AB: We put on a time constraint on doing a film a day. This didn’t always work out as each film was around 15 seconds long, which is quite a lot to do in stop frame in one day. The reason for this tight schedule was our budget. We obviously wanted the production value to be high and to do that we needed skilled animators and model makers, equipment, studio, etc. We had the brilliant Toby Howell to light this for us and he always gives it his all. On this occasion he even did the job for nothing. But unfortunately the other bits and pieces all cost money so we could only operate for a two-week stretch.

The animated metamorphosing of objects was all achieved in camera. There is no digital trickery here. Swapping from object to object smoothly so it seemed to morph was achieved using various methods. For example, we generally sprayed things the same colour. By making the objects the same in colour, the switching of them became softer on the eyes. I also made sure the object was moving when it changed into something else as this again helped to ease the transformation.

Another trick was to try and have new objects mimic the shape of the previous. For example to transform from the golden branch covered in porcelain flowers into the peacock, I simply had to move the branch in such away so that its shape began to resemble that of the peacock. In this example I even stuck a porcelain flower onto the tail of the peacock to hide the transformation even further. I generally employed all of these techniques to disguise the switching between objects.

NH: We shot for two weeks, across three units using 5Ds. We had a very basic moco tracker with pan and tilt capabilities. For the INDUSTRY film, our DP Toby Howell bought in practical rig whiz Max Halstead to build a big manually controlled camera rig from scaffold poles so that we could make that near 360º move over the rotating table. That was an incredibly tricky shot to achieve.

The whole idea of that film is that an eternal loop is achieved by shooting one rotation around the table. This footage is then flipped and reversed in post to form the flip side of the table.. it’s a little difficult to explain without demonstrating the technique… Anyway, we had to move this huge unwieldy bar 2º per frame to get the shot, with little room for error, or we wouldn’t get that perfectly looping rotation. When you can’t afford motion control you need to come up with very creative solutions.

The films remain mostly self-contained in the two-minute version, did you experiment with a more integrated cut at all?

NH: The aim was always to bring the films together to create one epic ‘story of man’. The loose plan was that we would allow the first 3 sequences – ELEMENT, LIFE and SENTIENCE to play out in their entirety, as there is a purity to those natural events and it makes sense to keep a true evolutionary flow. Then as soon as the mind of man starts to get involved, we could start to mix it up and introduce some chaos, so religion, sex, drugs, death, etc. become a confused miasma, a pretty realistic representation of the chaos of modern man I think 🙂 and then LAZARUS would be the serene finish, when things are again taken out of man’s control (or lack of).

We worked with editor Max Windows to explore how this would work, and yes, we did have various edits on the go, where we broke the narrative up more. However there is sense in the end result. It was planned to some degree, putting the subject matter of each film into context.

This isn’t the first time you’ve worked together, do you have any more collaborative projects planned?

AB: There will be more collaborations. We both have a love of stop frame animation and we both like to challenge the notion that something can’t be done in stop frame.

NH: This is the first time we have collaborated in this way, directing together, and it was hugely enjoyable… so it’ll definitely happen again.