Moving far beyond the snap judgements often levelled at those caught in the grip of addiction, Matt Genesis’ (last seen on DN here) heartrending music video for SONTALK authentically depicts the story of a young girl’s struggles to reach her father battling drug addiction. Genesis returns to DN today to reveal how the video was shaped by the personal memories and experiences of both singer and director, and why it was imperative that the video’s themes informed not just its content but also its visual style.

When I received the okay to begin developing my creative treatment, Joseph LeMay (SONTALK) submitted a document describing some very visceral memories from his childhood. The general tone was a mix of very happy moments and some moments on the other end of the spectrum. It was really incredible to work with someone so willing to be open about their own experiences. In doing this, the creative process started from a very pure place. We even went as far as using real home footage from Joseph’s childhood in the intro.

We were looking to create a narrative that honestly depicted what family life is like when a parent is struggling with addiction, especially from a child’s perspective. This was my first attempt at a more dramatic piece with family elements and to be honest I was very nervous about those scenes being cheesy or misrepresenting the story. I desperately wanted the film to be moving and visually beautiful. I decided the best way to go about this new venture was to be brutally honest about my own feelings and experiences in regards to addiction and mental health. This thinking helped to inform my decisions about camera movement, color palette, story, etc…

It was important to convey the idea that people struggling with addiction aren’t just “drunks” or “junkies”. They are oftentimes good people who desperately want to stop disappointing their families. We decided to take an approach that utilized surreal and intimate moments to visually depict our character’s emotional states.

After the initial inspiration, a lot of the scenes and story came about organically. For instance, the use of the double dolly was specifically selected for 3 scenes to convey the idea that the daughter was along for the ride and unable to control her future – this is often the case with children of addiction. I came up with the idea of a car crash in conjunction with this idea. As it turned out, a similar event actually happened to someone in Joseph’s family. It was an interesting coincidence that I think comes about when you’re on the same wavelength artistically – we obviously had to go with it.

This was my first time working with the production company, Kobamm Productions, and the record label, Sony Masterworks. Luckily, I was able to bring on the team I’ve been working with consistently for a while now. I’ve found that I really enjoy working with the same people. You’re able to build on your creative process vs restarting from scratch for every project.

It was really incredible to work with someone so willing to be open about their own experiences.

Two new additions to the team were Producer Alex Kohnstamm, and Producer/AD Ben Robertson. The logistics were extremely ambitious. I asked for a lot and they delivered. Ben even sacrificed his car for the rig/crash vehicle. He went as far as to spin it out and into a snow embankment to make the crash plates more realistic. I am super grateful for their dedication and enthusiasm during the entire production process.

I think it’s worth noting that Joseph (SONTALK) played the father. This was his first time acting and I’ve got to say, he did a really nice job. Every acting decision came from a place of connecting with the audience further and telling an honest story. It was a really engaging experience on set and I am glad he was up for the role. 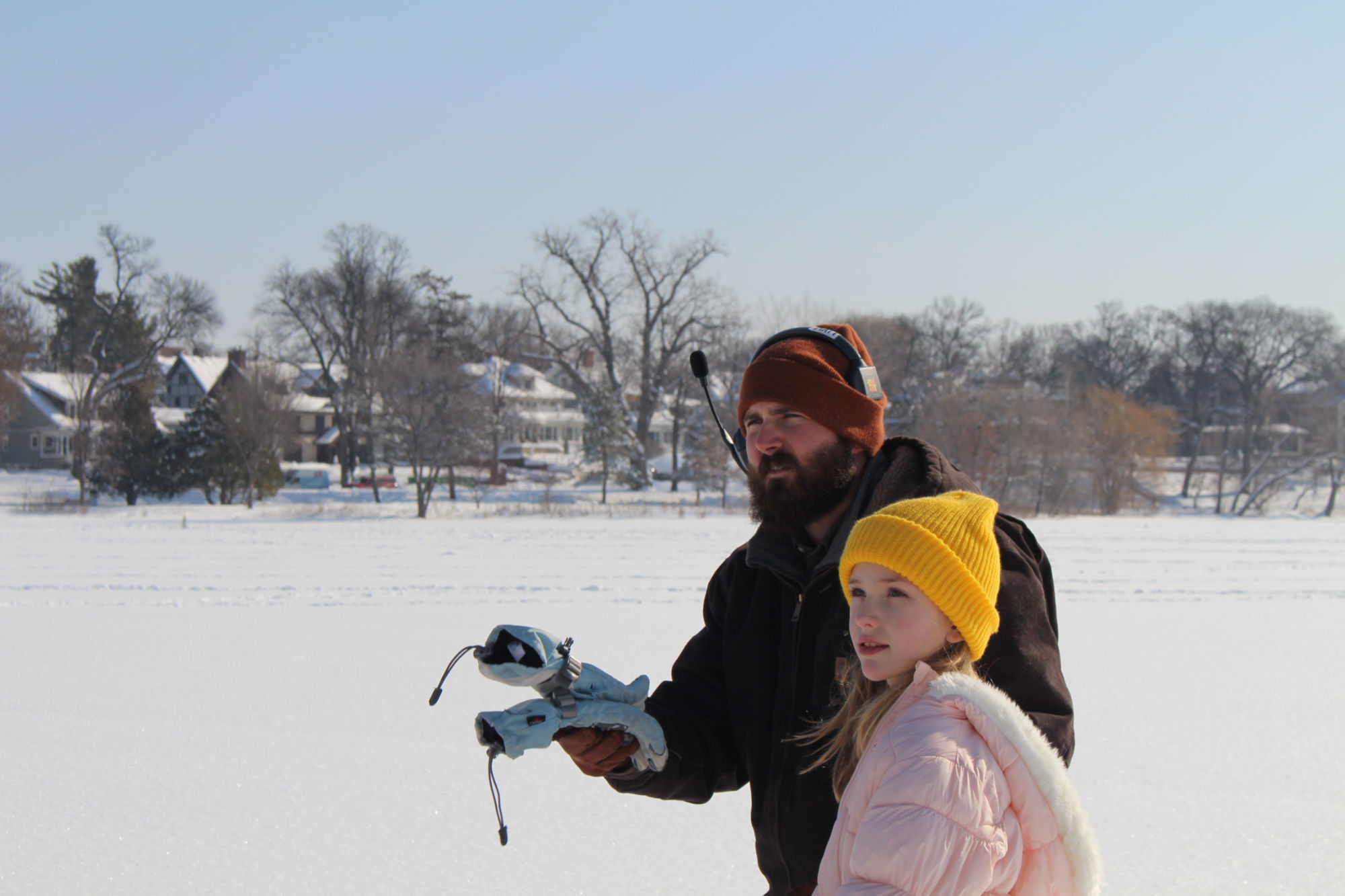 The daughter role was played by Violet Saxton. I’ve worked with her a handful of times now and I am always impressed by her focus on set at such a young age. She will be someone to look out for if she decides to continue with acting. We always joke around, saying we found our Natalie Portman from The Professional – a fantastic film and performance if you haven’t seen it.

The mother was played by Brittany Benjamin. Again, I was impressed. She really brought a lot of emotion and nuance to her scenes. This was my first time working with her. She’s a director in her own right, so she really understood what we were trying to capture and I think the result was very effective because of her background behind the camera.

I brought on my good friend and long time collaborator Marcus Taplin as the DP. There were a lot of technical challenges to consider on this one: putting a light on a drone, a car crash, and an underwater scene, to mention a few. We shot on the Arri Amira and Leica R vintage primes. CineMechanics, a Minneapolis local rental house, set us up with all of our camera needs. If you’re ever in the Twin Cities, they’re the best place to go.

The time constraint really put us in a crunch. This was a jam packed two day shoot. His ability to light spaces vs shots so that we could move freely, for the most part, within them was a huge factor in this project’s success. As always, he’s super sweet with the light and a great collaborator to have on set.

A funny issue we ran into: ALWAYS DO A TECHNICAL SCOUT. We were short on time so we decided the pictures of the Air BnB were enough to go on. Marcus and I are both pretty good about gauging what lens an image was shot with and the location photos looked great. We planned on arriving two hours beforehand on the day of the shoot to scout and map our shots for the day… “What is this? A center for ants?!” The location was, to put it nicely, very small. It was also on the second story of a duplex – a narrow winding hallway with the steepest stairs imaginable led up to a door too narrow to fit the dolly we selected or the size of track we had on the rental. Luckily, the team handled it gracefully and we were able to make the necessary adjustments. Also, did I mention there was a blizzard outside?

Olivia Spitz! Holy smokes, what a dream to work with. I swear she time traveled, bought an entire catalog, and brought it to set. We wanted to have the film be 90s inspired, Joseph’s actual childhood years, without going into a full period piece. I made it particularly difficult for her because of the number of wardrobe changes. I didn’t want the film to feel linear and it was important to the narrative that this was over a series of months. We needed to convey a bipolar lifestyle as people get better for a little while and then slip back into depression or addiction. This at times can be an endless cycle and very hard on family members. There were also certain selections on set that helped to subtly show how much the daughter looked up to her father – the same boots, styling with hats, etc… I am still in love with the coat from the merry go round scene!

It was important to convey the idea that people struggling with addiction aren’t just “drunks” or “junkies”.

I did the editing and color myself and brought on Tom Coben for the VFX. I think he really did a nice job and I was particularly excited about the underwater profile wide. I had wanted to incorporate that shot in a project for a while and it was really cool to see it come to fruition.

Overall, I was really happy with the experience. I think it was one step closer to realizing a vision fully and we created something to be proud of. I hope this film connects with individuals that have been impacted by mental health or addiction personally. It’s something that needs to be addressed as we move into the future and I am thankful to have been trusted with such a personal project. SONTALK is a real artist – you can check out more of his work at sontalkmusic.com.

My short film Merger will be finished up soon and boy is it a weird one. I am extremely excited to do a festival run with it and see how it’s received.

The Ones Who Breaks Your Heart is one of the many great projects shared with the Directors Notes Programmers through our submissions process. If you’d like to join them submit your film.